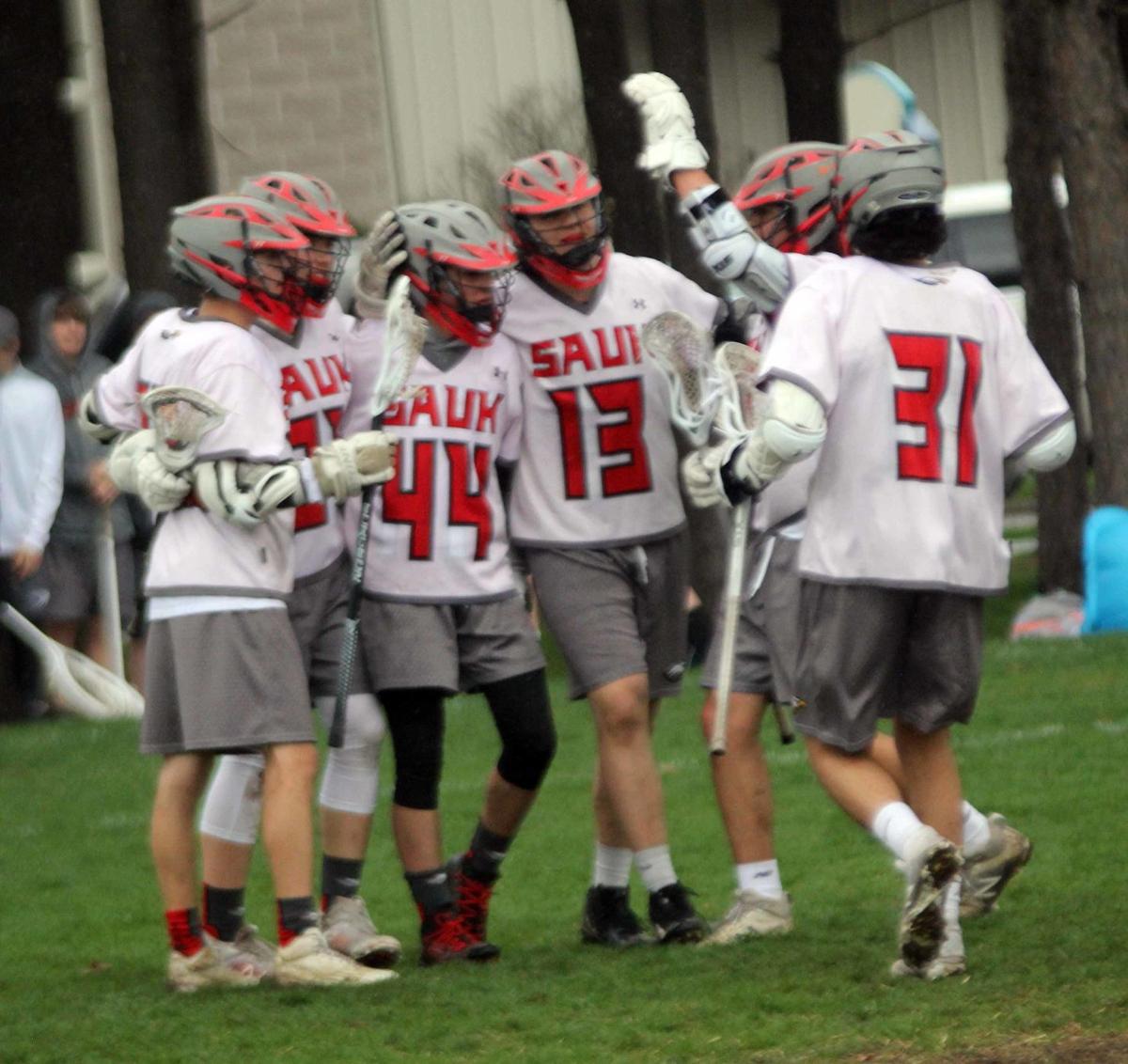 The Sauk Prairie lacrosse team surrounds Drew Marshall (44) after he scored a goal during an April 25, 2019 home game against Madison Edgewood. 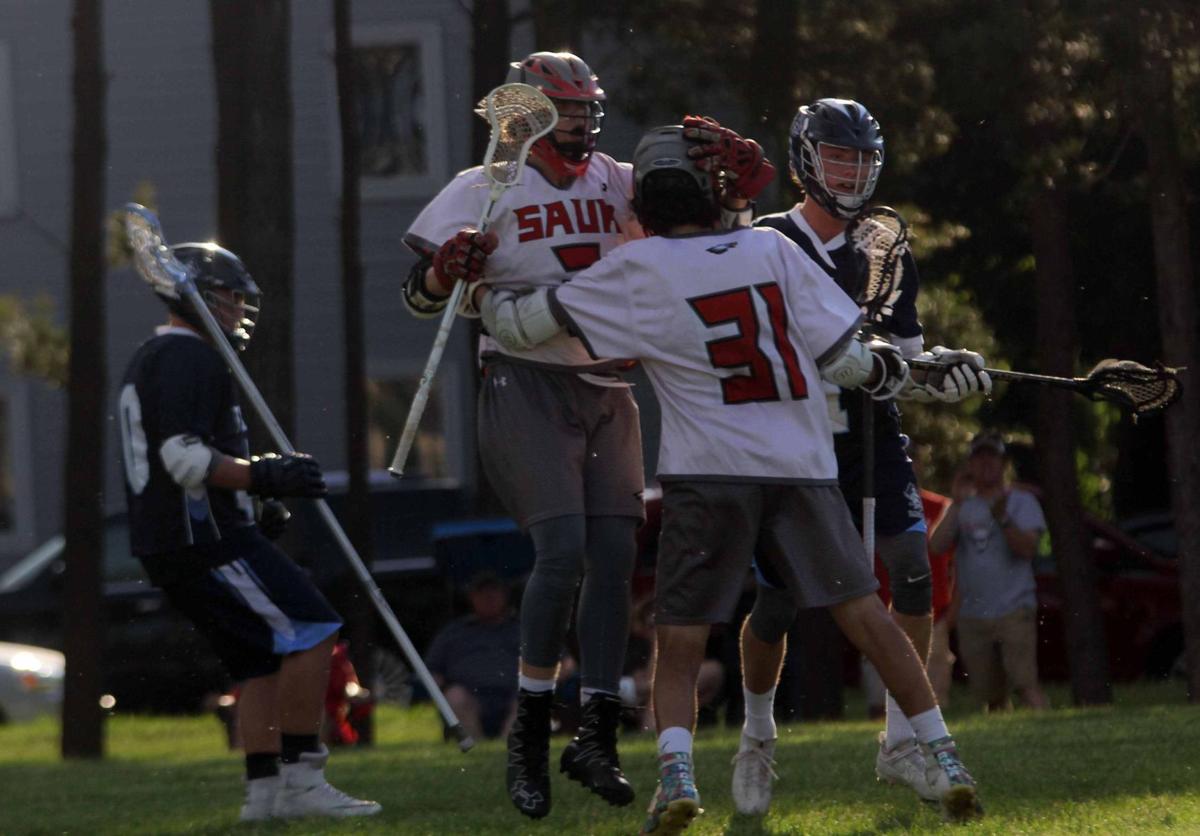 The Sauk Prairie co-op's Riley Jelinek (left) and Cam Logan (31) celebrate Jelinek's goal during a home playoff win over Bay Port on May 31, 2018. 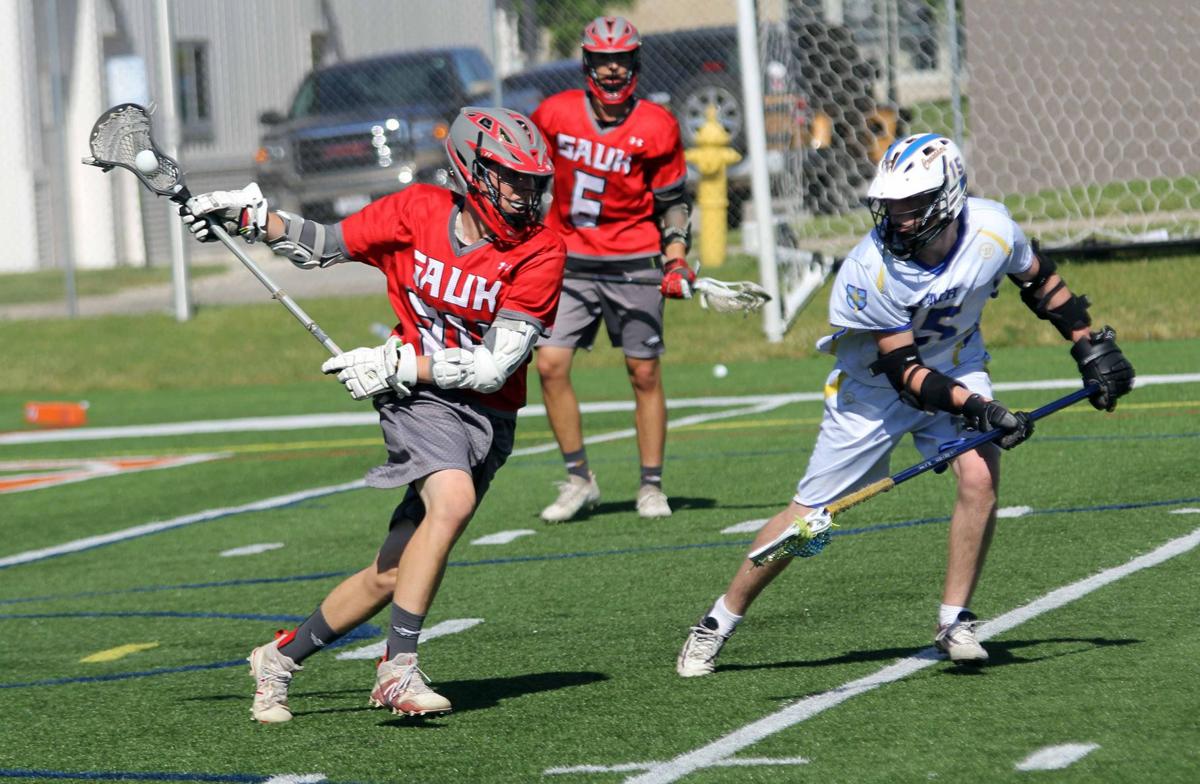 The Sauk Prairie co-op's Willy Hanson had two goals and three assists in the state championship win over Waukesha Catholic Memorial on June 10, 2017. 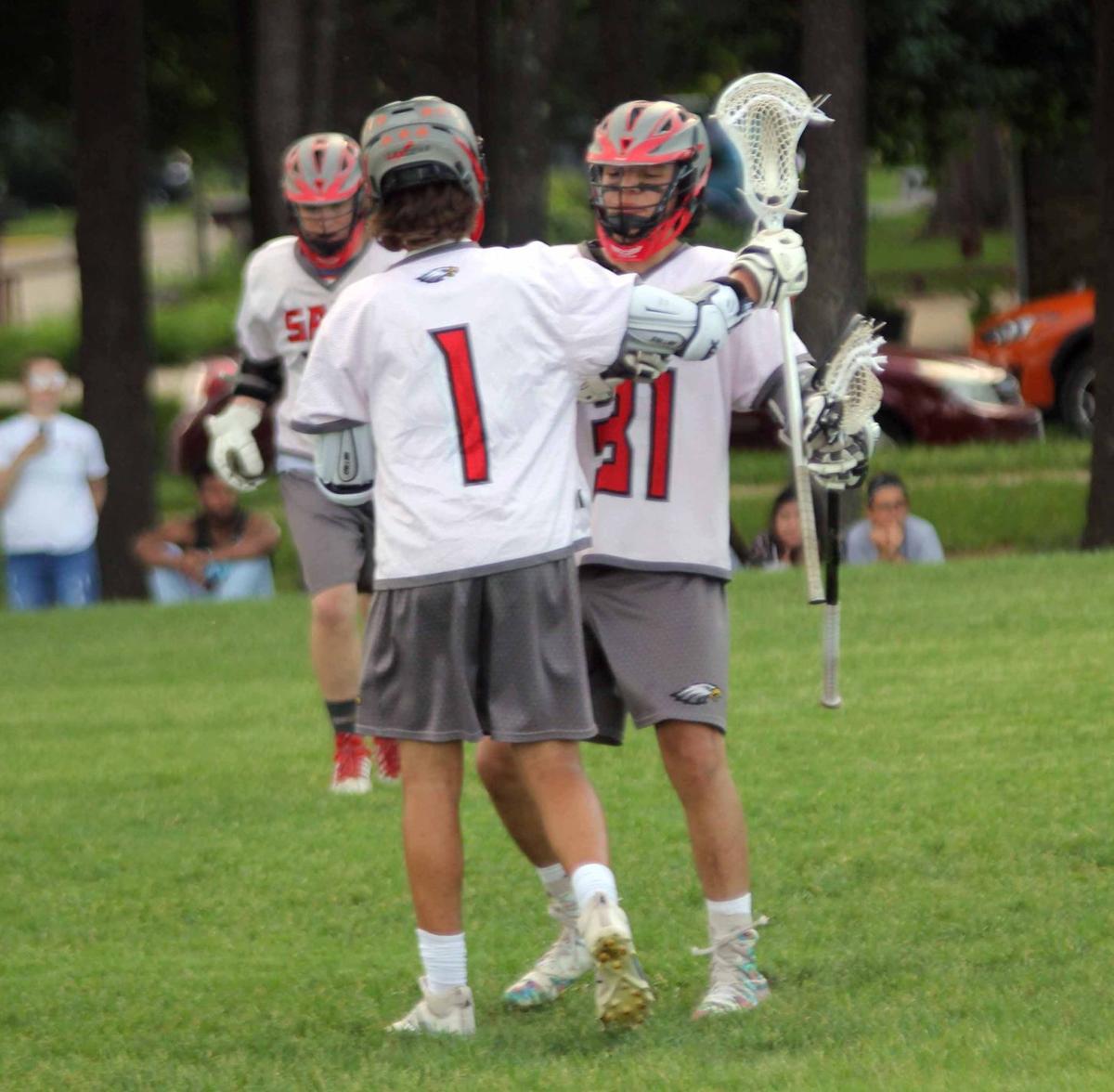 The Sauk Prairie co-op's Dylan Oas (1) and Cam Logan celebrate a goal during a home playoff win over Bay Port on May 31, 2018.

The Sauk Prairie co-op prep lacrosse team had years of chemistry built up.

The Eagles were returning every starter from the 2019 team that reached the state quarterfinals. And they had a deep crop of seniors intent on getting back to the top of the mountain after being part of the 2017 state title team.

But they never got a chance to put that experience and motivation into practice, as the COVID-19 pandemic suspended the 2020 season before the Eagles could take the field.

“I told these guys at the first day of practice that this could be your last stamp on high school sports,” Sauk Prairie head coach Dylan Baier said March 12, just before prep sports were shut down across Wisconsin. “To miss out on that would be tough. Especially for these guys, this group of seniors is ready to go out and dominate.”

It was a tough blow for a team that was champing at the bit since the fifth-seeded Eagles suffered a 12-9 loss at fourth-seeded Hartland Arrowhead in the 2019 state quarterfinals.

“I got here my sophomore year and we’ve accomplished basically everything we can except for getting the conference championship belt in our hands and then, of course, state too,” senior captain Cameron Logan said. “That’s really all I’m looking for.”

To take that next step, the Eagles spent their early-season practices rolling out a new system they thought would be a better fit with the players’ skill sets.

“I think on the bus ride back from Arrowhead, I was texting the assistant coaches saying, ‘This is what we have to do. We have to change what we’re doing and how we prepare,’” Baier said. “It was basically an entire offseason of preparing, coming up with this new offense and new defense, and really leaving no stone unturned. That’s kind of my message to the guys, we’re going to do everything we possibly can to make sure that we’re successful. ... It’s a much more complex offense, but I still like these guys playing with freedom because they’re the best lacrosse players in the state.”

The Eagles were going to put that to the test.

“It all starts with how I set our schedule up for next year,” Baier said after the 2019 season. “We will have one of the toughest schedules in the state and likely head out of state to play some higher-level teams. These kids will run through any wall I put in front of them. We’re extremely determined to win it all next year.”

They were set to open the season March 17 at Mukwonago, followed by games against Waukesha West, Stoughton, Hartland Arrowhead and Waunakee. Sauk Prairie was scheduled to host reigning state champion Kettle Moraine on April 25, as well as runner-up Middleton on May 5. The Eagles had the talent to navigate that schedule. Five returners were All-Badger Conference selections last year, led by Logan, the conference player of the year.

“Cam has a unique skill set,” Baier said of Logan after the award was announced. “His stick skills and finishing abilities are the best I’ve seen in a long time. Cam always draws the best defender and I believe a lot of the other coaches have a lot of respect for his game. If he’s allowed a second of free space to shoot or dodge, he’s taking it.”

Logan and Riley Jelinek, a first-team, all-conference midfielder last season, showcased the chemistry that built up throughout the Sauk Prairie roster.

“Cam and Riley can almost telegraph where each other will be at any given time,” Baier said last season. “Watching them play almost seems like they have some sort of cheat code on the field. They work so well together and their skill sets compliment each other so well.”

That level of chemistry develops over time. Logan, a Baraboo student, says he always feels comfortable when spring comes around and he rejoins his Sauk Prairie co-op teammates, many of whom he plays hockey against in the winter.

“It’s such a good group of guys,” Logan said during that May 12 practice. “The hardest part is to build your actual team and figure out what you want, but we’ve got the guys we want and we’ve had the guys we want. The hard part’s taken care of. I just love playing lacrosse with these guys.”

“We only lost a few people,” Jelinek said. “So everybody knows each other and we’re just coming back as a full group. ... Not needing to meet everybody and just knowing a whole bunch of people coming back just helps.”

Talent also helps, and the the Eagles had plenty of it. Hanson, who had two goals and three assists in the 2017 championship game, was a second-team, all-conference attackman last year, while junior Dylan Oas was returning as a second-team midfielder and junior Hunter Walz as an honorable mention defenseman.

The Eagles were hoping to put a cap on a successful 2019-20 school year that included Badger North Conference titles for the boys soccer, boys cross country and boys swim teams. The football team also reached the WIAA playoffs for the first time since 2007, while the boys hockey team — led by many of the lacrosse players — went 21-5-1.

“We have a good class, but it’s just that everybody cares so much and puts effort in at all times,” Jelinek, the state’s leading scorer in hockey the last two seasons, said of Sauk Prairie’s success. “It’s good to see for Sauk, because we haven’t been the greatest the last couple years, so just having this class and everybody working hard for everybody around them helps.

“I think it’s just working in practice like you’re playing a game. Practice is where everything starts, and then it just transfers over to games.”

“Recognizing the opportunity that we have is a lot more apparent this year,” Logan said of the Eagles’ mindset in March. “You have to give it your all, because it’s the last chance you get, and the best chance you get. I think that in itself builds the team motivation up as much as it is now.”

That Class of 2020’s motivation will go unused, but the Eagles are working to pass it along throughout a program that has been among the state’s best for years.

“We’re trying to include JV in a lot more we’re doing as a varsity program, so we’re bringing a lot more JV players into varsity games and stuff like that, so that when this large senior class is gone next year, the younger kids have a sense of what it takes if you truly want to be at the top,” Baier said, noting that the Eagles had 47 kids in the program and two JV teams this year. “It’s not fair to them for us to just expect that they’re going to get into those roles and succeed. It takes many years of work and leadership and working together to do that.”

“We see each other a lot outside of sports, and a lot of these guys play hockey together and whatnot,” Elsing said of how the veterans hoped to pass their chemistry down to the younger classes. “Just try to set an example as one of the older guys and one of the guys that knows what’s going on. Just trying to be a leader for these guys and inspire them a bit... provide encouragement to go and do the best they can.”

The Sauk Prairie lacrosse team surrounds Drew Marshall (44) after he scored a goal during an April 25, 2019 home game against Madison Edgewood.

The Sauk Prairie co-op's Riley Jelinek (left) and Cam Logan (31) celebrate Jelinek's goal during a home playoff win over Bay Port on May 31, 2018.

The Sauk Prairie co-op's Willy Hanson had two goals and three assists in the state championship win over Waukesha Catholic Memorial on June 10, 2017.

The Sauk Prairie co-op's Dylan Oas (1) and Cam Logan celebrate a goal during a home playoff win over Bay Port on May 31, 2018.