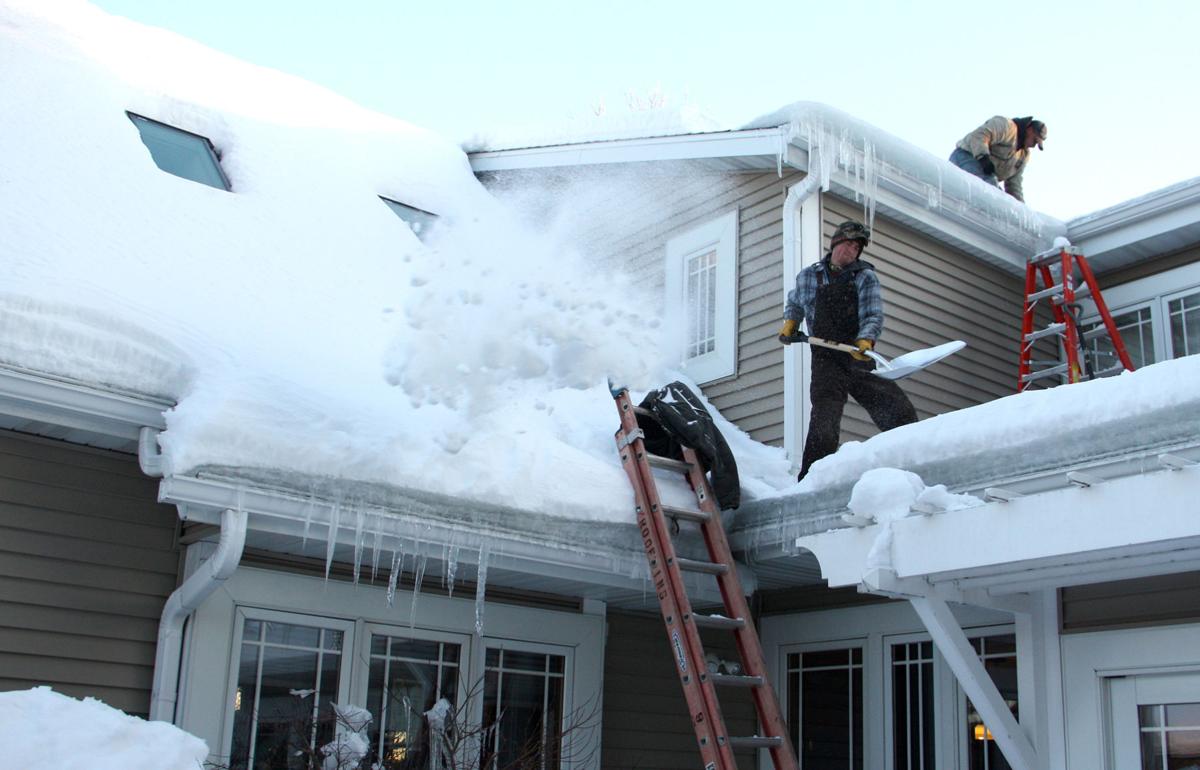 Zach Frosch with Frey Construction and Home Improvement clears a Madison home of snow in preparation for melting its ice dams last week. 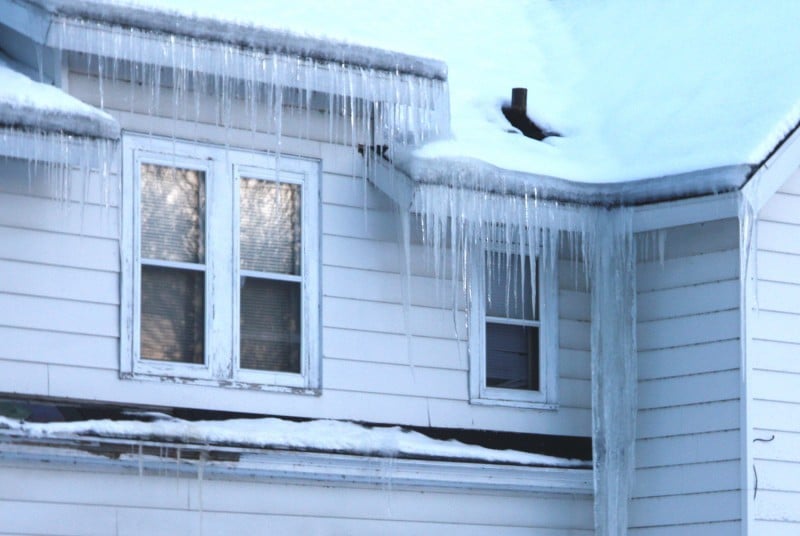 An ice dam on a home near downtown Prairie du Sac.

Scott Frey can drive a block from his business’ downtown Prairie du Sac headquarters and point out a half dozen homes with ominous-looking ice dams.

The owner of Frey Construction and Home Improvement, pointing out humongous icicles hanging like stalactites from the eaves of homes during a short drive around the block, said each property could bring a future customer.

Ice dams form when snow melts and refreezes near the overhang where there is no heat loss from the home, potentially backing up water beneath the shingles and inside the home.

“When there is 10 inches of snow, it’s critical you remove snow from the bottom three to four feet of your roof,” Frey said.

Both Frey and Brad Hasheider, owner of Hasheider Roofing and Siding in Prairie du Sac, said they have received numerous calls about ice dams since the heavy snowfall last month deposited as much as 15 inches of snow on some area rooftops.

“The snow acts as an insulator on the top side, so on the bottom water runs down to the overhang, which isn’t heated underneath,” Hasheider said. “The ice dam itself doesn’t leak but if it gets high enough, then it pools water behind it and it backs up underneath your shingles. Shingles are made to shed water, not be submerged in them.”

Then, Hasheider said, water can get beneath the shingles and into the house, pooling in the ceiling and trickling down walls, doors and windows creating an expensive mess.

Both Prairie du Sac companies offer snow and ice dam removal services. Frey said the job would likely be around a few hundred dollars but it largely depends on the severity of the job, whereas Hasheider said they generally charge $65 an hour for snow and ice removal. “But with that said, we’d be helping them find a solution to prevent ice damage from occurring again,” Frey said.

Ice dams usually are indicative of a greater problem — inadequate insulation and venting. “What they really need to work on long-term is having a roofing system that breathes and isn’t heating the outside,” Frey said.

Hasheider said he’s been in homes were the attic is as warm as the rest of the house, which is a sign of both poor insulation and ventilation.

Homes that are particularly susceptible to ice dams are Cape Cod designs in which the attic space is used for bedrooms, and in houses with cathedral ceilings, where the gap between the ceiling and the roof is so narrow that it limits the amount of insulation and ventilation.

Hasheider said if an ice dam has formed, roofs with the lesser pitches tend to have the worst damage. Looking at some of the homes in downtown Prairie du Sac with ice dams, Frey said, “A lot of them are probably going to get away with it.” But, he added, “It’s a risk.”

Hasheider said it older homes, many built in the ’70s and ’80s to different energy-efficiency standards, are most prone to ice dams. “(The solution) varies from house to house, Hasheider said. “It depends on how they’re built as to what they need.”

Long-term cures don’t come cheap: typically between $2,500 and $4,000. But in some cases water damage becomes extensive. That’s when companies like Certi-Dry are called upon.

“I think a lot of times people don’t know they have a problem until it’s too late,” said Dave Meyer, owner of Certi-Dry, one of about a dozen companies in the Madison area that specialize in water mitigation. “Sometimes the water is in the walls and you don’t even see you have a problem.”

Meyer’s crews have been hustling to keep up with demand the past couple weeks. A typical restoration project, which includes drying and repairing walls and ceilings, can take up to 30 days and cost around $5,000. The costs generally are covered by insurance.

The biggest problem, Meyer said, is missing or ignoring a potential water problem.

“People can have ice in the attic and not even know it,” he said. “Even if you never see the water staining, if it’s moist in the attic from that ice, in the spring you’re going to start growing mold.

“Most people do something about it when they see water, but we don’t tend to think about our attics because nobody goes up there. If they’re worried about it, have somebody come in and get in the attic and look. It’s not going to cost anything to see if there’s a problem.”

Hasheider his crews will do snow removal, melt the ice dams and diagnose what is causing them.

“We can stop it from leaking on the outside and we also offer to see what the problem is and give a price and offer a cure for it, whether you do it now or in the spring” he said.

Zach Frosch with Frey Construction and Home Improvement clears a Madison home of snow in preparation for melting its ice dams last week.

An ice dam on a home near downtown Prairie du Sac.