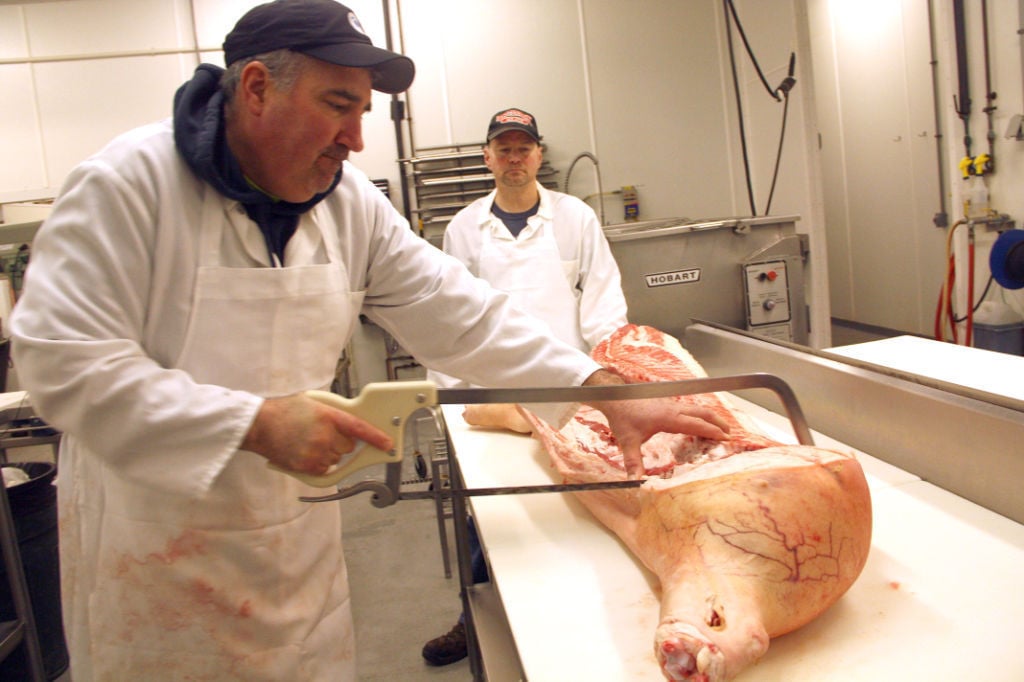 Wyttenbach meat cutter Troy Nolden begins to butcher a half hog in the beginning stages of demonstrating the meat market’s approach to curing and smoking bacon with fellow meat cutter Keith Gritt (right) at “Makin’ Bacon” on Feb. 21. 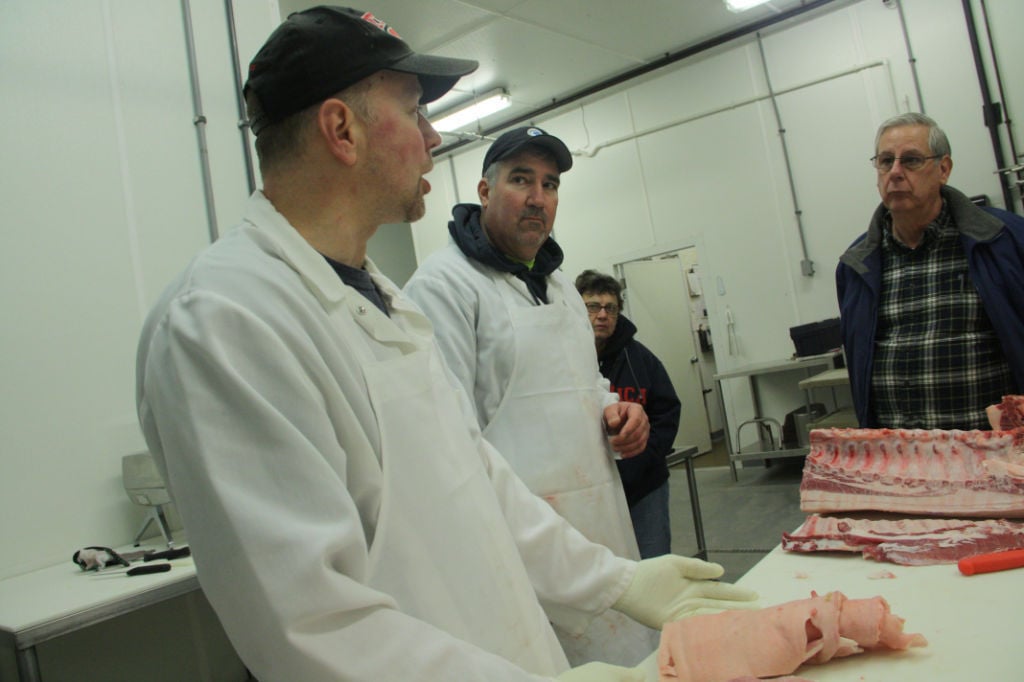 Wyttenbach’s meat cutters Keith Gritt (left) and Troy Nolden take Ginny Wyttenbach and Roy Sternberg through the process of curing bacon right off the hog during a tour of Wyttenbach Meats in Prairie du Sac on Saturday, Feb. 21. 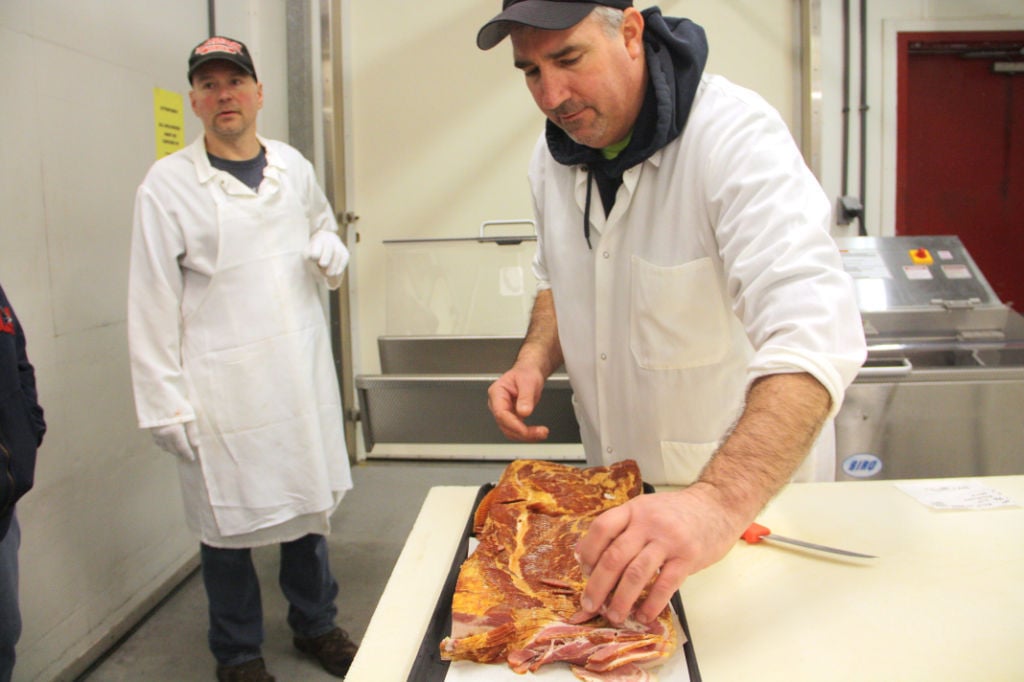 Fritz and Ginny Wyttenbach invited the public in on Feb. 21 for all to see how “makin’ bacon” is done in Prairie du Sac.

Professional meat cutters Keith Gritt and Troy Nolden took visitors back through the meat cutting area of Wyttenbach Meats on County Highway PF and showed the process of making bacon from a freshly slaughtered hog to the kitchen table.

From Jack Wyttenbach’s Maize-n-Bacon pork farm to the Meat Market in Baraboo where the hogs are slaughtered, to the processing rooms of Wyttenbach Meats, visitors on the tour were taken through the entire process of curing bacon.

Nolden started off with a half hog and using a hand saw, cut the pork into several different cuts within minutes, first removing what he called feather bones, thin flat bones within the meat.

But the star of the day was the bacon.

Gritt said Wyttenbach’s bacon can virtually be eaten once it’s cooled down out of the smoke house, but he doesn’t recommend it. He said it only take a couple minutes in the frying pan.

“You can eat it right out of the smoke house, but I don’t recommend it because the fat doesn’t render up enough.,” Gritt said. “You can put it in the frying pan and all you have to do is crisp it up.”

“Bacon you buy in a grocery store has a safe handling label on it which means it’s not fully cooked, Gritt said. “Our bacon is fully cooked.”

Roy Sternberg of Prairie du Sac was there to learn how to cure and smoke his own bacon.

“I’m into cooking anything with meat,” Sternberg said after the tour. “We won a pellet grill not long after Wyttenbach’s opened. I use it all year long to smoke or cook.”

Nolden said Wyttenbachs processes six to eight hogs per week. The bacon comes from the belly of the hog.

About 300 pounds of pork bellies are inserted into a tumbler with curing ingredients and tumbled for about three hours.

“It opens up all the muscles and takes the cure faster and distributes it more evenly,” Gritt said.

That process used to be done by hand with each pork belly individually.

While nutritionists give bacon a bad rap, Gritt said like anything, it’s not bad for you in moderation.

He said nitrites used in the preservation process is found in higher quantities in some vegetables because during the curing process the nitrites turn to nitric oxide thus reducing the nitrites significantly.

“If you eat a pound of bacon a day, yes, it isn’t going to be good for you,” Gritt said.

The meat market is closely scrutinized by state inspectors on a daily basis. Federal meat inspectors visit on a quarterly basis.

In June of 2013, Gov. Scott Walker himself visited the meat market when Wyttenbach’s became the first meat processors in the United States to participate in the Cooperative Interstate Shipping Agreement, which allows state-inspected facilities with 25 or fewer employees to send their products out of state.

After the tour, visitors were treated to Fritz Wyttenbach’s own bacon recipes included bacon wrapped chicken breast, bacon on a cracker with parmesan cheese, mac and cheese with bacon, and the ever popular chocolate covered bacon.

An attempted murder suspect is on the run after fleeing the Portage area, according to a press release from the Portage Police Department.

A Portage woman was charged in Columbia County Circuit Court Wednesday with soliciting a child for prostitution.

The Dodge County Sheriff’s Office responded to a report around 5:30 p.m. Saturday of an all terrain vehicle crash with serious injuries on Rid…

A 3-vehicle accident in the town of Oak Grove claimed one life Monday afternoon. The crash occurred at the intersection of County Highway A an…

Wyttenbach meat cutter Troy Nolden begins to butcher a half hog in the beginning stages of demonstrating the meat market’s approach to curing and smoking bacon with fellow meat cutter Keith Gritt (right) at “Makin’ Bacon” on Feb. 21.

Wyttenbach’s meat cutters Keith Gritt (left) and Troy Nolden take Ginny Wyttenbach and Roy Sternberg through the process of curing bacon right off the hog during a tour of Wyttenbach Meats in Prairie du Sac on Saturday, Feb. 21.