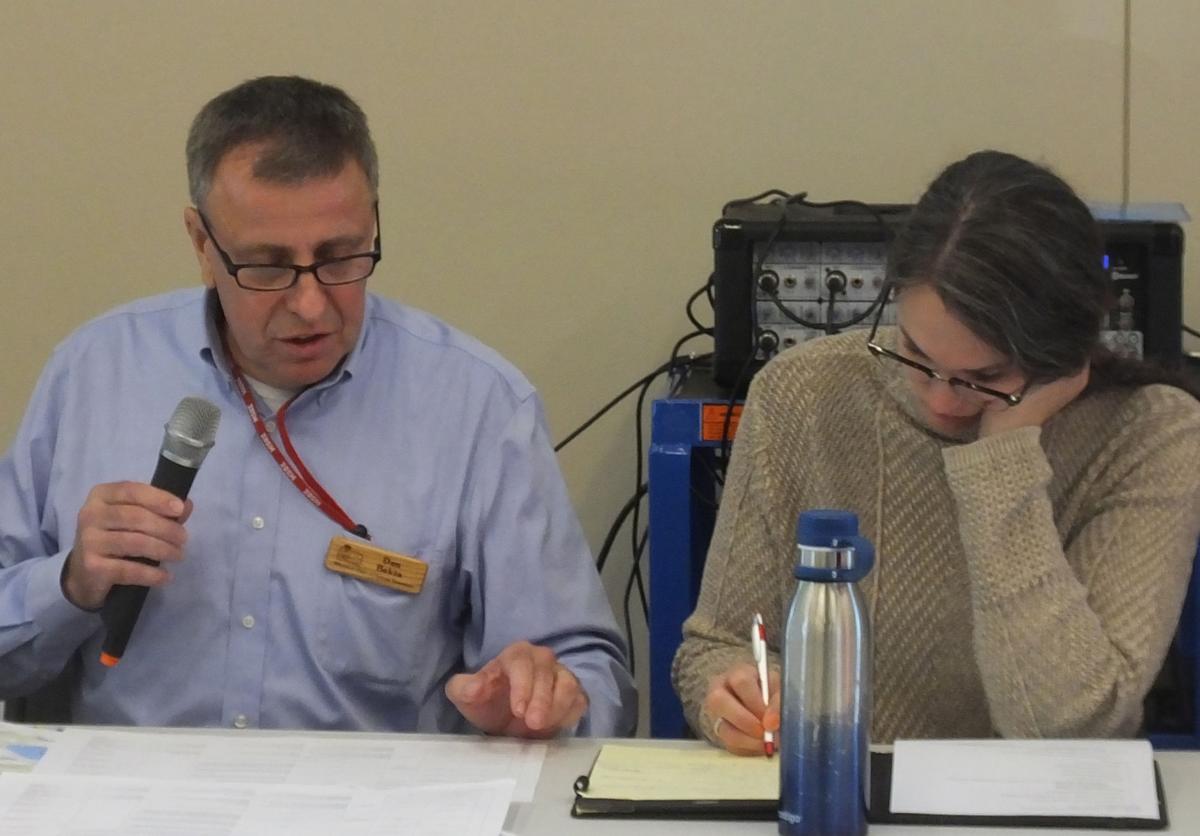 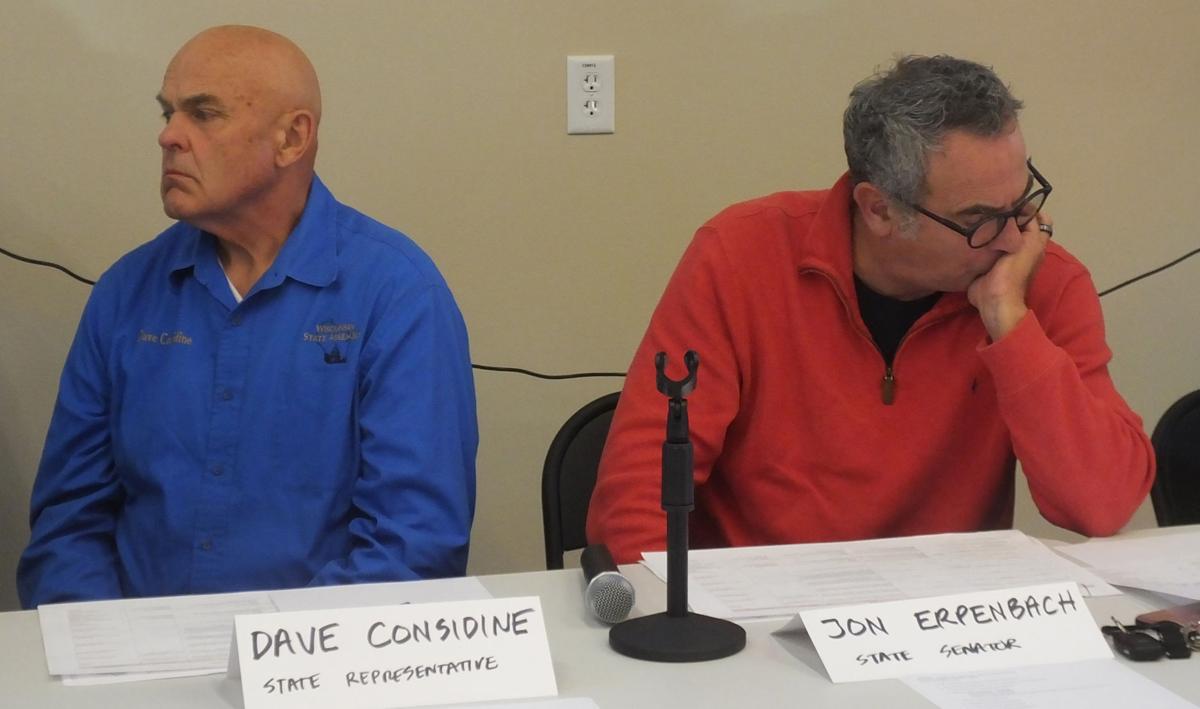 State Assembly Representative Dave Considine and State Senator Jon Erpenbach sit next to one another at the Oct. 7 Lake Flooding meeting in Roxbury.

Residents of the towns of Roxbury and West Point, Wisconsin Department of Natural Resources Officials, county board members, State Assembly Representative Dave Considine and State Senator Jon Erpenbach all met Oct. 7 at the Roxbury town hall to discuss the current water levels affecting locals and preventing them from accessing their homes.

The meeting was held in the Roxbury Town Hall’s largest room, but there was still not sufficient space for all in attendance to have a chair. Cars lined the street along the building once the parking lot filled up.

Dane County Executive Joe Parisi was invited to the event but did not attend.

Since the spring of 2019, the area of Roxbury and West Point around Crystal Lake and Fish Lake have experienced water levels high enough to flood town roads.

The DNR produced a list of several potential solutions to the problem.

One would be increasing pumping from Crystal Lake to Roxbury Creek at an estimated construction cost of about $150,000. The DNR said permit modification would be required and biochemical oxygen demand, or BOD, limits are difficult to attain during the warmer months.

Another option would be pumping water from Crystal Lake to Lake Wisconsin, which could provide about 12 inches of relief per month at the estimated construction cost of $4-5 million.

An option not yet evaluated would be pumping from Fish Lake to the lower Wisconsin River. No cost estimate has been made for the option.

Cost estimates for constructing overflows between Crystal Lake and Fish Lake or Mud Lake to the lower Wisconsin River range widely, from $100,000 to $4.5 million.

Pumping from Crystal Lake to either the Lodi Spring Creek or Lodi Marsh were listed as options “not evaluated” by the DNR. Two major obstacles to pumping into those areas are the designated trout stream status of Spring Creek and the Federal government oversight of Lodi Marsh.

DNR Water Resources Engineer Dan Bekta said there is a myriad of regulations involved with moving water to the Lodi Marsh.

Considine said pumping there would be “passing (the) problem to the city of Lodi.”

Erpenbach said getting the federal government involved would slow the process of finding a solution significantly. He voiced approval for a ground-up approach.

“Dave (Considine) and I can’t necessarily do our jobs until a decision is made,” Erpenbach said.

No decision could be made by the collective organizations present at the meeting itself, but directly afterward West Point joined Roxbury in declaring a state of emergency to expedite the process of fighting flood waters. Later in the day, Roxbury agreed to hold a joint meeting with West Point in the near future to discuss establishing a tube to carry water from the towns out into the Wisconsin River.

MSA Senior Project Manager Charles Bongard said with the current information available, a preliminary route for a tube to transport the water could be determined.

Both towns have separately fought the flood waters through engineering projects, but through their joint effort the hope is larger entities will begin to get involved.

Trudy Marx Markwood of Roxbury has been affected by the flooding and had access to her home severely limited by the water. She said at the meeting the last of her neighbors moved out last week. By rowboat.

Roxbury and West Point to hold joint meeting on flooding

The town of Roxbury will soon hold a joint meeting with the town of West Point to initiate a coordinated effort to combat flooding in both areas.

The town of West Point wasted no time declaring a state of emergency Oct. 7 to expedite the process of addressing flooding across town roads.

State Assembly Representative Dave Considine and State Senator Jon Erpenbach sit next to one another at the Oct. 7 Lake Flooding meeting in Roxbury.