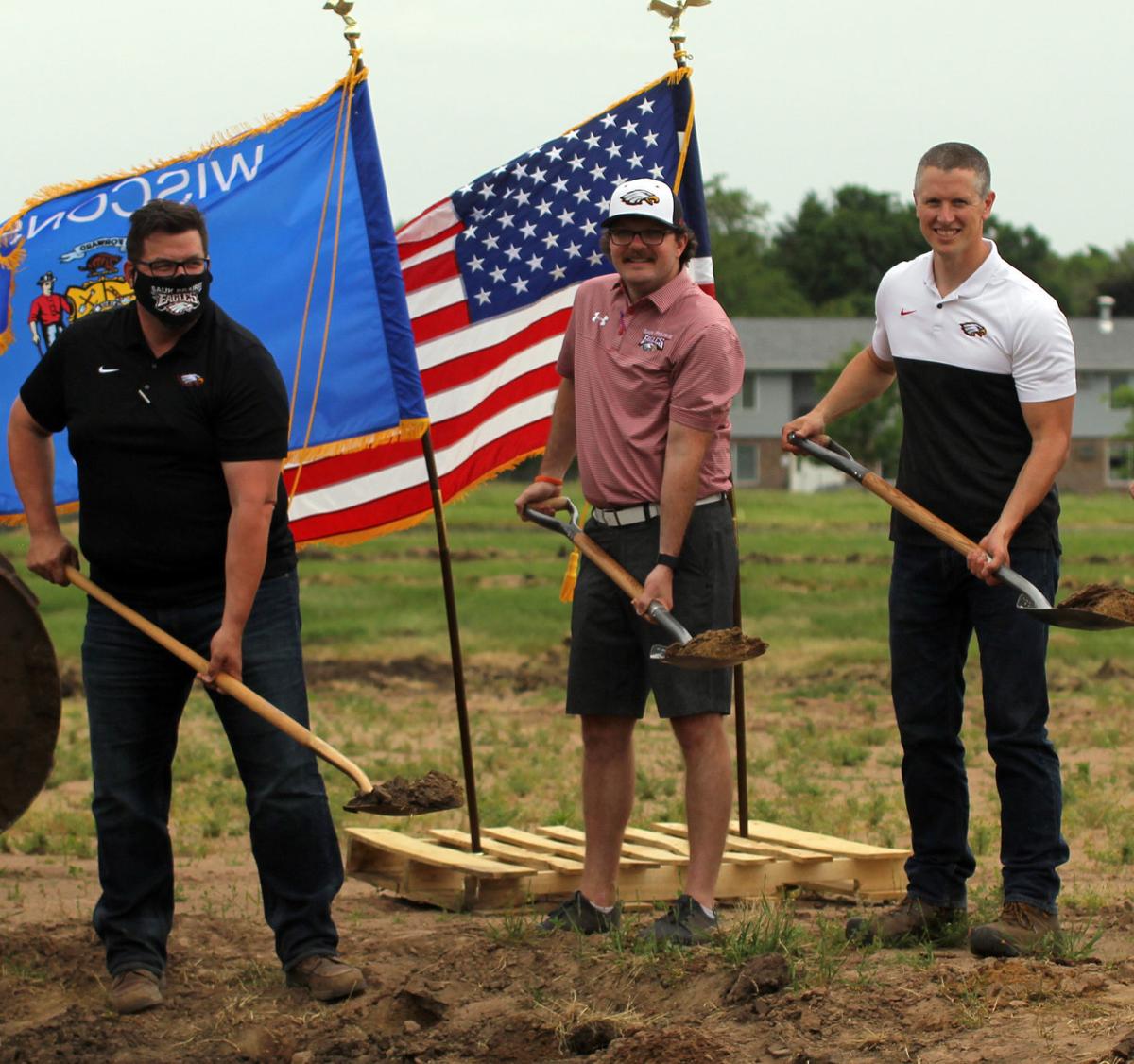 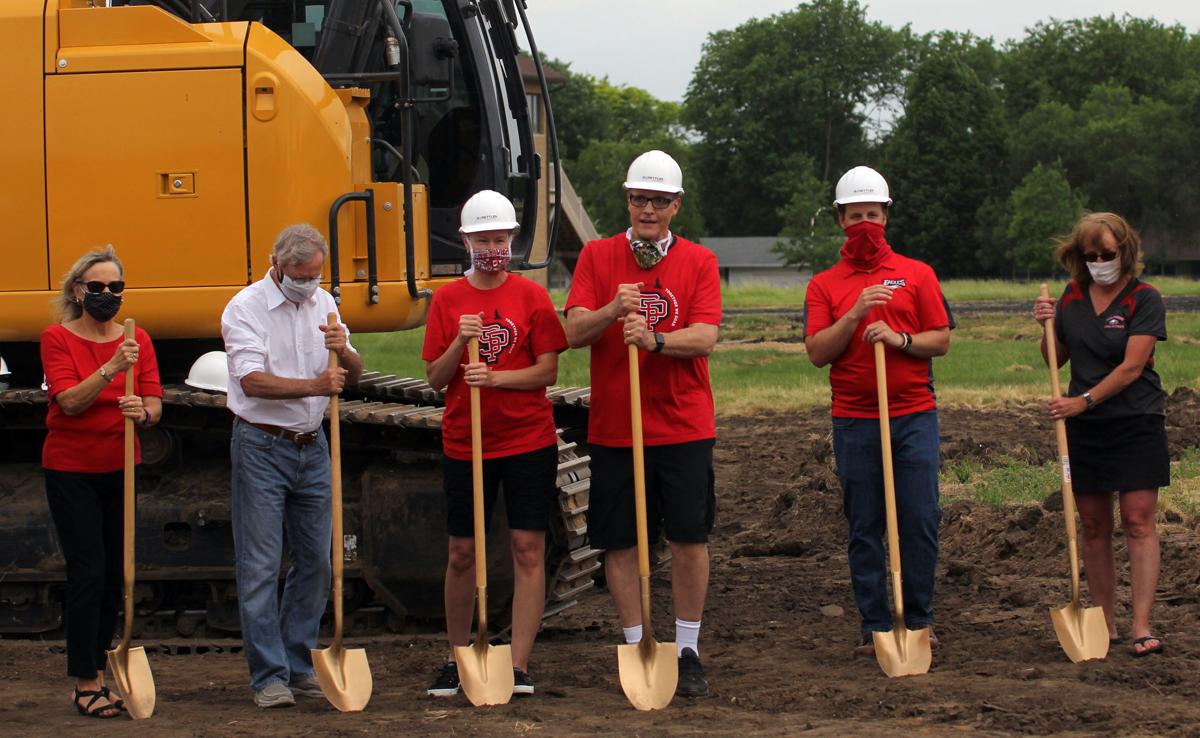 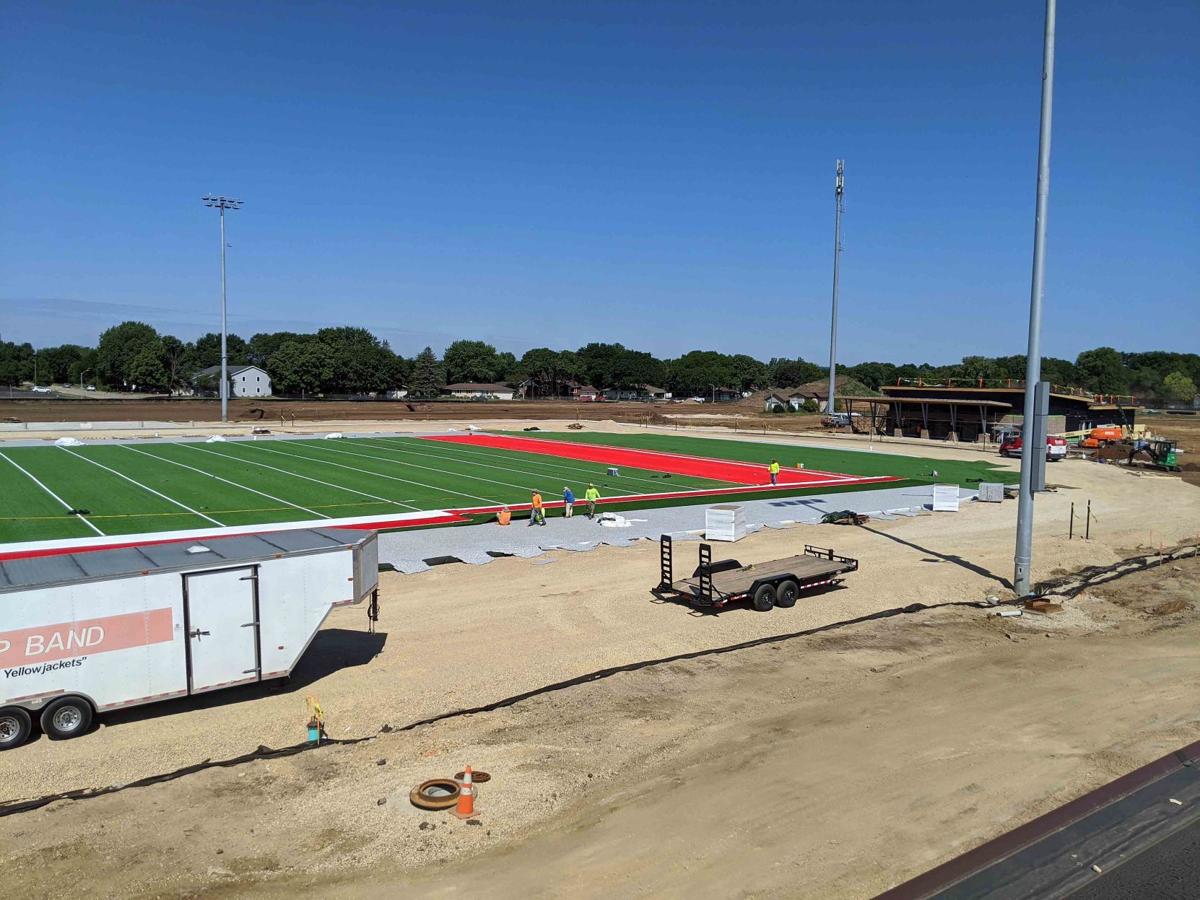 The new turf field was laid down this week at Sauk Prairie High School. The field and the corresponding stadium are part of a $65 million referendum that passed this spring to overhaul numerous athletic and academic spaces within the Sauk Prairie School District. The Sauk Prairie Community Stadium and Athletics Complex broke ground in early June, with the intention of being ready in time for prep football and soccer games this fall.

Ground was broken at the Sauk Prairie Community Stadium and Athletics Complex on Tuesday. The community won’t have to wait long for the plan to come to fruition, as the goal is to host prep soccer and football games at the new stadium in less than three months.

People throughout the community — from school officials to coaches to Chamber of Commerce members — gathered to participate in a groundbreaking ceremony celebrating the construction of a new athletic complex that was part of a $64.985 million referendum that passed April 13.

“In the midst of a global pandemic and in an election that had a lot of questions, the support for the school district and the children of this community was overwhelming,” Superintendent Jeff Wright said of the referendum, which saw 3,591 of the 5,929 votes in favor of the renovation. “We’re so grateful for the generous support of Sauk Prairie’s residents for the kids and the families that will some day be playing on this surface. We as a team wanted to bring a lot of the adults that made this a living athletic field over the last few decades to put shovels in the ground, so that in a few months when we reopen we can have kids do that ribbon cutting and celebrate that they’re the ones who get to now own it and make it a special place for decades to come.”

The student-athletes should have plenty of space to use. The groundbreaking ceremony included a video showcasing the expectations for the new 2,000-seat stadium, which will feature a turf field, concessions plaza, increased parking and a track. The complex will also include softball fields, soccer fields and a community plaza that will serve as a gathering place after games, marching band events and graduation ceremonies.

The majority of the athletic fields will remain located behind the high school — shifting south from their previous locations. The old stadium has been removed, with a segment of its footprint eventually being used as a parking lot and for a $12 million swimming pool that will be part of a high school expansion. The old swimming pool will transform into a weight room, wrestling room and locker rooms.

“It’s going to be quick,” Wright said, gesturing to the tore up ground surrounding him. “This change is already happening very quickly and there are some very exciting months ahead on this piece of land as we prepare for the opening in September. We’re really excited about that opportunity, and then we begin a ton of work on our high school over the next two or three years. It’s really going to transform this incredible learning space into one that I think’s going to be the envy of much of the Badger Conference and this whole region.”

The athletic complex is just a segment of the impending developments within the Sauk Prairie School District. A May groundbreaking ceremony kicked off the expansion of Merrimac Community Charter School, while learning spaces throughout the high school, which was built in 1962, will be added and renovated.

“I’m honored to be a part of this groundbreaking for an amazing facility that’s about to be built,” said longtime Sauk Prairie teacher and coach Scott Schutt, noting he is retiring Wednesday.

The press box at the new stadium will continue to be named after the Schutt family, which has been in the community since Scott’s father, Gene, arrived in 1957 to teach and coach. Scott remembers 1987 as the year the first football games were played at the high school stadium in Prairie du Sac. Games had previously been played at Chuck Hall Memorial Field — the current baseball field — in Sauk City.

“This is just so exciting to see the transformation,” said Dennis Kahn, a former music teacher who also announces Sauk Prairie sporting events. “Being a lifelong resident of Sauk Prairie, I remember when football used to be played down at Chuck Hall Field. ... The fence was slats of slab wood that were nailed up, and there was a gap between each piece of slab wood, so people that didn’t want to pay to get in games would just peek through the opening between the slabs. ... I’ve seen that transformation from that field to stadium field, and I can’t wait to see what takes place at this whole complex over the next few years.”

“Our kids could see diagrams and they’d say, ‘that looks neat, when’s this going to happen?’” Boyer said in April. “I think kids like to be proud of what they have and what’s available to them as a high school. ... There are some things right now that had to get addressed. That’s the primary focus, but there’s also new and advanced features and technology. I think kids see that and it’s exciting.”

“Thank you,” Wright said. “To so many of you for building the tradition that allows us to gather here today and create a new tradition for Sauk Prairie that is going to serve the children of this community for decades to come.”

Photos of the groundbreaking ceremony for the Sauk Prairie Community Stadium and Athletics Complex on June 9, 2020, at Sauk Prairie High School.

Sauk Prairie High School supporters will be able to leave their mark on the new stadium.

The new turf field was laid down this week at Sauk Prairie High School. The field and the corresponding stadium are part of a $65 million referendum that passed this spring to overhaul numerous athletic and academic spaces within the Sauk Prairie School District. The Sauk Prairie Community Stadium and Athletics Complex broke ground in early June, with the intention of being ready in time for prep football and soccer games this fall.