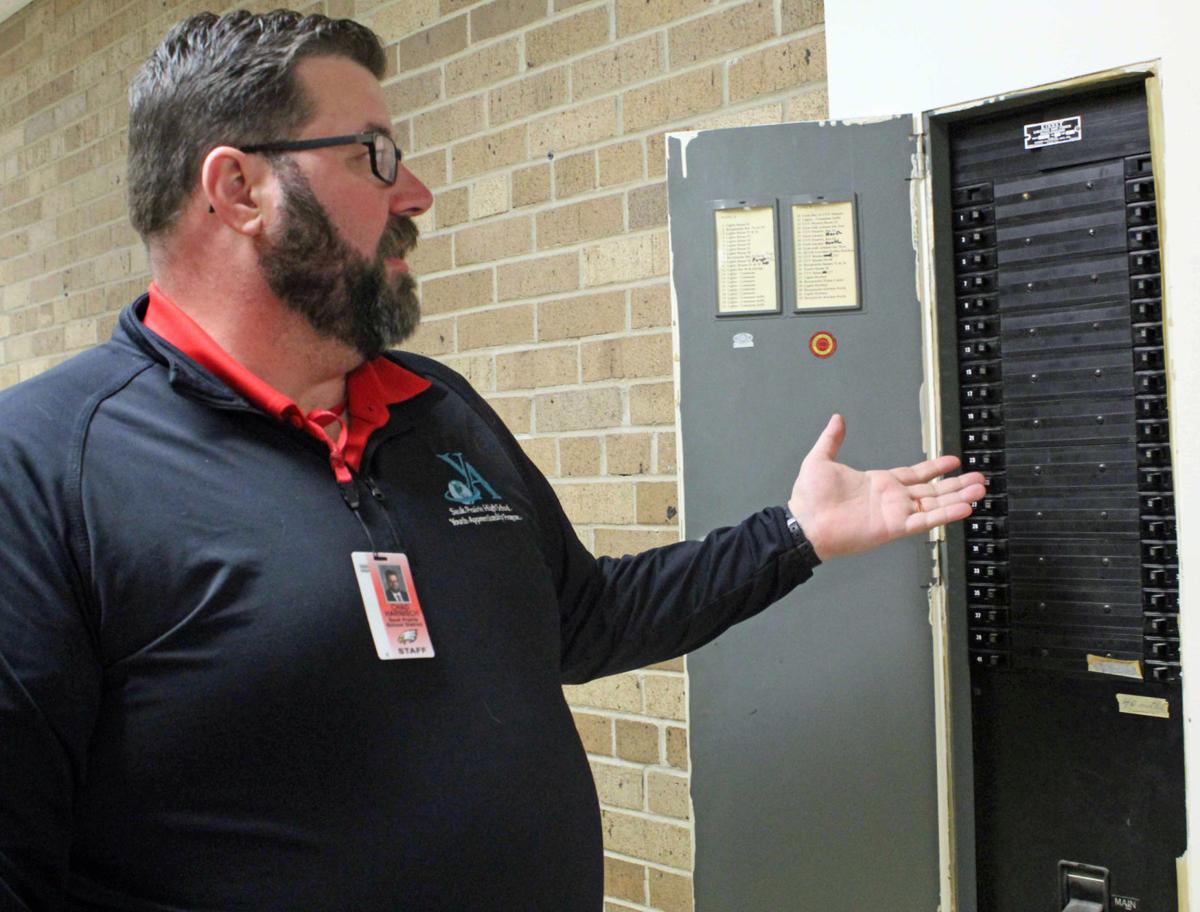 Sauk Prairie High School principal Chris Harnisch shows current electrical equipment from when the high school was built in 1962. The district is upgrading the electrical system as part of a $64.985 million referendum that passed. Construction will start in the next two weeks at Merrimac Charter Community School, while the high school construction will also begin this summer. 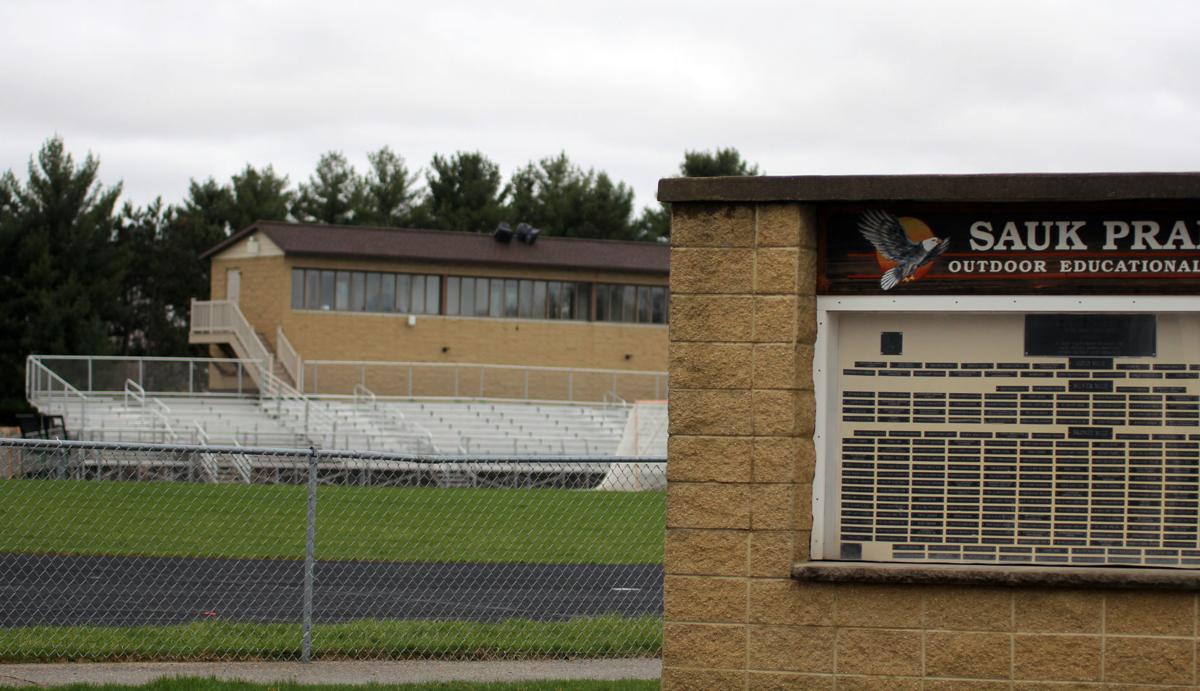 The Sauk Prairie School District's $64.985 million renovation will include taking down the old stadium and constructing a new one closer to the middle school. 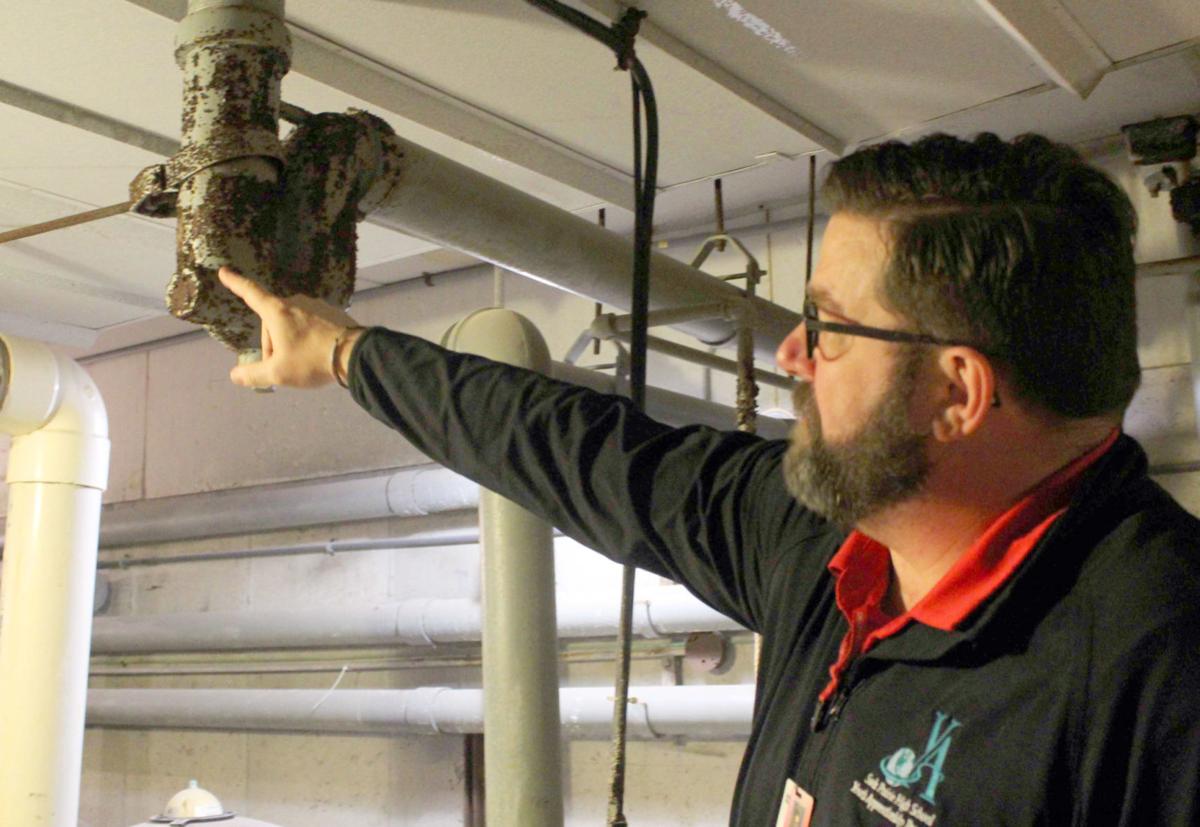 The district is planning to begin construction about a month after the community voted in favor of a $64.985 million referendum that will renovate Sauk Prairie High School, Merrimac Community Charter School and the community pool.

“We were amazed by the level of support and are so grateful for it,” Sauk Prairie Superintendent Jeff Wright said Monday of the renovations, which passed April 13 with 3,591 of the 5,929 votes in favor of the referendum. “I believe that just like an old home, a 60-year-old home, that people recognized that you have to make investments in facilities to keep them healthy and active and safe places to live and learn. You’d replace a 60-year-old furnace, you’d replace a 60-year-old electrical system in a home, and I think people saw this as a very reasonable thing to do at our 60-year-old high school that serves all of our students.

“This is the first really, really big renovation at the high school in several decades.”

The district went into the referendum with three primary objectives: 1) modernizing the high school by making it safer and adding classrooms; 2) replacing aging recreation and athletic facilities before they could no longer be used; and 3) expanding Merrimac Community Charter School to fit every student under one roof.

“About 80 percent of that $65 million goes to the expansion of the high school and the gut rehab of the building,” Wright said of the high school, which was built in 1962. “The building is 60 years old and it still has its original electric and heating system, so literally the electric panels are at capacity. This $65 million project will do everything from putting in fire suppression to new heating and cooling systems, new electrical, adding a new safer main entry, redesigning the cafeteria and kitchen, adding some new classrooms, adding a new pool and relocating the weight room and wrestling room.”

The needs of the Merrimac Community Charter School have also changed significantly since it opened in 2006-07. It has nearly tripled its enrollment in that time, forcing some classes to be held next door at Merrimac United Methodist Church. To alleviate those growing pains, the building will get an addition that includes four new classrooms, a larger kitchen and gym, new restrooms and a better controlled visitor access. There will also be an expanded parking lot.

Merrimac’s overhaul will begin immediately, with Wright saying construction is expected to start in the next two weeks. The district isn’t anticipating any delays due to the COVID-19 pandemic.

“The restroom addition will be ready for the fall when students return,” Wright said of the Merrimac restoration. “The gym addition will hopefully be ready in time for the winter concert, which is our first big community event in that space.

“At this point, the type of projects that we’re doing fit under the essential order, and a lot of the work will be external, so it’s outdoor spaces and it’s safer for that construction to happen.”

That includes at the high school, where the work on the stadium and athletic campus will start this summer. That needs to get underway first, as the current stadium must be moved in order for the high school building to be expanded.

The goal is for the new 2,000-seat stadium — which will feature a turf field, a concessions plaza, increased parking, and a track that has eight lanes plus a sprint lane — to be ready for the fall football and soccer seasons. The stadium will move south from its current location, while the addition to the high school will take up some of the old stadium’s footprint.

The new indoor pool will be added on the north end of the high school. The renovation will replace the old six-lane pool with a $12 million facility that includes an eight-lane competition pool and a four-lane warmer water pool that will primarily be used for community aquatic lessons and classes.

When the new pool is complete, the old one will be converted into a weight room and wrestling room. New locker rooms will also be constructed.

“At a time right now where it’s been pretty tough for a lot of people, I think this was a nice little bit of good news and a show of support from the community that people are getting excited about,” Sauk Prairie Athletic Director Josh Boyer said last week. “That’s kind of a silver lining, some excitement and something people can look forward to right now.”

The relatively fast turnaround of the project also helped keep current students invested throughout the process. Wright said that the floor plans were well received by high school students, who also passed the referendum during a mock election for some of the government classes.

“I think the fact that some of this work is going to actually start in the next few weeks and be ready for next year made the students excited that, even if they’re juniors, they’ll still see some of the benefits of this,” Wright said. “They’re the ones who live in that building. They know that there are structural issues in the high school that need to be addressed. They know that our kitchen and cafeteria could be better. They know that our weight room is not ADA compliant so not all students can use it. ... I think they’re excited to see these improvements be made even if the finished product won’t be ready when they’re still students.”

When the new classrooms are ready, students and community members will have opportunities that haven’t previously been offered by the district. Wright said during the planning process, the district looked at how schools like Baraboo, Beaver Dam and Oregon were able to create flexible learning spaces that are reflective of the modern work place.

“One of the classes I’m really excited about is we’re going to put in a medical careers classroom, which we currently don’t have. That will allow us to bring CNA and EMT training right onto the campus. ... We can do some of that learning right there in the classroom,” Wright said, noting there will also be an improved fabrication laboratory, wood, medal shop and finishing area. “These are spaces that we really just don’t have right now, so we’ll be able to do a lot more in our learning spaces.”

Ground was broken at the Sauk Prairie Community Stadium and Athletics Complex on Tuesday. The community won’t have to wait long for the plan t…

Sauk Prairie High School supporters will be able to leave their mark on the new stadium.

In the wake of its successful $64.9 million referendum on April 7, which is set to bring renovations to Sauk Prairie High School, Merrimac Com…

Sauk Prairie High School principal Chris Harnisch shows current electrical equipment from when the high school was built in 1962. The district is upgrading the electrical system as part of a $64.985 million referendum that passed. Construction will start in the next two weeks at Merrimac Charter Community School, while the high school construction will also begin this summer.

The Sauk Prairie School District's $64.985 million renovation will include taking down the old stadium and constructing a new one closer to the middle school.