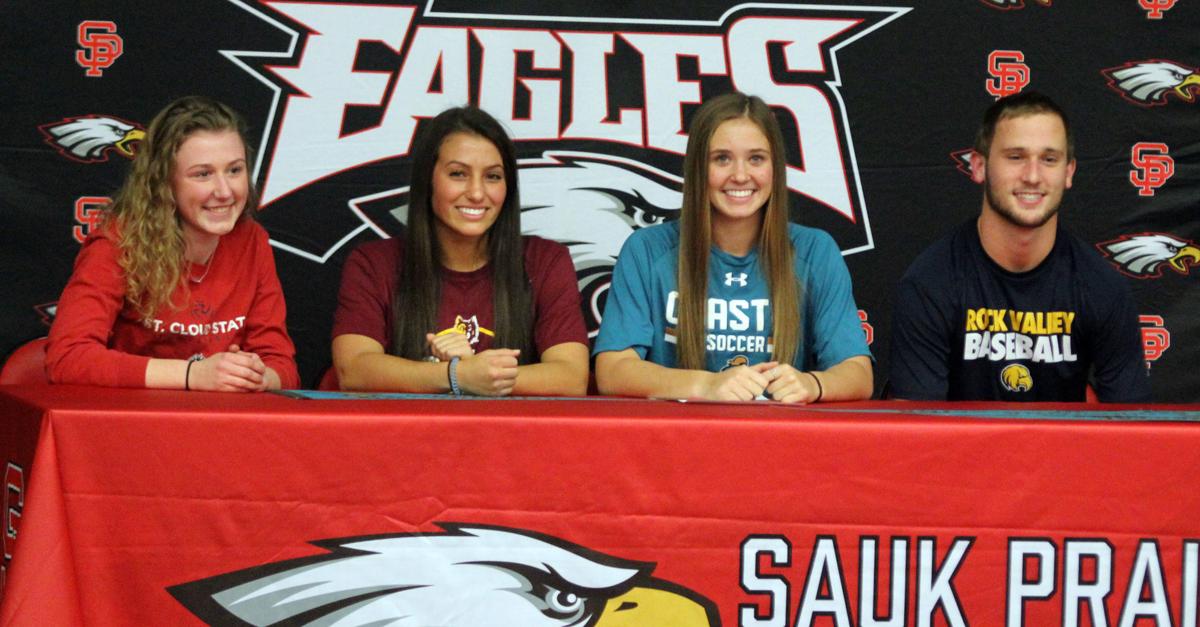 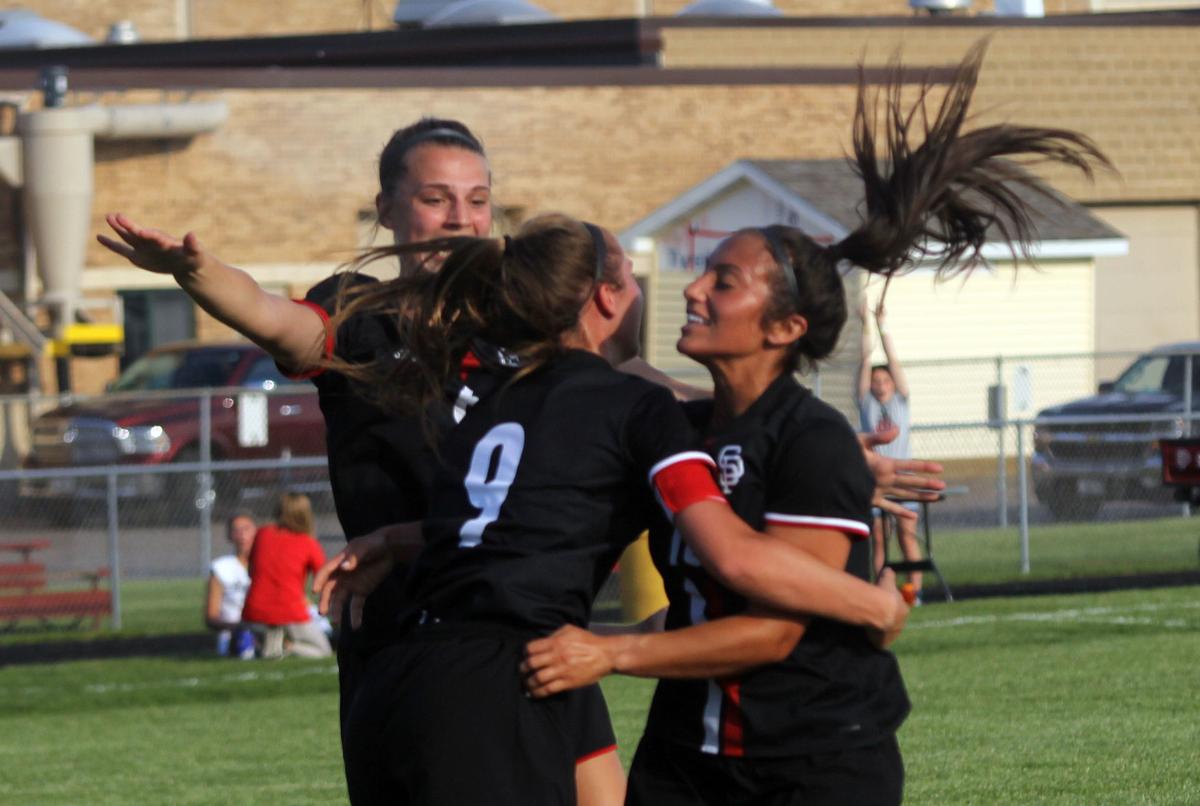 The preparation for Wednesday’s signing ceremony started years ago for Schad and Selden, who have both been three-year contributors in the Sauk Prairie girls soccer program.

“I knew in middle school I wanted to go play in college,” Schad said. “Freshman year I started actively doing what I could to get noticed by going to camps and trying to reach out to coaches even though they can’t talk to you yet.”

“In eighth grade, when I would see people in high school going to colleges and stuff, I would think, ‘oh, that’s pretty cool,’” Selden said. “Then I watched some games and I found that to be so cool. ... It was, what’s my next step going to be? What am I going to do next? I really wanted soccer to continue.”

Being on the same wavelength, the Sauk Prairie captains went through some of the recruiting process together.

“We both searched a lot for recruiting and stuff together,” said Selden, who also plays with Schad on the Rush Wisconsin Soccer Club. “Then we both found spots, so it was really awesome. ... All the work that I put in throughout the years... I’ve been pushed by my parents and all my coaches to be the best that I can, because they just saw so much potential in me and knew that I could go farther and places, I just had to work extremely hard for it.”

Selden will be off to Aberdeen, South Dakota next year, joining a Division II Northern State University team that plays in the Northern Sun Intercollegiate Conference and went 5-12-1 this fall.

“I just really fell in love,” Selden said of why she chose Northern State, noting she is interested in studying criminal justice or forensics. “A month before I committed was when I heard about it. ... It was just crazy because I hadn’t heard about it... I hadn’t heard about it... and then it was just where I wanted to go. ... It’s just a lot of relief. Last year, I was traveling a ton, trying to go to all these camps to get seen by coaches. It’s just so much pressure on you, and then having to videotape your games and having pressure in games. This is a nice relief and I can just have fun playing.”

Schad’s decision wasn’t easy, but she verbally committed Aug. 4 after attending a July camp at Coastal Carolina. The Chanticleers, who are located in Conway, South Carolina, went 7-9-2 this fall, including 5-4-1 in the Sun Belt Conference.

“I went there for a camp, and I really, really liked the campus, the coaches and all the girls there,” Schad said. “They made me an offer about two weeks after the camp. I had two other offers, and one of them had a time limit, so I had to choose within a week ... I was really nervous to make the decision, but I choose Coastal because of how it stood out to me when I first stepped on campus. It was kind of that wow factor of, ‘wow, I like this place.’ Going through the camp, I could see myself there, I could see myself fitting in with all the girls, and I got along with all the other commits. They were really nice to me. We kind of clicked immediately and that really stood out to me and I was like, ‘I want this, this is where I want to spend my next four years.’

“Now, I know for sure this is right and I’m really glad I made this decision. ... I’ve always wanted to go to the Carolinas. I have no idea why, except all the books I would read were always in North or South Carolina, so I always thought it was cool and wanted to go there. And I like warm weather and beaches a lot, so it’s a perfect place.”

Schad is planning on studying biology and eventually going into the medical field, while she is also interested in business.

The duo has played a crucial role in the growth of the Sauk Prairie girls program, which was 6-10-3 the year before Schad and Selden joined the team. The Eagles have compiled a 45-14-4 record in the three years since, including a 20-2-2 record in a 2019 season that ended a game short of the second WIAA state appearance in program history.

Selden is a three-time All-Badger North Conference selection and an honorable mention pick on the 2019 Wisconsin Soccer Coaches Association’s All-State team. The midfielder tallied 13 goals and 18 assists in 24 games last year, giving her 40 goals and 25 assists through three years.

Schad was a first-team All-Badger North midfielder as a sophomore before shifting back to anchor the defense last spring. She helped the Eagles notch 16 shutouts while also showcasing the ability to join the attack, finishing with six goals and seven assists.

“I think that really works in my advantage,” Schad said of her versatility. “I got recruited to play a defensive position, but my coach also told me ‘you’re one of the versatile players, I could see you playing center midfield, outside back or middle back.”

Schad’s just happy to be on the field.

“I love soccer more than anything, I honestly don’t know what I would do without soccer,” she said. “I’m skilled and I know I’m skilled, but I also know I’m not the best, so I can push myself and I have self discipline, so that makes me a better player.”

Their college commitments behind them, they’re excited to see what they can do this spring.

“I don’t want to jinx anything, but my goal is to make it to state,” Schad said. “We were so close last year, a one goal loss to Oregon, and they ended up winning state. We just have to have a lot of hard work. I’m really excited. I’ve never been more excited for a season.”

The senior captain led the Eagles to a 31-14 record and a surprising postseason run. Sixth-seeded Sauk Prairie beat No. 11 Portage for its first regional win since 2014, then upset No. 3 Madison Edgewood before losing in five sets to No. 2 McFarland in the WIAA Division 2 regional finals. Apel had 29 digs against McFarland, which went on to lose in the state championship.

Apel will graduate as a four-time All-Badger North selection, having earned honorable mention recognition as a freshman before earning three straight second-team nods. The multiple-year captain went well over the 1,000-dig mark, reaching the milestone as a junior.

German to play at Rock Valley

German, a three-sport athlete at Sauk Prairie, will be continuing his athletic career by playing baseball in the National Junior College Athletic Association at Rock Valley College in Rockford, Illinois.

German is a two-time honorable mention All-Badger North selection on the diamond. A center fielder and pitcher last season, German batted .373 with 23 runs, 17 RBIs, 14 walks and 16 stolen bases while also tallying a 2.26 ERA, a 2-3 record and four saves on the mound.

The last time Kelsey Selden and Ella Schad were in their Sauk Prairie girls soccer jerseys, they walked off the field together with Selden say…