Bats wake up, but Brewers eliminated after Josh Hader gives up homer to Braves' Freddie Freeman
0 Comments
Share this
{{featured_button_text}}
1 of 2 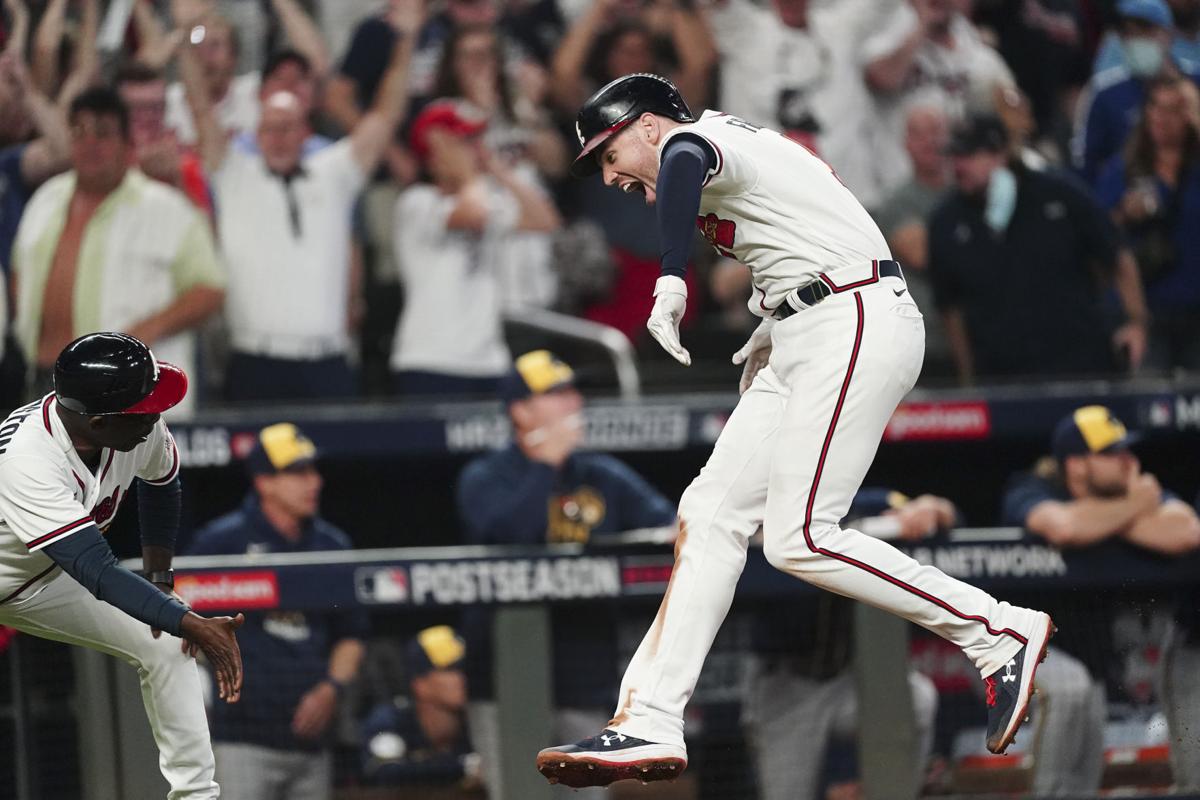 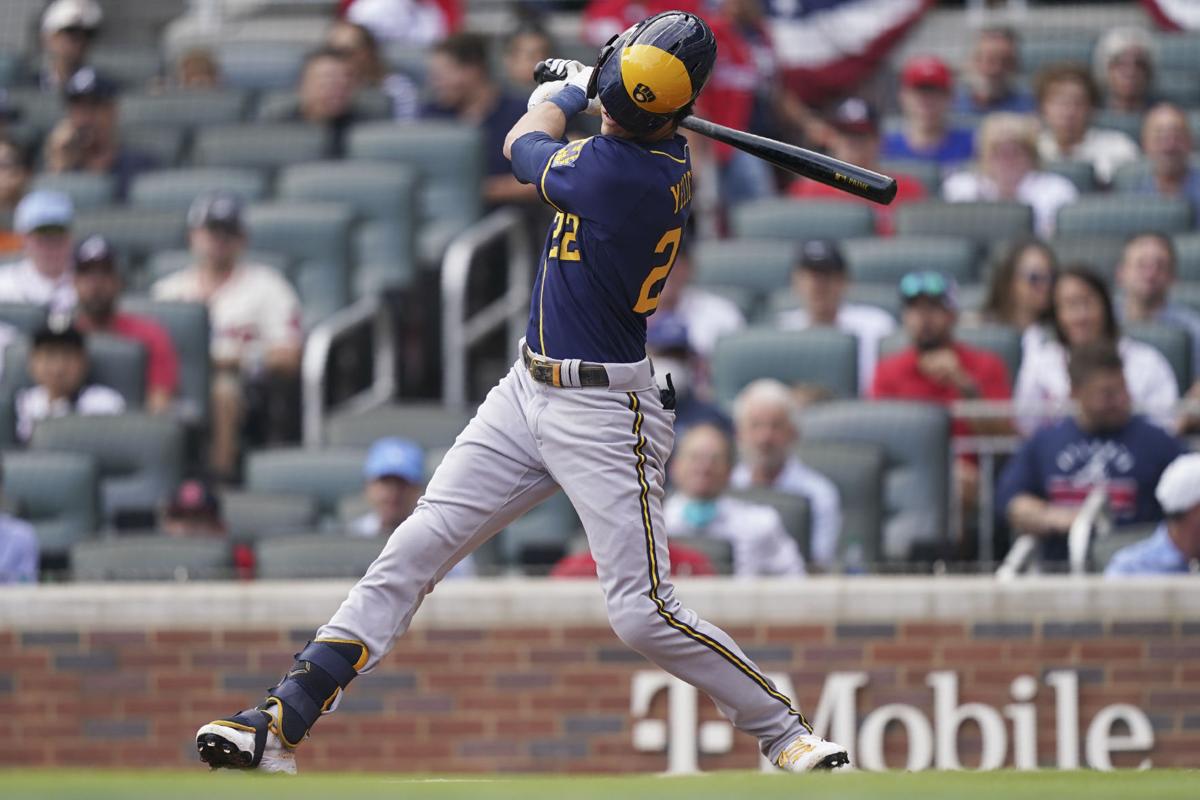 Brewers left fielder Christian Yelich strikes out during the first inning Tuesday. He struck out three times during Game 4, including as the last out of the game.

ATLANTA — At least the Milwaukee Brewers came out swinging.

Even if Christian Yelich went down looking at the end.

Milwaukee was 0-for-20 with runners in scoring position during the NL Division Series until RBI singles by Omar Narváez and Lorenzo Cain produced a 2-0 advantage against Atlanta in Game 4.

But after snapping a 22-inning scoreless drought, the Brewers blew a pair of two-run leads Tuesday and were eliminated when All-Star closer Josh Hader gave up the decisive homer to Freddie Freeman in a 5-4 loss to the Braves.

There weren’t many highlights in October, and the Brewers head into the offseason still seeking their first championship. They haven’t been to the World Series since 1982 despite making the playoffs in each of the last four years.

“There’s a lot of things we can be proud of from this year and try and carry into next year,” pitcher Brandon Woodruff said. “But you know what? The goal never changes. We still believe we can win the World Series and make it there. It’s just all about trying to do it.”

Hader, who converted 34 of 35 save chances during the regular season, was asked to keep the score 4-all in the eighth inning. He struck out the first two batters he faced before Freeman, the 2020 NL MVP, took him deep to put Milwaukee in a 5-4 hole.

That essentially ended it.

“He had to pitch in the game, and it was the right part of the lineup for him to pitch to,” manager Craig Counsell said. “And it was our best against their best. And then you’re never going to — I don’t think you regret having that situation. It’s how it works. That’s how the game works. That’s how it’s supposed to work.”

Yelich took a called third strike to end it with a runner on first in the ninth against Braves closer Will Smith, who saved his third game of the best-of-five playoff to help the Braves advance to the NL Championship Series for the second consecutive year.

For Milwaukee, which won 95 games during the regular season and easily took the NL Central title, the winter will come with plenty of second-guessing.

“Obviously, pretty tough,” Woodruff said. “We’ve got a really good team. And we knew that it was going to be a challenge coming into the series, just with the way that they can swing the bat and pitch the ball. And their defense is really good. But it just felt like it’s a tough way to end the year. We felt we were a special group. It’s going to hurt for a while, but we’ll get over it and move on to next year.”

The Brewers took a 4-2 lead in the fifth on Rowdy Tellez’s second two-run homer of the series, a 448-foot shot to center field, but the Braves came back to tie it in the bottom half on Joc Pederson’s RBI groundout and Travis d’Arnaud’s run-scoring single.

“The playoffs are all about momentum,” Tellez said. “When you can make a good play, swing the bat well, throw a good pitch, have a good inning, it shifts momentum — especially when you’re on the road.”

Milwaukee starter Eric Lauer, making his first career postseason appearance, breezed through the first three innings before running into trouble in the fourth. The left-hander gave up two runs and four hits in 3⅔ innings and was removed after hitting Guillermo Heredia with a pitch.

Atlanta tied it at 2-all in the fourth against Hunter Strickland on pinch hitter Eddie Rosario’s two-run single.

After there was no scoring in the sixth and seventh, it came down to Hader, a gas-throwing left-hander, facing Freeman, a left-handed-hitting slugger. Hader led NL relievers with 102 strikeouts in 58⅔ innings and was handed his only blown save on July 7 at the New York Mets. He gave up no runs in his last 21 appearances and saved Game 1 in Milwaukee.

Freeman’s drive was the first homer Hader allowed to a left-handed hitter this year.

The Brewers will head into the winter wondering what might have been.

“I think, look, in the moment right now, we’re all really disappointed,” Counsell said. “And it’s hard to get past the disappointment right now sitting here right now. It just is. But I think in the end, we had big goals. We didn’t quite get there. But you win 95 games, it’s a special group. And they did accomplish some special things. That’s what we talked about a little bit.”

Travis Shaw tied the game with a two-run double in the ninth and after Josh Hader hit 100 MPH on the radar gun in the 10th, Orlando Arcia got the season started on a high-note with a single up the middle that sent Lorenzo Cain home with the game-winning run.

The late heroics sent the Opening Day crowd of 11,740 fans, who had waited more than a year to watch a baseball game in person thanks to the coronavirus pandemic which led to the 2020 season being played in empty stadiums, into a tizzy.

“There’s no doubt the fans were part of this today,” Brewers manager Craig Counsell said. “On a day like today, a home crowd is what kind of keeps you going when you’re down and they’re still giving you energy. You get that one little crack like we did in the ninth, and the crowd’s right there with you, and you felt it.”

After taking the first two games of a four-game set with the defending World Series champion Dodgers, the Brewers climbed back from deficits four times including twice in extra innings, before Travis Shaw drove in Mario Feliciano with a single in the bottom of the 10th to cap a three-run rally as Milwaukee took its third straight from Los Angeles.

“It’s the team you have to go through to get to the World Series,” Brewers starting pitcher Brandon Woodruff said. “Any time you play the Dodgers it feels like a playoff-type game, and we’re only in May. That was a big-time win, a big-time series win. I was just happy to be a part of it.”

It's been a rough season for Jackie Bradley Jr. The outfielder, who signed a two-year, $24 million contract in spring training, has been mired in a funk all year and carries a .168 average into Friday's series opener against Cleveland.

Most of Bradley's highlight-reel moments have come in the outfield but he helped the Brewers earn a series split with the Padres, owners of the best record in baseball at the time, with a two-out single in the 10th inning at American Family Field.

"They like to use the saying ‘It all evens out.' Well, I’m here to tell you that does not," Bradley said. "I’ll just tell you the truth, it does not even out. But it was good to get this one today."

After Trevor Richards cost Corbin Burnes a victory with a seventh-inning hiccup, Brent Suter and Josh Hader kept the game tied into the 10th and Luis Urías ended it with a ground-rule double to right for his first career walk-off hit, extending Milwaukee's winning streak to five games.

“(Urias) told me before the inning when we were going to the dugout,” Brewers shortstop Willy Adames said. “He said, 'I’m going to walk it off.′ I said, ‘I know you got it.’ It was amazing to watch it. It was even more because he told me that he was going to do it, so he had that confidence in himself.”

Dubbed "Re-Opening Day" as American Family Field returned to full capacity for the first time since September 2019, the Brewers recreated their original Opening Day comeback. This time, it was Willy Adames hitting the game-tying home run in the ninth and Keston Hiura winning it with a sacrifice fly in the 10th.

“My thing was just to drive a ball to the outfield, and worst case, get a tag on a ball if it happens to go to one of them,” Hiura said. “At first, I thought it was a base hit, then I realized [Rockies outfielder Raimel Tapia] was playing right there, and obviously, he was playing shallow because he had a runner at third. As soon as he caught it, I was like, ‘Oh no, please, go… go… go.’”

Two days after his three-run, pinch-hit home run provided the difference in a victory over the Pirates, Rowdy Tellez stepped to the plate with a chance to be a hero again as the Brewers looked to knock off the NL-leading Giants.

With a crowd of 33,250 chanting his name, Tellez delivered, slapping a single down the third-base line to score Avisail Garcia and give Counsell his 500th victory as Brewers manager.

"That was pretty cool," Tellez said.

Down four heading into the ninth, the Brewers started their rally with a double by Jackie Bradley Jr., who scored on a single by backup catcher Luke Maile. Jace Peterson kept the inning going with a double and Eduardo Escobar loaded the bases with a one-out walk against Giovanny Gallegos.

Cardinals manager Mike Shildt had seen enough and summoned all-star closer Alex Reyes, who left a fastball over the middle that Daniel Vogelbach crushed for the game-winning grand slam.

“I enjoy being in those situations, whether I fail or whether I succeed,” Vogelbach said. “As a competitor, you always want to be in those situations and be the guy that steps up to the plate in that situation. I'm just happy that I was able to come through for the guys who grinded all game. It seemed like we were playing from behind the whole time.”

For the better part of two centuries, our journalists have worked tirelessly to bring our readers the most important news of the day. We’re he…

Swinging away: Brewers maintain aggressive approach to roster building despite past strikeouts

David Stearns has had to make some difficult decisions over the last few weeks.

Showers featuring a few thunderstorms will hit southern Wisconsin from late Wednesday morning into the evening, with an isolated strong storm possible, according to forecasters.

Brewers left fielder Christian Yelich strikes out during the first inning Tuesday. He struck out three times during Game 4, including as the last out of the game.