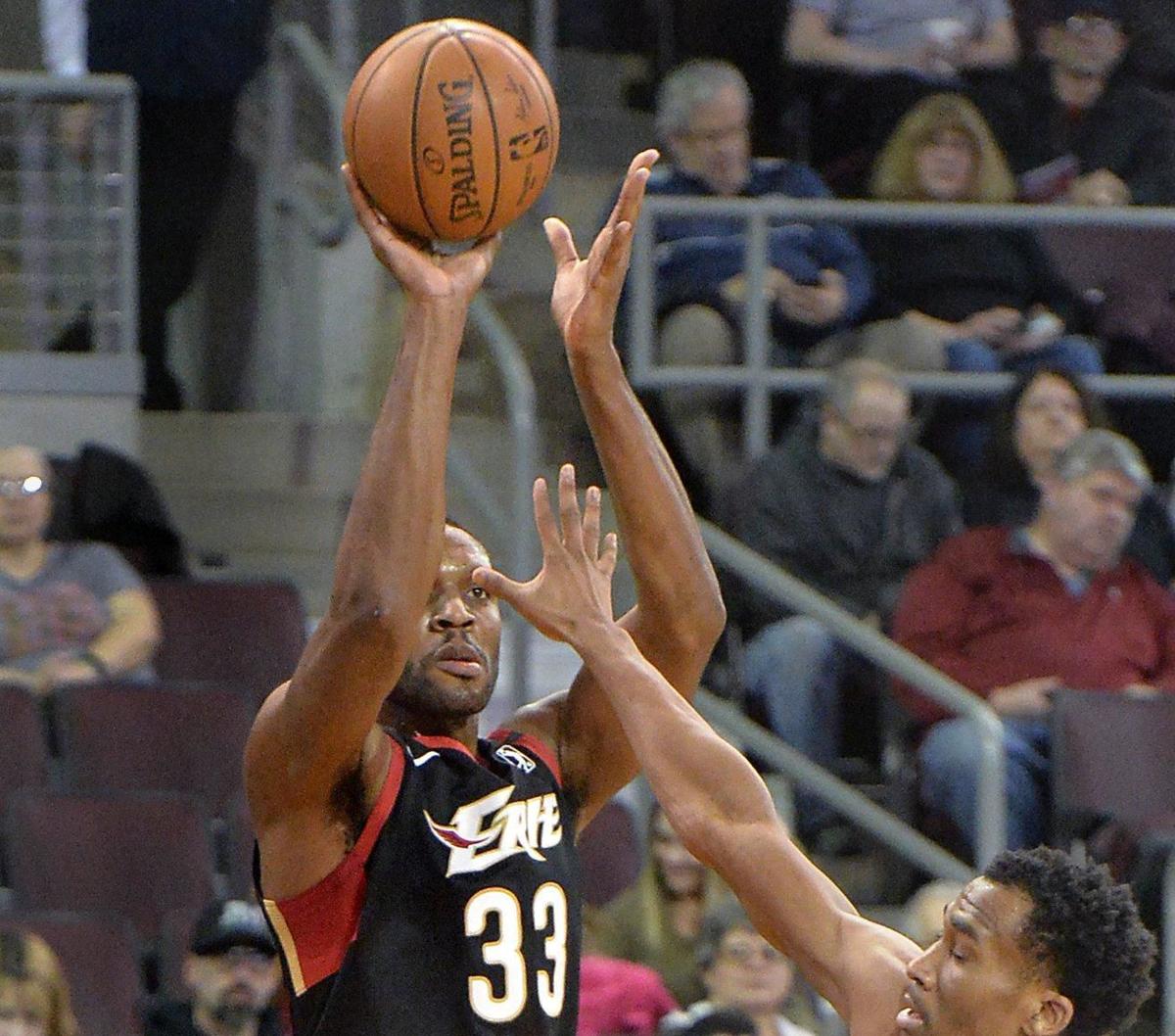 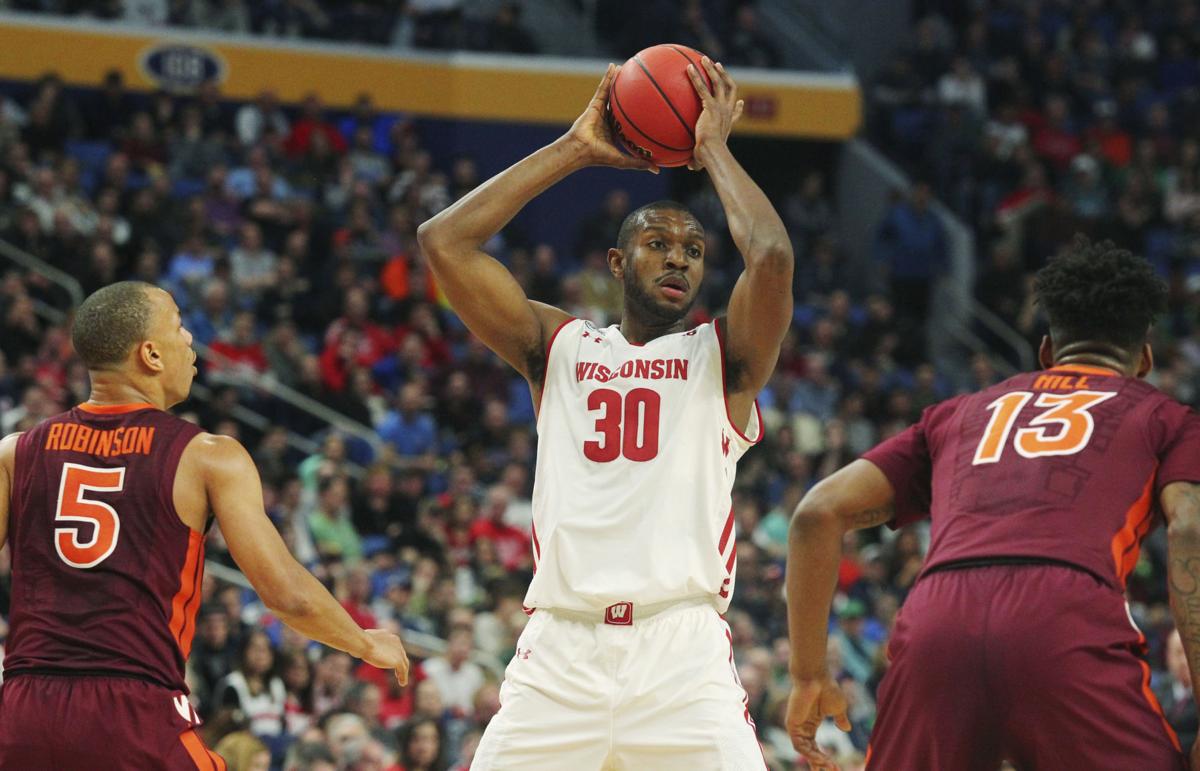 Vitto Brown looks to pass against Virginia Tech during a NCAA tournament first-round game on March 16, 2017, in Buffalo, N.Y. Brown had five points and two rebounds in 17 minutes during the 84-74 victory.

Vitto Brown was ready to return to the court.

As much satisfaction as he was getting from a hobby that turned into a side job of sorts and kept him busy during the COVID-19 pandemic, it was time for Brown to get back to what he loves the most.

This week, Brown is playing in The Basketball Tournament in Columbus, Ohio, on a team that includes former University of Wisconsin teammate Khalil Iverson and another former UW player, Trevon Hughes.

Big X, a team comprised mostly of former Big Ten Conference standouts, opened with a 79-74 win over D2 on Saturday. Brown and Co. will play Red Scare, made up mostly of Dayton alumni, Wednesday afternoon with the winner advancing to the quarterfinals of the 24-team, single-elimination event.

Other notables on Big X include Nick Ward (Michigan State) and CJ Jackson (Ohio State). The team’s general manager is Andrew Dakich, who played at Michigan and Ohio State. Dakich and Brown were childhood friends in Bowling Green, where Dakich’s father Dan coached for 10 seasons.

Brown didn’t score in the opener, but Iverson finished with seven points and a game-high 11 rebounds while Hughes added nine points and three assists.

“We’ve got a nice team,” Brown said. “I’m not going to make any promises on outcomes. Every team in this thing is good. But I like our squad, I think we’ve got all the positions filled and we’ve got obviously a lot of Big Ten, so we all have a lot of the same ideologies on how to play the game.”

COVID-19 forced the event’s organizers to go to great lengths to even play the tournament. Brown said he was sent two saliva tests that had to come back negative for the virus prior to his arrival at the hotel hosting all the players in Columbus.

After arriving a week ago, Brown got tested again and couldn’t leave his room for about 28 hours until he got the results. If a player tests positive, his entire team is eliminated; so far, five teams have been sent home due to positive tests.

“You feel back for some of them, honestly,” Brown said. “Some of these teams are put together on a whim. But some of them, as soon as the tournament ends, they’re getting ready for the next year. That’s how big this has become.”

After his third season in the NBA’s G League ended abruptly in March due to the pandemic, Brown returned home to what he figured would be a boring quarantine.

Instead, Brown found himself part of family operation in which he helped his parents, Angelo and Sheila, produce masks to keep people safe.

While his mother was the MVP of the operation, doing most of the sewing, Brown found plenty of ways to help. He also did some sewing, fielded orders and kept track of them in a spreadsheet, cut out fabric, made straps and put the masks together.

Things got busy after Brown posted some of his mom’s creative handiwork on his social media accounts. Brown said that created a demand that eventually led to the family making as many as 15-20 masks per day to keep up.

In all, the Browns have made over 600 masks, and orders are still coming in here and there. Naturally, the UW-themed masks have been a big hit.

“When I first put them out, it was more just shining a light on her creativity,” Brown said of the masks, which cost $15, which mainly covers costs of material and time spent producing the masks. “I didn’t think we were going to get too many bites at all and then people were loving it and then we had a lot of repeat customers. The main thing really was the word of mouth. One person would get one and, ‘Now, my sister wants one; now, my aunt wants one.’ It just kept on going around like that.”

Brown also spent the quarantine working on his other passion — music. Never afraid to show off his smooth baritone during his time with the Badgers, Brown has been working on a project with his brother Xavier, a music producer, and former UW teammate Riley Dearring.

“It’s about the climate of America right now, everything that’s going on with the racial stuff and things like that,” Brown said. “It’s a positive, uplifting song. I think it’s a good one for people to hear, for sure. And we think it sounds good.

That project and making masks helped Brown get his mind off the disappointment of a 2019-20 season that started off slow but was peaking just as COVID-19 hit.

Brown had signed with a professional team in Greece last summer and was less than a week away from leaving for overseas when he injured his knee while working out. He had driven baseline when he slipped on his own sweat spot on the court and sprained his MCL.

The Greece plan was scrapped and Brown returned to the G League, where he had played for three teams over two seasons. Brown joined his fourth team — the Erie BayHawks — and found a comfort level he hadn’t felt with his previous clubs.

Brown said he felt like the organization, a feeder for the New Orleans Pelicans, had confidence in him. He also connected with his coach, Ryan Perrone.

“A big part of having success on the court is having a coach that actually allows you to play your game and put you in position to succeed,” said Brown, who averaged 17 points and shot 47.4 percent from beyond the arc over his final 11 games. “The rest is up to you at that point.

“They knew what I could do out there, so at that point it just became just go out there and do it. I finally stopped overthinking and things like that.”

Brown was confident he’d finally be invited to play in the NBA Summer League, either with the Pelicans or another team. He had 24 points and 13 rebounds, going 6 of 11 from 3-point range, in a game on March 10.

The next day, the league suspended its season.

Whether it’s playing overseas or returning to the G League for a fourth season, Brown has no idea when his pro career will resume. So when the chance to play in TBT was presented to him, he jumped at it.

“That’s why I’m excited to do this,” Brown said. “They were saying the G League won’t start until maybe January, and I don’t know if I can go that long without playing real basketball.”

Guards Eric Bledsoe and Pat Connaughton have cleared the NBA's COVID-19 protocol and are with the team in Orlando but will not play Friday night against Boston, coach Mike Budenholzer said.

Antetokounmpo scores 16 points playing only the first half as the Nets keep the Bucks from clinching the top seed in the Eastern Conference.

Luka Doncic scored 36 points and added a career-high 19 assists and 14 rebounds on the day the 2019 NBA Rookie of the Year was named a finalist for the most improved award.

Playing in the NBA restart in Florida, the Madison native promotes voting.

Inside the bubble, NBA players have plenty of off-court options

ORLANDO, Fla. - The NBA bubble continues to be a success. None of the 343 players who were tested for COVID-19 on the Disney World campus since results were last announced on July 29 have returned confirmed positives, the league and National Basketball Players Association announced Wednesday. There were also no positive tests from July 29 or July 30. That came after the league and players ...

Jeff Seidel: NBA players hated the food inside the bubble, so they called in some help

DETROIT - All heck was breaking loose. Several NBA players were complaining on social media about the quality of food after entering the NBA "bubble" in Orlando, Fla. So the NBA turned to someone who could fix it - chef Shawn Loving, the department chair of Schoolcraft College's Culinary Arts program. "I got a call from Sean Ford, who operates USA Basketball and he told me the NBA folks were ...

Vitto Brown looks to pass against Virginia Tech during a NCAA tournament first-round game on March 16, 2017, in Buffalo, N.Y. Brown had five points and two rebounds in 17 minutes during the 84-74 victory.