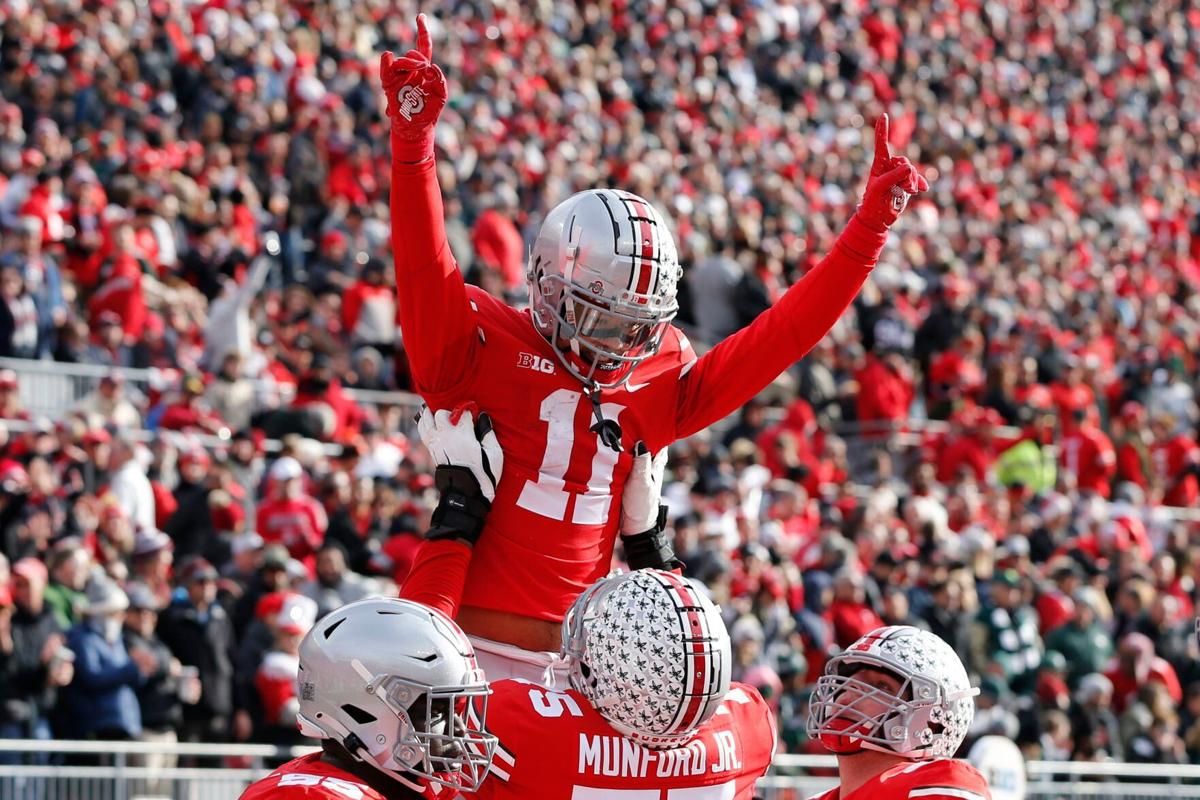 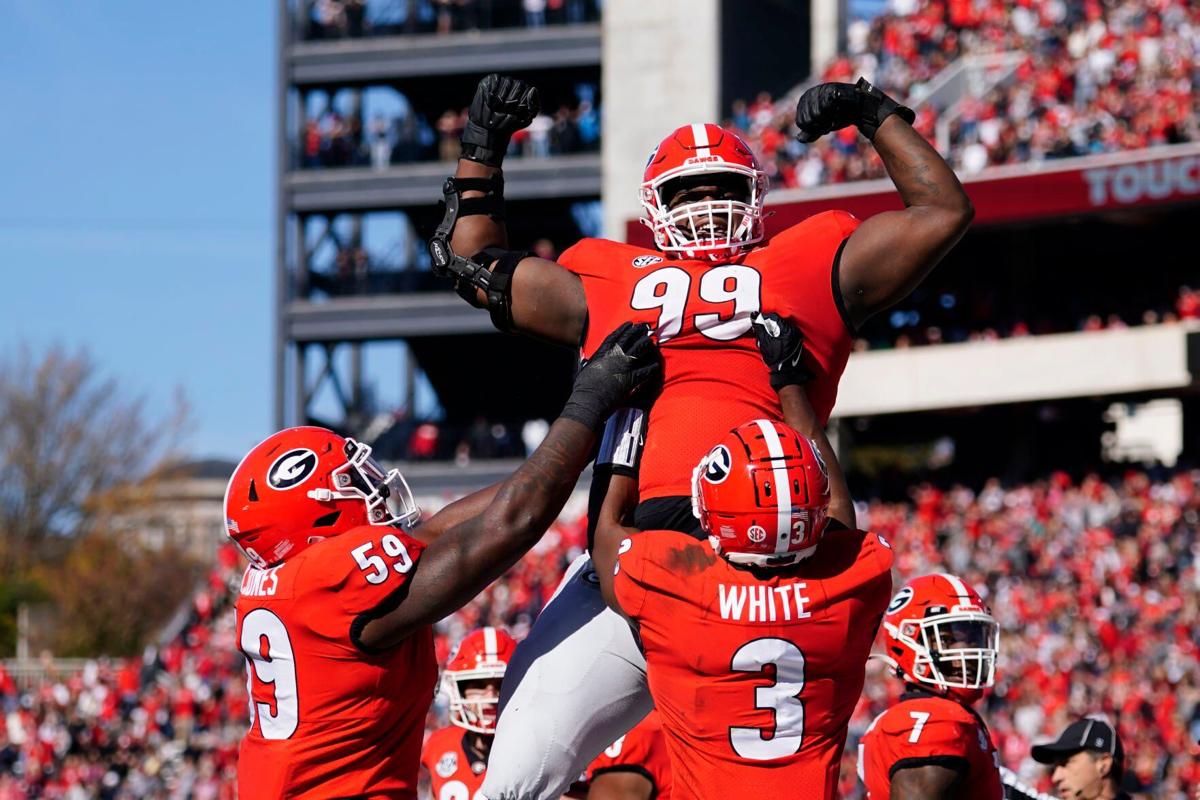 Georgia defensive lineman Jordan Davis (99) is lifted into the air by running back Zamir White (3) and offensive lineman Justin Shaffer (54) after scoring a touchdown in the first half of an NCAA college football game against Charleston Southern, Saturday, Nov. 20, 2021, in Athens, Ga.. (AP Photo/John Bazemore)

It took 12 weeks of regular-season play to have a turnover-free AP Top 25.

For the first time in 2021 all the teams that were ranked in The Associated Press college football poll presented by Regions Bank last week stayed ranked this week.

There were some significant changes near the top of the poll Sunday though, with Ohio State moving past both Alabama and Cincinnati into second behind No. 1 Georgia.

The Buckeyes' landslide victory against Michigan State, combined with Utah pounding Oregon created the opportunity for movement in the top 10. Overall four ranked teams lost, three to other ranked teams, moving the total for the season to 78.

Through 12 weeks of play, that's the second-most behind the 2018 season (83), according to the website College Poll Archive.

The lone victory by a unranked team over a ranked team on Saturday came in a game the unranked team was favored. Clemson topped Wake Forest, but it was not enough to get the Tigers (8-3) back in the Top 25 for the first time since last September.

Arkansas, which lost a one-score game to Alabama, managed to hang onto the final spot in the Top 25 by four points over Clemson, which was first among other teams receiving votes.

As the ranked teams finally begin to settle in there is less for Reality Check to complain about — but not nothing.

Next: vs. Georgia Tech, Saturday.

Reality check: DT Jordan Davis scored a touchdown on a 1-yard plunge and led the band after the Charleston Southern game. He might get another touch or two against the Yellowjackets.

Next: at No. 6 Michigan, Saturday.

Reality check: The Buckeyes are on pace to have three 1,000-yard receivers with Jaxson Smith-Njigba, Garrett Wilson and Chris Olave. Coming into this season, Ohio State has had five individual 1,000-yard receiving seasons in program history.

Next: at Auburn, Saturday.

Reality check: QB Bryce Young's Heisman chances come down to this: How well does he play against Georgia in the SEC championship. Any quarterback who can find success against that defense probably deserves the Heisman.

Ranked: Maybe a tad too high?

Next: at East Carolina, Friday.

Reality check: Bearcats responded when facing what was supposed to be a tough test by smashing SMU. Notable: RB Jerome Ford was back and healthy and ran for 83 yards and a touchdown.

Next: at Stanford, Saturday.

Reality check: QB Jack Coan has completed 73.7% of his passes during the Irish's six-game winning streak.

Reality check: Wolverines have one of the best pass defenses in the nation by just about every measure (54.6% completions against, 5.8 yards per pass), but they haven't faced anything remotely close to the Buckeyes.

Reality check: The Cowboys' defense is currently third in the nation in yards per play against (4.34). The last time a Big 12 team finished in the top three in that category was 2009 when Texas was first and Nebraska was third.

Next: at Mississippi State, Thursday.

Reality check: Matt Corral has had a tremendous season and might be the first quarterback drafted in April, but at this point he is more of a fringe Heisman candidate than a serious contender.

Next: vs Texas Tech, Saturday.

Reality check: Bears need a victory and some help to reach the Big 12 title game. They enter the week with some uncertainty around QB Gerry Bohanon, who left the victory at Kansas State with an apparent right leg injury.

Next: at No. 7 Oklahoma State, Saturday.

Reality check: Strange season for the Sooners' offense. They rank fourth in the nation in yards per play (6.94), but have had five games where they were held under 6.0, including the last two.

Next: vs. Oregon State, Saturday.

Reality check: The Ducks' can still reach the Pac-12 title game by beating the Beavers, but they'll have to do it with a depleted group of receivers due to injuries to Johnny Johnson III and Jaylon Redd and the departure of Mycah Pittman.

Next: vs. Penn State, Saturday.

Reality check: Spartans' point differential in the Big Ten is plus-six. That's one point fewer than Nebraska, which is 1-7 in the conference. It's been a great year for Spartans, but fair to call them overachievers.

Next: at USC, Saturday.

Reality check: Is the Cougars' next game a job interview for coach Kalani Sitake?

Next: at LSU, Saturday.

Next: at North Texas, Saturday.

Reality check: Roadrunners have five one-possession victories and none wilder than beating UAB with a last-second touchdown pass on Saturday.

Next: at Colorado, Friday.

Reality check: No team in the country is so reliant on its tight ends. The versatile Brant Kuithe (41 catches, 487 yards and five TDs) and Dalton Kincaid (25 for 349 and five) are Nos. 1 and 2 in yards receiving, and Cole Fotheringham also has 13 catches.

Next: at Nebraska, Friday.

Next: at Minnesota, Saturday.

Reality check: QB Graham Mertz is coming off his best three-game stretch of the season, completing 72% of his passes. Sure, it's only 54 attempts, but he's averaging 10.5 yards per throw..

Next: at UConn, Saturday.

Reality check: CB Marcus Jones is tied for the national lead with five interceptions to go along with his four return touchdowns on special teams.

Next: at Syracuse, Saturday.

Reality check: WR Jordan Addison leads the nation with 15 touchdown catches after a career-game against Virginia with 14 catches and four scores.

Next: at Boston College, Saturday.

Reality check: Deacs' defense has allowed more than 300 yards rushing in two of the past three games and four times on the season.

Next: vs. Boise State, Friday.

Reality check: No ranked team has thrown for fewer yards than the Aztecs at 141.9 per game.

Next: vs. Louisiana-Monroe, Saturday.

Reality check: Ragin' Cajuns like to play ground and pound, but the running game has been a bit of a grind over the last four games averaging 4.03 yards per carry. on 159 attempts.

Next: vs. North Carolina, Friday.

Reality check: A victory in the rivalry game and a loss by Wake Forest sends North Carolina State to the ACC title game of the first time.

Next: vs. Missouri, Friday.

Ranked: About right though Clemson would be fine here, too.

Follow Ralph D. Russo at https://twitter.com/ralphDrussoAP and listen at http://www.westwoodonepodcasts.com/pods/ap-top-25-college-football-podcast/

What we can learn from Wisconsin football's offensive coordinator job posting

The job listing to be the Badgers' offensive coordinator is light on details, but it does reveal some nuggets of information.

Longtime Badgers assistant coach Bob Bostad will lead the offensive line once again, a role he held from 2008-11.

Bobby Engram is the Badgers' target as offensive coordinator, according to two ESPN reporters.

With a strong arm and poise in the pocket, Badgers freshman quarterback Deacon Hill has made believers out of starters on Wisconsin's defense who practiced against him this season.

The Badgers are adding a third experienced cornerback from the transfer portal, with former Kentucky starter Cedrick Dort Jr. set to join UW. Dort Jr. played in 44 games over five years with the Wildcats.

Open Jim: Why the 2023 season could be a special one for the Wisconsin football program

How Wisconsin linebacker Jack Sanborn was molded by his strong, selfless mother

Malinda Sanborn set a hardworking, loving example for Badgers inside linebacker Jack Sanborn and his two brothers. A look at how she impacted one of Wisconsin's defensive stars.

The Badgers linebacker proposed to his girlfriend, Randi Siebenthal, at a Las Vegas landmark on Wednesday then recorded nine tackles and his eighth sack of the season in Wisconsin's win over Arizona State.
1 of 2

Georgia defensive lineman Jordan Davis (99) is lifted into the air by running back Zamir White (3) and offensive lineman Justin Shaffer (54) after scoring a touchdown in the first half of an NCAA college football game against Charleston Southern, Saturday, Nov. 20, 2021, in Athens, Ga.. (AP Photo/John Bazemore)