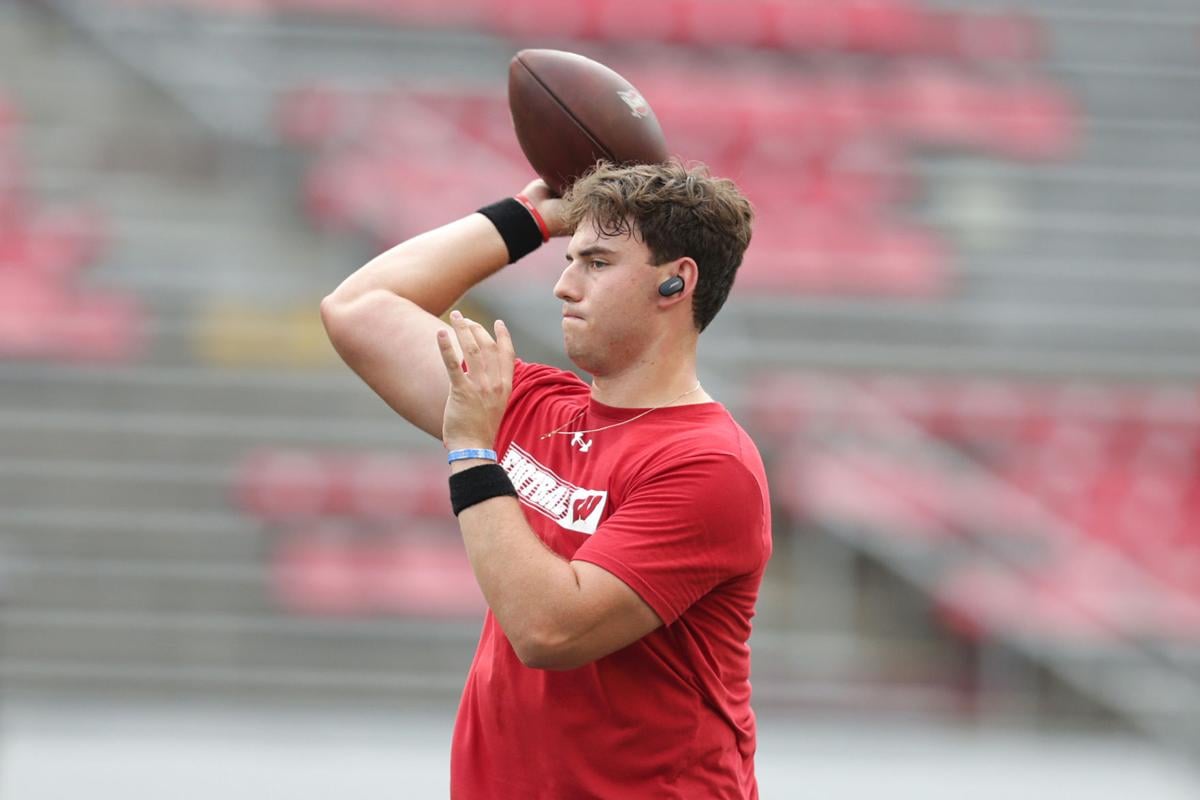 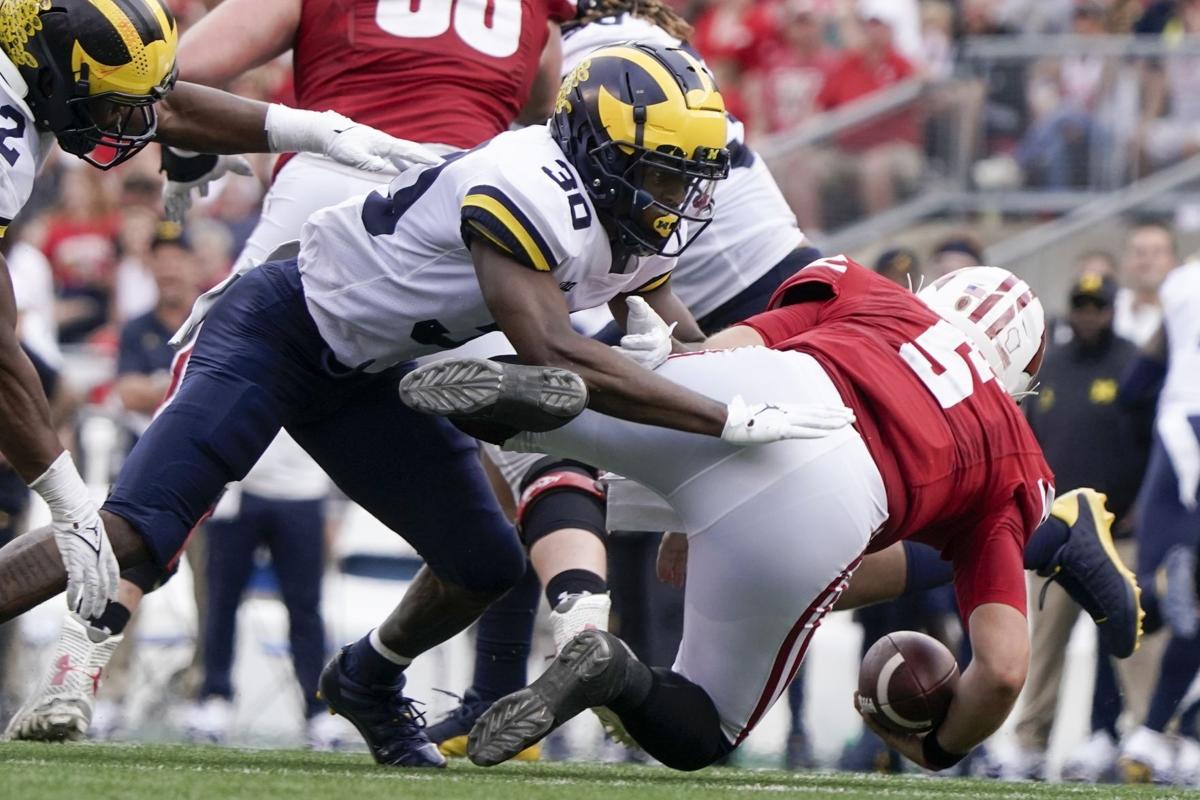 Michigan's Daxton Hill hits Wisconsin's Graham Mertz during the second half of the Badgers' 38-17 loss to the Wolverines Saturday at Camp Randall Stadium in Madison. Mertz was hurt on the play and left the game.

University of Wisconsin quarterback Graham Mertz left Saturday's game against Michigan in the third quarter after absorbing a sack that appeared to injure his left side.

Mertz went into the injury tent on the Badgers' sideline after staying down on the field after the hit just 51 seconds into the third quarter. After leaving, he went to the Badgers' locker room accompanied by an athletic trainer.

UW coach Paul Chryst said during his postgame news conference that Mertz was taken to a hospital for precautionary reasons. Mertz was released Saturday afternoon, per a UW official. His playing status going forward is to be determined.

UW tight end Jake Ferguson also went to the locker room at the same time. The Badgers announced both had chest injuries and were questionable to return.

Rapid replay: QB Graham Mertz injured as Wisconsin football drops to 1-3 for the first time since 1990

Michigan's Daxton Hill went in untouched on a delayed blitz and got a free shot on Mertz's blind side.

The Badgers quarterback and the UW offense started slow Saturday, going three-and-out on their first four drives. But Mertz engineered a touchdown drive late in the second quarter that cut Michigan's lead to 13-10. He connected with Chimere Dike for 36 yards to the Wolverines' 18 with 13 seconds remaining, then for a score on the next play.

Junior Chase Wolf replaced him on the Badgers' next drive.

Get to know the Wisconsin Badgers' 2022 football recruiting class

Myles Burkett became the Badgers’ first Class of 2022 recruit when he announced his decision in January.

The 6-foot-1, 200-pounder from Franklin is a three-star recruit per 247Sports and Rivals, and showed great mobility and arm strength in his junior season. He battled back from a knee injury as a sophomore to throw for 1,236 and 11 touchdowns and rush for 180 yards and a score in a pandemic-shortened season.

He’s the first in-state quarterback to earn a scholarship out of high school since 2011.

As his recruiting stock started to rise, the Badgers were able to secure a commitment from Fall Rivers’ Barrett Nelson in late June.

The offensive tackle was 6-foot-6 and 255 pounds after his junior season, and his quickness off the ball has made him a load on both the offensive and defensive lines. Nelson is a three-star recruit per 247Sports and a two-star on Rivals.

He had offers from Iowa State, Northwestern, Nebraska, Purdue and others before choosing UW.

Seagreaves is an intriguing prospect for the Badgers — at 6-foot-6 and 220 pounds, he has the physical frame to grow into an imposing tight end, and he possesses sprinter speeds. He’s averaged more than 21 yards per catch each of the past two seasons and was starting to gain more Power Five conference interested when he committed to UW.

Seagreaves is a three-star recruit per 247Sports and a two-star according to Rivals.

Excited to announce I am officially a Wisconsin Badger!🔴⚪️ @BadgerFootball #Committed pic.twitter.com/AotFjncvN3

In multiple trips to UW’s campus in June, Cade Yacamelli was called “a football player” by UW coaches rather than locking him into a position. He earned a scholarship offer after an impressive camp workout and accepted it in late June.

The consensus three-star athlete was starting to earn more recruiting attention from Power Five schools when he accepted the Badgers’ offer. UW was the first Power Five offer for the 6-foot, 200-pounder. He’s played receiver, running back and defensive back in high school, but likely projects as a receiver or defensive back in college.

The Penn Trafford High School product has good quickness and change-of-direction that make him dangerous with the ball in his hands.

When A’Khoury Lyde accepted a UW scholarship offer in late June, he became the first player on the defensive side of the ball to commit in the 2022 class.

Lyde (5-foot-11, 170 pounds), a consensus three-star recruit, has strong ball skills and a willingness to hit that separates him from other cornerbacks.

The Wayne, New Jersey, native is the eighth-ranked player in his state, per Rivals.

The DeWitt, Michigan, native stands 6-foot-5 and weighs 200 pounds. He uses his body to shield off defenders at the point of the catch and does well catching the ball away from his body. His Hudl page lists a 4.47-second 40-yard dash time, and he has breakaway speed when he gets in the open field and can use his long strides.

Neal — a 6-foot-2, 310-pounder — had more than 25 scholarship offers, and reportedly was deciding between UW and Ohio State at the end of his recruiting process. Neal is a product of William Amos Hough High School in Cornelius, North Carolina, where the Badgers found receiver Devin Chandler in last year’s cycle.

Neal, with his size and strength, likely fits best as a nose tackle in the Badgers’ 3-4 scheme.

Thank you mamma. Now dry your eyes, you made a man of I❤️ pic.twitter.com/vNj7Smipek

Jim Leonhard may have found another rangy, smart cornerback to add to his secondary in Avyonne Jones, who committed in to UW in late June.

Jones — who hails from Southlake, Texas — was on campus the weekend of June 18 for an official visit and had narrowed an extensive offer list to UW and California. The 5-foot-11, 180-pound defensive back was previously committed to Oklahoma State, but retracted that commitment in late May.

With good recovery speed and a good feel for getting his hands between a receiver’s at the point of the catch, the consensus three-star prospect is a good fit for what UW cornerbacks coach Hank Poteat said he wants from his position group.

The Badgers landed the top-ranked player in Wisconsin for the sixth consecutive recruiting class when Joe Brunner committed the last week of June.

Brunner — a 6-foot-6, 300-pound prospect from Milwaukee who attends Whitefish Bay High School — is a consensus four-star recruit and a top-10 offensive tackle in the nation.

He held at least 16 Power Five scholarship offers, including ones from a majority of the Big Ten Conference, LSU, Notre Dame, Oregon and Tennessee.

Possessing a good burst of speed and long arms that extend his catch radius, the 6-foot-1, 170-pound Anthony has a chance to play across the formation as a receiver.

Austin Brown — who hails from Johnston City, Illinois, a small town outside of Carbondale — was considering offers from Boston College, Illinois, Michigan and Northwestern before choosing UW. The consensus three-star prospect had 21 known scholarship offers.

Brown committed to UW on the Fourth of July.

At 6-foot-1 and 195 pounds, he has a good frame already and his high school film shows a willingness to lay big hits and attack blockers. He also plays quarterback for Johnston City.

The Badgers locked in their first incoming transfer of the class in late October in Kalon Gervin, a cornerback from Michigan State.

Gervin played in 19 games for the Spartans, including seven career starts. He had 22 tackles, four pass breakups and a fumble recovery at MSU. The 5-foot-11, 180-pounder from Detroit will add some experience to a cornerback group that loses its top two starters to graduation.

Gervin was offered a scholarship by UW coming out of high school.

UW added an athletic defensive line prospect in mid-November when Tristan Monday flipped his commitment from Arizona to the Badgers.

UW was interested in Monday since he arrived in high school, but his size then didn't lend itself to a natural position fit in the Badgers' defense. Now standing 6-foot-4 and weighing 240 pounds, he'll start his career as a defensive end. UW offered him a scholarship in early November and he accepted it after visiting campus Nov. 12-14.

Monday is a consensus three-star recruit from Scottsdale, Arizona, who had offers from Arizona, Baylor, Colorado, Florida State and Iowa State.

After much discussion and thought, Tristan has changed his commitment and will be accepting a football scholarship offer from the University of Wisconsin. He has the utmost respect and admiration for the University of Arizona but this is an opportunity he cannot ignore. pic.twitter.com/hqf8GGqZwp

Vaughan, a 6-foot-4 linebacker from Walled Lake, Michigan, committed to UW in late November, choosing the Badgers over offers from programs like Colorado, Florida State, Illinois, Iowa, Minnesota and others.

Vaughan is rated as a three-star recruit by 247Sports and Rivals.

Vaughan has been a late-riser on the recruiting trail, with all of his Power Five offers coming since October, but he has potential to be an inside or outside linebacker for the Badgers. He could fill the big-bodied outside ‘backer role that C.J. Goetz currently has for UW or could be a hybrid type of linebacker like UW pulled in with Jake Ratzlaff in the 2021 cycle.

All glory to god🙏

"Jump Around" had a different feel during the Badgers football team's Saturday loss to Michigan.

Photos: Wisconsin beat up, falls to No. 14 Michigan at Camp Randall

Check out all the action from another disappointing Badgers loss:

Michigan's Daxton Hill hits Wisconsin's Graham Mertz during the second half of the Badgers' 38-17 loss to the Wolverines Saturday at Camp Randall Stadium in Madison. Mertz was hurt on the play and left the game.