On one side was a team in a tough spot at a tough time. On the other was a coach whose desire to be part of a team again was reaching a boiling point.

The University of Wisconsin football team needed a new inside linebackers coach for a second time since the 2021 season ended. It was May — after spring practices, after players had started building bridges to a new position coach — and the Badgers staff had what could have been a difficult transition to make.

“Who’s still out there that has the experience, has the knowledge, has the personality, the coaching style, the culture fit?” defensive coordinator Jim Leonhard remembers thinking. “Who’s out there?”

In Houston, Mark D’Onofrio was 3½ years removed from his last job in college football. That number was starting to get uncomfortable.

D’Onofrio saw the news of Bill Sheridan’s mid-May resignation from UW in the aftermath of a report that connected Sheridan to potential NCAA recruiting violations at Air Force two years earlier. D’Onofrio worked his connections to see who could put in a good word for him at UW.

Three weeks later, he was in Madison to explain to coach Paul Chryst, Leonhard and others how his experience working with various schemes at seven schools since 1999 could fit the Badgers’ short-window need.

It ended up being a fit for both sides, the Badgers getting someone who didn’t need much runway to get off the ground and D’Onofrio getting back into the game that he said has been so good to him.

“I certainly hate how we got to it,” Chryst said, “but I feel really fortunate that he’s with us.”

Chryst was clear that anyone who was willing to bail on another college team less than three months before the start of fall camp wasn’t the kind of person he was looking for to fill out his staff. D’Onofrio didn’t have that baggage but he knew that he was stepping into a potentially fragile situation.

Sheridan started establishing himself with the team during spring ball but didn’t stay much beyond it because of the recruiting violation allegations.

The inside linebacker position already was in flux because of the departure of Leo Chenal and Jack Sanborn, mainstays whose play meant there wasn’t a lot of on-the-job learning for the crew that’s back for the 2022 season.

D’Onofrio said his approach upon entering the picture as the third coach at his position in less than a year was to let players tell him what kind of coaching has helped them and what hasn’t.

“Don’t make a change just to make a change,” he said. “At the end of the day, something that was working really well, let’s stick with it. I’ll learn the verbiage and things that I need to say instead of making it confusing for the players.”

He has been through enough changes in his college football coaching career that it’s not a difficult adjustment on his side.

D’Onofrio, 53, got his start coaching linebackers at St. Peter’s College, a non-scholarship Division I-AA team in his home state of New Jersey in 1999. After a year at Georgia, he found a spot on new Rutgers coach Greg Schiano’s staff in 2001.

Then it was on to Virginia, Temple, Miami and Houston, with D’Onofrio serving as defensive coordinator in the last three stops. He was fired after the 2018 season by Houston, which finished last in the FBS in pass defense.

That’s where his college coaching journey stalled. He used the last three years to help with his son’s youth football team and connect with friends in the coaching profession by watching video and giving feedback.

Now D’Onofrio is back in Wisconsin, where his pro football career began and ended, and developing ties with players and coaches.

“The timing is unique but he fits us,” Leonhard said of D’Onofrio. “He’s hard nosed. He’s coached his guys hard. He expects a lot out of his guys but he loves them. And he’s going to do anything to help players reach their max.”

“He loves to hang out. He loves to talk with us, get our feedback,” Lytle said. “We love to hear what he has to say also, terminology-wise, everything. It’s really helped everybody in the room, from freshmen to seniors, learn the defense really well and better than we even thought we did before.”

It would be easy to conclude that D’Onofrio’s 2½-year history with the state of Wisconsin in the 1990s doesn’t inspire the fondest of memories for him.

Thirty years ago, he was just getting into training camp as a second-round pick of the Green Bay Packers. His arrival was delayed because he hadn’t yet agreed to terms on a contract.

Then the setbacks started, the first a pulled muscle in warmups before his first practice. He was over-exuberant in his preseason debut at inside linebacker against New England at Milwaukee County Stadium, drawing flags on consecutive plays.

Still, D’Onofrio was a starter to open the season before his career took a wicked turn in the second game of the season, Sept. 13, 1992, at Tampa Bay.

It was a forgettable 31-3 loss for the Packers, notable years later only because it included Brett Favre’s first completion with the team — a pass the Hall of Fame quarterback also caught for a 7-yard loss after it was deflected back at him by a Buccaneers lineman.

D’Onofrio left in the fourth quarter with a hamstring injury on that 90-degree, humid September day in Florida. A photographer later captured an image of D’Onofrio sitting with his left leg heavily wrapped and with his bowed forehead leaning on his right hand. It was the last time he was in uniform for a pro football game.

The Packers put him on injured reserve two days later, hopeful that a month or two of rehab would get him back into the lineup. But it was a gruesome hamstring tear that eventually needed a then-unusual surgery in February 1993.

His recovery was progressing well but he hadn’t returned to full speed when D’Onofrio suffered a second blow later in the year. This one was a lower abdominal muscle injury from a weightlifting session. It required surgical repair in September 1993, ending his hopes of playing that season.

By May 1994, it was all over. D’Onofrio failed a physical with the Packers and was waived injured. He was 25 and reportedly reached a $150,000 settlement with the team and could collect on a $1.25 million insurance policy for an injury ending his playing career.

Time has allowed D’Onofrio to have a big-picture view of that period in his life.

“It was about as adverse as it gets for somebody who works their life to get to that point,” he said. “But I just look at it that, from that point, I had an opportunity to move on to other things. And then eventually you look at it from the perspective that, hey, I wouldn’t have the kids that I have, I wouldn’t be married to the woman I’m married to, all those sorts of things.

It’s a change of perspective now for D’Onofrio, and a whirlwind one. He opted for a fresh look at evaluating UW’s players starting with last Wednesday’s opening of camp. There’s an opportunity for more inside linebackers to earn playing time by standing out in practice before the Sept. 3 season opener against Illinois State.

While he was looking for his next college position, D’Onofrio wanted a job that he felt like he could stay in for a while.

“This is one of the premier programs in the country, and linebackers that have played here have been phenomenal,” he said. “So to coach inside linebackers at the University of Wisconsin was one of those opportunities that you live for if you do what I do.”

With Camp Randall Stadium renovations taking shape, check out the progress so far

Amazing the progress that was made in this first full week of work. #CRFuture #LetsGetErrDone pic.twitter.com/IxM7IwkPiL

It's coming along! #OnWisconsin pic.twitter.com/zCsRaEkaOa

How it started ➡️ How it's going

This place is going to be really special when it's done ... if you're interested in being there in the first season ... Click here ⤵️https://t.co/gydd4uVFTe pic.twitter.com/XFFEbRsOYn

Interested? Learn more about our new premium seating at Camp Randall in the link below.

You can really start to #CRFuture now! 🏗🚧🔨

Sign up now for more info on how you can enjoy the benefits this fall: https://t.co/FO53B8wYRX pic.twitter.com/T1ZCb6kWGj

80 Days/Tweets til Opener. As a frosh backup, Jack Sanborn had 7 tackles at ILB. The following season, he took over as a starter and had ‘80’ stops. Will history repeat itself at the position? Jordan Turner had 6 tackles (24 snaps on defense) in ‘21. But looms as a starter in ‘22 pic.twitter.com/wCXJotEAtQ

See where the Badgers are ranked by a panel of 65 college coaches heading into the season.

White announced his retirement Thursday, ending one of the winningest NFL careers for a former Wisconsin football player.

Two people familiar with the negotiations told The Associated Press on Tuesday that the Big Ten was looking for a seven-year deal worth $380 million per year from ESPN, and the network declined

Wisconsin's right tackle position is up for grabs between Logan Brown, Riley Mahlman and Nolan Rucci. Here's a look at how they are approaching the competition.

Thoughts on the evolving competitions at right tackle and inside linebacker, a wide receiver coming into his own and a quarterback showing improvement.

The Badgers are looking to replace a pair of multi-year starters at wide receiver, and Skyler Bell is proving up for the challenge.

Quick observations on the initial episode of Wisconsin's "The Camp" video series, which focuses on two leaders in the football program.

Jackson Acker switched in the offseason to fullback for UW. Here's why coach Paul Chryst already is saying, "really talented, like him" about the former Verona standout. 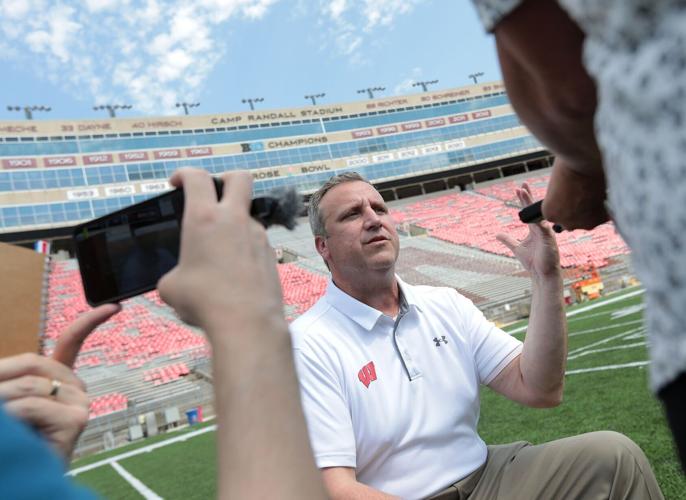 Mark D'Onofrio is the Badgers' third inside linebackers coach since the end of the 2021 season. 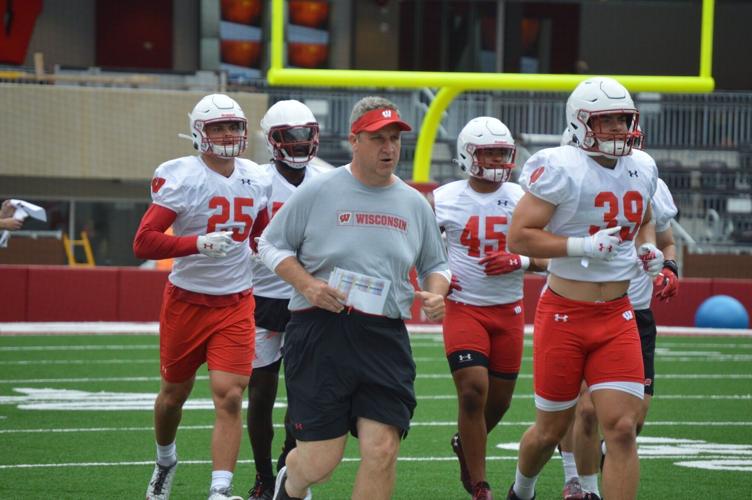 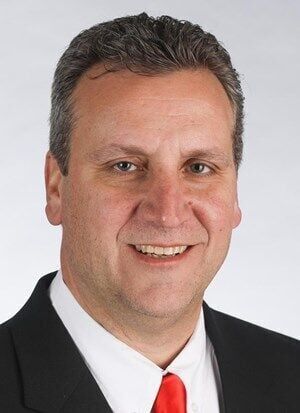