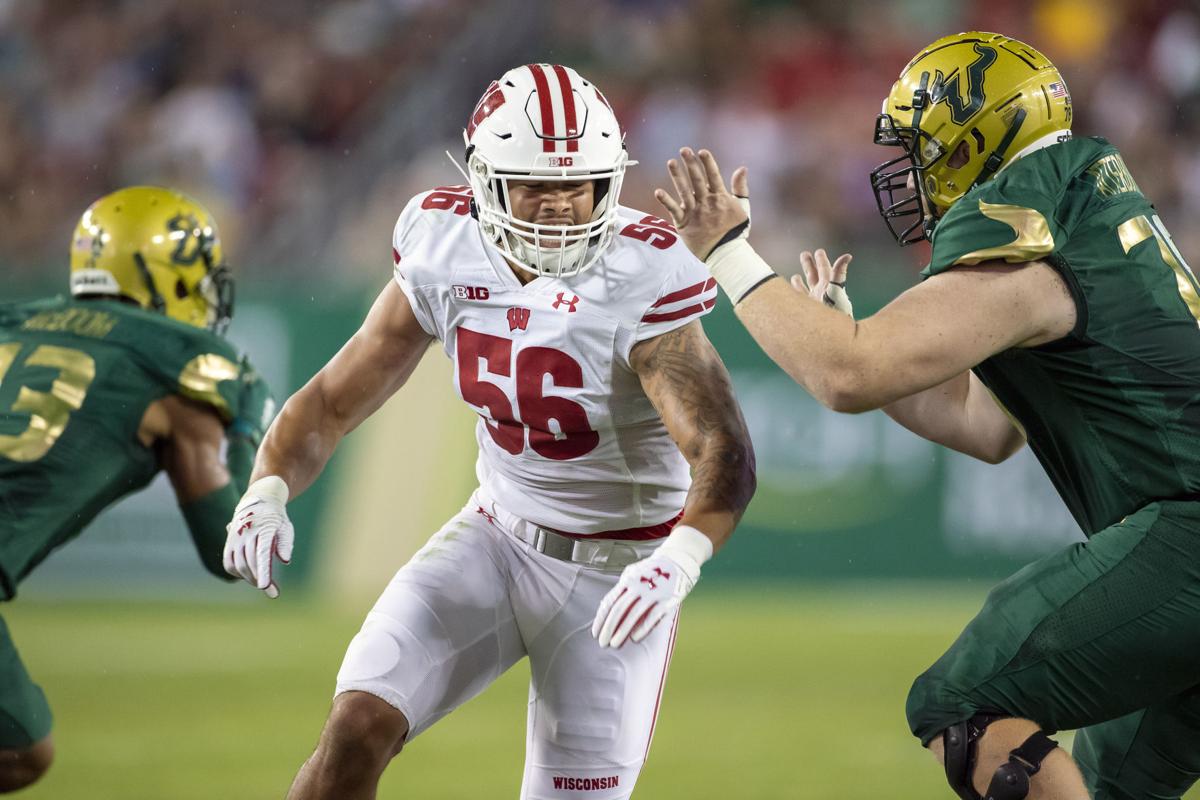 Senior outside linebacker Zack Baun worked hard in the offseason to become a better pass rusher. He has a sack in each of UW's first two games this season. 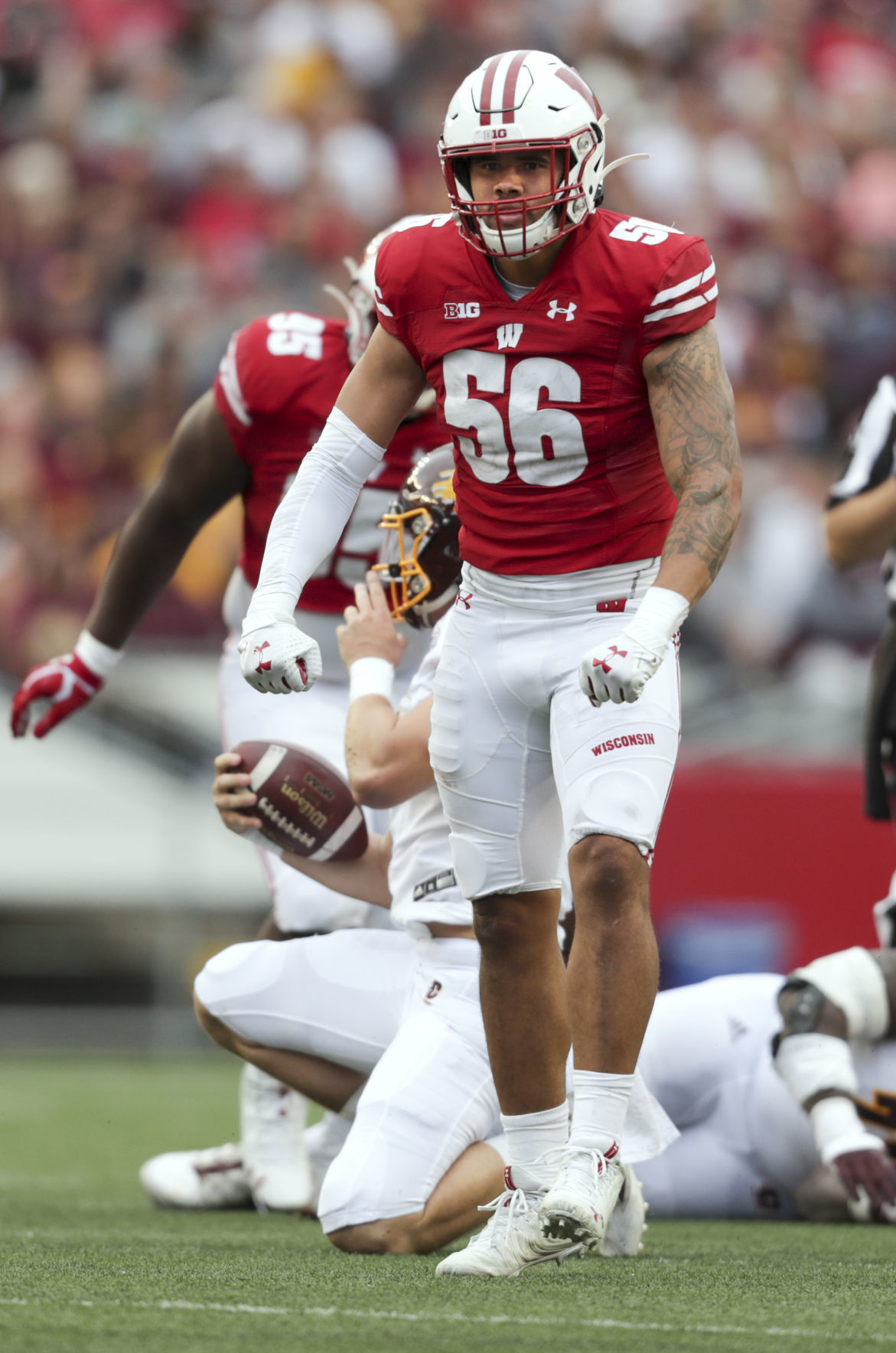 Zack Baun revels in his sack against Central Michigan in the Badgers' 61-0 win Sept. 7 at Camp Randall Stadium.

Back in the summer of 2013, Rob Green walked into what was then a brand-new fieldhouse in the Brown Deer school district one evening and noticed a bunch of teenagers playing a pick-up basketball game.

One of them, a stranger to Green, stood out immediately. The athletic build and huge calves caught Green’s eye, as did the young man’s ability to elevate above the rim.

Green was curious, so he asked around and was told the new kid was a transfer from West Bend. Green was thrilled to hear this athlete also played football, the sport Green coached.

Baun’s enthusiasm for the sport began to fade during the two years he spent at West Bend East, where he’d had a bad experience. By the time his family completed the move to Brown Deer, Baun viewed himself as a basketball player and was ready to leave the gridiron in his rear-view mirror.

But Green and others wouldn’t give up without a fight. Brown Deer had a strong junior class and some of Baun’s new friends put on a full-court press to get him to join the team. So did Green, who made his recruiting pitches via text message.

“I think my wife thought I was courting someone else,” Green said.

Late July rolled around and Brown Deer began a stretch of four contact days. Baun didn’t show up the first day, but Green ran into him in the weight room the following morning. Again, Green had a recruiting pitch ready to go: “We’re fast. We run spread. I think you could help us, and I think we could help you,” Green said. “He said ‘maybe.’ For the first time, he didn’t tell me no.”

Later that day, Baun showed up at practice. He lined up as a slot receiver and, the first time he touched the ball in a 7-on-7 setting, Baun caught a pass and went 50 yards for a score. That wasn’t even the most impressive part: It was his long throw back to the quarterback from the goal line that made Green and his assistants take notice and wonder if they had Baun playing the wrong position.

It wasn’t until the next week that Green, in Oshkosh for the WFCA all-star games, received a text that made him ecstatic and set Baun on course for a career with the University of Wisconsin football team.

UW coach Paul Chryst and his staff couldn’t help but notice that the Badgers’ four starting linebackers last season — Baun and Andrew Van Ginkel on the outside, T.J. Edwards and Ryan Connelly on the inside — were all quarterbacks in high school. So was T.J. Watt, a star outside linebacker for the Badgers a few years earlier.

Baun orally committed to the Badgers when Gary Andersen was the coach. But during the transition period in late 2014, after Chryst was hired to replace Andersen and was firming up the 2015 recruiting class, it was easy for the new staff to spot what the old staff had seen in Baun.

The 46-second clip UW put together for Signing Day starts with Baun coming around the edge and delivering a vicious hit on a quarterback just as he’s releasing a pass, the poor kid’s body contorted in mid-air before he’s driven into the ground. The remaining two clips are of Baun as a quarterback: a 58-yard touchdown run that includes a sharp cut and a stiff arm; and one from about 25 yards out in which Baun ducks at one point to avoid a tackler, then weaves his way through traffic en route to the end zone.

Baun, like Connelly, Edwards, Van Ginkel and Watt, was never going to be a quarterback at UW. But it’s easy to understand why a college coach would look at those clips and see a prospect smart enough to play quarterback and dripping with athleticism.

“I think there’s a ton of value in that,” Chryst said.

Green’s promise of putting Baun in a favorable system held true. Baun flourished in the spread offense, with Brown Deer using jet sweeps to open up the middle of the field for him to execute run-pass options. In 22 career games for the Falcons, he accounted for 67 touchdowns on the ground and another 27 through the air.

But he played limited snaps on defense. “I would just go in and play end-of-the-game situations, got-to-have it situations,” he said.

As defensive coordinator Jim Leonhard notes, a lot is expected of outside linebackers in UW’s system. They have to set the edge on runs, help out in pass coverage and, of course, are the primary wreakers of havoc in the backfield.

Baun admits it took some time to get comfortable with the Badgers. He redshirted in 2015, played sparingly the following season and missed the 2017 season with a broken left foot he sustained in preseason camp.

He started all 13 games last season and was third on the team in tackles with 63, but his sack total (2½) was low.

“It wasn’t natural, it was a process, he (didn’t grow up) being that outside linebacker and defensive lineman,” Leonhard said. “He was playing quarterback. I think just a credit to him, the work that he’s put in to learn football and learn the game and kind of understand who he is and how he’s going to have success.”

Baun went to school in the offseason in an attempt to become a better pass rusher. That process included talking to Watt — “He gave me a lot of tricks and tips,” Baun said — and watching cutups of other NFL pass rushers.

There was also the matter of working on his body so he’d be quicker and more explosive off the edge and technical aspects of pass rushing such as how he uses his hands.

If that text message to Green six years ago was Baun’s I’m-in moment at Brown Deer, this offseason was his all-in moment at UW.

“It’s my senior year, why not leave it all out there?” Baun said. “It’s my last opportunity, last moment here in Wisconsin and alumni always come back and talk about how much they miss the college feel and being with the guys.”

Baun has a sack in each of the first two games, nearly matching his total from 2018. The challenge gets more difficult from here, starting Saturday when he could go head-to-head with Michigan senior left tackle Jon Runyan when the No. 13 Badgers (2-0) host the No. 11 Wolverines (2-0) at Camp Randall Stadium.

Numbers aside, UW coaches have noticed something else that’s changed in Baun: He’s more mature and has embraced a leadership role on a defense that includes only one other senior starter, middle linebacker Chris Orr.

“It’s been impressive to watch and it’s fun,” Leonhard said, “because that’s exactly what that room needed this year is for him to step into that role.”

Green and Baun still chuckle every now and then about how close the latter came to walking away from football. Both are glad he made the decision to give it another try, and they’re not alone.

“Zack is truly one of those guys,” Chryst said, “if we’re going to be the best team we can be and the best defense, he’s got to be a big part of it.”

Who has the edge when the Wisconsin Badgers host the Michigan Wolverines in the Big Ten opener?

Wisconsin State Journal reporter Jim Polzin breaks down the matchup between the No. 13 Wisconsin Badgers and the No. 11 Michigan Wolverines on…

When the Badgers beat Michigan 13-10 at Camp Randall Stadium on Oct. 30, 1993, elated UW fans tried to rush the field. But euphoria quickly tu…

Review the University of Wisconsin 2019 football season, with players to watch and Big 10 stats comparison. Test your Badgers knowledge with the jersey number quiz!

Get to know the Wisconsin Badgers' 2020 football recruiting class

Senior outside linebacker Zack Baun worked hard in the offseason to become a better pass rusher. He has a sack in each of UW's first two games this season.

Zack Baun revels in his sack against Central Michigan in the Badgers' 61-0 win Sept. 7 at Camp Randall Stadium. 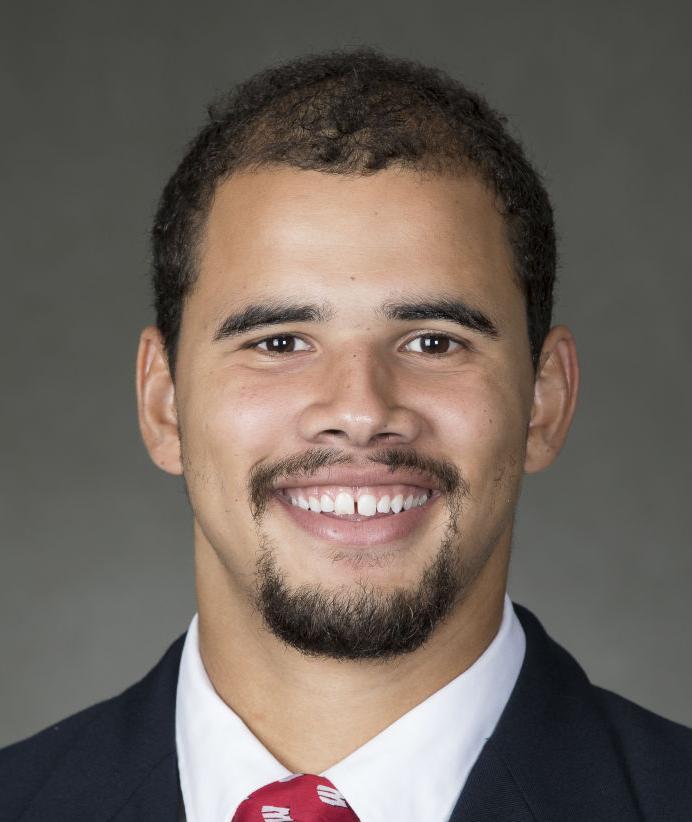