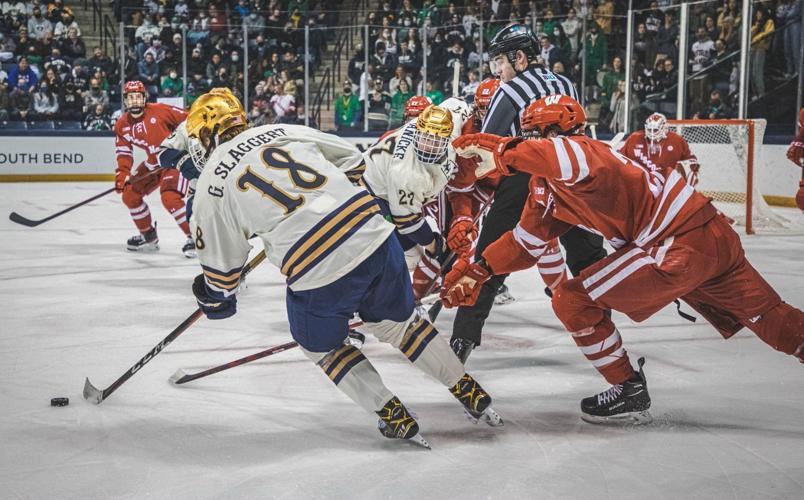 Notre Dame's Graham Slaggert gets to the puck ahead of UW's Josh Ess after a faceoff during Saturday's game. 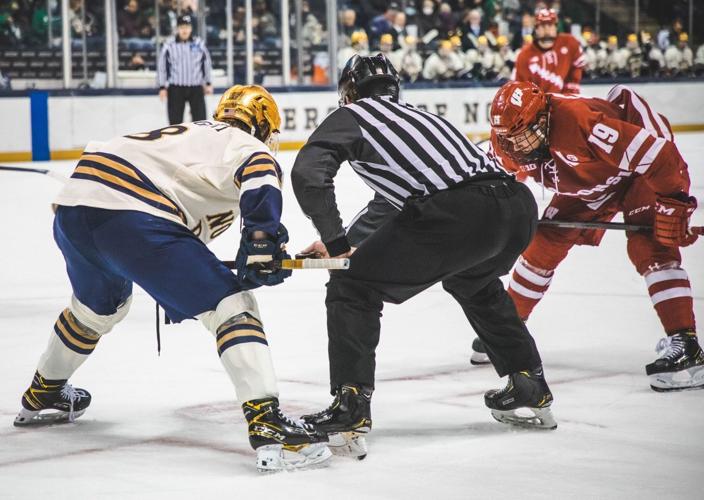 SOUTH BEND, Ind. — The records being set by a University of Wisconsin men’s hockey team that can’t find a consistent offensive touch are deeply unflattering.

Two came as a result of a 3-0 loss to No. 15 Notre Dame on Saturday, giving the Fighting Irish a two-game sweep of a series in which goaltender Matthew Galajda held the Badgers to one goal.

Rack up another game in which the Badgers scored fewer than two goals. That’s eight this season, the most in the opening 12 contests in the team’s 59-year modern era.

And the 20 goals that the Badgers have scored is the fewest through a dozen games in a modern season.

“Obviously there’s some frustration,” Badgers forward Jack Gorniak said. “Worrying about it and panicking and carrying things over into the next week and the next weekend just makes things worse.”

It’s not that the Badgers haven’t been offensively productive at times. They showed against Michigan and Minnesota in their first two Big Ten series that they can score.

Badgers' small mistakes, subpar efforts in 2nd period add up in loss to No. 15 Notre Dame

The games against Notre Dame were a reminder, however, that teams that play the Badgers physically have generally had the advantage.

“That’s not our style, to go run another team out of the building,” UW coach Tony Granato said. “You’ve got to be able to take the hits to make plays. You’ve got to understand that’s part of it. So the answer is no, we’re not going to go change and all of a sudden try to play that style of hockey.”

What the Badgers could have done was make Notre Dame back off by capitalizing on some of their power-play chances. UW went 0-for-6 Saturday.

And Notre Dame picked up where it left off on its power play in a 5-1 victory on Friday. The Irish scored on their last two chances in the opener, then went ahead Saturday with Grant Silianoff’s first-period goal.

Badgers captain Tarek Baker, who rejoined the lineup after missing Friday’s game with a lower-body injury, ended UW’s third power play of the opening period early with a slashing penalty. Six seconds later, Notre Dame had a critical second goal to take a two-goal advantage into the first intermission.

Max Ellis helped out center Solag Bakich off the faceoff by tapping the puck back to defenseman Chase Blackmun at the right point. Blackmun moved it left to Nick Leivermann, who waited and used Badgers defenseman Tyler Inamoto as a screen to fire past Cameron Rowe’s blocker.

“That was just a miscommunication, I think,” said Sam Stange, who was in the faceoff circle for the Badgers on the play. “He moved it over to a guy that neither me or Jack (Gorniak) had. It put (Inamoto) in a tough spot and it put (Rowe) in a tough spot.”

Chasing a Notre Dame team that can seal off the defensive zone as well as anyone is a bad idea, and falling into a two-goal hole in the final minute of the first period put the Badgers in an especially difficult spot.

UW couldn’t generate many good zone entries in the second period against a strong Irish back line, and Notre Dame (8-3, 2-2-0-0) essentially put the game away by scoring another goal in the final minute of a frame.

Hunter Strand withstood pressure from Ryder Donovan in front of the net and tapped in his own rebound after a hard rebound off the back boards set off a scramble.

The Badgers lost competitions, were slow to react at times and made some poor decisions with the puck during the series. They absorbed two losses because of it.

“They won more puck battles than we did, and that kind of killed us,” Gorniak said.

Matthew Galajda made 22 saves for his 21st career shutout as Notre Dame completed a sweep of the Badgers.

Badgers' small mistakes, subpar efforts in 2nd period add up in loss to No. 15 Notre Dame

Notre Dame outshot the Badgers 39-14 over the final two periods and 48-25 for the game in winning the opener of a Big Ten series.

Four players either signed with the Badgers on Wednesday for the 2022-23 men's hockey season or plan to do so soon. Other recruits have to wait to see how many more openings there will be after this season.

Milewski on hockey: No. 1 Badgers don't have a scoring problem, until they do

State Journal hockey beat writer Todd D. Milewski looks at the big picture and the small details with the Badgers.

Badgers women's hockey team gets another week atop national rankings

Milewski on hockey: Comparisons don't paint a pretty picture of Badgers in rough start to season

State Journal hockey beat writer Todd D. Milewski looks at the big picture and the small details with the Badgers.

"We've got to keep working on that mindset to respect our opponents but at the same time have a (expletive)-you attitude," Badgers defenseman Tyler Inamoto said.

The Badgers take a five-game winning streak against Michigan State into a Big Ten series in East Lansing.

Notre Dame's Graham Slaggert gets to the puck ahead of UW's Josh Ess after a faceoff during Saturday's game.