GREEN BAY — Even though “The Shawshank Redemption” seems to be on somewhere on cable every time you flip through channels — if people still do that in the age of streaming — it’s been awhile since Randall Cobb has caught the 1994 film.

“A long time ago,” the Green Bay Packers veteran wide receiver said Thursday. “So I don’t know all the references.”

OK, so nevermind the parallels between the story of Tim Robbins’ Andy Dufresne escaping from the corrupt penitentiary, and Morgan Freeman’s Ellis Boyd “Red” Redding reuniting with him in Zihuatanejo — even though Freeman’s iconic line (“I guess I just miss my friend”) sure fits the Cobb-Aaron Rodgers reconnection, especially after Cobb said his teammates drew the same parallel upon his return to the team in late July.

“I can breathe again. I’ve seen the other side, and I’m excited to be back here,” Cobb said then, smiling broadly. “It’s funny, my teammates said, ‘You act like you just got out of prison.’ And I said, ‘Well, you know …’”

Cobb was still wearing that same wide smile Thursday, even though his transition on the field hasn’t been as smooth as it was back into the Packers’ culture. Nearly two months later, the offensive coaching staff is still trying to figure out how to integrate Cobb into the offense. Through two games, Cobb has played just 27 of the Packers’ 122 offensive snaps (22.13%)

“Definitely we want him out there; we want all of them out there,” offensive coordinator Nathaniel Hackett said. “We just want to get everybody out there as much as we can. The more plays we can have the more we can get everybody involved.”

Coach Matt LaFleur said he’s “got to do a better job of trying to get” Cobb more plays while calling him “an important part of our football team” and someone he’d like to get “a little bit more involved.”

As a result of his limited usage, Cobb enters Sunday night’s game against the San Francisco 49ers at Levi’s Stadium in Santa Clara, California, having caught four passes for 58 yards. His biggest reception to date is a 32-yarder against New Orleans in the season-opener — thrown by Rodgers’ heir apparent, Jordan Love, during garbage time.

Cobb isn’t complaining at all. He’s been reunited not only with his BFF QB but also Davante Adams, another of his closest friends, as well as a host of other teammates who remain from 2018, the last season of his previous stint in Green Bay.

“I had no expectations whenever I came in,” said Cobb, who spent the 2019 season with the Dallas Cowboys and the 2020 season with the Houston Texans, who traded him to the Packers for a sixth-round pick. “I’m a person that, I’ve had to earn everything that I’ve ever had in my life. And I don’t think that changes just because I walk into a new building.

“I’ve got a lot of things that I have to prove to a lot of people, and that’s the attitude that I always take. Every person in that locker room, they want to play every single play. But it has to be earned and that’s what I’m trying to do, earn the respect of everyone in this building and get my opportunity whenever it comes.”

There are signs that Cobb’s role is expanding. In Monday night’s win over Detroit, he caught three passes for 26 yards, including one on a free play when Rodgers took advantage of a defensive lapse.

That was on Cobb’s first catch, a 14-yarder on third-and-14 that came after Rodgers caught the Lions with 12 men on the field, picking up a first down. Later on that same drive, he caught back-to-back passes: a 3-yarder on second-and-10 from midfield, followed by a 9-yarder on the ensuing third-and-7 play to pick up another first down.

“It felt like it was right back to the way it used to be, having (that first catch) off a play where we catch ‘em with 12 men on the field,” Cobb said. “That’s right back to backyard football, doing what we do. I feel like I got a pretty good grasp of the offense. The game flow is going to be the game flow. It’s going to go the way it does, and I can’t control that. I’ve got to make sure that I’m prepared and ready whenever my number’s called.”

After the game, Rodgers suggested that Cobb needs to play more than the 12 snaps he got against the Lions while also acknowledging LaFleur’s desire to keep the 31-year-old Cobb healthy for the entire 17-game season. Cobb hasn’t played a full season’s worth of games since playing all 16 games in 2014 and 2015.

“Obviously, we all want to play and play every play. We all want to have 10 catches and 150 yards and three touchdowns every game, but that’s not going to happen,” Cobb said. “We have to understand for us to win ballgames and for us to be in the position we want to be in January going into February, it’s going to take all of us. We have to understand that we all have to play our role and be the best that we can be in those times.

“That’s pretty much been my message to all the guys, and I have to tell myself that, too. We all carry our ego onto that field thinking that we’re the guy, and we have to make sure that we check that and know what’s important — and that’s team success and us winning ballgames.”

Meanwhile, Cobb has settled into being back in the city he called home for eight seasons, with his wife Aiyda and the couple’s two young sons now having joined him after he bunked in with Rodgers for his first 10 days back in Titletown—which was quite the experience itself.

“It was great. We watched the Olympics just about every night, and went through a couple installs of the offense and just trying to get me up to speed,” Cobb recounted. “You all know the way his brain works. Mine doesn’t quite work that way, so I had to be like, ‘OK, this is enough, I’m going to get this from my coaches, OK? Because you’re just going too fast right now.’ …We’ve probably hung out more in this time than in the past three years, so it’s nice to get back and be able to spend some time.

“I just have so much gratitude every single day when I wake up. I’m in an unbelievable position, not only to be able to play the game that I love and get paid to do it, but also to be somewhere where I’m happy — not complacent, but content and happy to go to work every day and enjoy my time, spend it with people that I love to be around.” 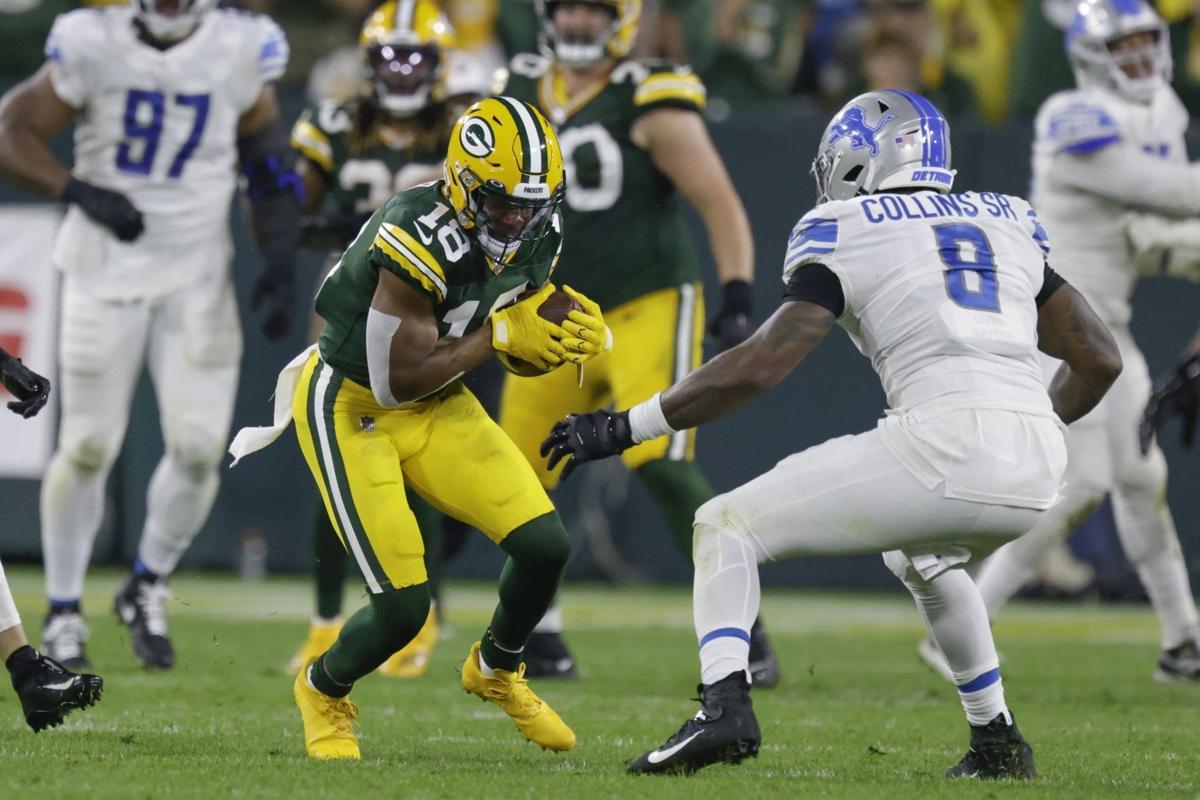 Packers' Randall Cobb looks for a path around Lions' Jamie Collins Sr. during the second half Monday night. 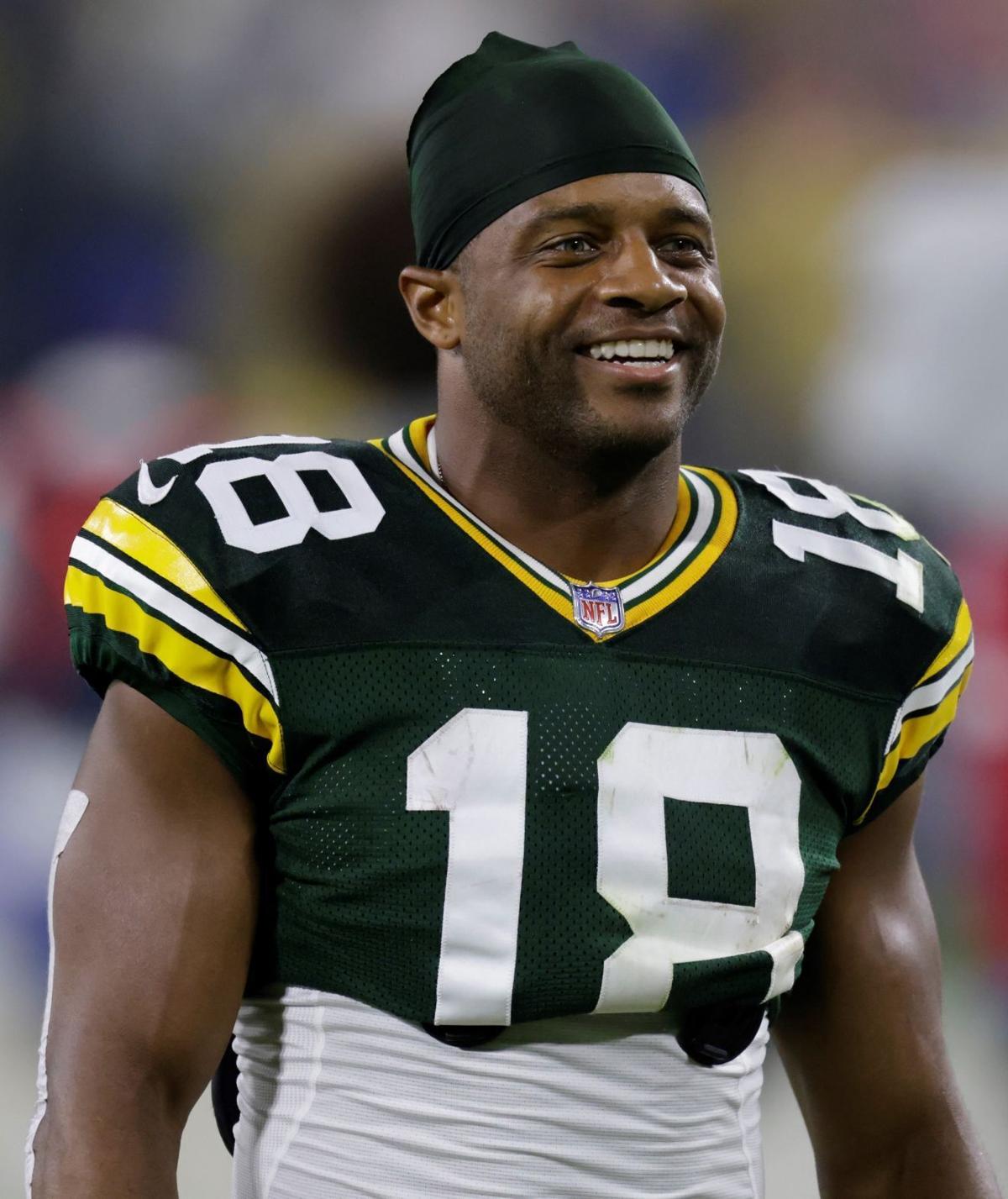