Jim Polzin: How being attentive has helped Aaron Rodgers get inside the minds of young Packers teammates
0 Comments
Share this
{{featured_button_text}}
1 of 2 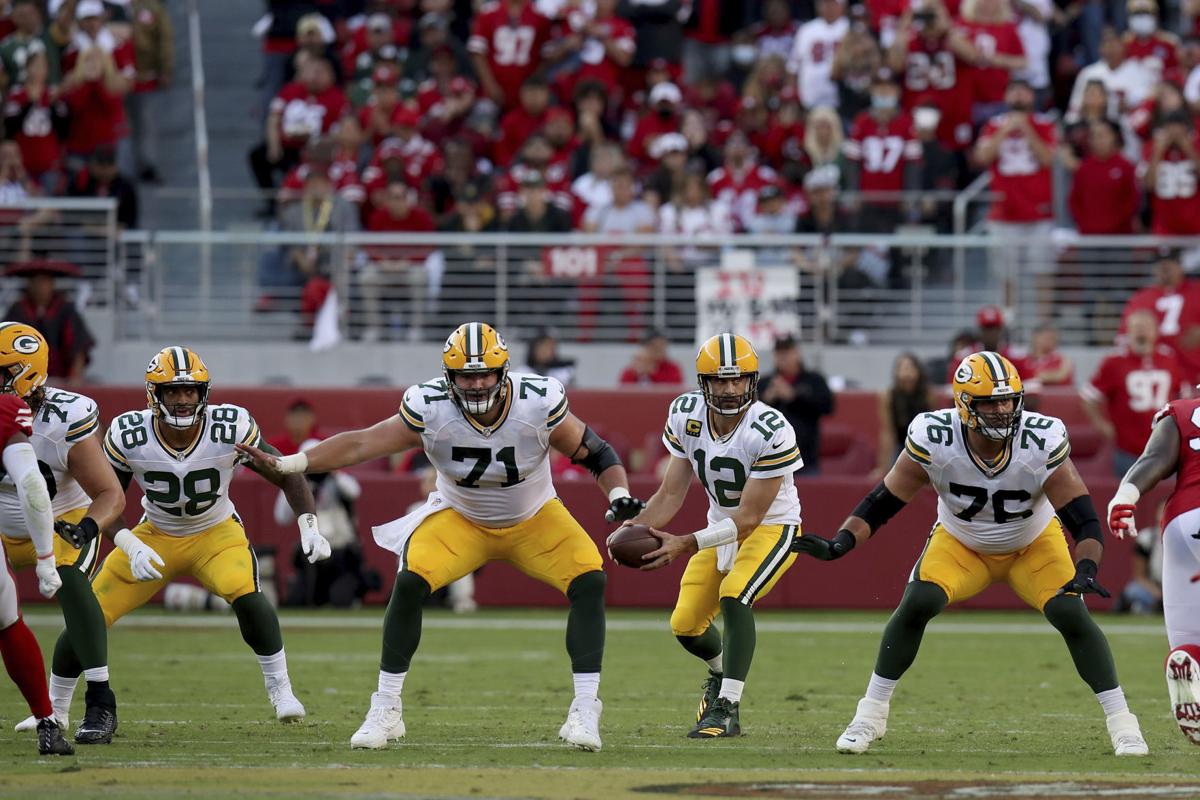 The Packers' offensive line during their 30-28 victory over the San Francisco 49ers on Sunday night included four players with a combined five career starts to that point, a group that included center Josh Myers (71) and left guard Jon Runyan (76). 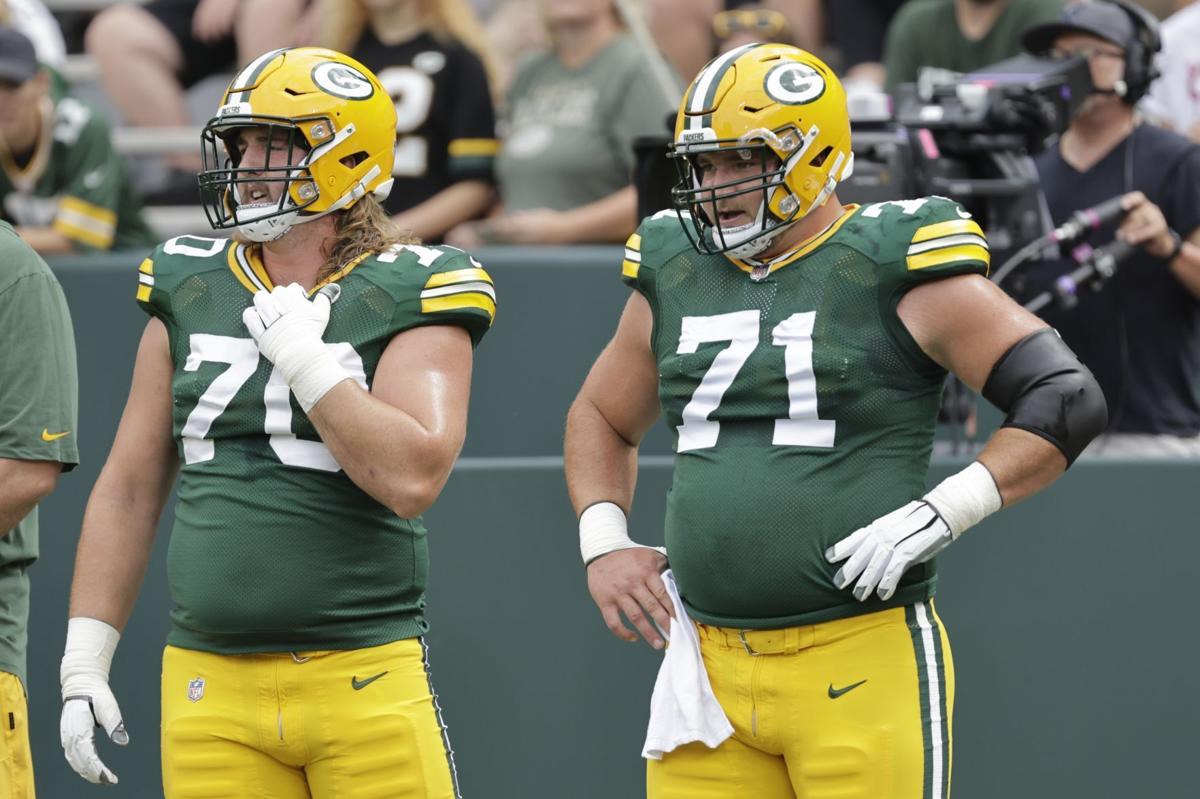 GREEN BAY — When rookie Royce Newman arrived at Lambeau Field one morning, the Green Bay Packers rookie right guard probably had no idea there was someone watching his every move as he got out of the passenger seat.

He found out at the breakfast table when a famous quarterback pulled up a chair and began asking questions.

Who was dropping you off? Why aren’t you driving your own car? What’s the situation at home looking like?

“You have those little entry points,” Aaron Rodgers was saying this week, “and then you start to get them out of their comfort zone.”

Rodgers shared that anecdote in response to a question about how much effort he puts into getting to know young players on the roster. The answer: A lot, because he believes that’s the first step in developing faith in his teammates.

Trust is important to Rodgers and nobody knows that better than Davante Adams. Long before he was a star wide receiver for the Packers, Adams was a young player who needed to prove to Rodgers he could be counted on in big moments.

During walk-throughs on days before a game, Rodgers sometimes would look over to Adams and signal that he wanted him to go in motion. But it was a trap: Either Adams was lined up on the line of scrimmage and would be called for a penalty if he did so, or he wasn’t allowed to go in motion to based on his assignment for that particular play.

“When I started getting to the point where he would wave me over, and I’d sit there staring at him, he’d smile,” Adams said. “It was more so just messing with me to make sure I knew my assignments.”

Open Jim: Frustration boiling over for Badgers fans when it comes to the play of Graham Mertz and the offense

Rodgers is surrounded by a lot of veterans on a roster that didn’t have much turnover after the Packers, for the second consecutive season, went 13-3 in the regular season and advanced to the NFC Championship Game.

But there’s enough young blood to keep Rodgers busy pushing buttons. What we see is him screaming at Myers after a shotgun snap nearly leads to a catastrophe. What we don’t see is the work Rodgers does behind the scenes to show players such as Newman that he’s interested in helping them develop.

“I think the biggest key is to, how do you empower a guy to get comfortable and show his personality as soon as possible?” Rodgers said. “Because when a guy can be comfortable, that’s when you can see them play to their full potential.

“Some guys, it takes a while. It can take multiple years before they really feel comfortable. I think of multiple guys who’ve kind of started slow and it’s taken some time for them to feel they can be themselves.”

The starting offensive line for the Packers last Sunday night vs. the San Francisco 49ers included two rookies making their third career starts: Newman and center Josh Myers. To the left side of Myers was guard Jon Runyan, a second-year player making his second career start. At left tackle, filling in for injured standouts David Bakhtiari and Elgton Jenkins, was Yosh Nijman, a third-year player with zero career starts and a whopping 14 regular-season snaps under his belt entering the night.

Rodgers was skeptical of the decision to start Nijman at first but came around after talking to offensive line coach Adam Stenavich.

“Once he saw that I was pretty convicted about my decision,” Stenavich said, “I think it made him feel better.”

The biggest heroes of the Packers’ come-from-behind 30-28 victory over the 49ers just happened to be three of the longest-tenured players on the roster: Rodgers, who threw for 261 yards and two scores; Adams, who had 132 receiving yards and hauled in two of his 12 receptions on the game-winning drive; and Mason Crosby, who drilled a 51-yard field goal as time expired.

Inside the 37 seconds that may define the Packers’ season

Less glamorous but just as important was the play of that young offensive line that held up against one of the best defensive fronts in the NFL. It took guts on the part of Stenavich and coach Matt LaFleur to go with a group that green in a moment that big, but Nijman and Co. delivered. It also speaks to the depth the Packers have built, a credit to general manager Brian Gutekunst and his staff.

Rodgers called it a “huge” moment for the Packers, who’d opened the season with a blowout loss to the New Orleans Saints and followed that up with a home win over the Detroit Lions that even he noticed didn’t generate much buzz afterward in the locker room.

This postgame scene was different.

“Every year, you’ve got to relearn how to win with this group of guys,” Rodgers said. “A bunch of us who’ve been around and know what it feels like and what it should look like, obviously we have a foundation of that. But every team has to learn how to win, from No. 1 to 69 on the roster. You’ve got to feel how special it is.”

The Packers are on a two-game winning streak that feels like the early stages of a run that could extend another four weeks. They host Pittsburgh on Sunday, followed by road games against Cincinnati and Chicago and a visit from Washington.

Meanwhile, Rodgers will be on the lookout for what he referred to as “ammo” as he tries to get his get inside his young teammates’ minds and find out what makes them tick.

Badgers in the NFL: Check out which former UW stars made NFL rosters

As NFL teams made final cuts to their rosters this week, 23 former University of Wisconsin players are on teams' 53-man rosters.

Get to know all nine players taken by the Green Bay Packers in the 2021 NFL Draft.

The Packers' offensive line during their 30-28 victory over the San Francisco 49ers on Sunday night included four players with a combined five career starts to that point, a group that included center Josh Myers (71) and left guard Jon Runyan (76).