Jim Polzin: It's time for Wisconsin Badgers quarterback Graham Mertz to start delivering on his potential
0 Comments
Share this
{{featured_button_text}}
1 of 2 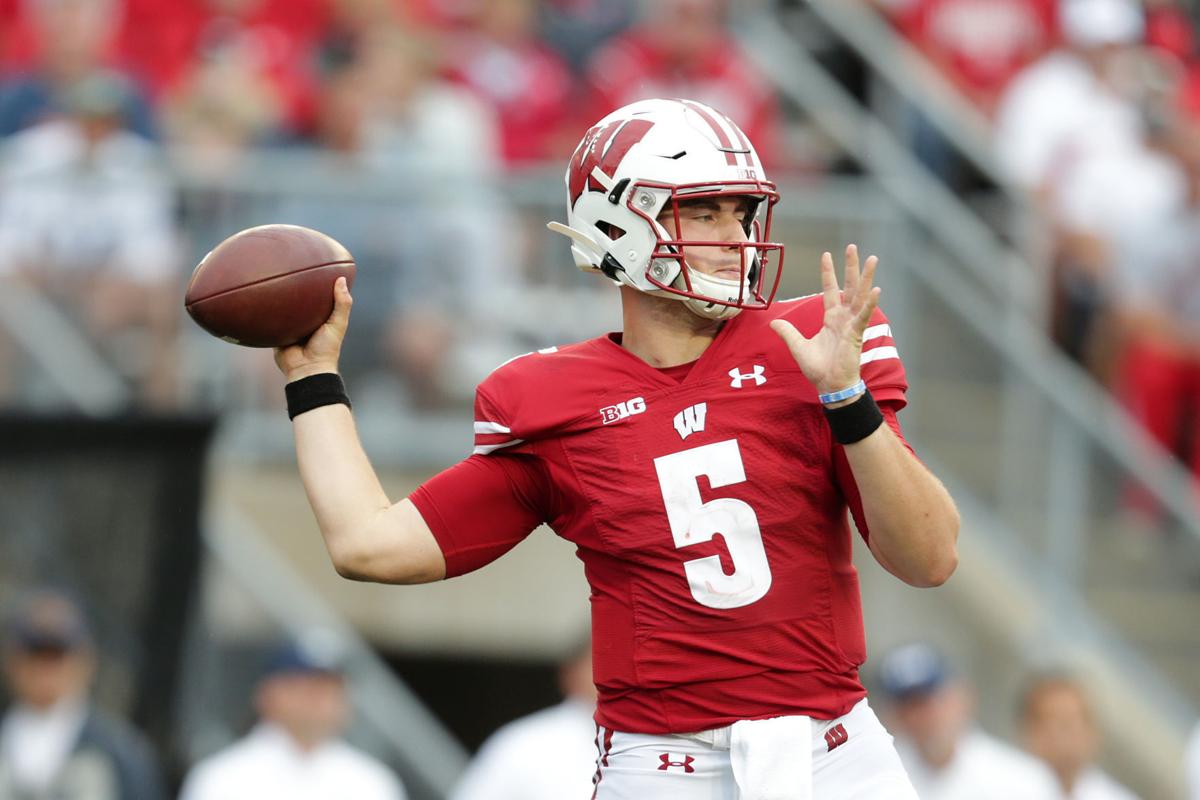 Badgers quarterback Graham Mertz was 22 of 37 for 185 yards with no touchdowns and two interceptions during the No. 12 Badgers' 16-10 loss to No. 19 Penn State on Saturday at Camp Randall Stadium. 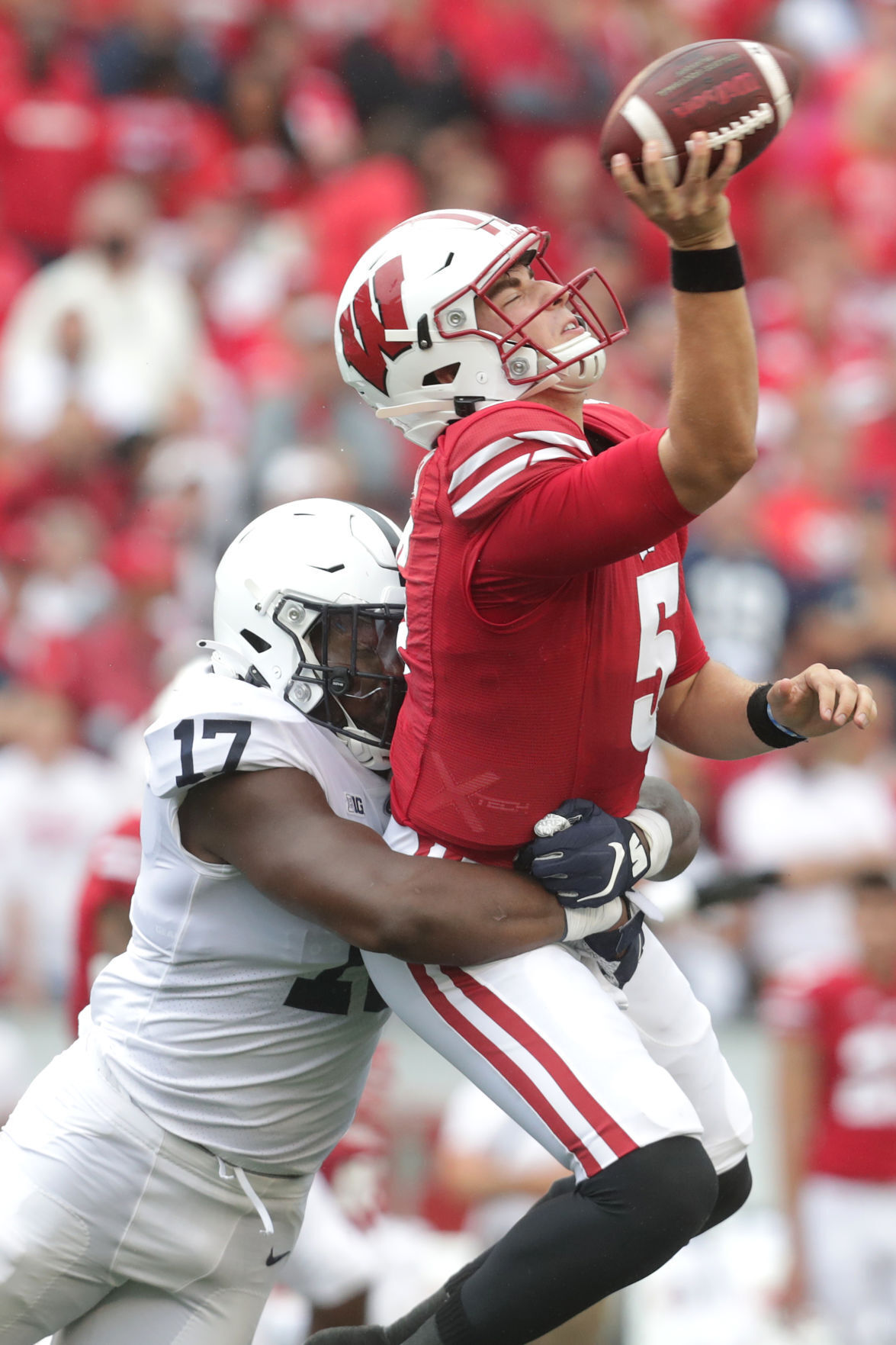 UW quarterback Graham Mertz is tackled by Penn State defensive end Arnold Ebiketie as he throws an incomplete pass during the first half. The sophomore finished 22 of 37 for 185 yards with no touchdowns and two interceptions.

Graham Mertz walked into the McClain Center roughly 45 minutes after his second interception of the game had sealed a season-opening defeat for the University of Wisconsin football team, a scowl plastered on the sophomore quarterback’s face as he made his way to a table surrounded by reporters.

Mertz answered questions for about 7 minutes and was never rude, but his mood never improved. It was unlike anything we’d seen during his first season as a starter, when Mertz always seemed to be Mr. Brightside while making his way through a 2020 campaign filled with adversity.

Not Saturday afternoon, not after his mistake-filled performance was a big reason the No. 12 Badgers opened the season with a 16-10 loss to No. 19 Penn State at Camp Randall Stadium.

Mertz looked angry afterward, though he disagreed with that assessment.

Knowing it is one thing, proving is quite another. What a statement it would have been for UW to open the season with an impressive win over a ranked opponent, for Mertz to put an uneven 2020 behind him and offer proof that all the hype that surrounded him when he arrived in Madison as a blue-chip recruit was deserved.

Instead, it’ll be another three weeks before Mertz gets a chance to redeem himself. A flashy performance next week against Eastern Michigan isn’t going to quiet critics, nor should it. He needs to do it against Notre Dame at Soldier Field in Chicago on Sept 25.

It’s impossible to mention that matchup and not bring up Fighting Irish quarterback Jack Coan, who transferred from UW after last season. While Coan was never spectacular with the Badgers, at least he made solid decisions and generally avoided the type of momentum-killing errors that plagued Mertz in the opener against the Nittany Lions.

Like when Mertz, on UW’s opening series, got flagged for intentional grounding. UW had a promising drive going near midfield after back-to-back nice runs by Chez Mellusi, but Mertz panicked under pressure in the pocket and threw the ball out of bounds, nowhere near a receiver. The result, an 18-yard loss, killed the drive.

Or on UW’s fourth series of the game, when Mertz and Mellusi had a bad exchange that led to a fumble inside the Penn State 10-yard line.

Or in the fourth quarter, when the Badgers answered the go-ahead score by Penn State with an impressive drive of their own. UW reached the 1 after Danny Davis made an excellent catch, but Mertz lost control of the ball as he was about to hand it off to Isaac Guerendo on the ensuing play. Guerendo recovered the fumble for a 6-yard loss and, two plays later, the drive ended when Penn State safety Jaquan Brisker could see Mertz locking in on tight end Jake Ferguson and stepped in front of the pass for an interception.

Mertz had one last chance to redeem himself and be the hero and the drive started well. He completed four consecutive passes — two apiece to Davis and Ferguson — and a Penn State penalty contributed to UW reaching the 25-yard line.

But Mertz had wide receiver Chimere Dike open for what would have been a touchdown and missed him on first down, then inexplicably got flagged for another intentional grounding on the next play. All that was left was a prayer that was intercepted as time expired.

“Obviously, not proud of how it ended,” Mertz said. “There are definitely a lot of things on my plate that I have to clean up, and I will. I’m going to do everything and anything I can to make sure I’m ready to go and this team’s ready to go. There’s a lot of stuff I need to clean up, but I’ll be ready.”

There were valid excuses for Mertz’s struggles last season: An abnormal offseason due to the pandemic. His lack of experience. A COVID-19 outbreak that included Mertz, UW coach Paul Chryst and other offensive assistants testing positive and missing time. Injuries to Davis and another veteran receiver, Kendric Pryor. No consistent running game to make life easier on him.

But Mertz had everything he needed to succeed on Saturday. He’d had a full offseason to prepare and was surrounded by a group of healthy, veteran receivers. Mellusi rushed for 121 yards and Guerendo added another 56 on the ground.

“We had a lot of guys across the board do enough to give us a chance,” Chryst said. “But we’ve got to find ways to finish.”

Finishing was an issue for the Badgers on Saturday — they got nothing on three of their four trips inside the red zone — and it’s become the sticking point for the program as a whole. Chryst is now a combined 0-7 against Ohio State and Penn State after falling to the Nittany Lions for a third time.

This may be the point where you’re longing for Coan or begging Chryst to replace Mertz with Chase Wolf. The first ship has sailed, so there’s no point in rehashing what might have been. And there’s no evidence to support the notion this offense would be in any better shape with Wolf leading it.

What the Badgers need is for Mertz to be better, and in a hurry. An average performance likely would have been enough to get the job done Saturday.

If Mertz thinks he’s hungry, he should sit at a dinner table with UW fans. They’re starving right now for a quarterback to reach his potential.

Open Jim: Should Paul Chryst consider hiring an offensive coordinator from outside the Wisconsin Badgers family?

Jim Polzin: The Badgers offense lacks imagination and execution. That needs to change, starting this week

UW has lost six consecutive games to ranked opponents dating to late in the 2019 season. The Badgers have scored 10 or fewer points the last four of those games. What gives? And what needs to change?

Watch now: Graham Mertz discusses how he has to learn from his performance

Wisconsin quarterback talks about what he needs to do to move on and improve his play after No. 12 Wisconsin fell to No. 19 Penn State in thei…

Columnist Jim Polzin asked Badgers fans on Twitter what they thought of No. 12 Wisconsin's 16-10 loss to No. 19 Penn State in their season ope…

Grading the Badgers: Offense, coaching get failing grades in loss to Penn State

This was a winnable game against a ranked team and the Badgers were left beating themselves up afterward because, well, they beat themselves in a lot of ways.

Analysis: How Penn State broke through for big plays to win after Badgers defense dominated first half

Four throws accounted for more than half of the No. 19 Nittany Lions' offense in Saturday's win over No. 12 Wisconsin.

A recap of the top plays, top performers and key takeaways from Wisconsin's 16-10 loss to Penn State.

Badgers quarterback Graham Mertz was 22 of 37 for 185 yards with no touchdowns and two interceptions during the No. 12 Badgers' 16-10 loss to No. 19 Penn State on Saturday at Camp Randall Stadium.

UW quarterback Graham Mertz is tackled by Penn State defensive end Arnold Ebiketie as he throws an incomplete pass during the first half. The sophomore finished 22 of 37 for 185 yards with no touchdowns and two interceptions.