GREEN BAY — Adrian Amos has a theory about the cornerback position.

And no, the Green Bay Packers veteran safety’s take is not some sort of snobbery about his own position in the secondary being more intellectually challenging. But it might be an important viewpoint given what the Packers defense will be dealing with in Sunday’s game at Soldier Field against Amos’ former team, the Chicago Bears.

“I mean, corner, it might be one of the easier positions as far as the X’s and O’s parts of it,” Amos explained. “Because either me or (fellow starting safety Darnell) Savage is on that side with them throughout the game anyway, so we can get them, relay the calls. Even if they didn’t know the call, we can tell them what their job is on that play.”

It very well may come to that on Sunday, with the Packers set to play without second-team All-Pro cornerback Jaire Alexander (injured reserve with a shoulder injury suffered Oct. 3 against Pittsburgh) and No. 2 cornerback Kevin King (ruled out on Friday because of a shoulder injury he suffered in last Sunday’s win at Cincinnati).

King, who played through the injury against the Bengals until making a sideline tackle during the fourth quarter, has a history of shoulder injuries dating to his college career at the University of Washington, so it wasn’t a surprise he wasn’t cleared by the medical staff.

“We’ve got a lot of different guys we can put out there,” Packers coach Matt LaFleur said following Friday’s practice. “We’ve got plenty of options.”

Without Alexander and King, rookie first-round pick Eric Stokes will be the team’s No. 1 corner, having started two games while King was sidelined by lingering effects of an initially undiagnosed concussion and last week’s game with Alexander out and King back in the lineup.

Opposite Stokes, the Packers are expected to start Isaac Yiadom, whom they acquired in a trade with the New York Giants in August in exchange for 2018 second-round pick Josh Jackson in a swap of disappointing corners. Chandon Sullivan will likely remain the third cornerback, playing in the slot.

After that, the Packers are thin with rookie fifth-round pick Shemar Jean-Charles and recent additions Rasul Douglas and Quinton Dunbar the next men up. Douglas was signed last week off the Arizona Cardinals’ practice squad, while Dunbar was added to the practice squad earlier in the week and could be a game-day call-up on Sunday. Kabion Ento, who spent all of 2019 on the practice squad as a rookie and all of last season on injured reserve, is on the practice squad as well, though he has never played in an NFL regular-season game.

“It’s definitely a challenge, but anytime you go into a game, you have a game plan, so your playbook is pared down,” LaFleur replied when asked how quickly players with limited exposure to the defense can contribute. “The most important thing is owning your responsibility, communication, and making sure those guys who have experience in our system help you out a little bit.”

The good news for the Packers? The Bears are last in the NFL in passing, having managed a measly 566 passing yards through five games (113.2 yards per game), and rookie quarterback Justin Fields hasn’t completed more than 12 passes in a game. But Bears offensive coordinator Bill Lazor knows his offense needs to be more balanced and Fields needs more throwing opportunities.

“What you don’t want is a cautious quarterback. You want a guy who’s aggressive, but who’s smart,” Lazor said. “The balance of that is the key to growth. And I think (Fields) has done a good job with that. He’s taking some throws down the field. We didn’t get nearly as many this last game, but he’s taken some.

“I think he’s right on track. You have to take some shots to get some big plays. We came out of the game with the win, we’re all happy. At the same time, a lot of us, myself included, look back and say, ‘OK, what could I have done to get a little more explosion out of the game?’ That’s the balance.”

Yiadom, who entered the league with the Denver Broncos as a third-round pick out of Boston College in the 2018 NFL draft, started 10 games for the Giants last season, had 46 tackles, five pass break-ups, a half-sack and one forced fumble.

“You’ve always got to be ready,” said Yiadom, who has played 50 defensive snaps (15.8%) through five games but has been a core special teams player (97 snaps) all season. “When you’re on special teams, whenever your name and number is called, that’s why you’re on the 53-man roster. You just have to be ready. Not a big surprise. Every game, I prepare like I’m a starter and going like I’m going to start. Whenever my name is called, I won’t miss a beat.”

Douglas, an 11-game starter for Carolina a year ago, spent last week getting up to speed with the playbook but did not dress for the game Sunday, giving him more time in the system than Dunbar.

“He’s doing a nice job and I know he’s ready to roll,” LaFleur said of Douglas. “There’s a good chance you’ll see him this weekend.”

That said, Dunbar is an intriguing option, having played in defensive coordinator Joe Barry’s system with Washington in 2015 and 2016. He’s also started more games (31) than Yiadom (19) and Douglas (29) have in their careers.

Barry seems to have a soft spot for Dunbar, as well. He related the story this week of how Dunbar, a wide receiver in college at Florida, came into Washington’s training camp as an undrafted free agent and longshot to make the roster — before the coaches moved him to cornerback and he unexpectedly wowed them on defense.

“To be honest with you, he was just a camp body,” Barry said. “We’re going through training camp and that year we had a joint practice against the Houston Texans. We had three days of practice against them. It was the third day, we had a couple injuries and I want to say we only had three or four corners to go into practice. So, we’re like, ‘What are we going to do? We got three corners.’ I’ll never forget it. ‘Dunny’ was wearing No. 17. That was his jersey number. I didn’t even know his name.

“In the staff meeting, we’re like, ‘What about that Dunbar guy? Could we just throw him in to get through practice?’ I’m like, ‘No. 17? Are you kidding me?’ We’re like, ‘We’ve got to do something.’ So, that is how Quinton Dunbar became an NFL corner.”

Left guard-turned-left tackle Elgton Jenkins (ankle) practiced for the third straight day but was still listed as questionable on the official injury report and LaFleur said he’ll be given the chance to show on Sunday he’s good to go. “We worked a lot of combinations,” LaFleur said of the line plan. “I’ll let you know 90 minutes before the game on Sunday.” … If Jenkins is a go, the Packers would have their preferred (albeit David Bakhtiari-less) line together for the first time because center Josh Myers (finger) was cleared for action and removed from the report after missing last week’s game with the injury, which dates to the Sept. 12 opener against New Orleans …The Packers listed backup offensive tackle Dennis Kelly (back) as doubtful and wide receiver Malik Taylor was placed on the reserve/COVID-19 list. … In Chicago, the Bears listed 10 players as questionable including defensive tackle Akiem Hicks (groin), safety Eddie Jackson (knee), linebacker Khalil Mack (foot) and wide receiver Allen Robinson (ankle), though all four of those players took part in Friday’s practice in some capacity.

Against the Rams' fearsome pass rush, Yosh Nijman will need to play even better than he did during a three-game stint earlier in the season.

The Rams came from Hollywood to Titletown as the alleged epitome of a team going “all-in” but Green Bay took care of business and sent them packing with a 36-28 victory at Lambeau Field.

The Packers entered last Sunday’s loss to Minnesota ranked third in the NFL in both fewest yards per game allowed and fewest points allowed. They exited that 34-31 loss seventh in yards (318.8 per game) and fifth in scoring (19.5 points per game).

“Yeah, if there’s definitely a plus, it is for Jordan’s benefit in terms of him getting the reps and going out there and making sure that he gets a little bit better each and every day,” coach Matt LaFleur said.

Jim Polzin: Packers positioned for regular-season success after grinding out a victory over the Rams

Matt LaFleur’s team all but secured the North division while putting itself in great shape in the race for a No. 1 seed in the NFC with an effort that, while far from perfect, was more than enough to send them into their off week on a happy note.

The NFL Network reported Monday that Aaron Rodgers has decided against having surgery, at least for now, although a re-injury or deterioration could lead Rodgers and the medical staff to change course.

Columnist Jim Polzin grades the Green Bay Packers' performance in their 36-28 victory over the Los Angeles Rams at Lambeau Field.

Vacation, all they ever wanted? Not yet — as Packers coaches have self-scouting to do, first

After a 12-week grind resulted in a 9-3 start, head coach Matt LaFleur and his staff will be at the team’s Lambeau Field headquarters during the bye week breaking down the team they know best: Their own.

Matt Stafford threw a pick-6 and had a fumble that led to a Green Bay touchdown Sunday as the Rams fell 36-28 to the Packers for their third consecutive loss. 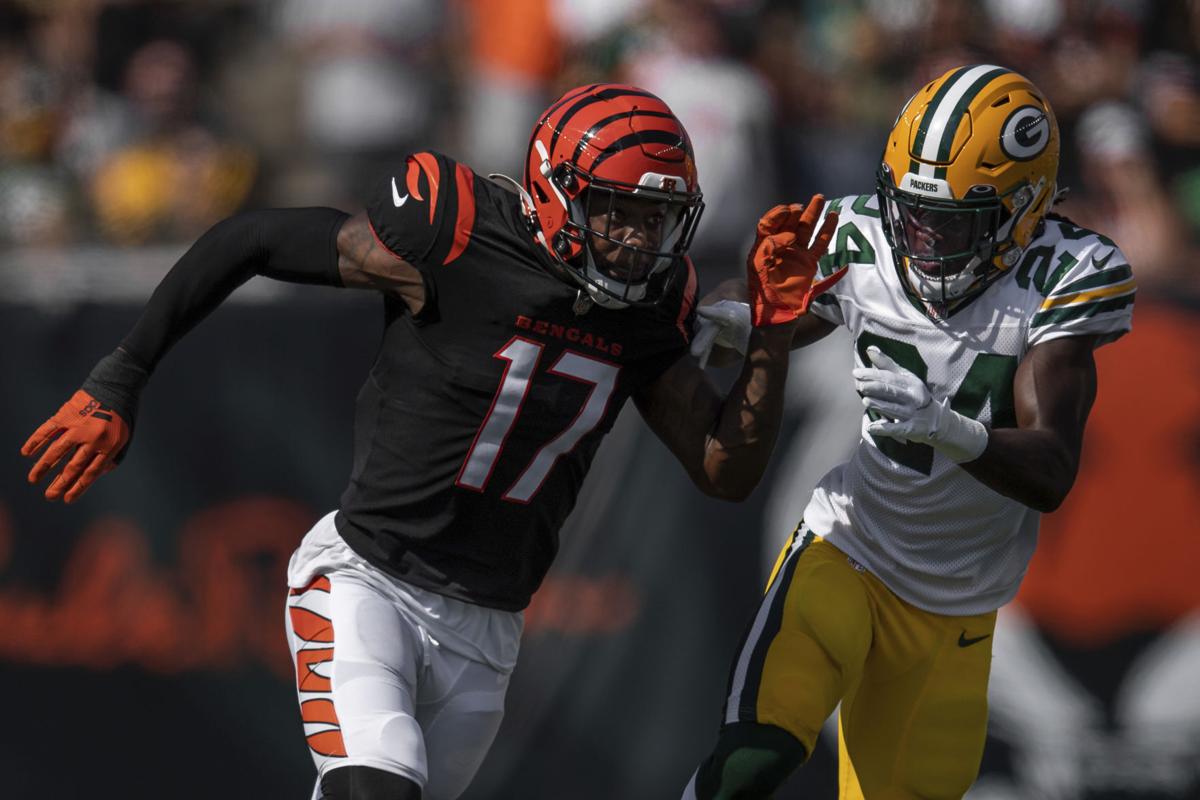 Packers' Isaac Yiadom and Bengals' Stanley Morgan battle on punt coverage Sunday. Yiadom is expected to start at cornerback against the Bears. 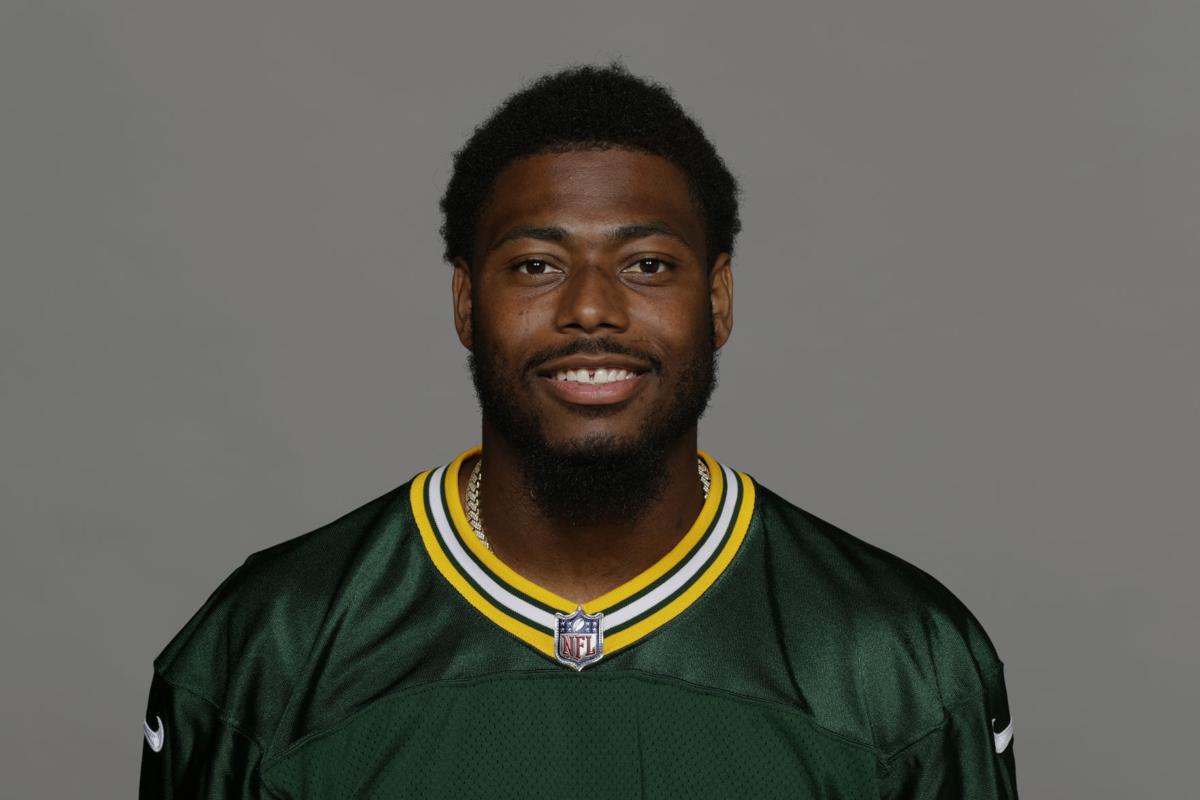