BASEBALL: Defense was strong, but low offensive production too much in Waupun's 2-1 loss to Fond du Lac
0 comments
Share this
Return to homepage × 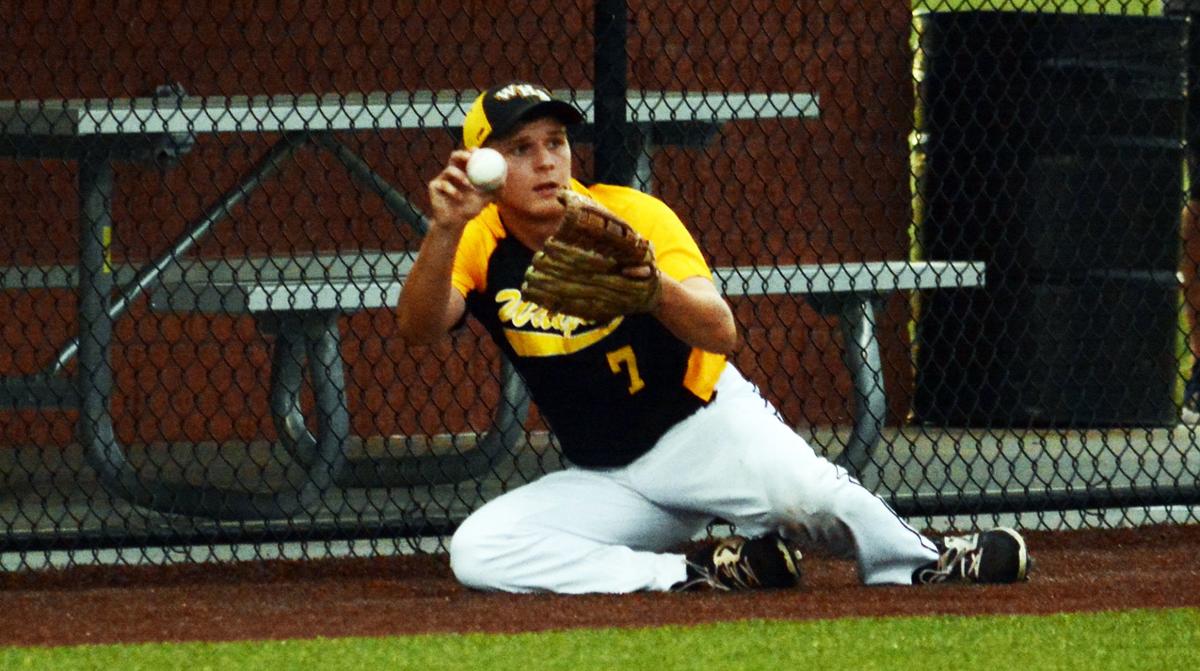 Waupun's Cole Hicken shows the umpire he caught a pop up in foul territory to end the fifth inning of Monday's game against Fond du Lac. 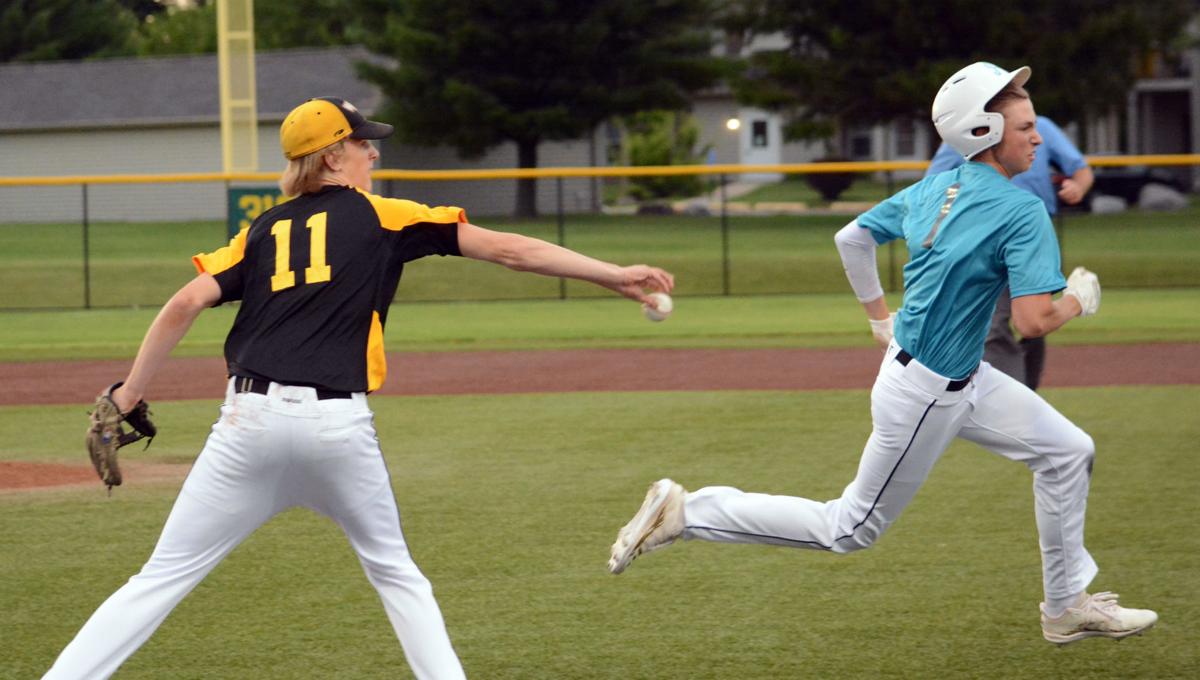 However, the Warriors couldn’t get their bats going to do any damage while the Cardinals did just enough to get the 2-1 victory at Gus Thompson field in Waupun Monday night.

After having the high school season and American Legion season cancelled due to the COVID-19 pandemic this season, the Warriors’ bats were seemingly affected by not playing much this summer.

“It hurts the hitting,” said Waupun coach Bob Spanbauer, who was taking over head coaching duties for Derrick Standke who has to miss the entire week due to personal reasons. “The pitching will be ahead of the batting. We’ll work on it. We tried to pull too many balls, again, tonight. That’s usual for us. We’ll get better. We’ll come out and throw some (batting practice) tomorrow. We’ll work on the outside part of the plate a little bit and for them to go to the right side a little bit more.”

The Warriors were outhit 5-2 by the Cardinals, who were led by leadoff hitter Julian Murillo. Murillo went 2-for-3 at the plate and kicked off the game with a chopper up the middle. Two outs later, Fletcher Haus had an RBI-single to give the Cardinals a 1-0 lead.

The Warriors didn’t take long to catch up in the bottom frame. After Jarrett Buchholz led off with a single, he was out at second from a fielder’s choice by his cousin, Baron Buchholz. Baron Buchholz actually advanced to second when the throw to first got past the first baseman. Two pitches into Noah Garritson’s at bat, Baron Buchholz advanced to third on a wild pitch, and headed home later in the at bat when Garriton grounded out to second base to tie the game at 1.

The Cardinals took the lead in the third inning after Murillo and Justin Schnell led off the inning with back-to-back singles. With runners on the corners, Jake Cedar’s sacrifice flyball to right brought in Murillo for a 2-1 lead.

Even though Waupun pitcher Carson Bresser gave up the two runs, Spanbauer liked the way the incoming senior performed on the mound. He pitched a complete game with three strikeouts and a pair of walks. However, he only had 80 pitches with 47 of them thrown for strikes, and forced the Cardinals into 11 groundouts and five flyouts.

“He did a very good job out there,” Spanbauer said. “He had 80 pitches – he had a lot of off speed stuff and kept them off balance. Keegs (Keegan Hartgerink) had learned a lot these last two years to help Carson a little bit. It works nice. He did a good job and got ahead of the count for the most part. He threw the pitch he wants and when he got behind, he’s not afraid to throw a curveball for strikes. He kept the ball down. When he got hurt a few times, the ball was up a little bit, but for the most part he kept the ball down.”

Three of the groundouts the Cardinals had were directed back at Bresser, who nearly took one of them to the chin in the early part of the game, but kept composed enough to block it with his glove, pick it up and toss it to Garritson at first base.

Bresser also got Fond du Lac’s Logan Wiese to hit into a 6-4-3 double play in the sixth inning. And in the seventh, he got both Noah Harmsen and David Mueller to ground out to Brayden Sanders at shortstop. Then River Reifsnider grounded out to Cole Hicken at third.

“That was one of the better defensive games I think we’ve played in a while,” Spanbauer said. “Well, we haven’t played in a while, but we played really well. Sanders had some hard hit balls up the middle. They hit the ball hard. Hicken had a nice play. In that last inning, they had a couple short choppers up the middle at Sanders and at Hicken, and they both made nice running plays. Our defense was great on the infield. I’m very happy with that.”

Hicken even made a spectacular diving catch in foul territory to end the fifth inning.

“He said, ‘I don’t think I was going to get there.’ I’ll tell you what, he did a nice job,” said Spanbauer, who also mentioned the coaching staff would be comfortable putting Hicken behind the plate, at second or at shortstop because they trust him.

“He likes that and he does a good job at it,” Spanbauer said. “Where ever we’re going to put him, he’s going to do a fine job.”

However, with runners on second and third with one out in the fifth, he chipped a grounder that went over the first baseman’s head, but second baseman Dawson Wyrobeck made a nice grab for the 4-3 out to keep the 2-1 lead intact.

“That saved the run right there for them,” Spanbauer said. “That was some good defense there. It happens. We didn’t hit the ball well. Two hits – we’re not going to score a lot.”

Even with the lack of offensive production, Spanbauer was still optimistic for the Warriors’ bats after the game.

“I think we hit some balls hard too,” he said. “Baron hit a couple hard shots right at them. Jarrett had the one hard hit there (in the first). We hit some balls hard, so it wasn’t like it was a total loss on the offensive end. We just didn’t score, but we hit the ball hard for the most part.”

The Warriors have three more chances this weeks to get on Standke’s good side, though. Up next for the Warriors is at Laconia tonight before traveling to Brownville on Wednesday. Waupun will then host Watertown on Thursday.

“We let him down a little bit tonight, but we’ll be alright,” Spanbauer said.

Waupun's Cole Hicken shows the umpire he caught a pop up in foul territory to end the fifth inning of Monday's game against Fond du Lac.