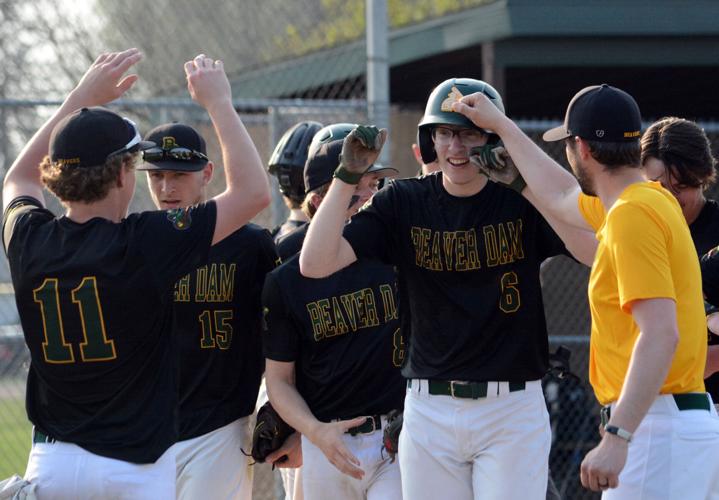 Beaver Dam's Daelen Johnson hits a solo home run to cut the deficit to 5-4 in the third inning of Thursday's Badger Conference crossover game against Portage. 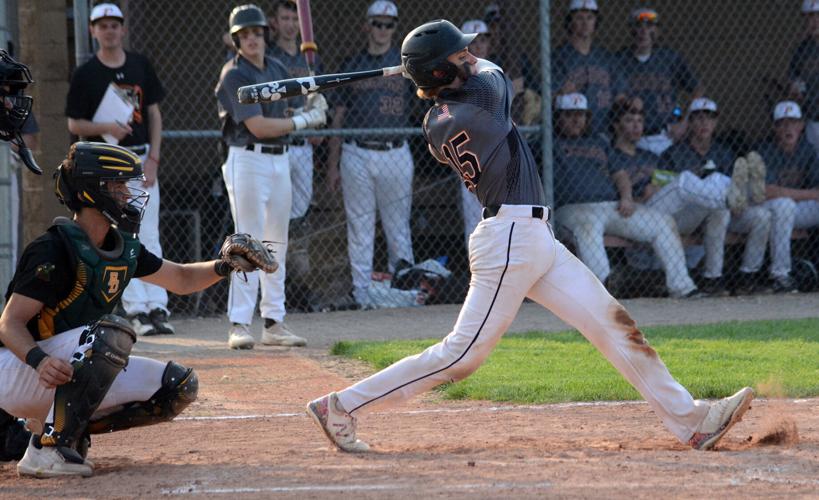 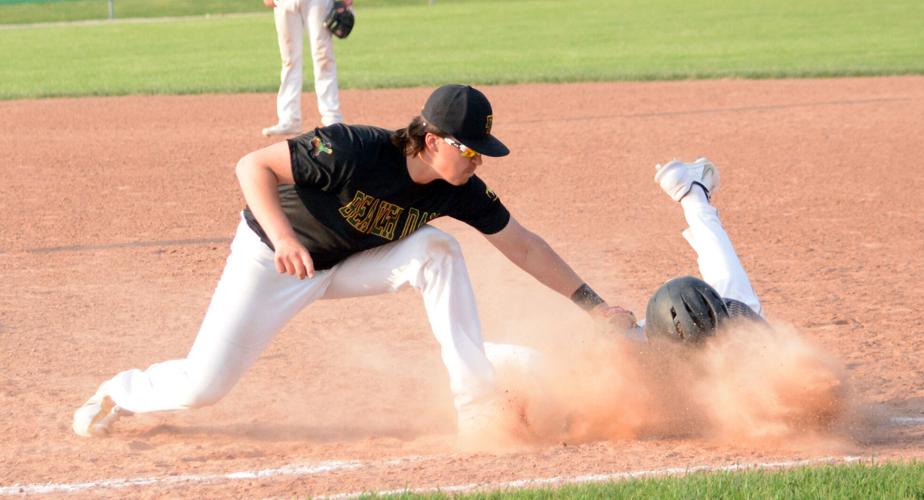 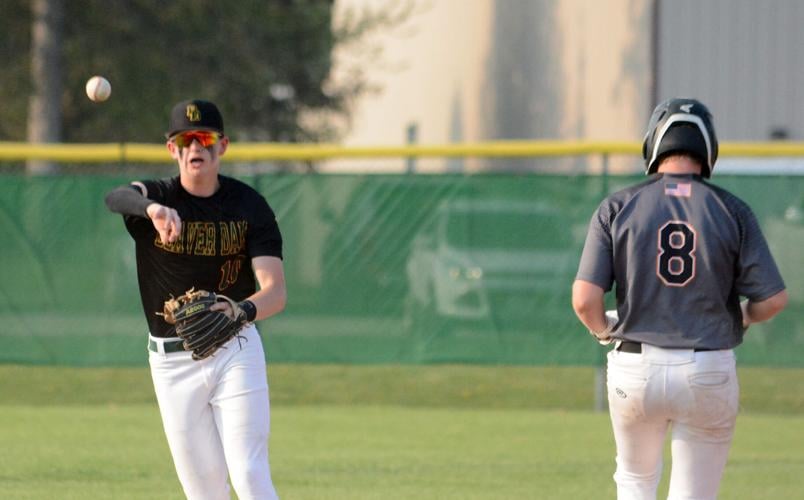 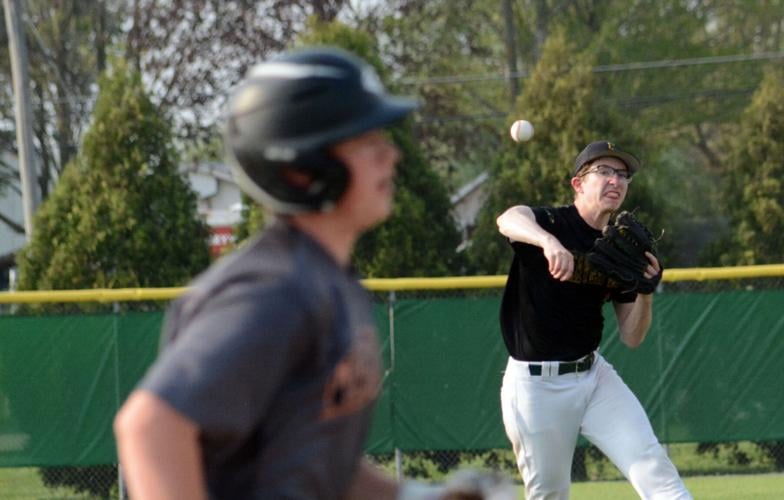 BEAVER DAM — The old adage of “it’s not how you start, it’s how you finish” proved true for the Beaver Dam high school baseball team.

The Golden Beavers dug a five-run deficit in the second inning, but they regained their composure — with their pitching and batting improving — and rallied for a 7-5, comeback win in Thursday’s Badger Conference crossover game against Portage Thursday night at Beaver Dam High School.

“We’re pretty resilient and we always keep our head in the game,” Beaver Dam’s Daelen Johnson said. “No matter how much we get down by, there’s always someone there to bring us back up.”

Beaver Dam coach Nate Wilke said he wasn’t too happy with the way his Golden Beavers started the game.

The Warriors started off by frustrating Beaver Dam starting pitcher Eli Bryant by loading the bases in both the first and second innings. However, with the bases loaded in the first, Bryant got back-to-back popups and struck out Portage’s Andrew Kopfhamer to end the side.

Bryant wasn’t so lucky in the second as Portage got the bases loaded again. He hit Haakon Johnson and walked Cooper Roberts that brought in runs. Then Caleb Drew hit a bases-clearing triple to left to put the Warriors up 5-0.

“The thing with Eli is he’s a freshman,” Wilke said. “We get upset, but he’s a 14 or 15 year old kid. We don’t treat him like a freshman, but at the end you’ve got to remember. He got behind in counts and that hurt. He left the ball up on some of those guys and some of them can hit. He got out of some jams, it could’ve been a lot worse than that 5.”

Portage coach Mike Hemming was pleased to see his team’s offense come alive at that point.

“If we would’ve only come away with the two runs, I think that would’ve been a travesty type deal,” he said. “We had a chance to really burry them and to get that was huge. That was nice hit by Caleb.”

All season long Portage hasn’t been able to finish out games and Thursday’s game was no different.

“We still can’t put a complete game together,” Hemming said. “We had a couple of shutdown innings and we had one inning where we made a big play, but for whatever reason, we’re just not focused enough to finish the deal.”

After the triple is when Bryant was relieved by Boston Damon. Bryant went 1⅔ innings with one strikeout while giving up five earned runs off three hits and four walks.

Beaver Dam responded in the bottom of the second, though.

“It gave us a little bit of life,” Wilke said of Scharfenberg’s hit. “Ben has been hitting the ball great, lately. At the beginning of the year he wasn’t hitting so much and all of a sudden he’s been on a tear. He’s confident at the plate.”

Johnson’s solo homer to the trees out in center made it 5-4 with two outs in the third. Then his single to center in the bottom of the fifth tied the game at 5 with one out. A couple batters later, Tisdale’s single to center brought in Johnson to give Beaver Dam the 6-5 lead.

“It was good to see because it got the confidence going with the other kids,” Wilke said. “Every run was big in that game because we kept chipping away.”

With one out and runners on second and third, Beaver Dam’s Logan Thomas reached on an error, which allowed a run to score, making it a 7-5 lead for the Golden Beavers.

Portage and Beaver Dam both had eight hits apiece, but the Warriors also had four errors compared to Beaver Dam’s two.

“Plain and simple, we’re beating ourselves,” Hemming said. “Offensively, we had eight hits and defensively, it’s been a grind. We’re waiting for some people to figure it out.”

“He’s a young kid, too,” Wilke said. “He’s only a sophomore and he pitched really well this weekend against Appleton East. With us playing tomorrow and Tisdale going against Monona Grove. We needed somebody to step up.

“We put the ball in the hands of a freshman and a sophomore and they did enough to get the job done.”

The Golden Beavers finished a comeback with strong pitching and even better batting against the Warriors Thursday night.

The T-Birds dug out of a horrid start to upend league leader Mt. Horeb just days after losing to the same Vikings.

Despite the start of regionals just under a week away, the Chiefs and Hornets meeting for the league crown had a major playoff feel to it Thursday night.

Beaver Dam's Daelen Johnson hits a solo home run to cut the deficit to 5-4 in the third inning of Thursday's Badger Conference crossover game against Portage.