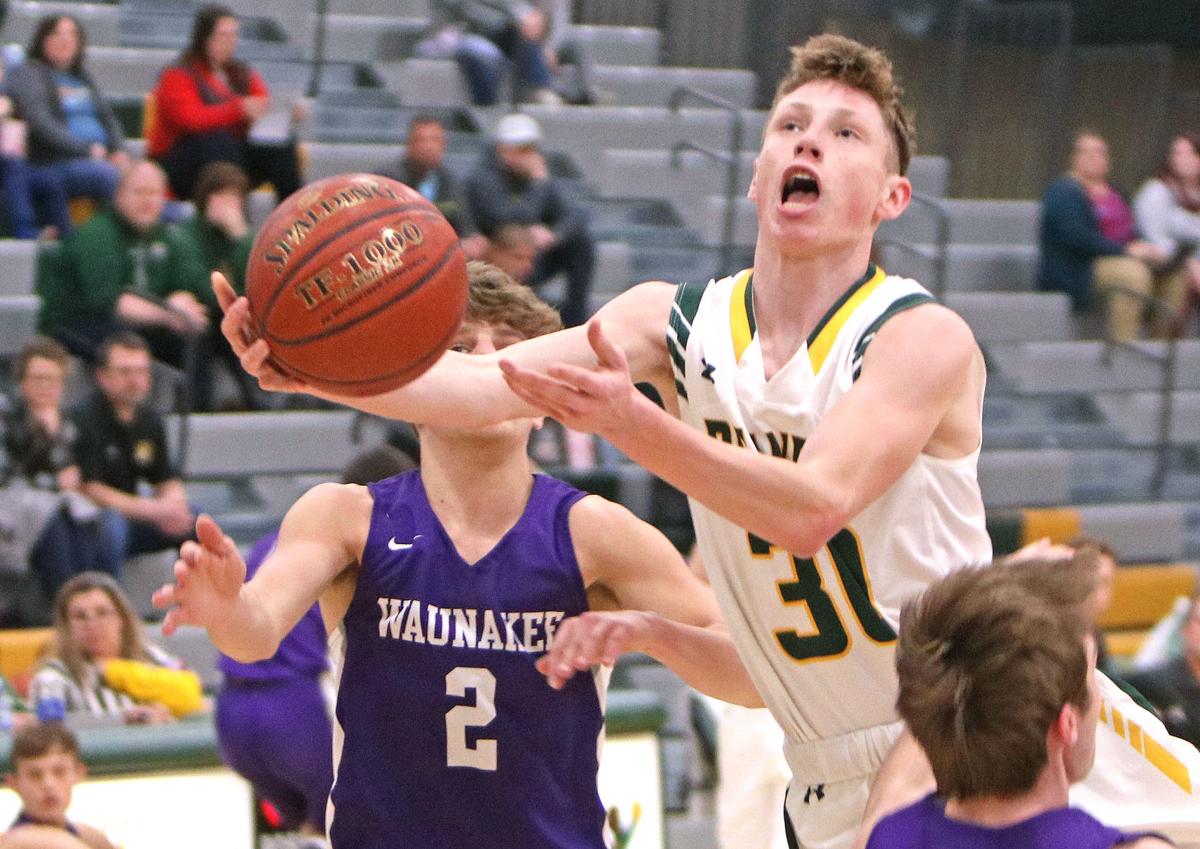 Beaver Dam's Nate Abel was selected to the All-Badger North first team after averaging 21 points a game. He was also honorable mention in Division 2 by the Wisconsin Basketball Coaches Association. 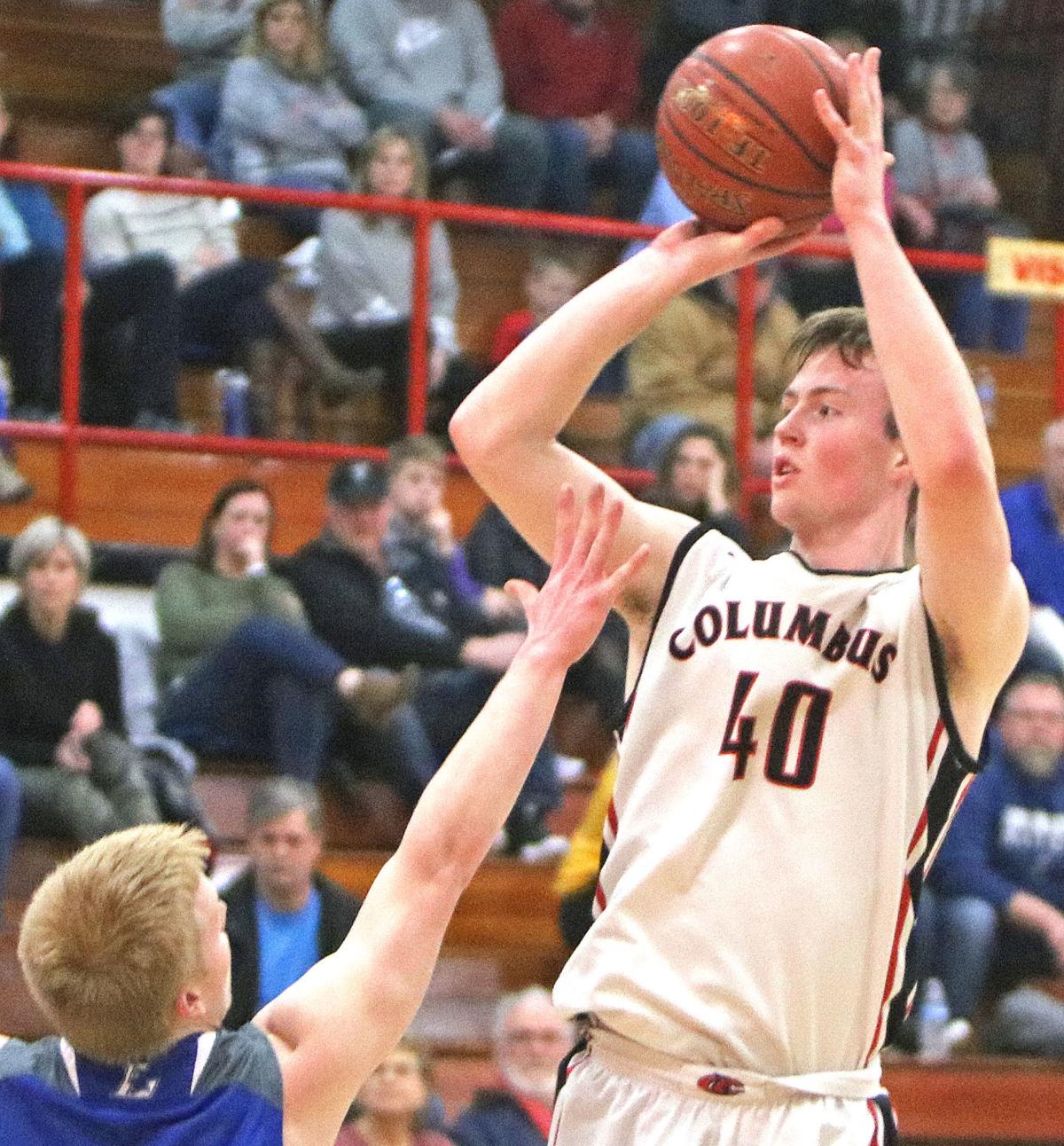 Columbus senior Ben Emler led the Cardinals with 20.1 points a game and was named Player of the Year in the Capitol North. 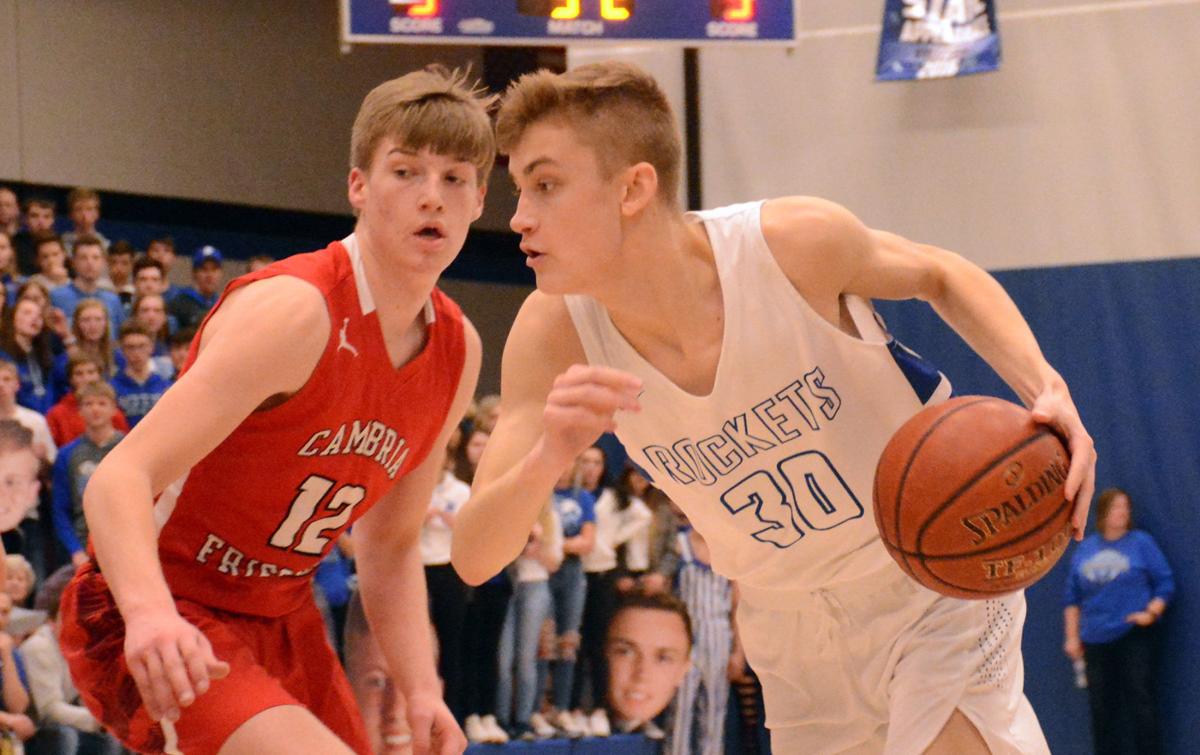 Randolph's Peyton Moldenhauer (right) drives to the basket during the Rockets' game against Cambria-Friesland on March 7 in the Division 5 regional finals. 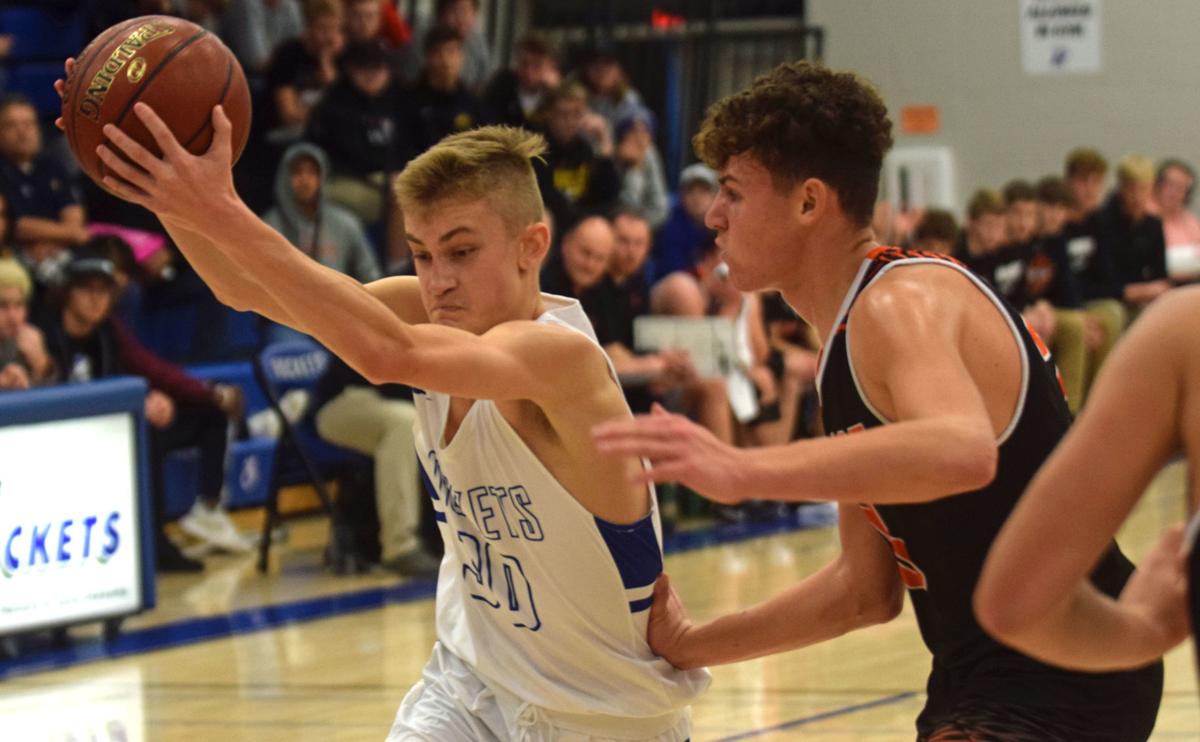 Randolph senior Peyton Moldenhauer (left) drives to the basket as Portage's Matthew Miles defends during the season-opener on Nov. 30.

There’s a glaring similarity between three of the best high school boys basketball players in the area.

Abel has a basketball IQ equivalent to that of Albert Einstein in theoretical physics. The 6-foot-5 Emler can shoot the lights out against anyone. And Moldenhauer’s heart and determination are second to none.

All of those traits mattered, but what was most important was that above all else all three did what was needed for their teams to succeed.

And for those tangible as well intangible things — for excelling in ways measurable and immeasurable — they have been chosen as the Daily Citizen area boys co-Players of the Year.

“Go out every night and play with everything you have and leave it all out on the line,” Emler said. “It was to get the 'W' first and do whatever you can to win. If it’s scoring 30 points, then score 30 points. If it’s scoring five points and grabbing 15 rebounds and dishing out assists, then do that. It was doing whatever you can and putting forth all your effort on a nightly basis.”

Emler, who will be continuing his career at UW-Platteville next season, said it was an honor to share the recognition with players he’s known most of his life.

Emler and Moldenhauer have been friends since they were in sixth grade when they started playing AAU basketball in Randolph together.

“Ben is the type of guy that gets better every year,” said Moldenhauer, who recently committed to Lakeland University in Sheboygan. “It wasn’t just baby steps. Ben got crazy better every year.”

While Emler was in sixth grade at St. Jerome School in Columbus, and Abel was a year behind at St. Katharine Drexel School in Beaver Dam, they played each other through the Catholic basketball league about four times.

Abel said Emler usually dominated because of his size.

Moldenhauer and Abel knew one another from playing Little League baseball in Beaver Dam, and Abel watched his older brother Cole play with Moldenhauer in AAU basketball in Randolph a couple times.

“He’s a great guy. He’s a great ball player,” Moldenhauer said of Nate. “He’s got another year yet, and he’s got a lot to prove. Beaver Dam is a young team and it’ll be great to hear about them as well as all the other area teams.”

The upbringing of all three players showed this past season.

Moldenhauer's team had the most success as the Rockets went 23-3 overall, tied Markesan for a Trailways West Conference title with a 12-2 record and blew out Monticello — the third-ranked team in Division 5 in the final WisSports.net coaches poll of the year — by the score of 76-54 in the sectional semifinals hours before the WIAA canceled the remainder of the postseason because of the COVID-19 pandemic.

“I’ll get emotional just talking about it,” Moldenhauer said. “It was great to see how everyone came together at the end of the year. It was awesome. (Going after) every loose ball and (after) getting fouls that we don’t agree on everyone would sprint to each other, pat them on the back (and) circle up. And that was the great thing about everyone coming together as a family at the end of the year.”

The WBCA also picked Abel as honorable mention all-state in D2 after he led the Golden Beavers to an 11-13 overall record and a sixth-place finish in the Badger North Conference at 5-9. He led the Golden Beavers in scoring at 21 points a game to go along with 5.2 rebounds and three assists per contest and was chosen as first team all-Badger North Conference.

Abel said his work ethic allowed for his teammates to trust him with the ball.

“You put all these hours in working out so you know when you get the ball in your hands and you practice, it’s not thinking about it, it’s going out and doing it," he said.

Abel said his basketball IQ is a big reason for his individual success, which in turn helps out the team. His instincts are something that can't be taught.

“I don’t think a lot of players have the kind of characteristic that I have,” he said. “I can see the game where a lot of people can’t — passing, angles, when to shoot, when not to, and not just on the basketball court, but also being smart outside of it with school, being a leader, getting my teammates a shot when I need to and all that good stuff.”

Emler had the same feelings about getting his team involved because he knew if more of his teammates were contributing, then team success would come. Emler led the Cardinals at 20.1 points a game, while senior Alex Campbell was second at 10.5 points per game and junior Ryan Schulte was third at 10 points per contest.

“I would much rather score 10 or 15 in a win and have my teammates score, because wins are what matter most,” Emler said. “Points are cool and all, but I knew going in that if we had balanced scoring with multiple threats, that would be a much better weapon to have than just me scoring.”

That mindset helped lead the Cardinals to a 16-9 record and a second-place tie with Lodi in the Capitol North Conference at 7-3. Emler’s scoring average led the conference, and he also snagged 8.9 rebounds a game on his way to being named the Player of the Year in the league as well as honorable mention all-state by the Associated Press.

“I knew that in order to have team success, I would have to be scoring points and when I would be scoring points, teams would focus on me,” Emler said. “That would get my teammates open. It all comes back to being there for the team. That’s always my No. 1 goal is to win basketball games, and along with that came the points.”

Emler finished his career with 1,540 points, which moved him into first place in program history, surpassing 1992 graduate Erik Quamme’s mark of 1,353.

“While Ben will arguably go down as the best player to ever put on a Columbus basketball uniform, he is also one of the most unselfish players I have ever coached,” Columbus coach Ben Schambow said. “He truly only cares about winning and prepares harder to accomplish that goal than anyone. People will see the points he’s scored, but it’s the commitment he made to the game of basketball that should be the inspiration for the younger generation of Columbus basketball players.

The same can be said about Abel and Moldenhauer.

Beaver Dam's Nate Abel was selected to the All-Badger North first team after averaging 21 points a game. He was also honorable mention in Division 2 by the Wisconsin Basketball Coaches Association.

Columbus senior Ben Emler led the Cardinals with 20.1 points a game and was named Player of the Year in the Capitol North.

Randolph's Peyton Moldenhauer (right) drives to the basket during the Rockets' game against Cambria-Friesland on March 7 in the Division 5 regional finals.

Randolph senior Peyton Moldenhauer (left) drives to the basket as Portage's Matthew Miles defends during the season-opener on Nov. 30.