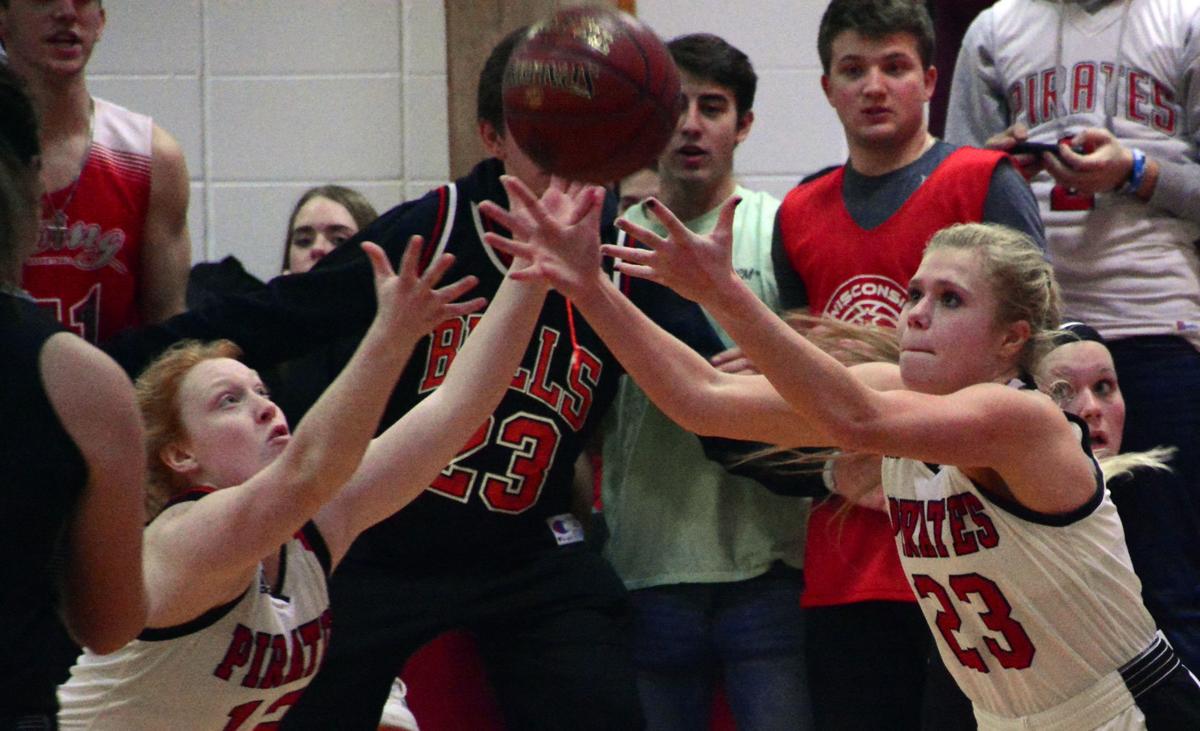 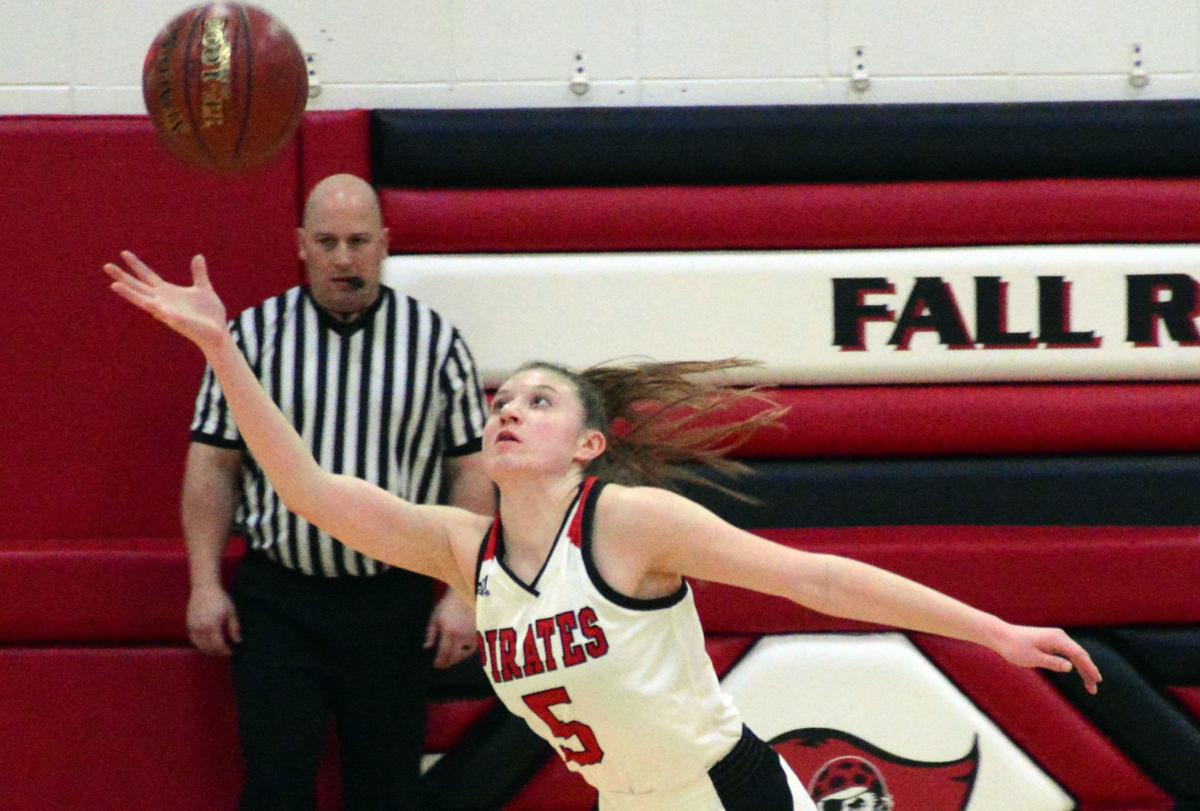 Fall River's Isabelle Gregorio tips a pass to herself and is off to the other end of the court for two points during the first half of Tuesday's Trailways West Conference game against Princeton/Green Lake. 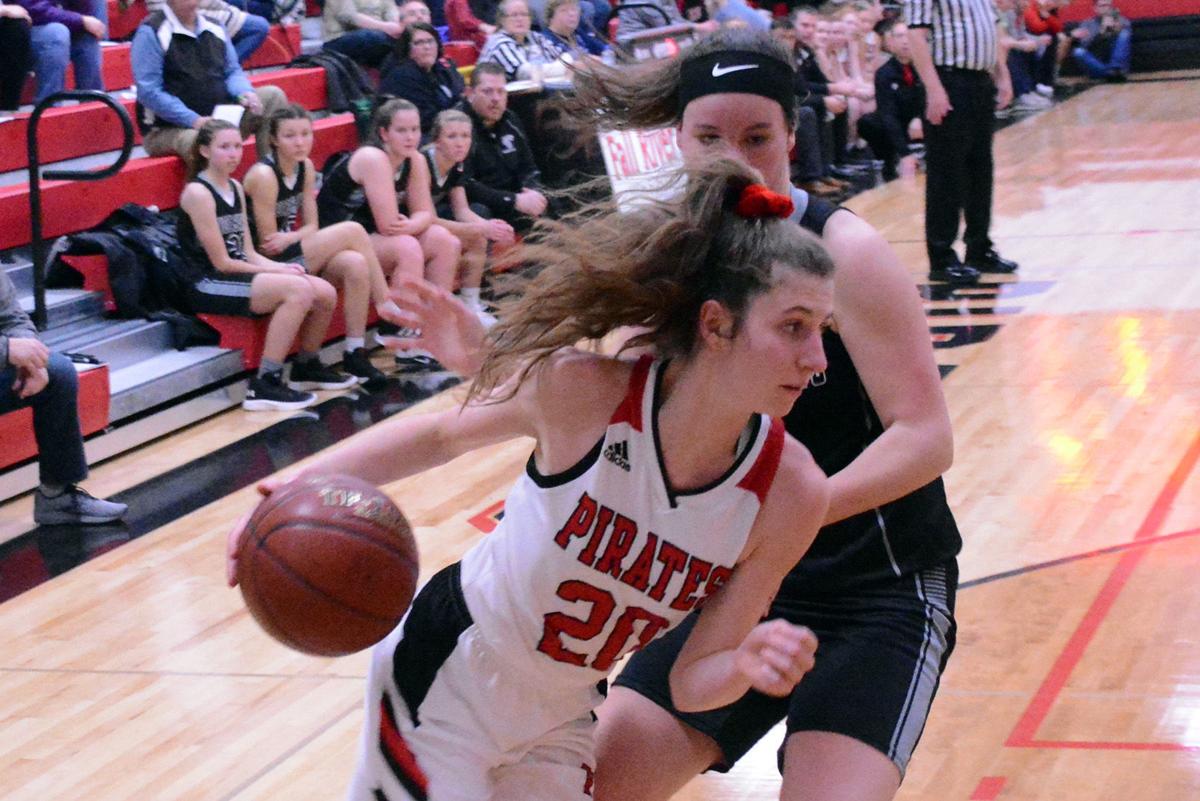 Fall River's Maddie Gregorio drives to the basket during the first half of Tuesday's Trailways West Conference game against Princeton/Green Lake.

FALL RIVER — The top priority entering any season for the Fall River prep girls basketball team is to win a conference title.

The Pirates took one step closer to reaching that goal on Tuesday night, when they defeated Princeton/Green Lake 42-28 to take a two-game lead for first place in the Trailways West Conference race.

“That’s always our first goal when we start the season,” Fall River coach Jim Doolittle said, referring to winning a conference title. “This just puts us one step closer. They’re a quality team and we have to face them again at their house. We have to face Randolph at their house. We’ve got a tough road in front of us, but I believe that my kids are ready.”

Fall River will try to keep the momentum going when it hosts Pardeeville on Friday. Meantime, the Tigersharks, who are tied with Randolph for second place in the conference standings, will travel to Rio on Friday.

The Pirates (12-1, 7-0), ranked fourth in Division 5 according to both the WisSports.net Coaches Poll and Associated Press poll, used tough defense to hold the Tigersharks (9-4, 5-2) to just four points in the first half.

“That’s what we hang our hats on,” Doolittle said of his team’s 22-4 halftime lead. “When I was talking to the kids, I said what we want to do is exert ourselves on the defensive end. When we do that we get offensive opportunities. We know that they’re a very good team. When they get us to a half-court situation, it could’ve been a little bit closer.”

The Pirates shot out to a 16-0 lead in the first 13 minutes, 25 seconds. Meanwhile, the Tigersharks didn’t get on the board until there was 2:41 left when Emerald Konkel hit one foul shot to make it 16-1.

Konkel, who is averaging 14.7 points a game, finished with 11 points and four of them were in the first half. She drained a triple with 1:17 left before half to cut the deficit to 18-4.

“The young lady (was) scoring 17 points a game,” Doolittle said. “She’s a very good ball player. Whenever she had the ball we always shaded two people down because front and back was kind of making a sandwich (around her) to make her decide, ‘am I going to shoot a tough, contested shot, or am I going to kick it out to somebody else?’ That’s what we wanted. We wanted her to kick it out, which she was doing at the beginning. Then later on she started to take the shots.”

Gregorio finished tied for the team lead in points with nine, while Rozinksi had seven. Sam Leisemann finished a point shy of a double-double with nine points and 10 rebounds for Fall River.

“We gave up some outside shots that won’t happen again,” Doolittle said.

Fall River saw its biggest lead of the night when Rebecca Tramburg hit a floater with 6:16 left to go up 41-21.

Fall River's Isabelle Gregorio tips a pass to herself and is off to the other end of the court for two points during the first half of Tuesday's Trailways West Conference game against Princeton/Green Lake.

Fall River's Maddie Gregorio drives to the basket during the first half of Tuesday's Trailways West Conference game against Princeton/Green Lake.