PREP GIRLS BASKETBALL: Portage unable to capitalize on fast start in loss to Mount Horeb
0 comments
Share this
{{featured_button_text}}
1 of 2 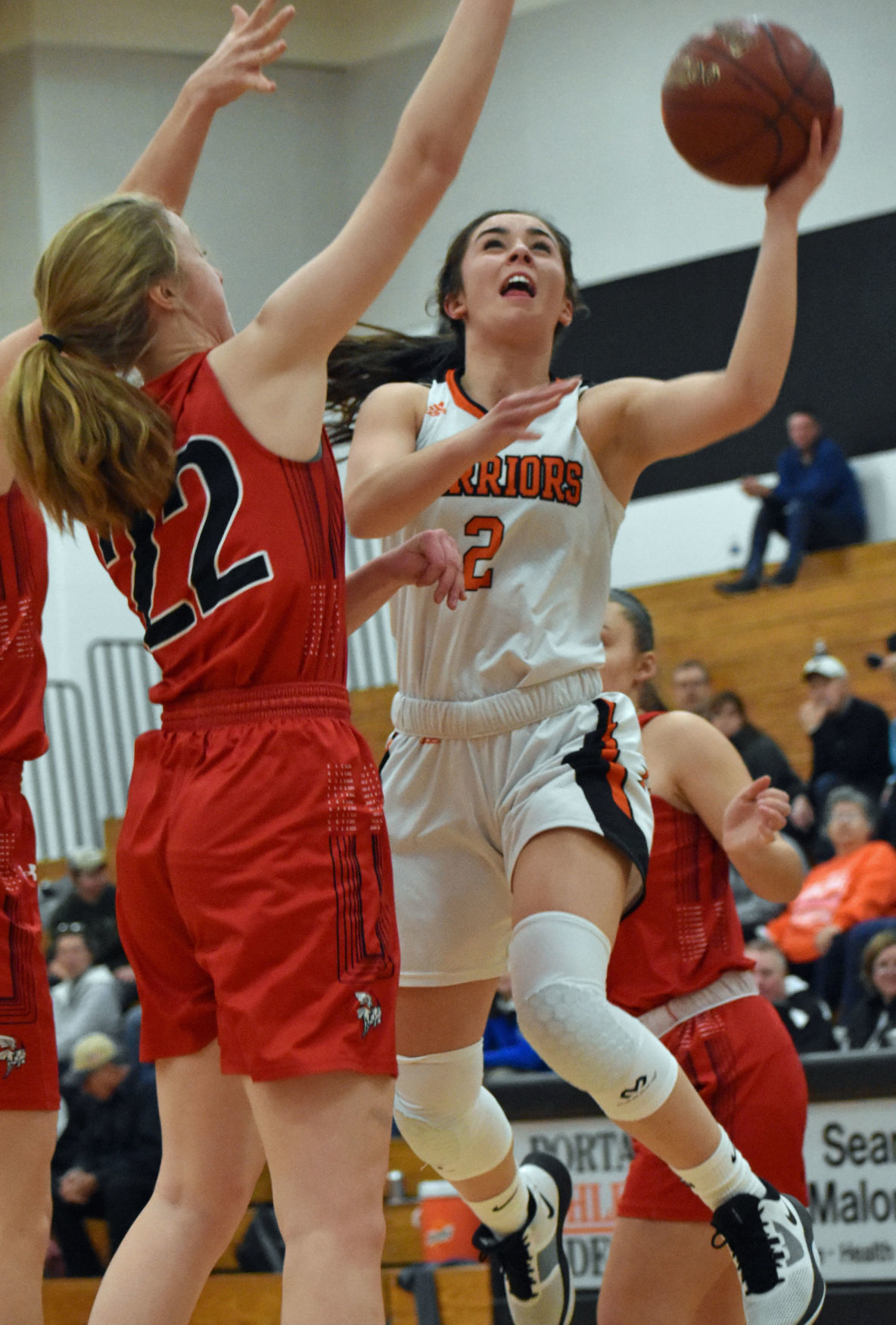 Portage senior Brianna Brandner puts up a shot in front of Mount Horeb junior Julia Magnuson in the first half of a Badger North Conference game in Portage on Friday. 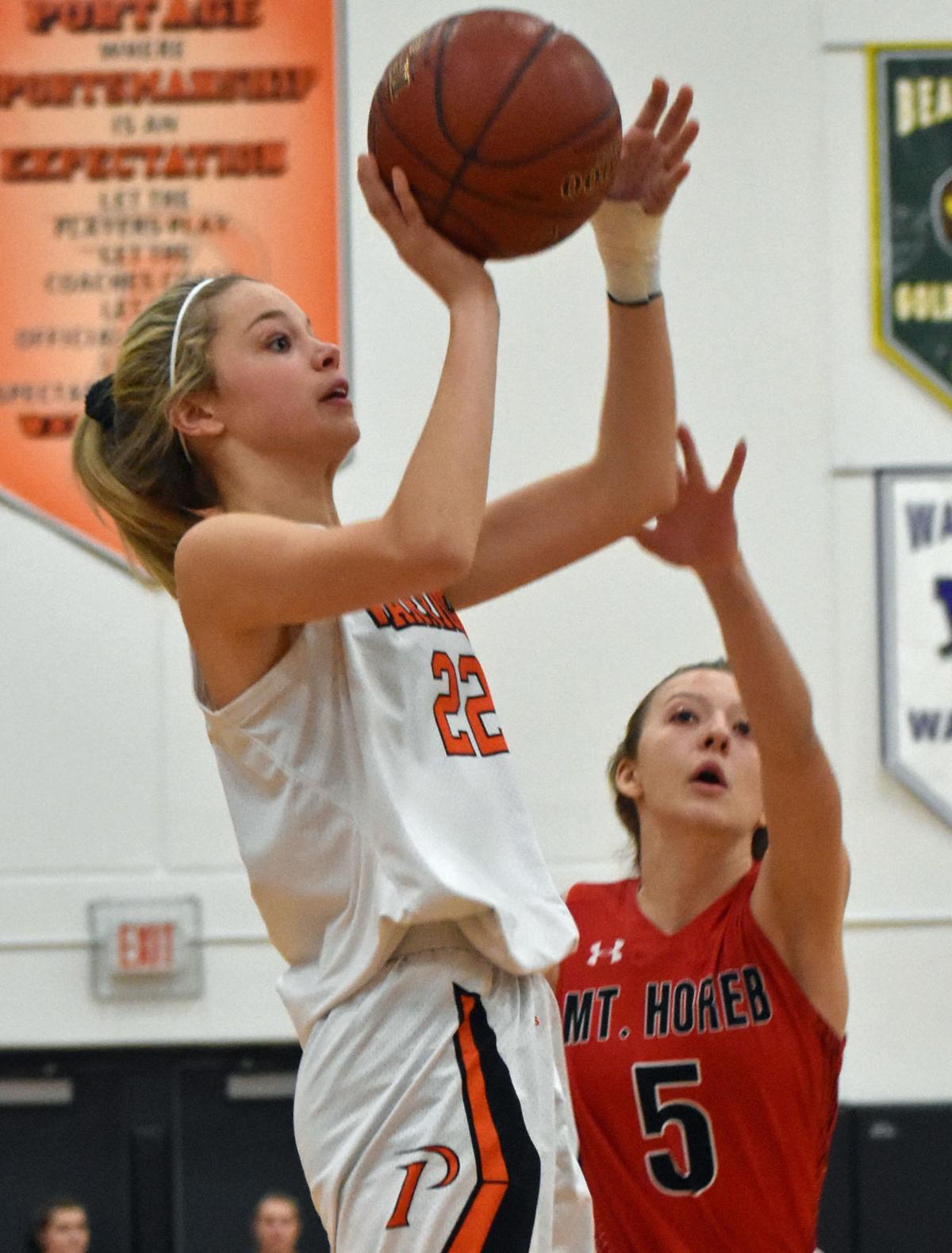 Portage sophomore Cameran Ratz puts up a shot in front of Mount Horeb junior Anna Ollendick in the first half of a Badger North Conference game in Portage on Friday.

For most of the first half of Friday’s Badger North Conference game against Mount Horeb, the Portage prep girls basketball team didn’t look anything like the team that was on the losing end of a 76-30 shellacking against Reedsburg on Tuesday.

The Warriors traded blows with the visiting Vikings, and appeared to be in position to make a push for their third win of the season, but that all changed in a 2-minute stretch late in the first half. That was when Mount Horeb scored 13 straight points, and in the process opened up a big lead on its way to a 62-39 victory over the Warriors at Portage High School.

Portage (2-12, 1-6 Badger North) came out of the locker room with plenty of energy to start the game, and took a 6-4 lead on a layup by senior Brianna Brandner, who led Portage with 11 points, with 14 minutes left in the first half. Mount Horeb regained the lead, but the Warriors remained in striking distance, as junior Genna Garrigan’s 3-pointer from the right wing cut Mount Horeb’s lead to 10-9 with 7:50 left in the first half.

Portage was still hanging in there with time running out in the first half as sophomore Cameran Ratz drilled a 3-pointer to cut Mount Horeb’s lead to 19-15 with 2:50 remaining in the half. Shortly after Ratz’s shot cut through the net, the Vikings seized control. For the first time all night, Portage started getting careless with the ball, and Mount Horeb (8-4, 3-4) took advantage. The Vikings scored 13 straight points in a stretch that lasted just over 2 minutes. The run included a trio of 3-pointers, including one by sophomore Grace Vesperman, who made four in the game, on her way to scoring a game-high 16 points.

Vesperman’s 3-pointer capped the run, and helped give Mount Horeb a 32-17 lead heading into the break.

“We knew that high 2-3 was potentially going to give us an issue getting the ball over half court, so we really worked hard on understanding the execution of bringing the guard over the top so there is three people on a side. The girls listened to it and did it like that,” Howe said.

The Vikings’ pressure finally got to Portage late in the first half, and not only did it lead to some easy baskets, but they came quickly, allowing Mount Horeb to turn its four-point advantage into a 17-point cushion in almost no time at all.

“We started really strong passing the ball confidently, then we made a couple of turnovers,” Howe said. “If you have that lapse, that’s where the gaps can happen, the runs. To play as long as we did, we started the game in the first 7 minutes, we didn’t have a turnover, that hasn’t happened to us all season.”

The Vikings were able to add to their lead in the second half, eventually taking a 59-29 lead with 3:05 left in the game. Portage was able to finish strong, outscoring Mount Horeb 10-3 over the final 2:55. It was a stretch that included a layup from senior Katelyn Belleau, and then consecutive jumpers from Ratz and junior Emma Kreuziger.

Howe was happy with the way her team played, especially in the early going.

“We had less turnovers tonight. We scored more points than we have consistently. It was fun,” Howe said. “I wish this is how we started the season, because now I feel like we’re 12 games behind.”

Another early hole eclipsed the Warriors in a sixth straight loss.

PRAIRIE DU SAC — Once opposing teams have gotten on a run this season, the Portage girls basketball team has been left in the dust.

Portage senior Brianna Brandner puts up a shot in front of Mount Horeb junior Julia Magnuson in the first half of a Badger North Conference game in Portage on Friday.

Portage sophomore Cameran Ratz puts up a shot in front of Mount Horeb junior Anna Ollendick in the first half of a Badger North Conference game in Portage on Friday.