The Warriors showed they have some flash up their sleeves recently, especially last Friday as big plays, on both offense and defense, carried them to a 26-14 win over Fort Atkinson in a Badger Small Conference game.

“It’s always good when it happens and we really focus on driving the football down, but there are some opportunities in a game that come along where we want to be able to take a shot down the field,” Portage coach Shane Haak said. “It’s great when you can capitalize on those opportunities.”

The Warriors (3-2) capitalized on a pair of big-play opportunities in the third quarter as they nursed a 14-7 lead after halftime. Portage forced a turnover on downs on the opening drive of the second half, tackling the Blackhawks punter inside his 10-yard line after a muffed snap. That stop turned into six points as Garret Crawford raced in from 6 yards out two plays later for a 20-7 lead.

Portage’s offense put the finishing touches on things to end the third quarter as senior Gavin Thompson connected with Ian Karpelenia on his only completion of the night, a 62-yard strike to put the Blackhawks to bed.

“I think it’s execution,” Haak said of the Warriors’ recent big-play success, including a 55-yard touchdown pass from Thompson to Ashton Krasovec in Portage’s 16-14 win over Sauk Prairie on Sept. 2.

“You don’t get too many of those within a game … and when they do come along they’re far and in between, especially against good teams.”

The Warriors will need more big plays on both sides against a surging Milton team that’s won back-to-back games in the two sides’ conference crossover matchup.

Passing game opening up for Beavers

Reedsburg’s ground game has worked wonders this season racking up over 1,000 yards and 11 touchdowns through the first four games this season.

The hard running has made life easy on the passing game, but the Beavers’ aerial attack has started to get off the ground in recent weeks. It gave Reedsburg a needed spark last Friday against Sparta, as the Beavers scored all three of their touchdowns through the air in a 20-13 win over the Spartans in a Mississippi Valley Conference game.

“It’s been really important for us and something we obviously have to build on,” Reedsburg coach Calvin Zenz said. “It’s been a bit of a work in progress based on how we kind of envisioned the offense before the season started and where we’re at now with some injuries. The last few weeks I think we’re starting to get to that point efficiently in the passing game.”

Kevin Green was incredibly efficient against the Spartans, completing 5 of 8 passes for 88 yards and all three scores. It marked the second straight game the senior gunslinger has thrown for over 85 yards after completing 12 of 19 passes for 177 yards and two TDs in the Beavers’ 30-15 win over La Crosse Logan on Sept. 9.

Zenz said the recent success “has been huge” for Green given all of the changes surrounding his weapons.

“I think some of the adjustments we’ve made are really starting to show and he’s just getting more comfortable with some of the newer things and guys he’s been throwing to ... so getting that timing down with the other guys has been really important,” Zenz said.

Zenz is confident the emergence of the Beavers’ passing game should begin to force opposing defenses into making a decision whether to stack the box or play Reedsburg (5-0) straight up. The first domino could fall this week when the Beavers travel to fellow league unbeaten Onalaska.

The Hilltoppers have allowed 31 points through five games.

Following a difficult start, Beaver Dam is finding ways to be successful, but the team’s winless record doesn’t show how much through five weeks.

“It’s hard to build confidence when you don’t have a tally in the win column,” Beaver Dam coach Brock Linde said. “It’s kind of an interesting conundrum where ... to realize you can win is only going to make sense when they actually do it.”

The Golden Beavers have been using a new quarterback since a 28-24 loss to Fort Atkinson in Week 3. The week prior against Baraboo — a 20-14 loss — previous starting quarterback, junior Camron Mendoza, had a lower-body injury and Linde inserted sophomore Eli Bryant. Bryant has performed well enough to keep the position and shift Mendoza over to running back.

Bryant completed 6 of 7 passes for 92 yards while Mendoza ran for 231 yards and five touchdowns in a 33-30 Badger Large Conference loss to Milton last Friday.

“Early in the year, we were trying to search for answers and who could hit the holes and who could read the holes,” Linde said. “(Mendoza’s) got it going. He’s starting to figure it out. He’s never played a true running back position until now. Every single week he’s gaining confidence and getting better. … The ground game is a real asset for us right now.”

Despite that success through the air and on the ground, Linde said the Golden Beavers (0-5, 0-3 Badger Large) beat themselves against the Red Hawks. Beaver Dam failed on a two-point conversion in the fourth quarter, missed three extra points and had another blocked, on top of committing 10 penalties for 75 yards.

“It’s not that those are the only plays that matter,” Linde said, “but leaving points out on the field is something we’ve got to make sure we clean up.

“Every time we get in these really close games and we play good teams, we’ve got to limit our mental mistakes. The physical things are going to happen, but it’s the mental things — the false starts, the offsides, coverage breakdowns — have to get cleaned up if we’re going to win some games.”

Beaver Dam can start this Friday when it meets Watertown for the 100th all-time meeting in the rivalry.

The high-flying Thunderbirds put their four-game winning streak on the line against a Rangers team coming off back-to-back losses. Baraboo didn't look pretty committing five turnovers last week, but the T-Birds' ground game got the job done churning out 324 yards and two scores on 47 carries, including 164 on 12 touches from Ben Burgess. Logan was held scoreless over the final 16-plus minutes and faded down the stretch in a 42-18 loss to Onalaska last week. Johnny Leaver had 139 total yards, including 79 yards rushing on 16 carries, in the loss.

The unbeaten Hilltoppers host the Rockets in a huge rivalry clash that's a potential early decider in the race to the Trailways Conference title. Cambria-Friesland got all it could handle from Deerfield last week, edging out a 28-27 win over the Demons. Trevor Krueger had 186 of the team's 314 yards rushing on 20 carries with three TDs. The Rockets fell on a late 2-point conversion against Johnson Creek for a 29-28 loss, their first of the season. Randolph rushed for 230 yards and three TDs but finished without a rusher gaining at least 70 yards, and a loss could end its title hopes.

The Cardinals welcome the Crusaders in a pivotal Capitol Conference clash nearly a year after they were supposed to meet in a WIAA Division 4 state quarterfinal game last fall. Columbus hasn't allowed more than two scores in a game following last week's 53-14 win over Beloit Turner, a game in which the Cardinals led 40-0 at halftime and amassed 500 yards of total offense. Edgewood is coming off its first loss of the season after falling to Lodi 23-7. New starting quarterback Mason Folkers threw for 193 yards, but the Crusaders had just 10 yards rushing.

The Warriors look to stay hot after rebounding with a 26-14 win over reigning Badger Small Conference co-champion Fort Atkinson. Junior Keagan Hooker continues to emerge as Portage's top offensive weapon after rushing for 126 yards and a touchdown on 17 carries against the Blackhawks. A surging Red Hawks team will be no easy task after holding off Beaver Dam 33-30. Aidan Schoen threw for 184 yards, a score and an interception on 9-of-13 passing in the three-point win, but the Milton defense was torched for 278 yards and five TDs on the ground.

The Beaver Dam, Watertown rivalry is a family affair for the Linde family

The Linde family first started playing in the Beaver Dam, Watertown football rivalry 51 years ago. It will be part of the 100th meeting, too.

A statement in a player spotlight by Ben Hanson fueled Colton Brunell to run wild in Columbus' big win over Madison Edgewood, setting up a conference showdown next week.

The Warriors delivered another memorable win at Bob Mael Field on homecoming in the site's 30th anniversary season. 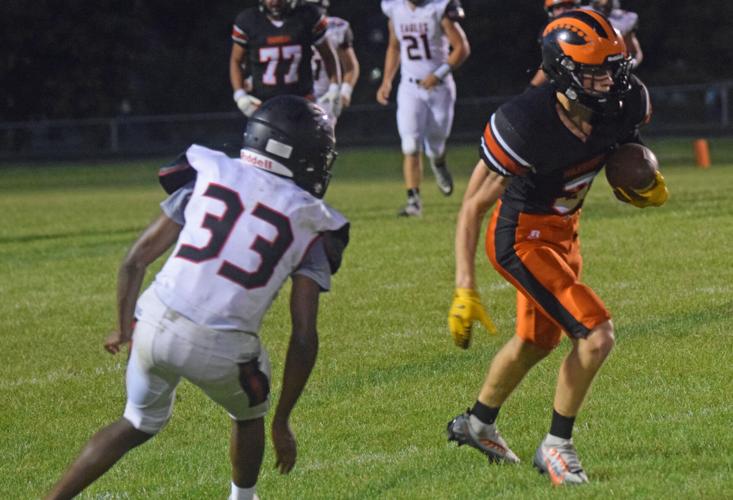 Portage senior Ashton Krasovec makes a cut after a catch against Sauk Prairie's Mike Blau during a Badger Small Conference game on Sept. 2. 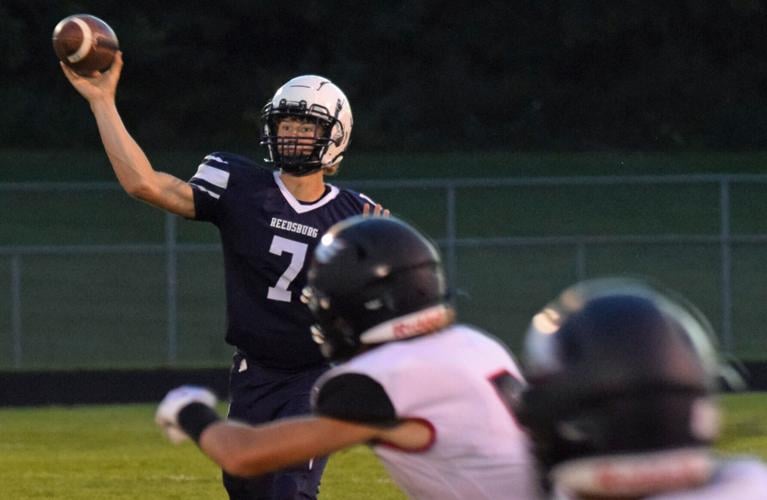 Reedsburg senior Kevin Green fires a pass during a nonconference game against Sauk Prairie on Aug. 26. 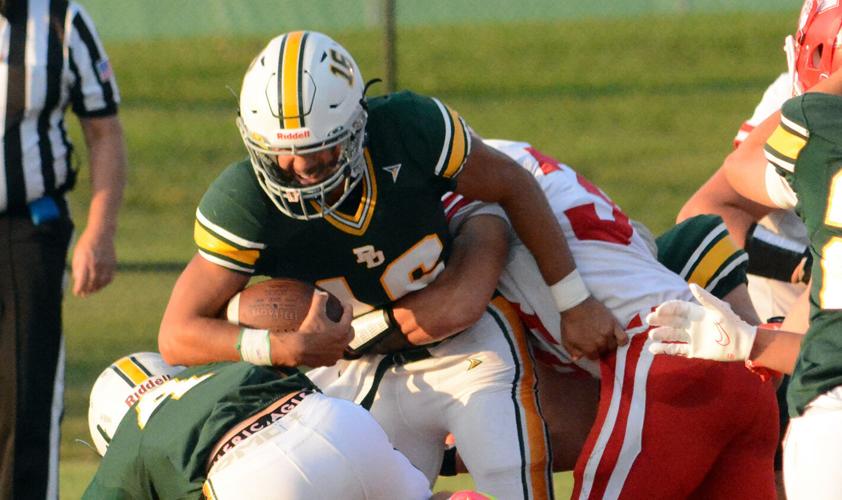 Beaver Dam's Camron Mendoza runs to the right during the first quarter of a non-conference game against Monroe on Aug. 19.