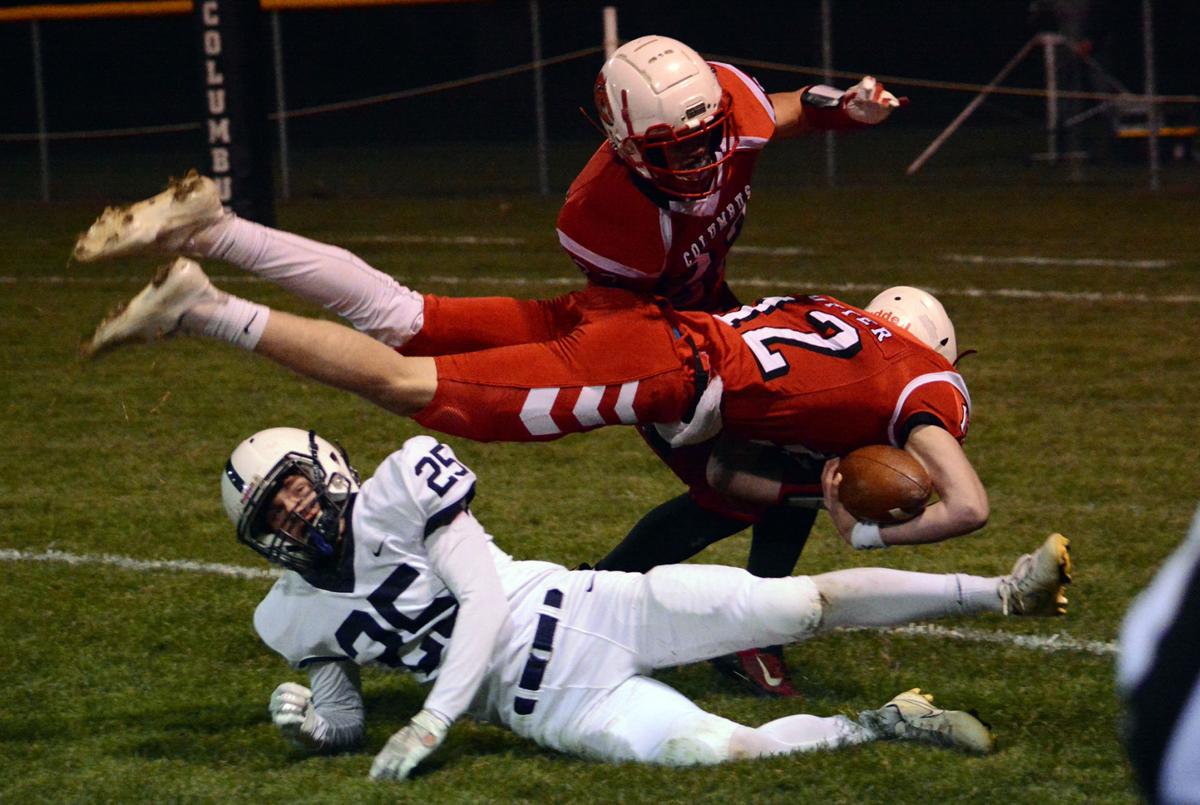 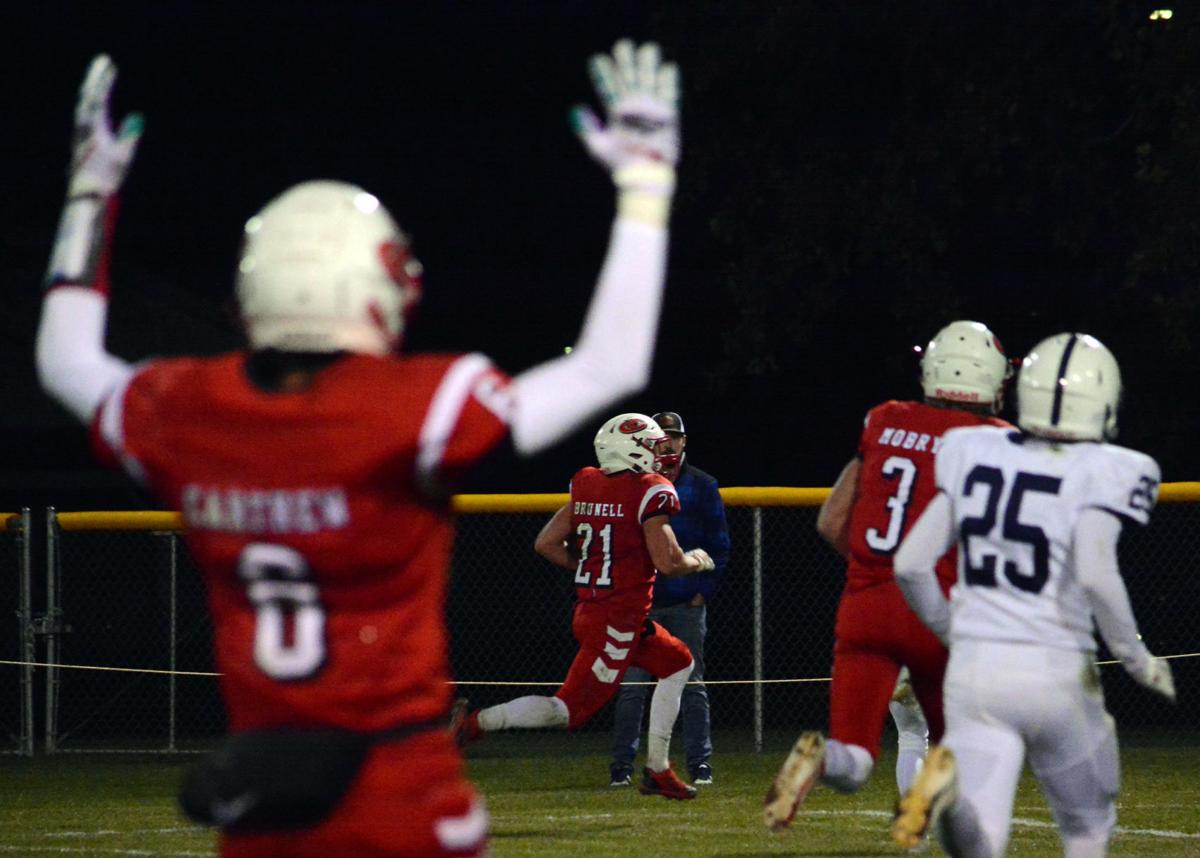 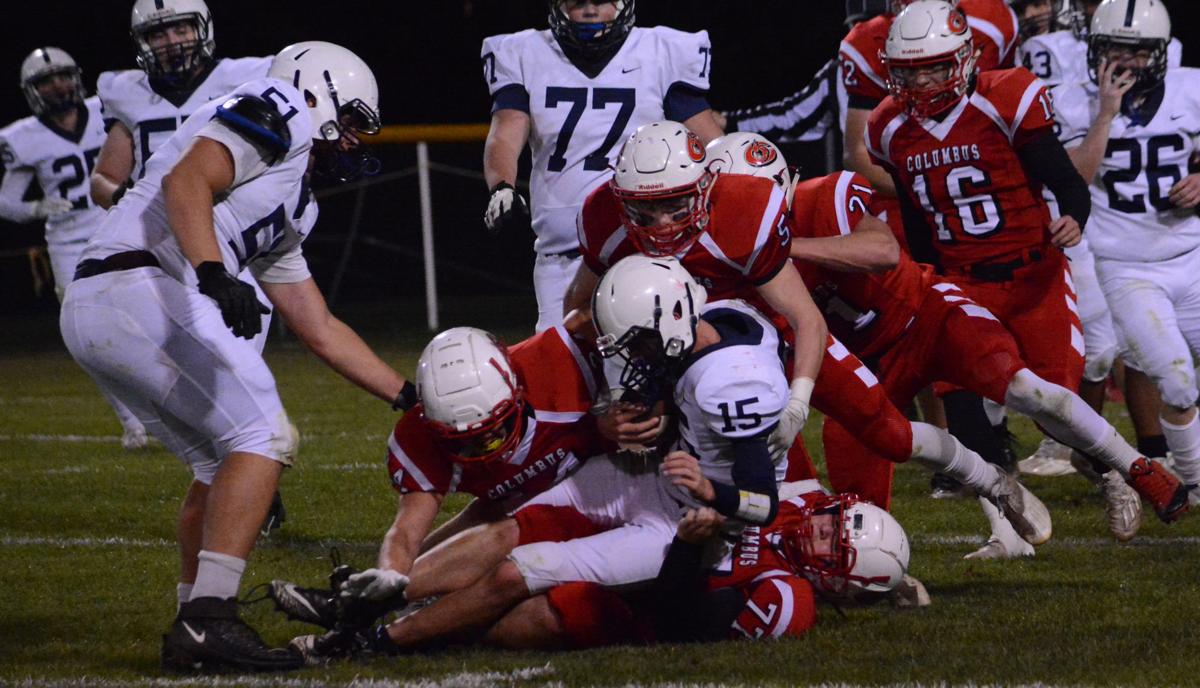 The seventh-seeded Warriors just couldn’t do it, as the second-seeded Cardinals found big play after big play, and an eventual 41-14 in the first round of the WIAA Division 4 postseason.

“They were loading the box, trying to stop our run because Colton (Brunell) and (Andrew) Pfeffer are just so good,” Columbus quarterback Nathan Cotter said. “Our receivers just go make plays. They’ll beat the corners and I’ll just throw it over top.”

Sophomore running back Colton Brunell found his way for 126 rushing yards and three touchdowns, and had a 66-yard receiving touchdown to lead the Cardinals. Brunell’s change-of-pace backup Andrew Pfeffer ran for 90 yards as well.

“Brunell is a great player and everybody is going to try to stop the run because he’s got a chance to score every play,” Cotter said. “It opens up passing opportunities for me.”

Cotter found open lanes to pass through and completed 6 of 8 passes for 214 yards and three touchdowns.

“From camp until today, he’s just done everything we’ve asked of him,” Columbus coach Andrew Selgrad said. “His confidence has grown and you can see it. We know he can throw, we just haven’t needed to.

“It was nice to see him finally get that opportunity to show what he can do. He did an awesome job.”

The Columbus offense had 459 total yards of offense with 245 rushing yards and 214 passing yards.

Cotter’s first touchdown pass was a rollout to the left where he found Brunell for a pitch-and-catch that went for a 66-yard touchdown just 12 seconds into the second quarter to put Columbus up 7-0.

Cotter almost had his first rushing touchdown several minutes later when his dive for the end zone was cut short at the Lakeside Lutheran 1 yard-line. Brunell plowed in on the next play to put Columbus up 14-0 with 5:58 left.

Columbus had all the momentum going in the first half, but a rare Brunell fumble gave the Warriors a chance at answering back right before halftime. Lakeside’s Sam Schmitt recovered the fumble at the Columbus 7-yard line with 7 seconds left before halftime.

The Warriors couldn’t convert in two attempts, but a pass interference call on Columbus’ Mason Carthew gave them an untimed down. That’s when quarterback Kooper Misna found Trey Lauber for a 3-yard touchdown pass to cut the deficit to 14-7 heading into halftime.

No matter, the Cardinals received the second-half kickoff and Cotter jumpstarted the offense with a 65-yard touchdown pass to receiver Brady Link to raise the lead to 21-7 with 9:24 left in the third quarter.

The Warriors’ ensuing offensive possession was cut short when Pfeffer recovered a fumble at the Columbus 44 with 8:02 left.

Three plays later, Cotter fearlessly stood in the pocket and threw a dart to receiver Braxton Nachreiner. Cotter was pummeled to the ground as Nachreiner caught his pass in stride for a 54-yard touchdown pass with 7:04 remaining in the third quarter. After a missed extra point, Columbus led 27-7.

“The safeties were playing down and it was one-on-one, man coverage,” Cotter said. “I just let the receiver go get it. They’re faster than them and I got hit after.”

Selgrad was pleased that Cotter got right back up after getting hit in the mouth on the play, too.

“He just kept fighting,” Selgrad said. “It’s just a testament to just how tough that kid is. He’s been doing it all season. He hasn’t gotten any of the glory like a normal quarterback would. He knows he can do it and he steps up when he needs to.”

Lakeside Lutheran responded with a 51-yard touchdown pass from Misna to Tyler Marty to cut the deficit to 27-14 with 3:55 left in the third quarter.

Misna completed 3 of 15 passes for 61 yards and two touchdowns. He also ran for 90 yards while teammate Caden Bou ran for 47 yards.

Not to be outdone by the Warriors, Brunell, who was at times battling up to nine guys inside the box, found a small crease a couple plays later and broke away for a 57-yard touchdown to raise the lead to 34-14 with 2:55 left in the third quarter.

“That’s why you keep your feet moving,” Selgrad said. “He just keeps fighting. It was a heck of a run. Everyone is looking at each other like, ‘Where did he come from?’ We thought he got a decent gain and all of a sudden it’s a touchdown. He’s been doing that all season and he’s a special runner.”

Cotter rounded out the Columbus onslaught in the fourth quarter when he ran for a 14-yard touchdown with 5:29 left to play.

After beating Lakeside Lutheran two weeks in a row, Columbus will advance to the next round, when third-seeded Lake Mills comes to town after it narrowly escaped Kettle Moraine Lutheran, 28-27, on Friday night.

“It is very hard to beat a team twice,” Cotter said. “We had a great game plan coming in and we just executed it. We had great defense and got some big stops.”

Selgrad went one step further about how hard it is beating a team two weeks in a row.

“I’ve said it from the beginning, I don’t want to face a triple-option team in the future,” he said. “(Lakeside Lutheran) is really good. They’ve got a good group there. We knew it was going to be a dog fight.”