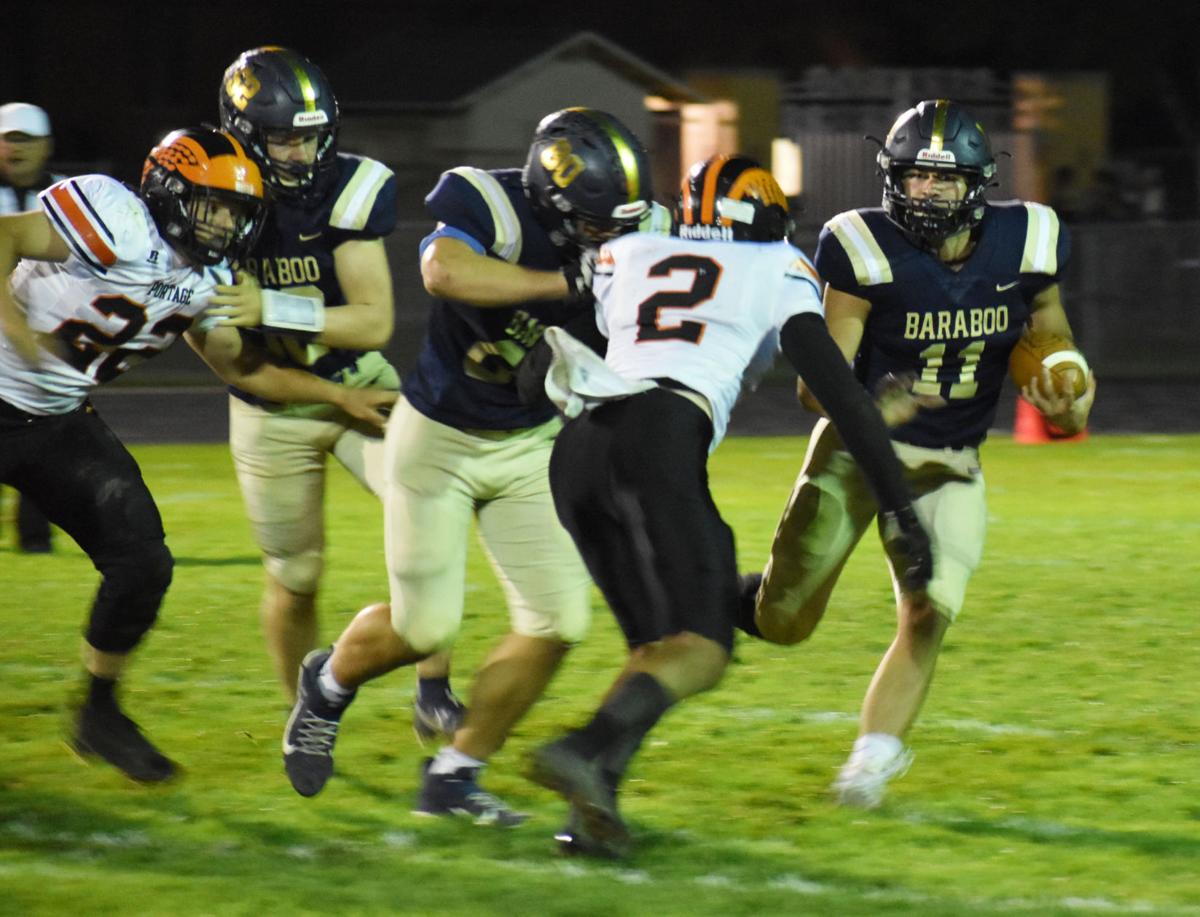 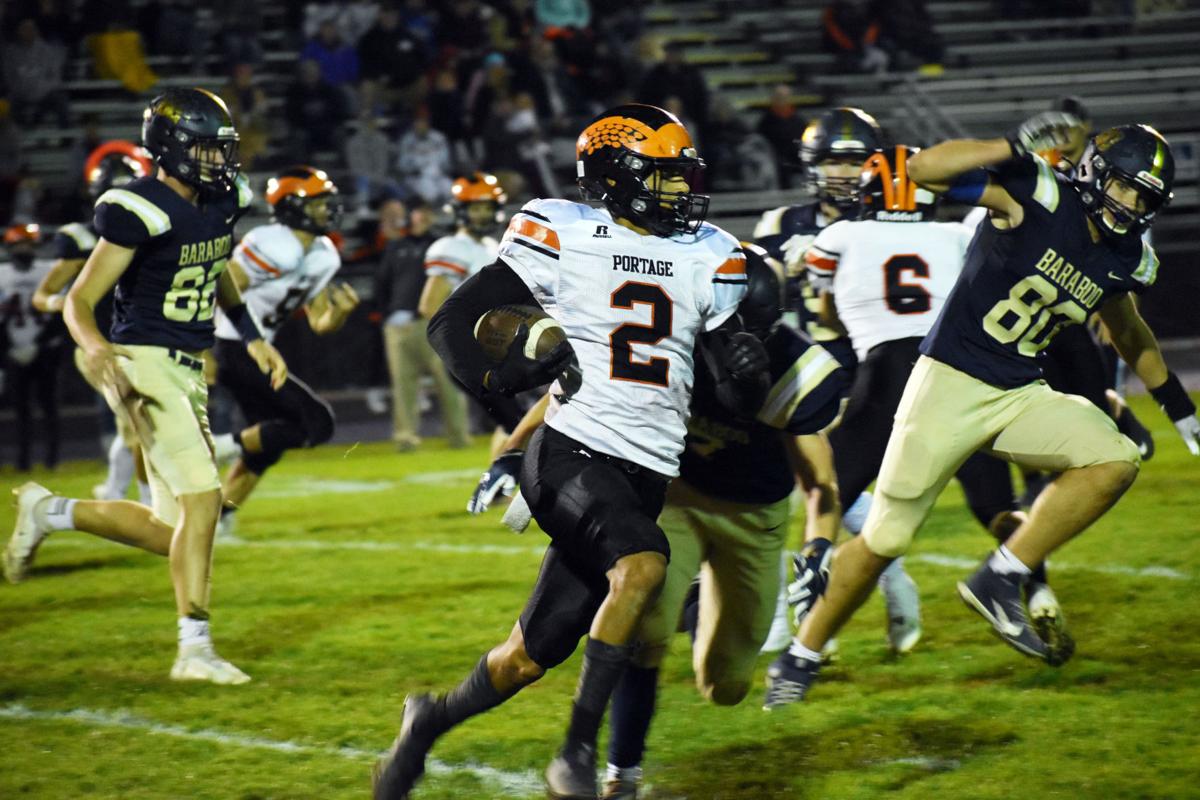 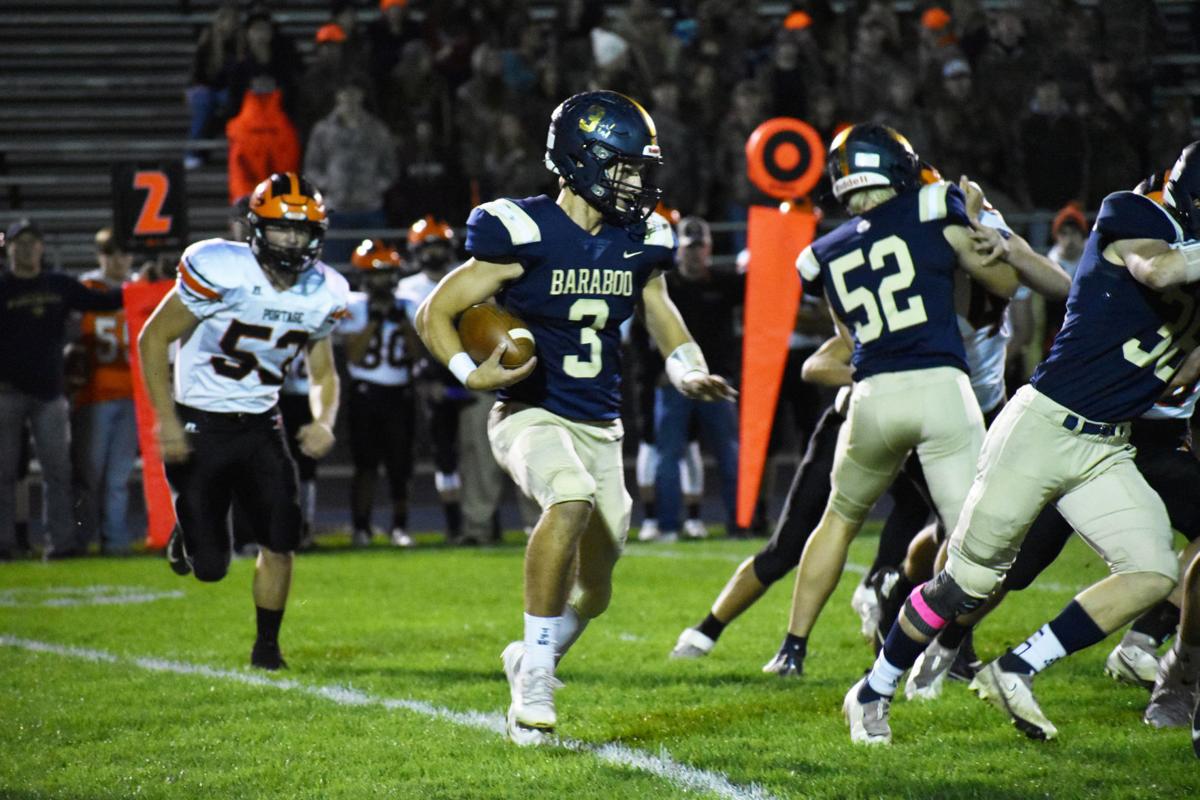 BARABOO — The Baraboo Thunderbirds needed a victory to enter the playoffs on a positive note after a rocky second half of the season. The Portage Warriors were searching for a victory that would guarantee them a spot in the postseason.

Thanks to three touchdown runs by quarterback Luna Larson, and a big pick-six interception return by senior Evan Kephart early in the second half, it was Baraboo that got the victory that it needed, turning back the Warriors 34-19 in a Badger Small Conference game at Flambeau Field on Friday night.

While Baraboo (7-2, 5-2 Badger Small) knows it will be playing next week when the playoffs begin, the loss for Portage (5-4, 3-4) means the Warriors will likely need the WIAA tie-breaker scenarios to go their way as one of the many teams across the state with a 3-4 conference record.

The victory for Baraboo came in what was Larson’s return to the defensive side of the ball. Larson hadn’t manned his middle linebacker spot since getting hurt against Stoughton back on Sept. 10. Larson did return at quarterback two weeks ago, but he provided a huge spark in his defensive return against Portage.

“That’s a huge difference for us. He creates problems for the offense when you get him in the mix,” Baraboo head coach Steve Turkington said. “He didn’t play the whole game on defense, but when he was in there, he made some really nice plays. He makes our defense a lot better.”

Baraboo went 74 yards on the opening drive of the game to take the early lead. Senior running back Kane Mahoney finished the impressive opening drive with a 21-yard touchdown run, which was followed by Brady Henry’s point-after to give the Thunderbirds a 7-0 lead with 7 minutes, 18 seconds left in the opening quarter.

Neither team scored again until midway through the second quarter when Larson scored on a 2-yard QB keeper that gave the T-Birds a 14-0 lead.

Portage finally got on the board with 3:09 left in the first half when quarterback Gavin Thompson connected with senior Jaden Kikkert for a 73-yard touchdown pass. On the play, Thompson threw a strike to Kikkert in the right flat, and when a Baraboo defender slipped on the play, there was nobody that could catch Kikkert as he bolted down the right sideline for the score. Portage’s 2-point try was no good, making the score 14-6.

A big kick return by Baraboo’s Luke Vittengl gave the T-Birds the ball on the Portage 43-yard line on the ensuing possession, and Baraboo cashed in on the prime field position. Baraboo quickly marched down to the 11-yard line where Larson took the snap and plowed over multiple Portage would-be tacklers on his way to the endzone for the score, Henry’s boot gave Baraboo a 21-6 lead heading to the half.

Turkington said his team’s recipe for success was simple.

“We made some nice plays on defense early and then offensively just kind of controlling the ball, which is kind of our standard thing,” Turkington said. “I think that was the difference, running the clock by running the ball.”

Baraboo got maybe the game’s biggest play on Portage’s first possession of the second half when Kephart intercepted a Thompson pass and returned it 40 yards untouched for a touchdown that gave the T-Birds a 28-6 lead with 10:03 left in the third quarter.

Portage tried to close the gap and did with a 67-yard drive that resulted in a 2-yard touchdown run by senior Ethan Bleich, but the two-point try failed, making the score 28-12 with 2:51 left in the third quarter.

Baraboo got its fifth and final TD of the night when Larson got loose for a 21-yard scoring scamper that made it 34-12.

Portage was able to get one final score after a Baraboo fumble gave the ball back to the Warriors with just 49 seconds left in the game. That set up a 2-yard touchdown run by sophomore Haakon Johnson with 24 seconds remaining to make it 34-19.

Baraboo will now get ready for the opening round of the playoffs, where Turkington hopes his team will start a long postseason run.

“Last week against Sauk and this week against Portage we were just trying to right the ship and get back to playing like we did early in the season. And Luna is a big difference-maker when we have him on both sides of the ball,” Turkington said. “I think we’re getting to that point again as we hit the playoffs. We just really had to buckle down and get ourselves right, and we did that tonight, I think.”

A punishing ground game and swarming defense has helped the Pumas rattle off four straight wins to earn their first trip to the postseason since 2014.