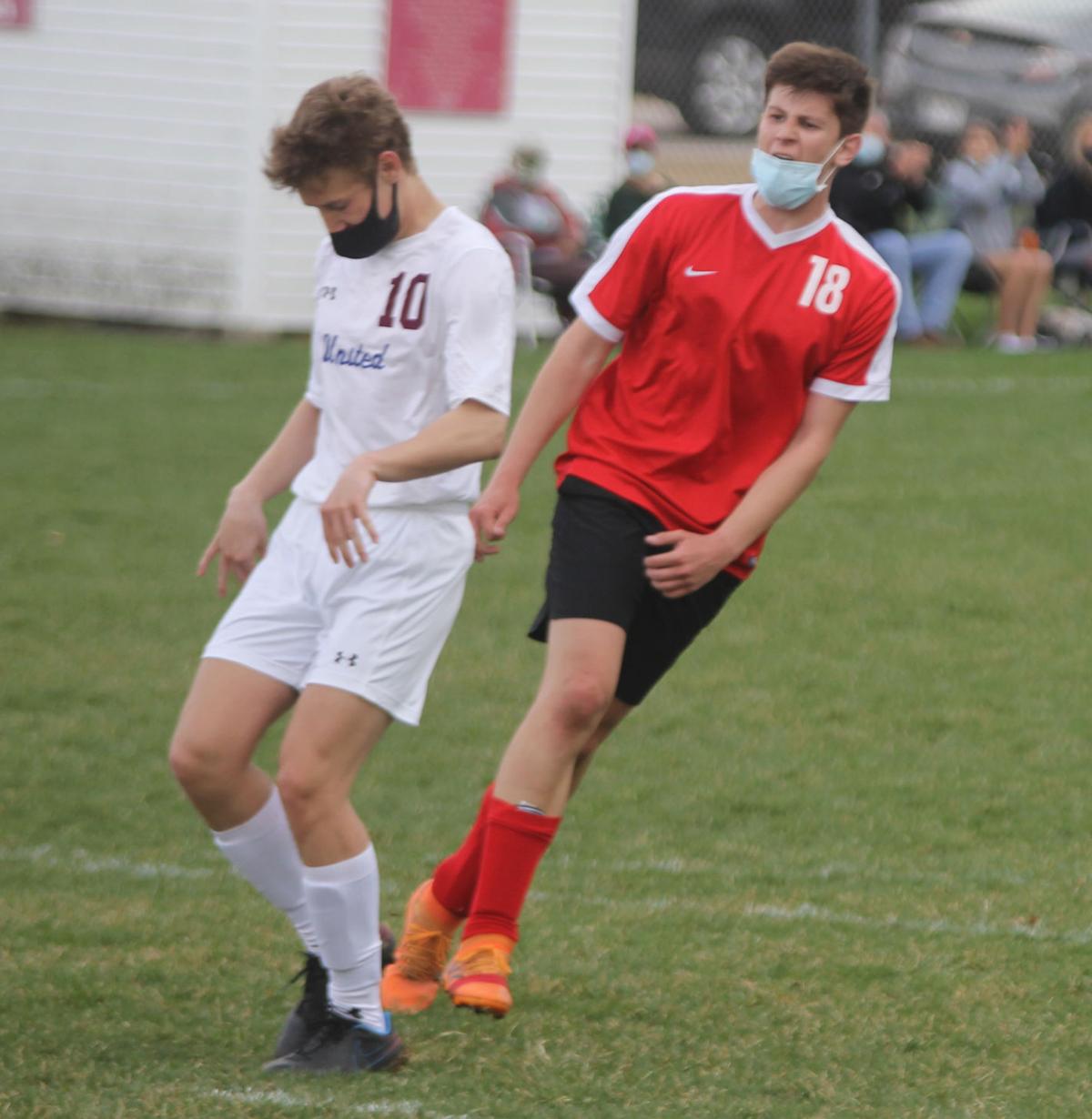 Columbus/Poynette's Tyler Milewski (18) reacts after scoring down the first half of Thursday's home win over Cambridge/Deerfield. 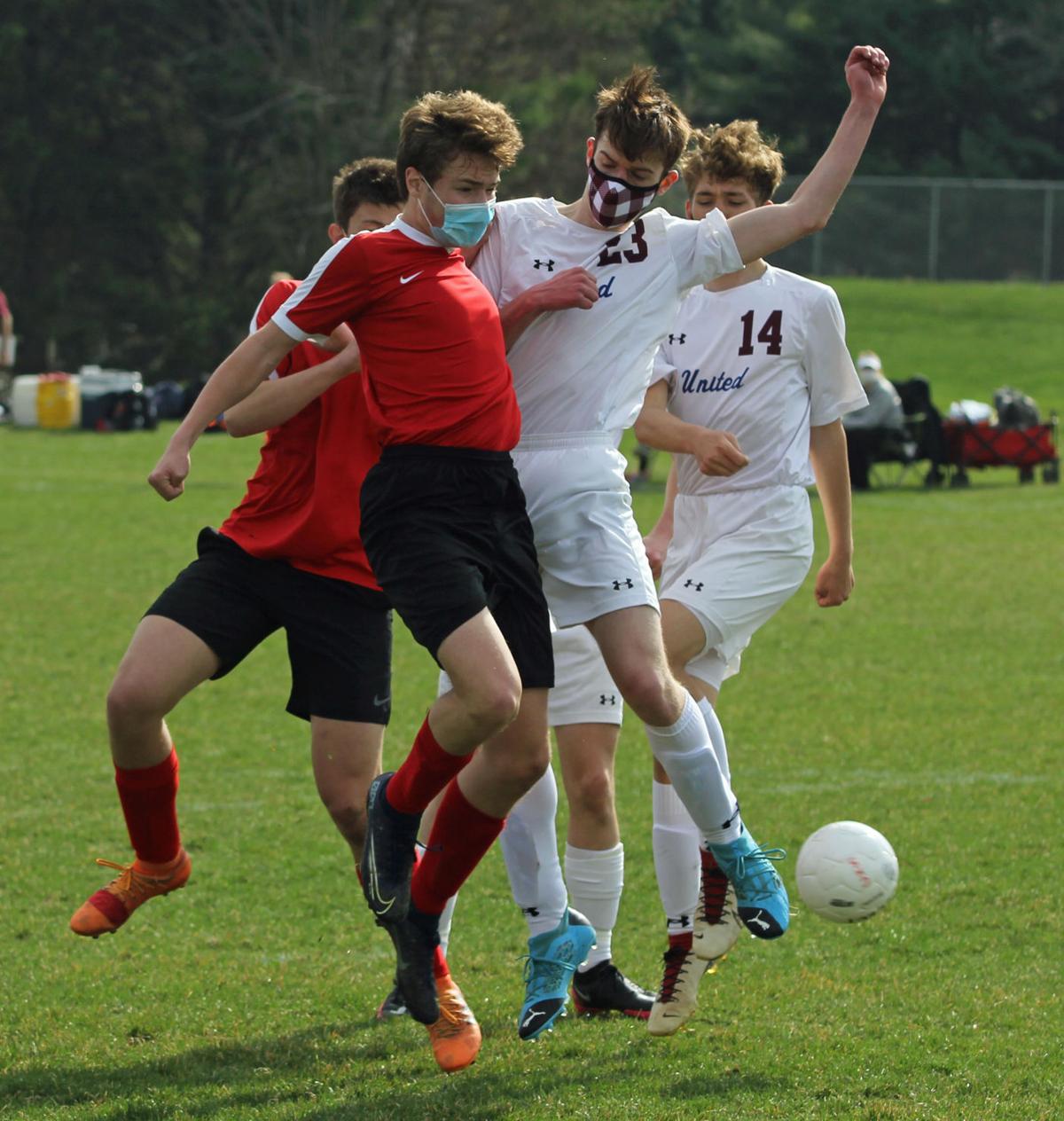 Columbus/Poynette junior Nathan Koehler (left) battles for possession in front of the Cambridge/Deerfield goal during Thursday's game in Columbus.

The Cardinals opened the season with a 5-1 loss to Walworth Big Foot/Williams Bay, before rebounding with a 6-0 shutout win over Lomira.

The newly formed, temporary co-op proved it can do things the hard way, holding off Cambridge/Deerfield down the stretch for a 2-1 home win in a Capitol Conference game. The victory moved the Cardinals to 2-1 in the early stages of the WIAA’s alternate fall season.

“I was really happy with the effort from the player,” assistant coach Lucas Aplin said after the win. “They came out really strong in the first half and I think we stuck to the things we wanted to do.”

The Cardinals (1-0 Capitol Conference) came to the field Thursday knowing it’d be more of a battle against a team that they had a six-game losing streak against.

It’s a battle they led throughout thanks to an early throw-in. Tyler Milewski tossed the ball into the middle of the box where it found the foot of Nathan Koehler, who buried it in the back of the net to give the Cardinals a 1-0 lead in the fifth minute. It was the Cardinals’ first goal against Cambridge/Deerfield since 2015.

They went on to control possession for much of the first half, frequently testing Cambridge/Deerfield goalkeeper Dale Yerges. The senior saved a Dacota Potter shot in the 29th minute, tipped a Tony Genco shot over the crossbar in the 31st and got his hands on a cross intended for Genco in the 37th.

“We identified early on that we wanted to keep the ball up in their half,” Aplin said of the Cardinals’ style of play. “We kind of let them try to play out of the back. As they were playing out, we would pick the ball up and then go at them from there rather than pressuring super hard.”

Columbus/Poynette goalie Quinn Meinholz didn’t see much action, but he came off his line to clear the ball in the 33rd minute. Cambridge/Deerfield (0-2) also sent a deep free kick over the crossbar.

The Cardinals struck again in the 40th minute as Milewski turned scorer after being the provider on the first tally.

He took an assist from Genco and from the top of the box fired it past Yerges with 4:56 remaining in the first half for a 2-0 lead.

The Cardinals took the two-goal lead into halftime, then kept the ball in their zone for the early portion of the second half.

The United curled a cross into the box and Jack Nikolay made sure not to waste the chance as he slit to send it past Meinholz, inching with 2-1 with 12:37 left to play.

The Cardinals didn’t let the momentum build however, keeping a clean sheet the rest of the way and creating multiple scoring chances in the process. Columbus/Poynette kept on the counter attack until the clock ticked away and the Cardinals celebrated their first win against Cambridge/Deerfield since a 1-0 home victory on Sept. 10, 2013.

“They got one late, but we held on,” Aplin said. “We were playing a little differently because it feels like the pressure’s on, but the guys held on and were working hard.”

Columbus/Poynette will return to action Saturday at Lodi.

“Our first game was after just five practices, so we didn’t feel super prepared.” Aplin said of the Cardinals’ early-season development. “Last game we came out strong. It wasn’t as close of a game as this one, and then this one I think we really saw how much we’ve improved so far.”

The sun was out most of the day Tuesday, with temperatures reaching the low 60s at one point.

Columbus/Poynette's Tyler Milewski (18) reacts after scoring down the first half of Thursday's home win over Cambridge/Deerfield.

Columbus/Poynette junior Nathan Koehler (left) battles for possession in front of the Cambridge/Deerfield goal during Thursday's game in Columbus.