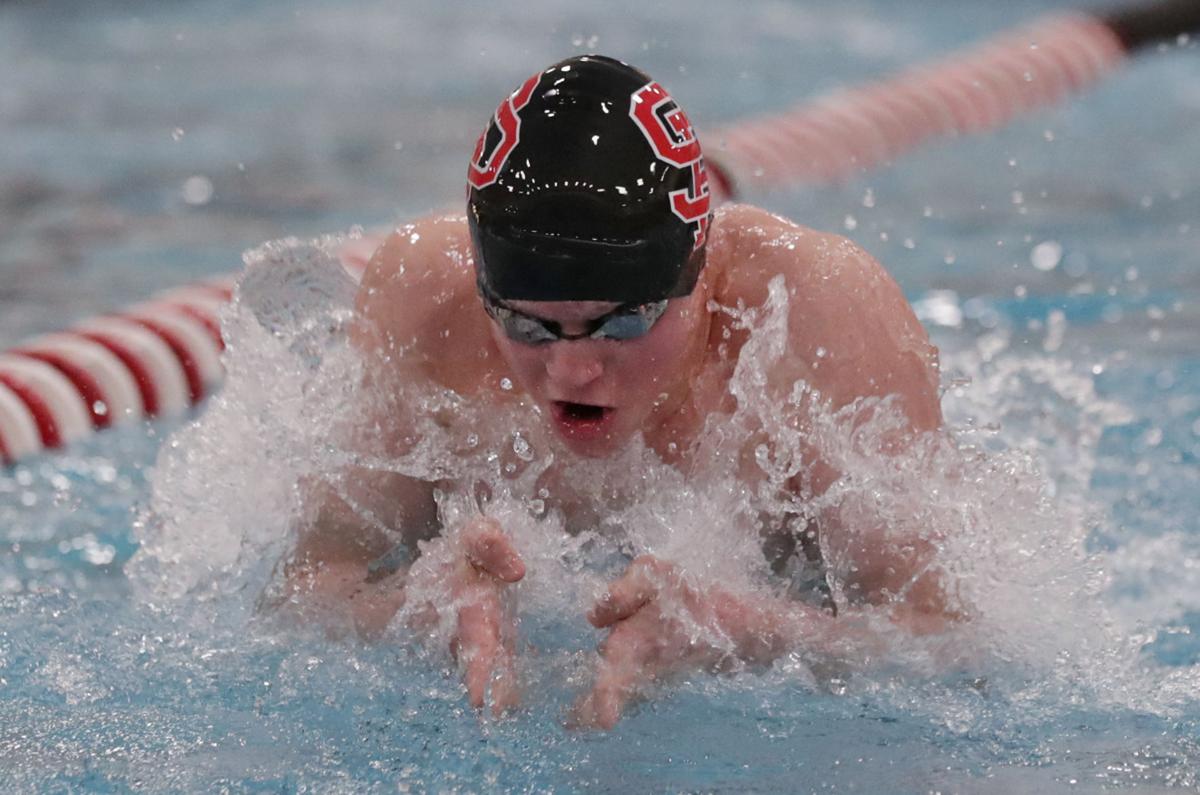 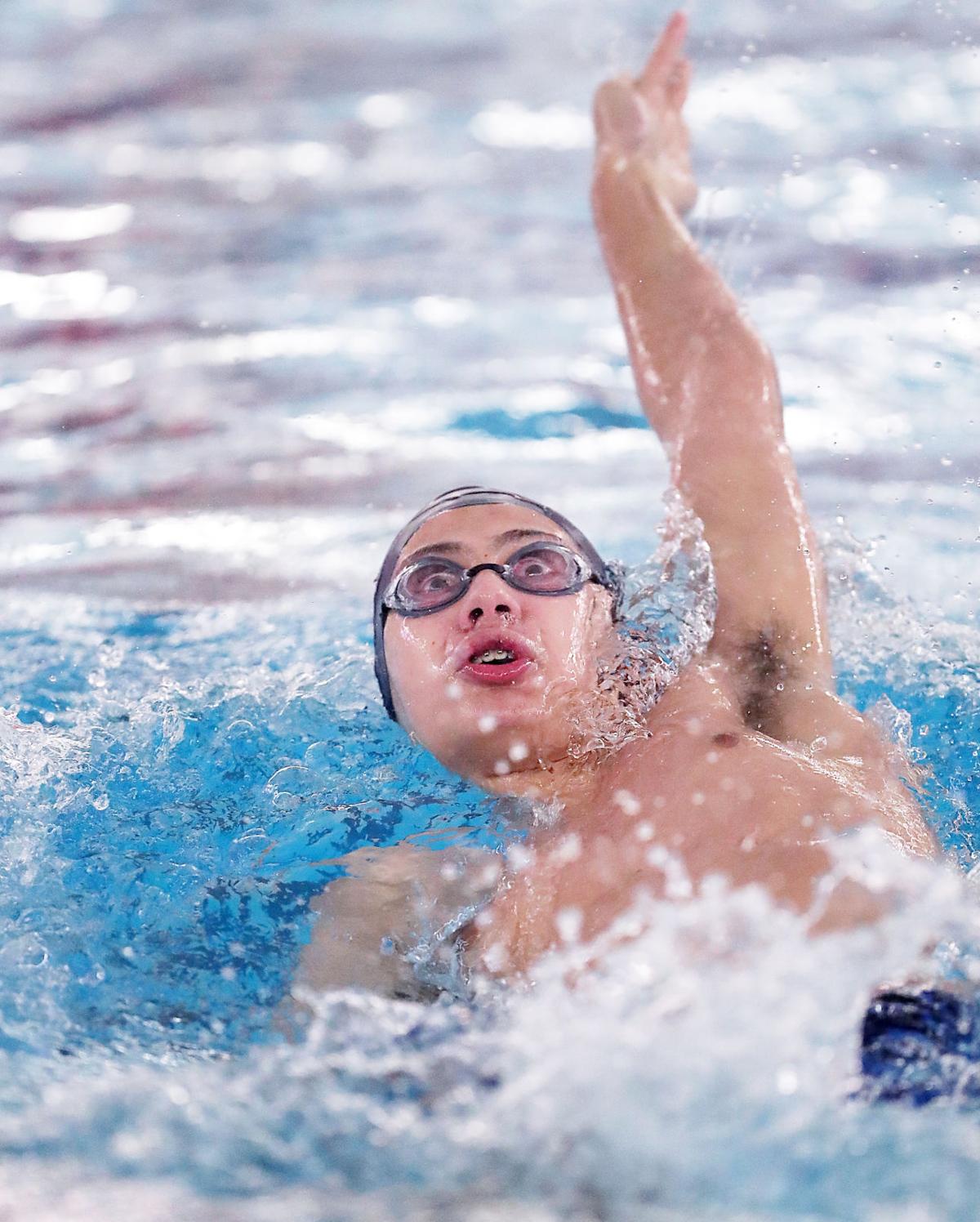 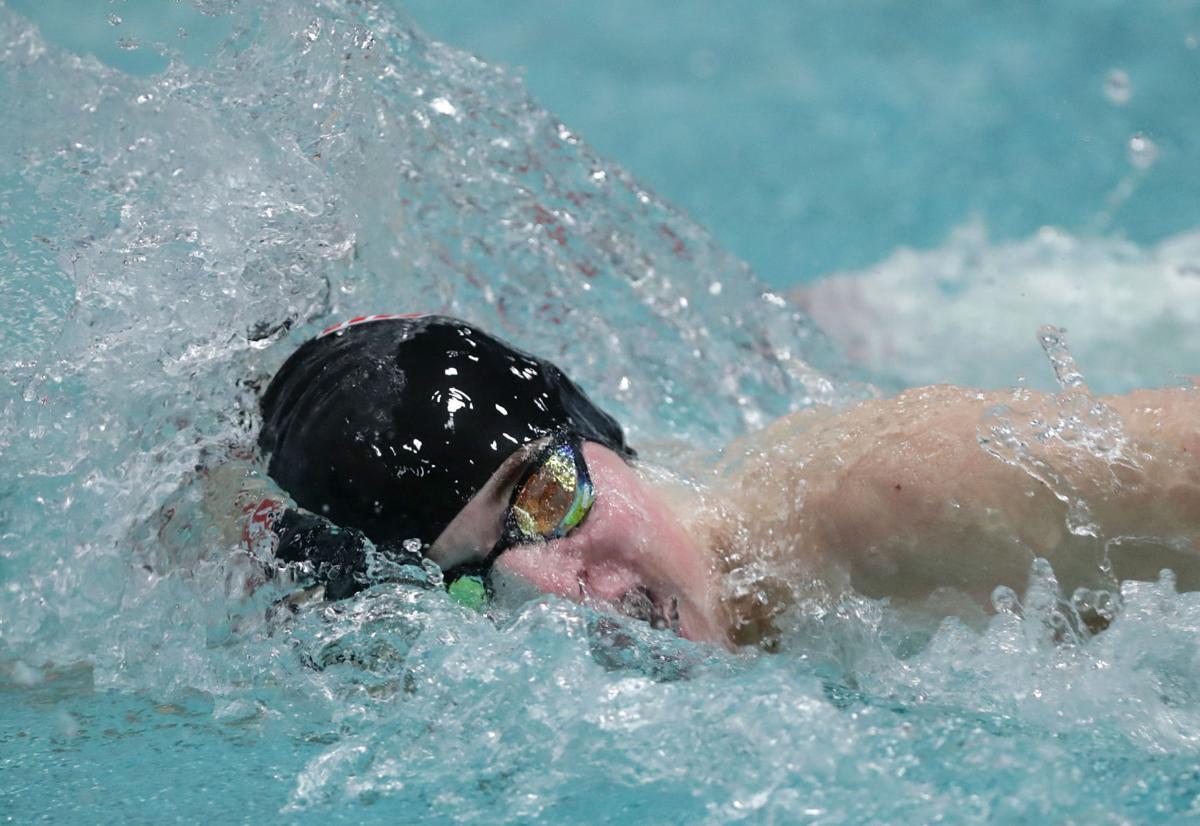 Middleton's Nick Chirafisi competes in the 400 yard freestyle relay during the WIAA Division 1 state boys swimming and diving meet at the UW Natatorium in Madison, Wis., Saturday, Feb. 22, 2020. Middleton took second place in the event with a time of 3:06.11. AMBER ARNOLD, STATE JOURNAL 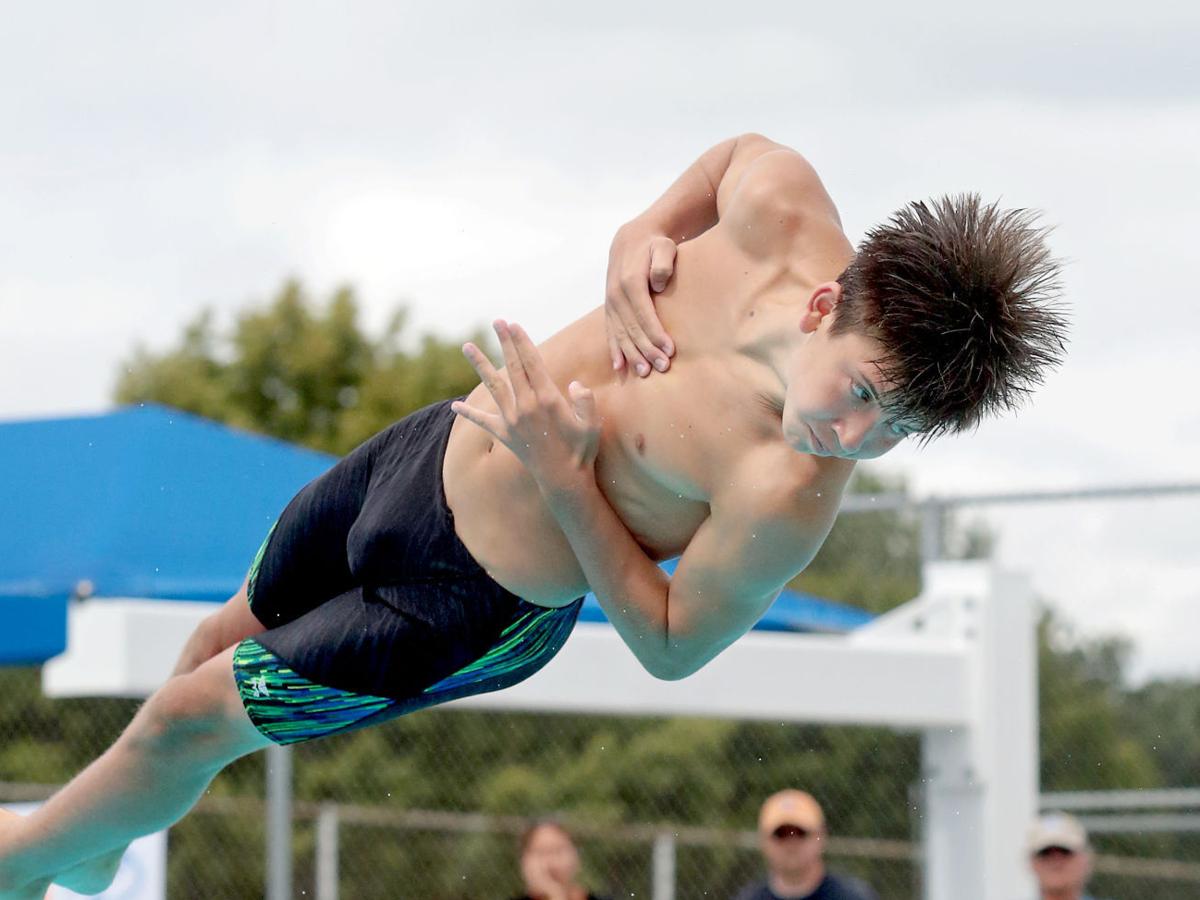 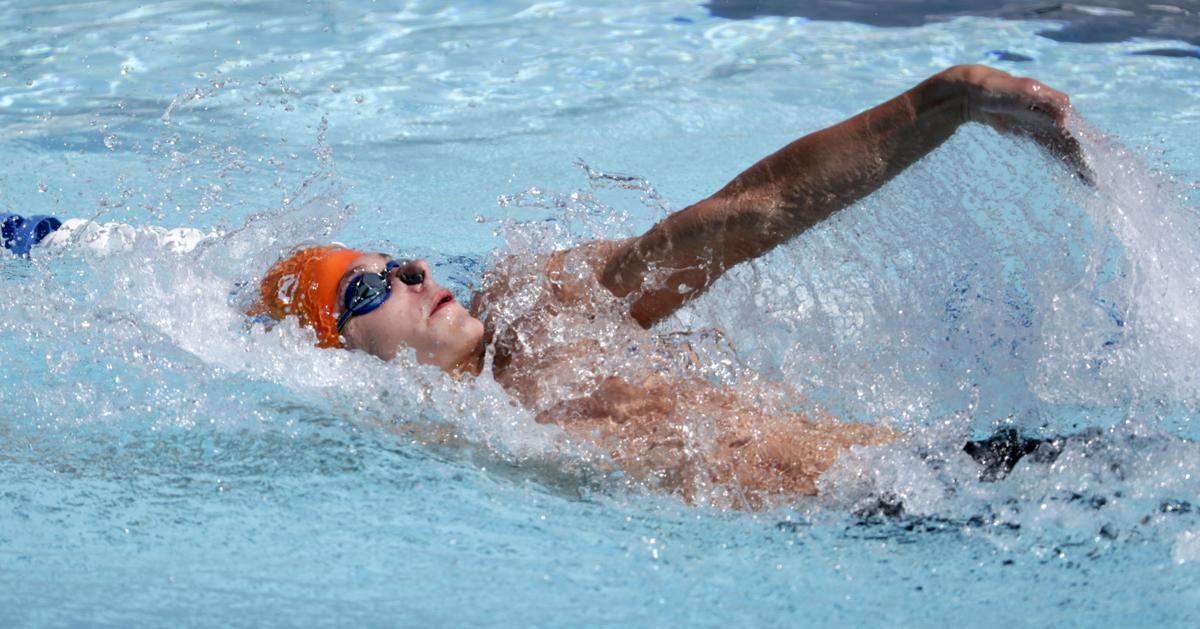 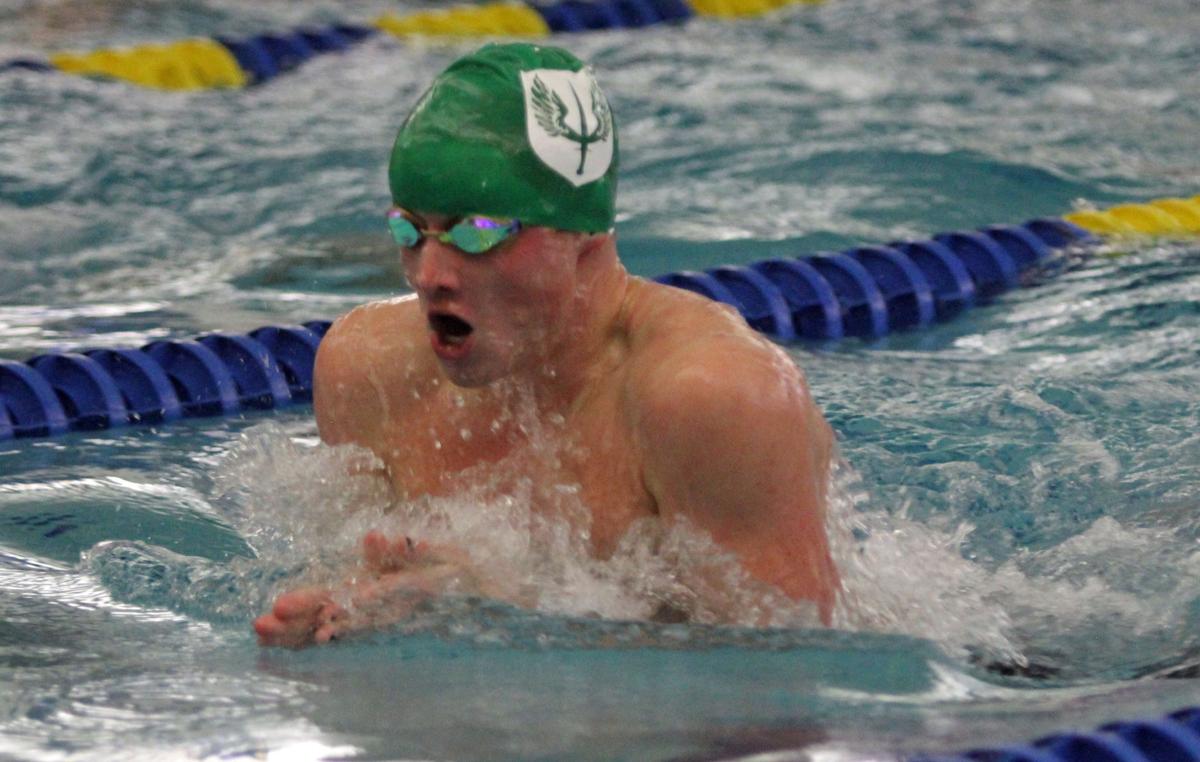 When: Friday and Saturday.

Tickets: Tickets, $11 each, are available only through schools, with a limited number available to each participant.

Live streaming, souvenirs: Every event will be streamed live on the WIAA.TV portal of the NFHS Network, on a subscription basis. Archived streams will be available (with subscription) starting 72 hours after the meet. … A free program may be downloaded here. … Meet apparel can be browsed and purchased at wiaaswimdive21.itemorder.com.

Results: Results will be posted online regularly at www.wiaawi.org/Sports/Winter/Boys-Swim-Dive/Tournament

COVID-19 impact: Due to the pandemic, the meet has been temporarily moved from its usual home, the University of Wisconsin Natatorium, as Dane County restrictions have prevented any swimming meets from being held inside the county all season. Also, the four Madison public high schools are among those who have opted out of postseason participation. Their absence is significant: Madison Memorial has won six team championships and Madison West two over the past 10 years. The state field has been fixed at 24 qualifiers per event in Division 1 and 16 per event in Division 2.

Division 1: Last year, Sun Prairie enjoyed its best finish at state, taking third. This year the Cardinals are in the chase for the championship with seven-time winner Hartland Arrowhead. In the state coaches’ association comparison of sectional performances, scored as if they had taken place in the same meet, Arrowhead has 252.5 points with 14 individual and three relays qualifiers, and Sun Prairie has 248.5 points with 18 individuals and three relays. Arrowhead will have to hold up its large sectional advantages in diving and the 200 individual medley to outscore the Cardinals. The Greenfield co-op is seeded third, followed by Hudson and Verona/Mount Horeb. Waunakee and Middleton will shoot for top-10 finishes.

Division 2: Cedarburg is a heavy favorite to win what would be its first championship, with only 13 individual and three relays qualifiers, but three top-seeded entrants. Whitefish Bay is seeded second, Madison Edgewood third and Sauk Prairie/Wisconsin Heights fourth. Monona Grove and Baraboo also will aim for top-10 finishes.

Ben Wiegand, sr., Sun Prairie: The defending state champion and state-meet recordholder in the 50 freestyle (:20.16), Wiegand was this year’s top qualifier (:20.33) by a sizable margin (.32 seconds). He’s also the top qualifier in the 100 free (:45.64) after taking second last year, and anchors the top-seeded 200 freestyle relay (1:24.28) and top-seeded 400 freestyle relay (3:09.13). His top challengers will be junior William Hayon of Sheboygan North (the 2019 champ) and senior Emilio Perez of the Greenfield co-op. Sun Prairie junior Ethan Braatz and Middleton sophomore Jack Madoch also will challenge in the 100 free.

Nick Chirafisi, so., Middleton: Chirafisi delivered the top qualifying time in the 200 freestyle (1:42.73) after taking sixth last year. He will be challenged by Greenfield co-op senior Leo Gandaria.

Jackson Lustig, sr., Greenfield co-op: The top qualifier in the 500 freestyle (4:38.02), leading a field that returns seven of last year’s top 10 finishers including James Werwie of Sun Prairie (seventh the past two years).

Lance Johnson, so., Hartland Arrowhead: Leads qualifiers in the 200 individual medley (1:52.63) and is one of three Warhawks swimming in the final heat (the top eight qualifiers).

Adam Braunschweig, sr., Hartland Arrowhead: The top qualifier in the 100 backstroke (:50.81) will be challenged by three-time state placewinner Adam Fisher of Muskego.

Jan Lanser, jr., West Bend West/East: Dominated the sectional diving field with 529 points (57 ahead of the next performer) after taking third last year.

Relays: In the 200 freestyle relay, Sun Prairie is the defending champ and seeded first (1:24.28). Last year, Wiegand turned in an anchor split of 19.11 seconds, thought to be the best in state-meet history. … Sun Prairie also is seeded first in the 400 freestyle relay (3:09.13), well ahead of defending champion Waukesha South/Catholic Memorial‘s time of 3:18.43. … Hartland Arrowhead leads qualifiers in the 200 medley relay (1:33.12), followed closely by defending champion Greenfield co-op (1:33.21).

Ben Stitgen, sr., Madison Edgewood: Stitgen can become only the third diver in WIAA history to win four state championships and the seventh competitor overall to become a four-time champ in one event. He scored 483.70 points for an easy victory last year. But this year he was the No. 2 qualifier with 437.15 points, trailing Cedarburg freshman Noah Turner (470.80).

Cameron Tejeda, jr., Monona Grove: The top qualifier in the 100 butterfly (:50.46), Tejeda also is the top returning finisher in the event after taking fifth last season (:52.34). McFarland junior Ansel Kreft and Baraboo senior Jacob Laux also are in the final heat of the butterfly. Tejeda also will challenge in the 100 backstroke after taking fifth last year (:53.20).

Sam King, so., Sauk Prairie/Wisconsin Heights: Dominated the rest of the sectional qualifiers in the 100 breaststroke with a qualifying time of :58.25 that was more than a second better than any other. He took fifth in the event last year. His top challenger will be Laux (:58.49).

Isaac Fleig, so., Cedarburg: Fleig is the only returning champion in any of the swimming events. He won the 500 freestyle last year (4:39.24) and is the second-fastest qualifier this year (4:46.15), trailing junior Jackson Hodek of Ashwaubenon (4:44.95). Monona Grove junior Caleb Jondle will challenge.

Matt Dedering, so., Cedarburg: The top qualifier in both the 50 and 100 freestyle races (:21.34 and :46.83, respectively). He was third in the 50 and second in the 100 last year. His top challengers will be Minocqua Lakeland senior Liam Hogan and Whitefish Bay senior Peter McMahon. Sauk Prairie/Wisconsin Heights junior Matthew Loy will challenge in the 100 free.

Middleton's Nick Chirafisi competes in the 400 yard freestyle relay during the WIAA Division 1 state boys swimming and diving meet at the UW Natatorium in Madison, Wis., Saturday, Feb. 22, 2020. Middleton took second place in the event with a time of 3:06.11. AMBER ARNOLD, STATE JOURNAL