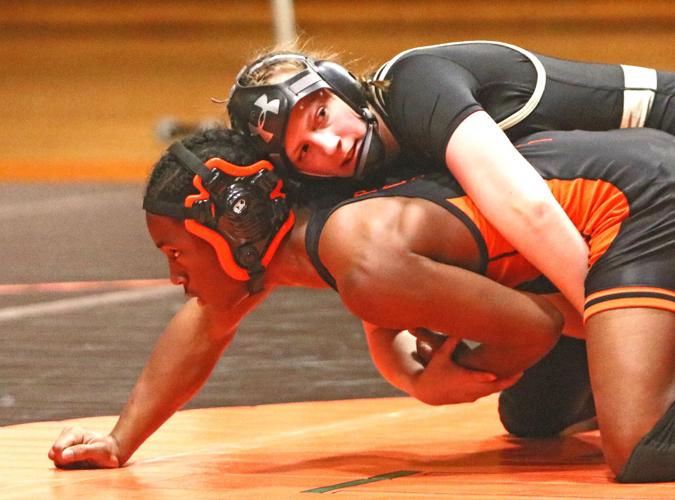 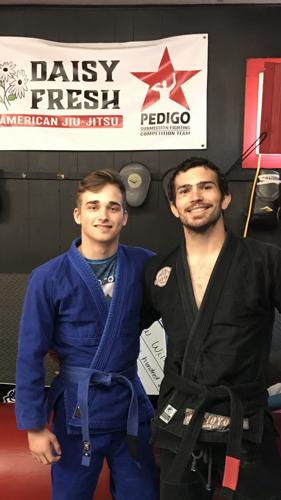 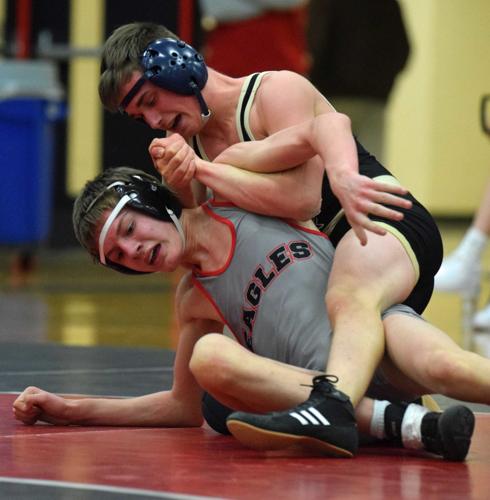 Baraboo's Connor Goorsky (top) works for a power half during a Badger North Conference dual meet against Sauk Prairie in 2020 as a freshman in the 2019-20 season, only his second year of wrestling. Goorsky is 23-4 this season as a junior at 145 pounds and a contender to advance to next month's state tournament.

Baraboo’s Connor Goorsky and Alexis Winecke have traveled different roads in their wrestling careers, the former a relative newcomer and the latter a lifer with all kinds of medals and accolades to show for her work.

As this year’s WIAA postseason creeps closer and closer, though, their compasses are pointed in the same direction.

For the first time ever, there will be a WIAA sanctioned state tournament for girls — the result of growing participation and interest among girls over the last decade or so.

And Winecke, a senior with a 17-6 combined record against boys and girls this season, is one of the favorites at 114 pounds, currently ranked fifth in that weight class according to Wisconsin Wrestling Online.

“I was always hoping by my senior year they would get one for us,” she said, “and now I’m luckily enough to have one.”

Entering the girls tournament, which will take place at the 7,500 seat La Crosse Center on Jan. 29, prohibits a girl from competing in the WIAA’s coed postseason, which begins with regionals two weeks later and ends with the state tournament Feb. 24-26 at the Kohl Center in Madison.

There have been only two girls to advance to the mixed-gender state tournament over the years, so while the best girls in the state can compete with many boys, it’s evident that when the postseason field dwindles from one weekend to the next, it becomes harder and harder for the girls to keep their seasons going.

Further making the case for a separate girls state tournament are the participation numbers: Forty-three percent of schools (143 of 336) in the state with wrestling programs had female wrestlers in 2019-20 adding up to 325 overall, according to a Wisconsin State Journal report.

Baraboo coach Joe Bavlnka considers himself lucky to have someone as good as Winecke in the first year there’s a girls state tournament — not to mention in general.

“I feel very fortunate,” the veteran coach said, “because I don’t think many coaches get that opportunity to be blessed with a girl that talented and willing to put that much time into the sport of wrestling.

“To be able to coach her for four years has just been great.”

Winecke has been wrestling since the age of five, meaning she’s no stranger to the mat.

“It’s easier for them have more strength, and I have to work for mine more,” Winecke said. “So I want to get to my (moves) and I don’t want to get stuck underneath people.”

Her attention to detail has definitely shown.

“She really adapted,” said Goorsky, a junior and a co-captain along with Winecke. “She knows that maybe she won’t have strength on some people, so she really works on her technique.

“She has the best technique of anybody in our room. She really knows what she’s doing.”

But she hasn’t completely ignored the weight room. Quite the opposite, actually.

Winecke took third at her weight class at the Wisconsin Wrestling Federation state tournament, held in March, as an eighth-grader, first as a freshman, third as a sophomore and fifth last year.

That showing last year really stuck in her craw.

“It wasn’t a performance I was super proud of,” she said, “so I knew that if I worked on my strength I could be so much better.

“I wrestled a lot over the summer and I lifted a lot, so I feel so much stronger. That along with my technique — I’ve improved so much, not having to worry about only doing certain shots that don’t get me stuck underneath. I can hit whatever I want because I’m strong enough to do some of those things that I wasn’t always able to finish.”

Big picture-wise, Bavlnka credited Winecke’s “resilience” as the reason “why she’s at where is right now,” never one to be deterred by losing to a bigger, stronger boy — only more motivated.

So is Goorsky, who’s 23-4 this year and honorable mention at 145 in the Div. 1 coed rankings by Wisconsin Wrestling Online.

He, however, has only been wrestling since eighth grade.

How has he been able to master the learning curve and make himself a candidate to qualify for state in such short order?

“He just put a tremendous amount of time in on the mat, I guess to kind of catch up to those kids who had been wrestling their whole life,” Bavlnka said. “He didn’t have that instant success as a freshman, but he kept on building and had a great sophomore year. And this year he’s even having a better year than last year, when he won a regional title. Seeing that growth from him because of all the hard work he’s put in makes him a great role model for the other kids on the team.”

Goorsky said he originally decided to go out for wrestling in order to improve in a different endeavor.

“I started wrestling because I wanted to improve my jiu-jitsu,” he said of the mixed martial arts combat sport, “and then after doing it for a little bit, I really liked it and kind of fell in love with it.”

He isn’t a quitter, that’s for sure.

“When you first start off, it’s either you’re in or you’re out — you either you have that resiliency and have that drive where you want to be the best, or you don’t,” Bavlnka said. “With Connor, he always had that in him, and when he found wrestling it made sense for him.”

'I’ll put him against anyone,' Golden Beavers coach Tim Winker said of the one-loss pins machine, who's ranked second in Wisconsin in Division 1 at 195 pounds

Randolph boys get boost from surprise source in win over 8th-ranked Oakfield; other notes from weekend

“Three years ago I never would have thought that this is where I’d be in my life,” the senior said of going from novice to a title contender and a college recruit in a little over 24 months

U.S. swimmer rescued by coach after fainting at world championships

Baraboo's Connor Goorsky (top) works for a power half during a Badger North Conference dual meet against Sauk Prairie in 2020 as a freshman in the 2019-20 season, only his second year of wrestling. Goorsky is 23-4 this season as a junior at 145 pounds and a contender to advance to next month's state tournament.