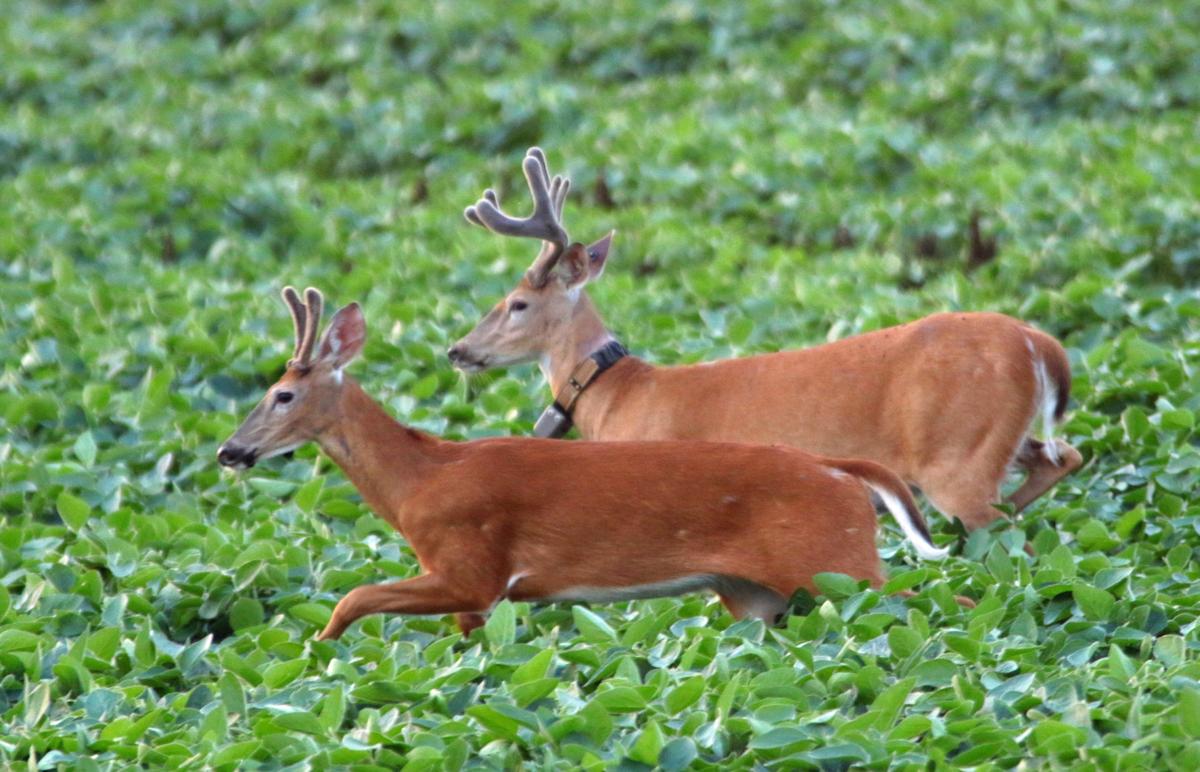 Two bucks leave a soybean field after feeding for an hour. 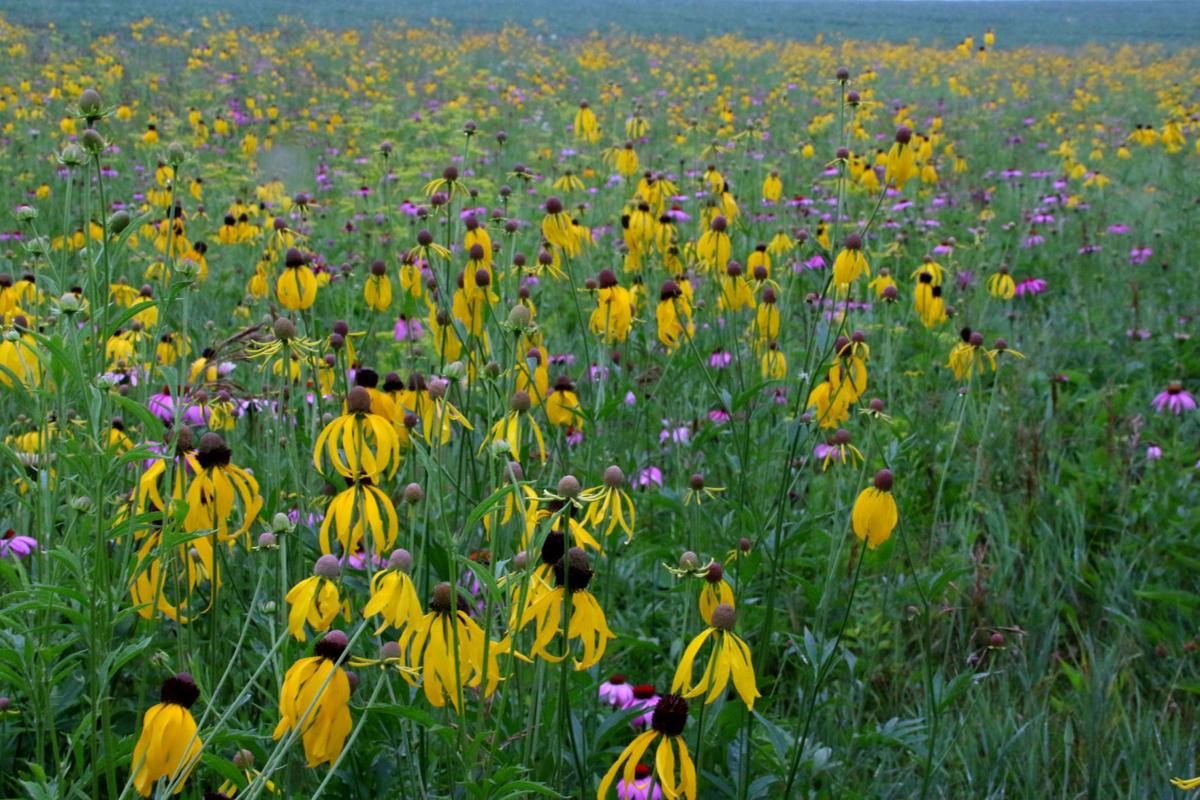 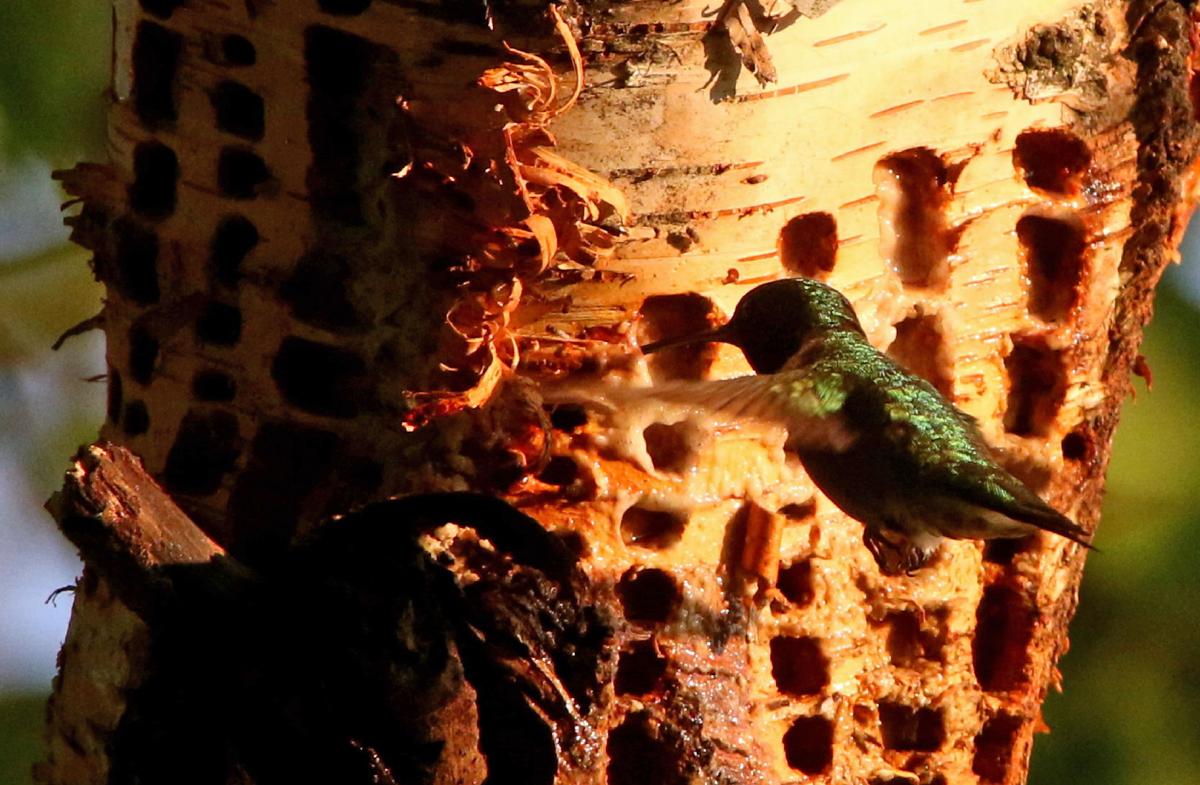 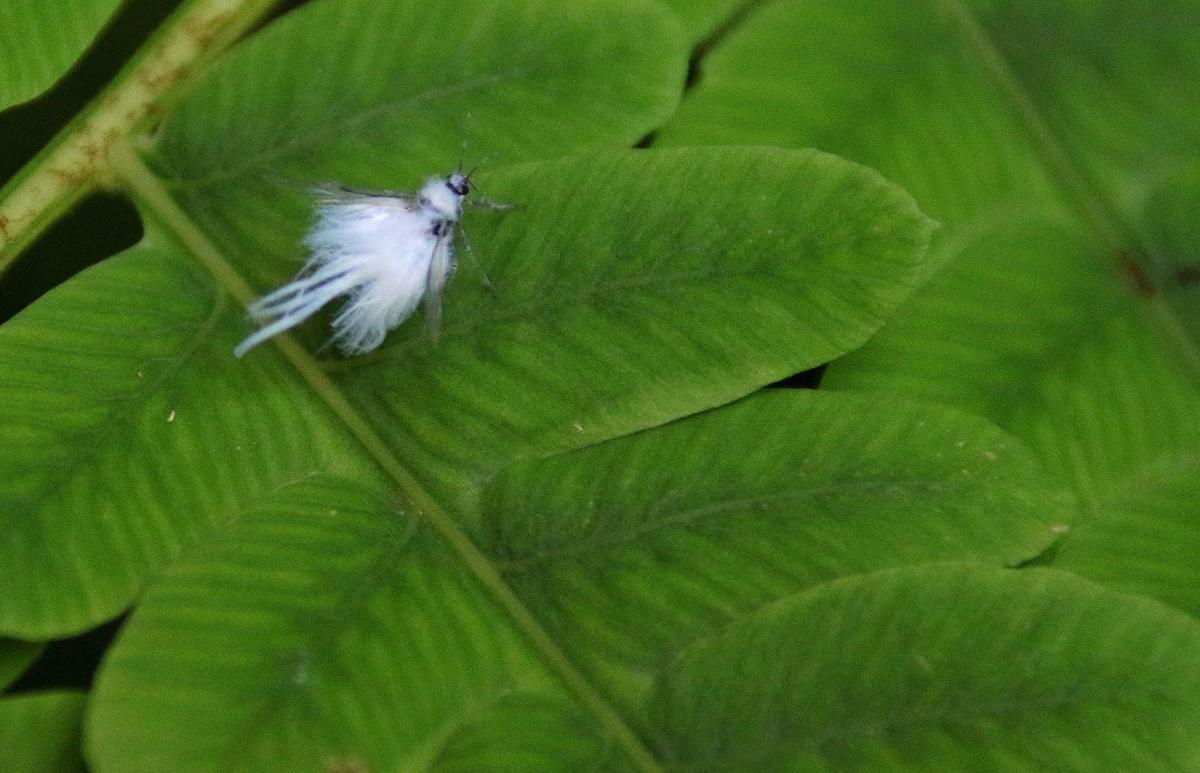 A woolly alder aphid, looking like a dab of cotton, will show if maple trees or alder shrubs are nearby. 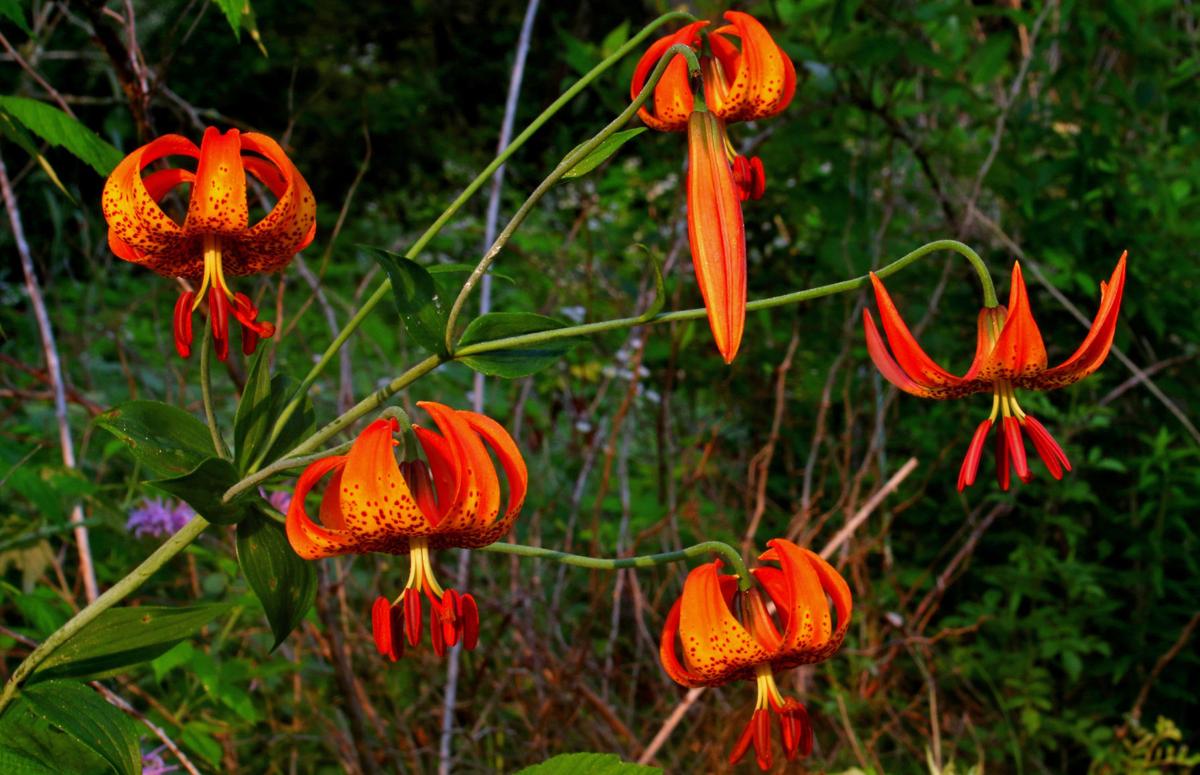 Gathering at any level of hunting, collecting, photographing, and simply observing, often begins with scouting to anticipate what and when something may happen.

The actual gathering may occur at a later time. Buds become blossoms; turn to fruit, which ripen. Blackberries are beginning to turn pinkish red. Anticipate picking in some areas in two weeks.

White-tailed deer are feeding on soybean crops, but are not likely to be found eating wild apples because there are so few on any trees.

Shagbark hickory nut gathering will be fair to good based on the developing hard mast visible when standing under a tree looking up using binoculars.

Fall turkey hunting is a ways off, but tracks of some gobblers’, are showing in old gravel driveways.

Ginseng fruits are beginning to put on red, so now might be a time to scan a likely forest area. No ripening fruits, no point returning after September 1 with a screwdriver and license and permission to dig roots.

Trail cameras, an outdoors persons’ surveillance device, arw on stand 24 hours a day recording bobcats hunting, ground squirrels eating zucchini fruits in a garden, or a poacher out prior to September 1 with a screwdriver.

Two recent camera experiences make the point. Several zucchini hills were developing from vines with both pollen and fruit flowers. As soon as the fruit flowers faded, because pollinators had flown in, the fruit grew to sausage size but was gnawed upon by a small mammal. A trail camera, this one sitting on the ground, “filmed” a ground squirrel who selectively left pole beans, ripening tomatoes and surfaced potatoes but devoured the zucchini’s fruit.

Doug Williams, at Portage’s DW Sports Center has trail cameras he uses for deer hunting. “I use some for surveillance on buildings and some stay in the woods year-round,” he said. “I can see if someone has been around.”

My grandson, who lives in Georgia, placed a few trail cameras on Iowa County land. One camera, which he taped into remotely, revealed a bobcat, several coyotes, numerous raccoons, twin whitetails, two bucks, and a few people walking or riding past.

Mike Burns, the DNR field warden in Lafayette and Iowa counties has never seen as many raccoons in these areas.

“UTV and ATV traffic has been heavy on roadways and trails where legal, and channel catfish catching on worms and stink bait has been good on Yellowstone Lake,” he said.

“The deer with their red coats are neat during late afternoons feeding in soybean fields. Most does have fawns, many twins, too.”

Don Martin, at Martin’s in Monroe, has been ordering cases of ammunition and getting a few boxes, but not selling a lot of fishing bait with the unsettled weather.

“Some larger stores are rationing ammunition with gals and guys purchasing, then changing shirts, caps and sunglasses and returning to the store to beat the system,” he said.

“This is the time people should be out enjoying nature, wild flowers and all the small animals out and about,” Williams suggested.

Crop plants, including soybeans and corn, are flowering. Shorter day-length varieties, including sweetcorn, have hit the farmer’s markets. Yes, the two flower types, pollen and fruit flowers (usually called “male” and “female” flowers) are on the same plant in the form of tassels and ears.

Bright orange Michigan lilies are blooming roadside and stream bank areas. Watch for swallowtail and an occasional hummingbird to visit these beauties.

Common names, Turk’s cap and tiger lily, are better reserved for other species that are not native to Wisconsin, often planted.

Prairies continue to be alive with yellow coneflower and bergamot blooms.

If maple trees or alder shrubs are nearby, it’s likely woolly alder aphids are, too. The teeny twists of cottony material are winged aphids carrying sticky material they secreted from their abdomens to protect from predatory insects.

Later in autumn, masses of these aphids will cluster on alders, with their tiny white streamers suggesting the mass is one individual instead of dozens of aphids drawing sap from the plant.

Garden beans are ready, as is sweet corn and cherry tomatoes, onions, cucumbers and zucchini and potatoes. Squirrels can to hunted by landowners year round.

Detroit Lions embrace being underdogs in 2021

Detroit Lions embrace being underdogs in 2021

What will it take for the Giants to take down the Dodgers?

What will it take for the Giants to take down the Dodgers?

Two bucks leave a soybean field after feeding for an hour.

A woolly alder aphid, looking like a dab of cotton, will show if maple trees or alder shrubs are nearby.