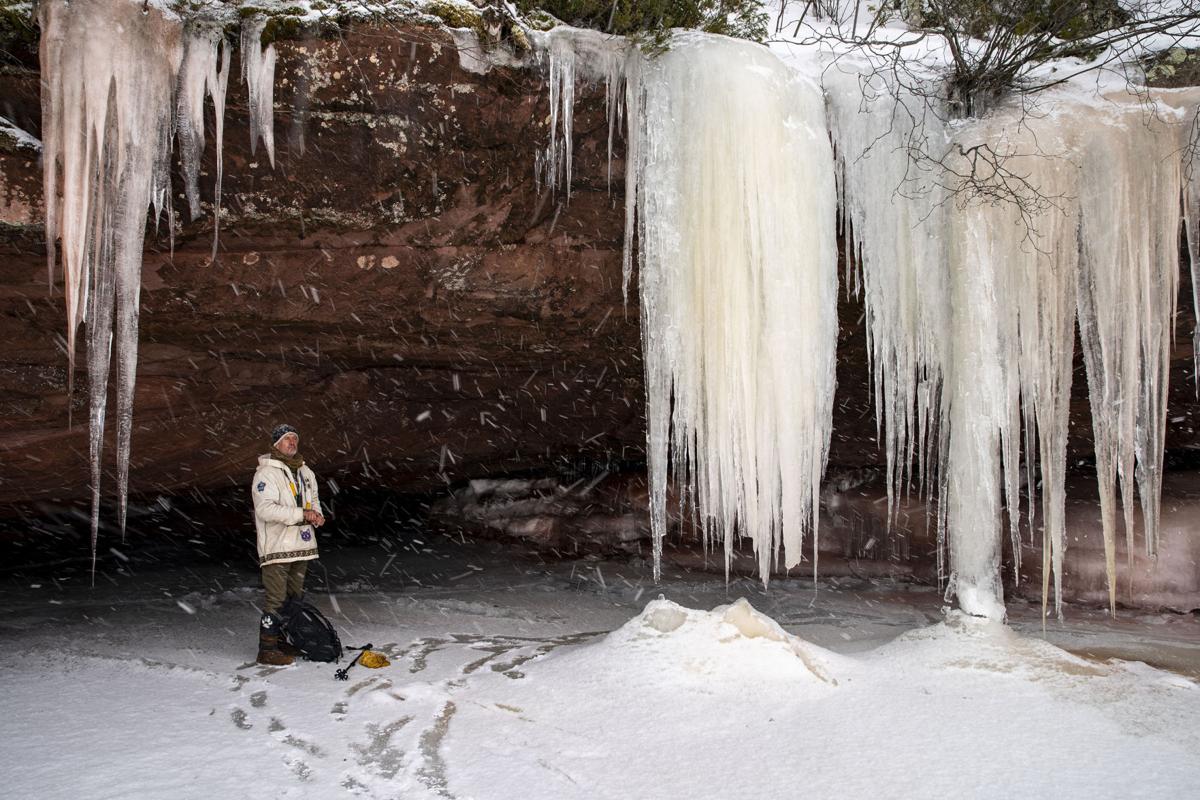 Jon Michaels, one of the two guides for the Red Cliff Point guided ice cave tour, takes in the view of falling snow from inside a cave nicknamed "root beer float" on Wednesday, Feb. 26, 2020. (Alex Kormann/Minneapolis Star Tribune/TNS) 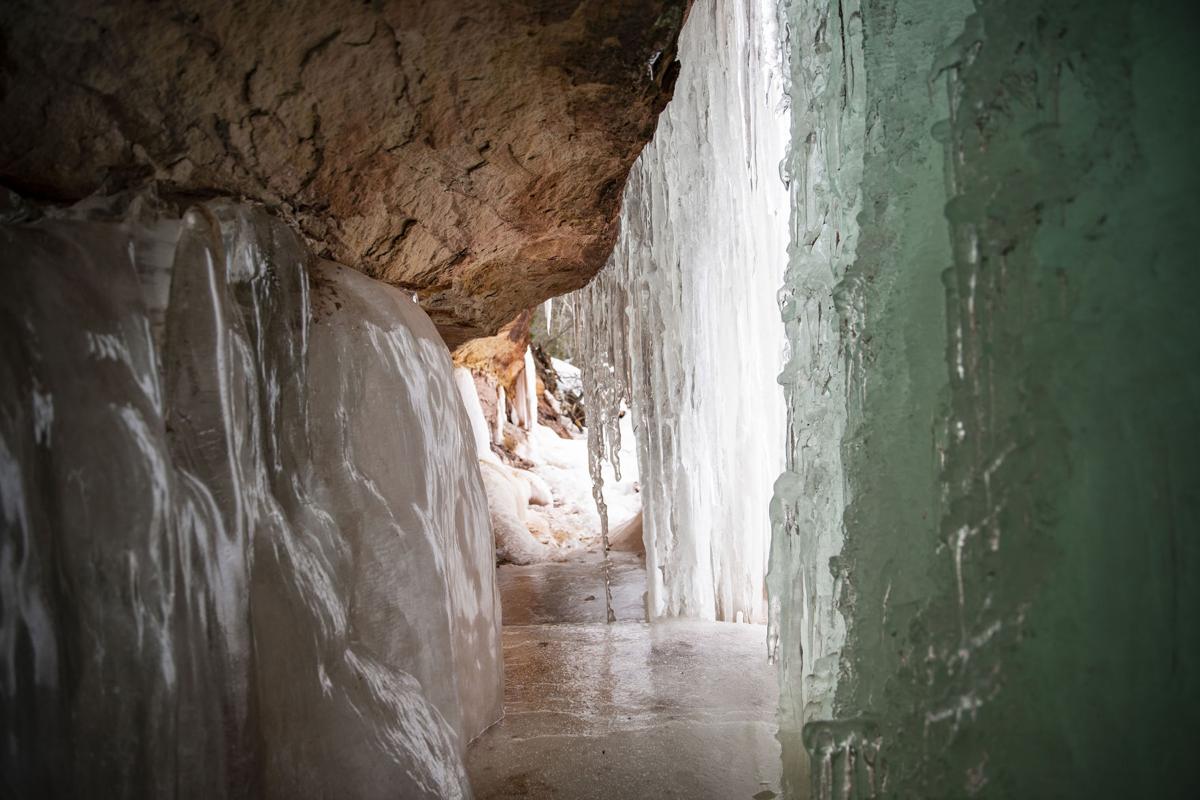 A cave and ice formation nicknamed "big blue" is considered the most impressive of the formations on Red Cliff Point. (Alex Kormann/Minneapolis Star Tribune/TNS) 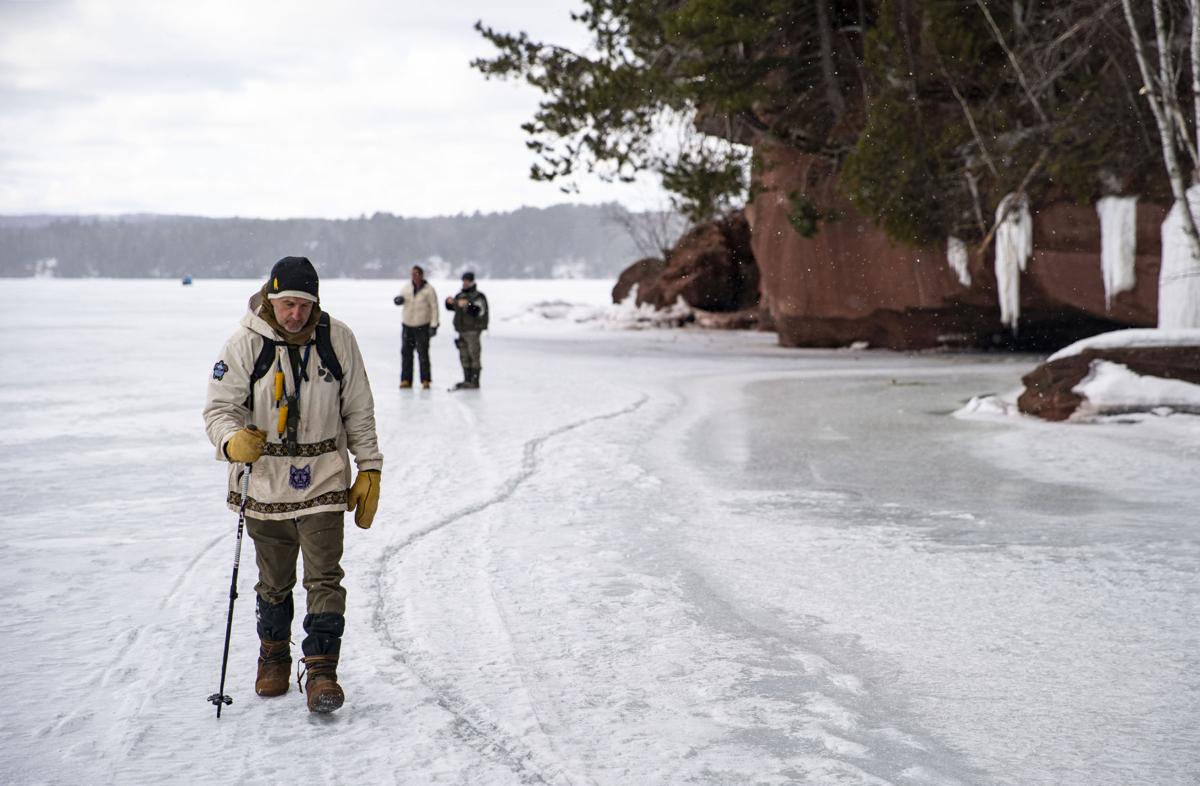 Left, Jon Michels, one of the two guides for the Red Cliff Point guided ice cave tour, walks along the ice while David Duffy and the other guide, Travis Barningham, take in the view on Lake Superior on Wednesday, Feb. 26, 2020. (Alex Kormann/Minneapolis Star Tribune/TNS) 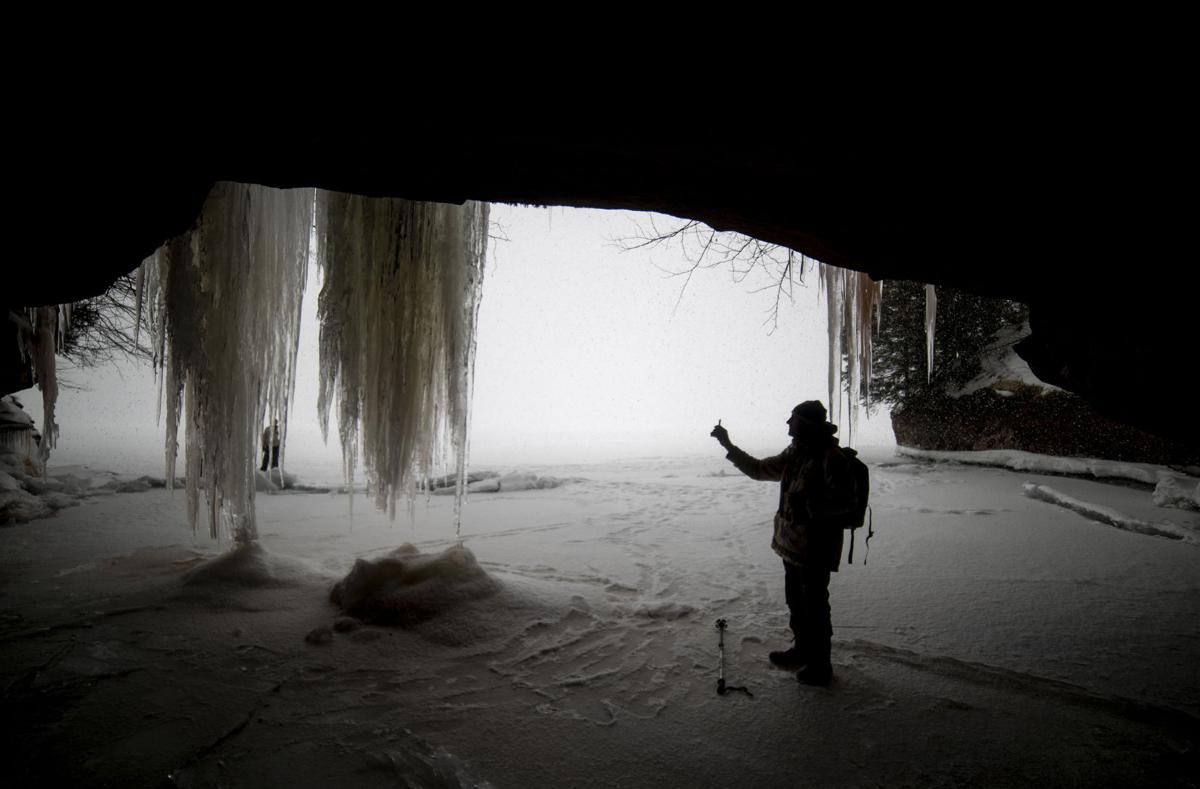 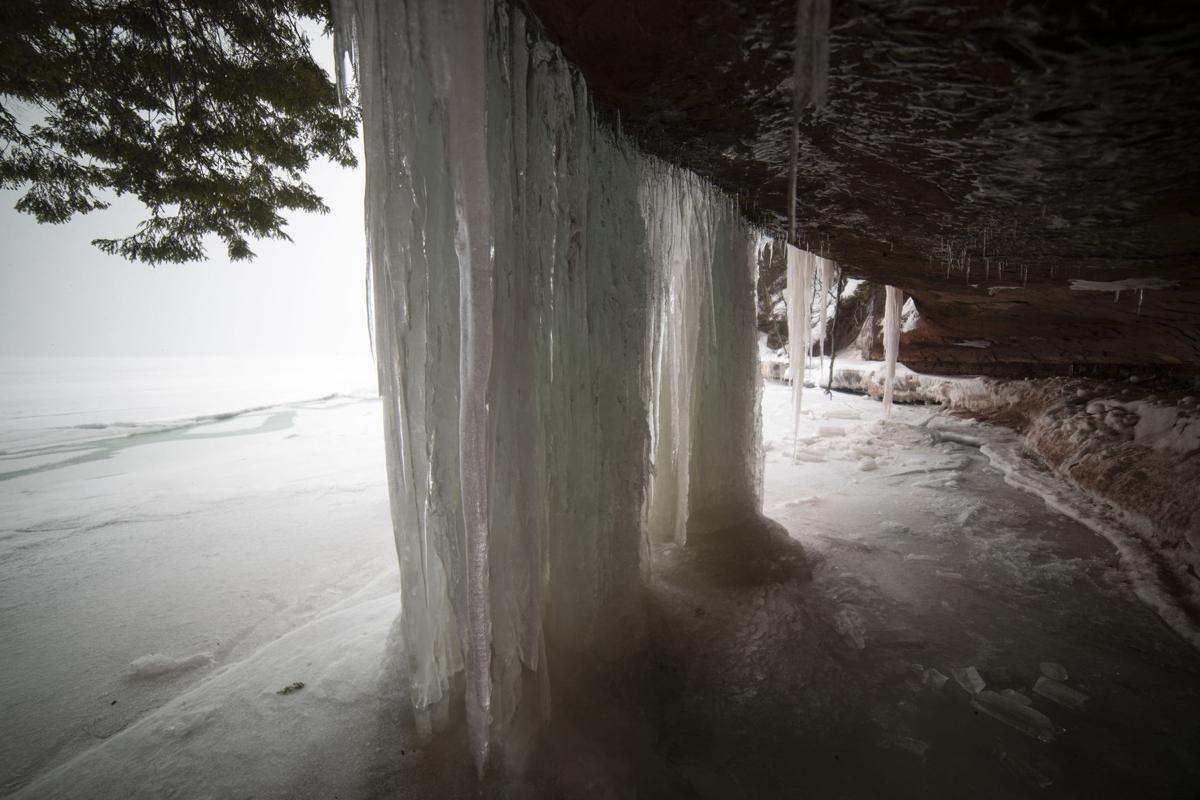 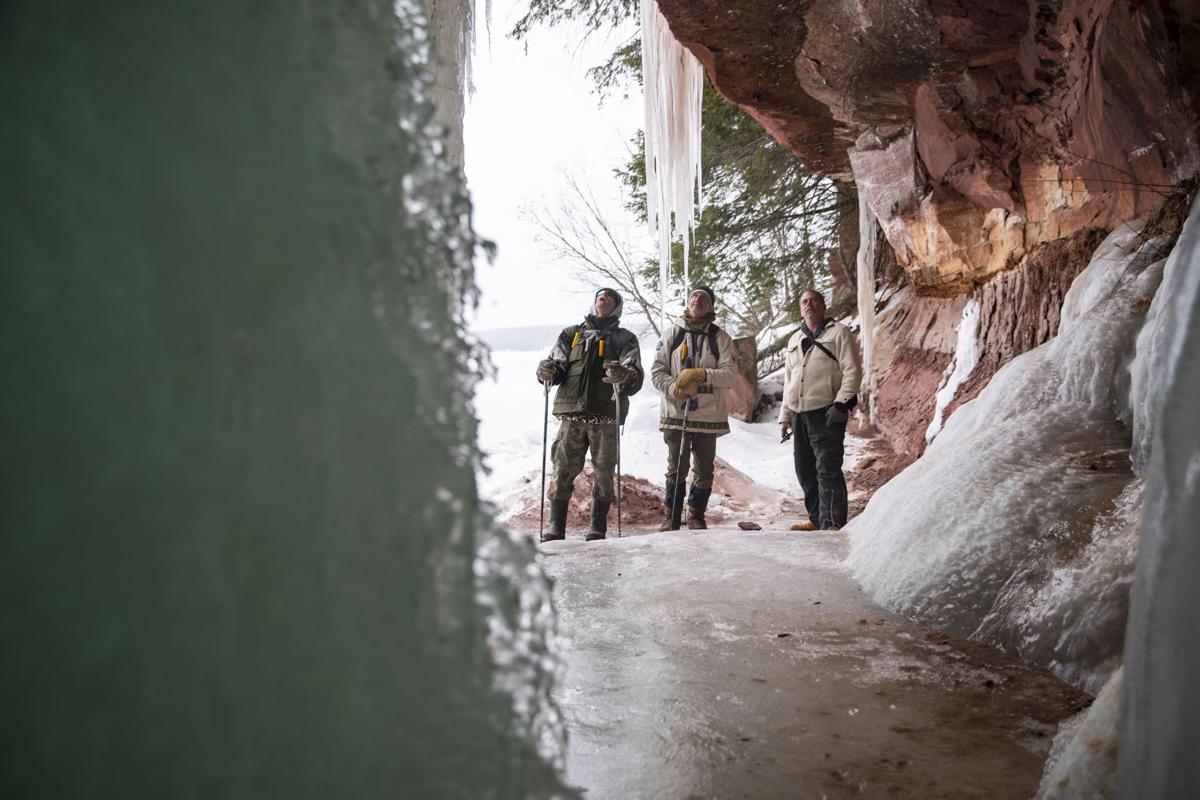 Then he noted something less obvious than the natural spectacle he had come to see.

"It's so quiet out here," he said as he led a hiking tour of what some local marketers are calling "the other" ice caves.

The plentiful, dramatic formations at Apostle Islands National Lakeshore that lured 138,000 ice cave trekkers to northern Wisconsin in 2014 haven't been accessible in recent years because of unsafe lake ice conditions. But intrepid trekkers can often still get an ice cave fix - sans crowds - at some smaller, more dispersed frozen sprays and chandelierlike formations dotting the shoreline in safer areas, including a portion of the shore near the Red Cliff Reservation some 15 miles away.

The formations are fewer and less striking than those that appeared in 2014, but a walk to see them also offers a bit of peace and solitude on the world's largest freshwater lake.

The ice formations begin when lake waves splash and freeze onto the ribbons of sandstone rock along the shore in early winter. They blossom when groundwater seeps from the rock, forming icicles, crystals, curtains and columns of ice in intriguing shapes and colors, with washed sand making some look pink.

Michels works with Travis Barningham, who has a tribal permit to access the lake via Red Cliff Reservation, and this year they started leading guided three-hour tours for $50 near Bayfield. Through their Wolf Track Guides company, they will take up to eight people at a time, forging ahead to try to find the least slippery and safest paths to several formations, including one they have named "Big Blue" for its size and aqua hue and a small version down the shore they call "Baby Blue."

There's also one they've dubbed "Chandelier" with stalactitelike ice hanging from a cave ceiling. Another is called "Pillar," and still another is named "Root Beer Float," with brown swirl patterns.

Michels, a former geologist, tells his tour guests a bit about how the shoreline formed while offering up some history about the Red Cliff Band of Lake Superior Chippewa in the area.

While the formations aren't as spectacular as the ice caves at the National Lakeshore, Michels said, people don't walk away disappointed after getting to see a few up close.

"The Red Cliff Caves are not comparable in size and extent, but there is incredible beauty and scenery found on our tour," Michels said. "And there is a compelling story to hear."

There is also the peace and adventure that comes with having the shoreline almost all to themselves.

Jon Michaels, one of the two guides for the Red Cliff Point guided ice cave tour, takes in the view of falling snow from inside a cave nicknamed "root beer float" on Wednesday, Feb. 26, 2020. (Alex Kormann/Minneapolis Star Tribune/TNS)

A cave and ice formation nicknamed "big blue" is considered the most impressive of the formations on Red Cliff Point. (Alex Kormann/Minneapolis Star Tribune/TNS)

Left, Jon Michels, one of the two guides for the Red Cliff Point guided ice cave tour, walks along the ice while David Duffy and the other guide, Travis Barningham, take in the view on Lake Superior on Wednesday, Feb. 26, 2020. (Alex Kormann/Minneapolis Star Tribune/TNS)