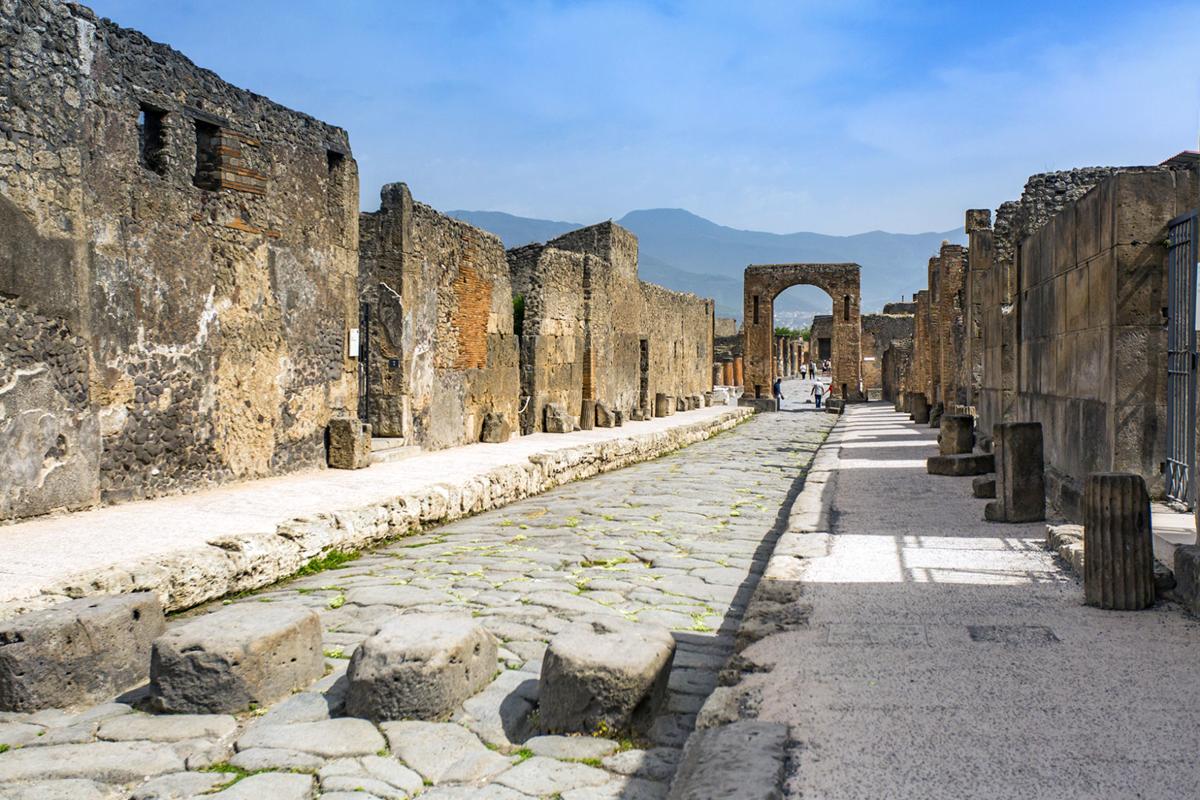 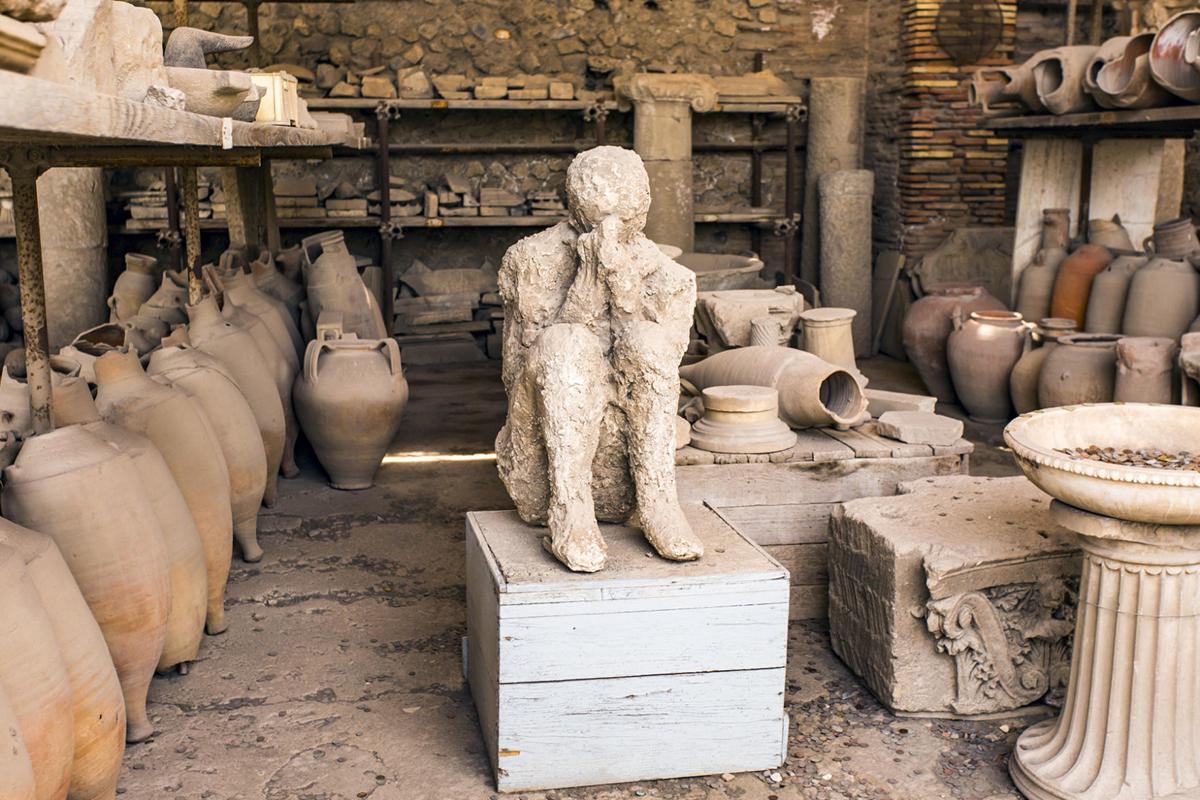 Pompeii's most compelling scenes are its residents, whose plaster-cast remains are amazingly detailed, revealing clothing features and facial expressions. 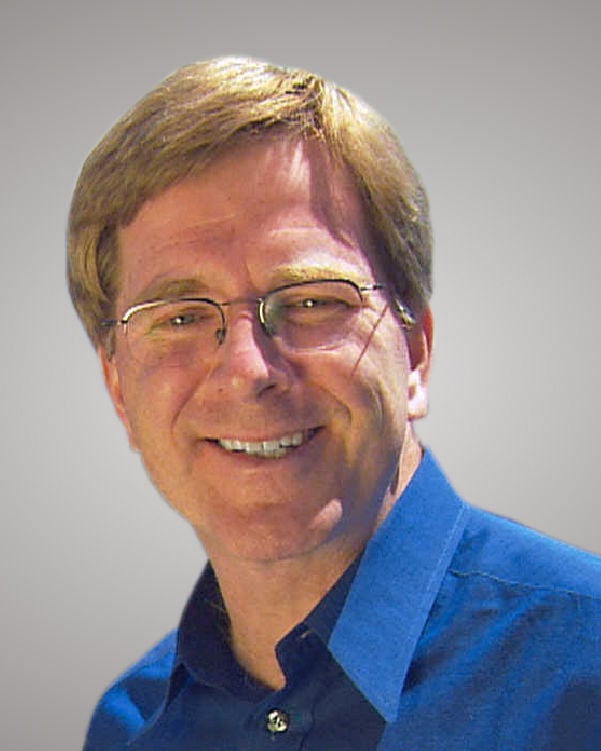 I love exploring the world of ancient Rome, with its grand architecture, fascinating culture, and stories of larger-than-life leaders. But since many of the 2,000-year-old empire’s landmarks are reduced to ruins, it can be hard to make sense of the stones and rubble left behind.

So, to get a clearer picture of what everyday life in ancient Rome was really like, I visit the well-preserved (and unlucky) city of Pompeii. Located just south of Naples, Pompeii was founded in 600 BC and eventually grew from its Greek and Etruscan roots into a bustling Roman trading city and port.

Neither rich nor poor, Pompeii was a typical middle-class town. To serve its 20,000 residents, the city boasted more than 40 bakeries, 130 bars, and plenty of public baths. Being a port, it also had brothels, restaurants, and entertainment venues that catered to sailors from all over the Roman world — many of whom didn't speak a lick of Latin. Most of Pompeii’s buildings were covered in brilliant white ground-marble stucco, making it an impressive town. And from its richly decorated forum, people had a postcard-perfect view of the looming volcano, Mount Vesuvius.

Then on August 24, AD 79, everything changed. At about 1 p.m., Vesuvius sent a mushroom cloud of ash, dust, and rocks 12 miles into the sky. It spewed for 18 hours straight, as winds blew the cloud south toward the city. The white-gray ash settled like a heavy snow on Pompeii, its weight eventually collapsing roofs and floors (but leaving walls standing). Though most of Pompeii's residents fled, 2,000 stayed behind. A bad move, because the next morning a red-hot pyroclastic flow struck Pompeii, dealing a fatal blow to those who had remained, and burying the city under 30 feet of volcanic ash.

After the eruption, people from nearby towns tried in vain to find the buried city. Because Pompeii was a major port, people naturally searched for it near the sea. But the eruption had filled in the harbor and pushed the coastline out, meaning Pompeii now lay inland — and its location would remain a mystery for more than 1,500 years.

In 1599, Pompeii was accidentally rediscovered during construction of a canal. Serious excavations began in 1748 and are still ongoing, making Pompeii the longest continually excavated site in the world.

Ironically, the ash that had destroyed Pompeii also ensured its preservation, leaving it frozen in time. As a result, its ruins offer the best look anywhere at life in an ancient Roman town, with its gridded street plan, villas and homes, commercial buildings, public baths, and colorful frescoes left remarkably intact.

Pompeii also exhibits small signs of everyday life. In the town's many "fast food" joints, holes in the counter show where containers once held food for hungry customers to grab as a quick meal. Public drinking fountains still stand along the city's main streets, many of which would have been lined with stalls and jammed with customers from sunup to sundown. And if you look closely at some of the walls, bright red graffiti pops out exclaiming that Julius was here.

Of course, the most compelling scenes in Pompeii are provided by its (permanent) residents. While excavating, modern archaeologists detected hollow spaces in the volcanic debris that were created when victims' bodies decomposed. By gently filling in the holes with plaster, the archaeologists created molds of the Pompeiians who were caught in the disaster. The plaster casts show remarkable details — the folds of togas, the straps of sandals, the pained expressions on victims' faces. Signs of animals have also been found, including a saddled-up horse that appears ready to carry its master to safety.

Excavations at Pompeii experienced a renaissance in 2018, when new artifacts and skeletons were discovered in a section of the city yet to be fully unearthed. With fresh secrets sure to be revealed over time, evocative Pompeii will be worth visiting again and again.

Which Airlines Have Handled COVID-19 the Best?

Airlines scrambled to adjust to disappearing revenue earlier this year, and they are now scrambling to implement health policies to entice passengers back as more people cautiously take to the…

Rangers at California's Joshua Tree National Park have shut down the popular Jumbo Rocks Campground "due to aggressive honey bee activity." "There were a couple of vehicles with a lot of bees in them. And campsites. Visitors were very uncomfortable," said Joshua Tree Superintendent David Smith. He said no stings were reported, the bees are "standard honey bees" and the park's many other ...

After months of hunkering down, travelers are starting to think about summer escapes — but ones that are more budget friendly and health conscious.

The main type of travel during the re-opening period will be "visiting friends and relatives," or VFR, in industry jargon, one of the three big travel groups the industry uses. (The others are leisure travel and business travel, in case you cared.) So say the industry "experts." Although I don't know when the country will be truly "re-opened," even if it isn't yet, many of you will be traveling with kids or arranging for kids to travel fairly soon. Here's a checklist of arrangements you need to consider.

Which Airline Has the Most Valuable Elite Status Program?

Champagne. Extra legroom. Human decency. These are the perks that come from airline elite status. Yet whether you’ve enjoyed it in the past or are pursuing it for the first…

Ed Perkins on Travel: Air travel: Where do we go from here?

Anybody who says, in mid-2020, they have a firm fix on the future of air travel is either trying to con you into something or on the hard stuff. In all the too-many-to-count years I've been doing this, I've never seen a less predictable air travel marketplace. Even so, you can see a few important omens for the future that can help you plan travel — or lack of it — for the next year or so.

A pandemic, recession and impending election doesn’t mean the magic of the season has to disappear. Here’s how to reclaim it.

This airline is requiring a full face shield to fly

As part of Qatar Airways' updated health and safety measures, the airline will now require passengers to wear a face shield in addition to a mask throughout their flight. The carrier will provide the complimentary face shields to all passengers in two standard sizes, one for adults and the other for children. The shields will be distributed at boarding gates at all destinations served by the ...

Go away with ... Doug Clifford

It's not often that an artist releases a new album that's actually decades old. But that's exactly what Doug Clifford did. Best known for his work with Creedence Clearwater Revival, his latest CD is "Magic Window" – songs he wrote and recorded in the mid-’80s. Splitting his time between Reno, Nevada, and Scottsdale, Arizona, Clifford said the vacations he has enjoyed in his adulthood (pre-coronavirus pandemic) are much better than his childhood road trips. "Any trip I took as a kid, I hated it," he said. "My dad smoked cigarettes and kept the windows rolled up." Fans may stay in touch with him on Facebook (https://www.facebook.com/DougCosmoClifford/), Twitter (@DougCosmo) or his website, www.dougcosmoclifford.com.

'Dirty Dancing' lake filling up 12 years after it dried up

National Parks Are Reopening, So Here Are Some Tips to Keep in Mind!

National Parks Are Reopening, So Here Are Some Tips to Keep in Mind!

How To Road Trip Safely During Social Distancing

How To Road Trip Safely During Social Distancing

Pompeii's most compelling scenes are its residents, whose plaster-cast remains are amazingly detailed, revealing clothing features and facial expressions.