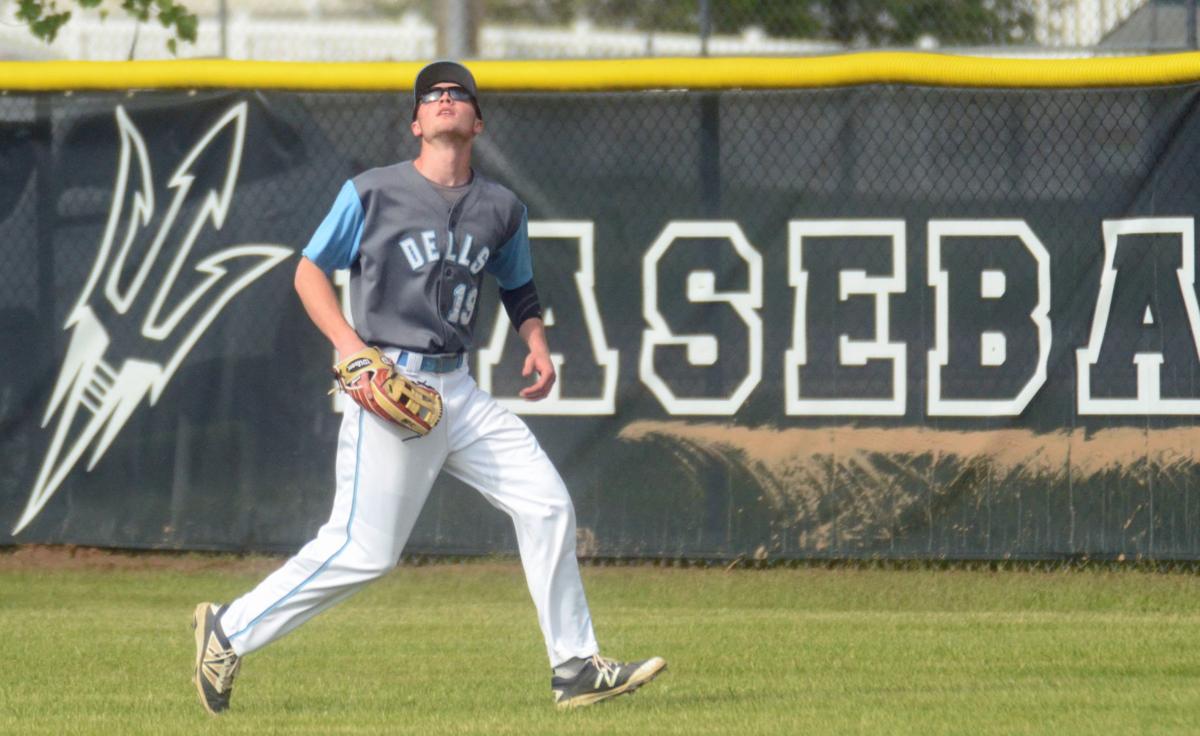 Wisconsin Dells senior outfielder Dylan Nevar tracks a flyball during a Division 2 regional championship game in Adams-Friendship last season. Nevar, the South Central Conference's two-time reigning Player of the Year, and the Chiefs looked poised for major success in 2020 before the COVID-19 pandemic shut down the season. 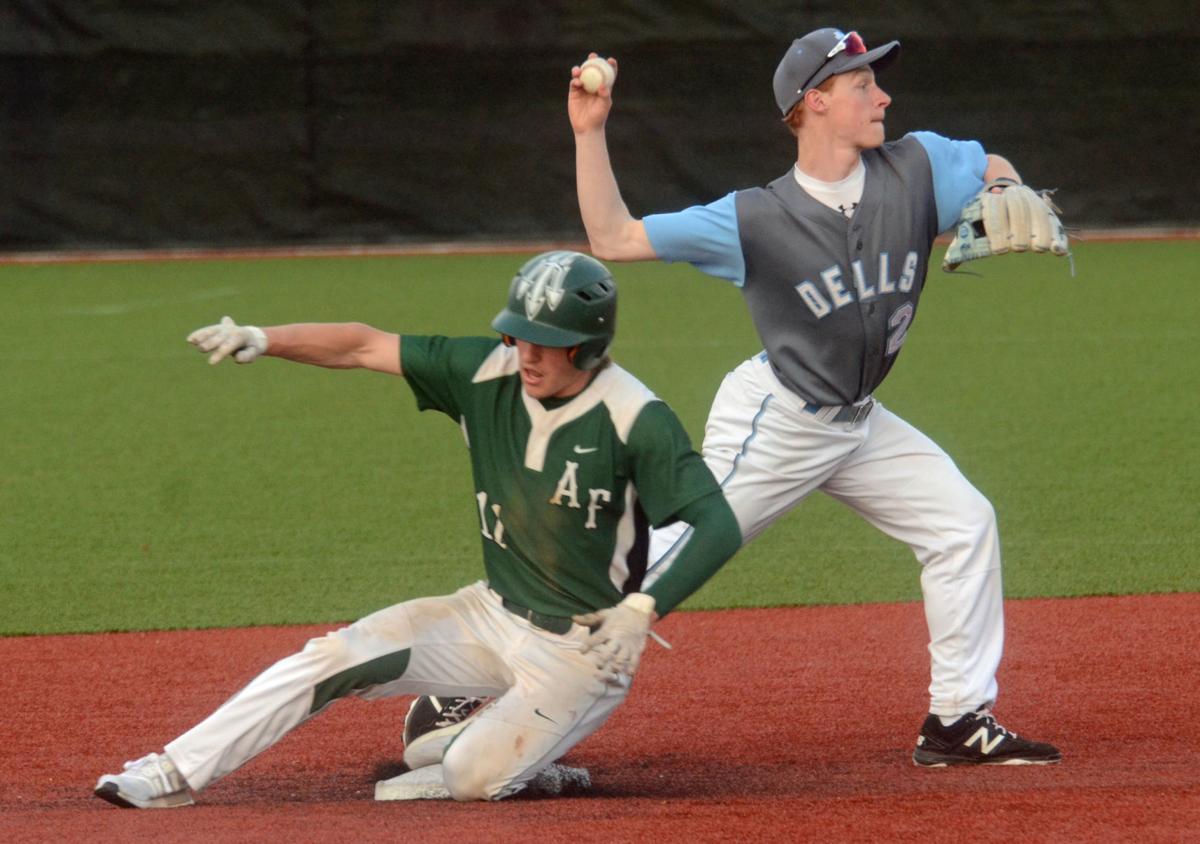 Wisconsin Dells senior second baseman Brennen Tofson tries to turn a doubleplay during a South Central Conference game against Adams-Friendship last season. Tofson is one of seven seniors on this year's team and helped the Chiefs to a 15-7 record last year and second straight sectional appearance.

No one will fully know just what was in store for the Chiefs in 2020 however, after the COVID-19 pandemic forced the WIAA to officially cancel the spring campaign. With just four losses to graduation, Wisconsin Dells carried plenty of experience into this spring, including four returning All-South Central Conference picks among seven returning starters.

That mix of experience and skill had the Chiefs eyeing its third league title and dreaming of the program’s first state appearance since 1986. The fact that the Chiefs’ once hopeful season was stopped before the first pitch was thrown has made it all the more disappointing for coach Mike Michalsky and his team.

“I think our reaction was, honestly, maybe a little worse than others because we knew we had a really good team, maybe our strongest team we’ve ever had talent-wise, coming through,” Michalsky said.

“We were a young team last year, and only losing two senior starters, it felt like we would have been ready to go with a lot more experience,” senior Dylan Nevar added.

Among the returnees for the Chiefs, who finished 15-7 last season, was a talented seven-man senior class, led by a foursome of veteran starters. Nevar, the South Central Conference’s reigning two-time Player of the Year, was entering his fourth varsity season, while seniors Brennen Tofson and Marty Koenig, fellow returning All-SCC selections, and Ben Koenig were headed for their third varsity campaign.

Other seniors were; Mikhail Stafford, Luke Hilliard and Jordon Kosterman. Despite being no stranger to the varsity lineup, Michalsky believed Ben Koenig was due for a major final season.

“He came in and pitched some big games for us last year and stepped up that way, but he’s always been a kid that’s made huge defensive plays in pressure situations,” Michalsky said, noting Koenig’s walk-off RBI single in a 3-2 win in 8 innings in a Div. 2 sectional semifinal over Gale-Ettrick-Trempealeau in 2018.

“I thought it would be a breakout year for him, and I feel bad for the seniors.”

Michalsky also expected even more success from Tofson and Marty Koenig, and for Stafford, Hilliard and Kosterman to contend for starting roles along with juniors Will Van Dinter and Jace Knetter, as well as, sophomore Brooks Slack. Another area of high expectation for Michalsky was the Chiefs’ pitching staff.

Nevar was again the ace of the Wisconsin Dells staff last season, amassing an 8-1 record with a 1.28 earned run average. The Western Michigan recruit racked up 84 strikeouts to just 30 walks and 32 hits in 60 innings pitched.

Nevar was sure to be the cornerstone of the Chiefs rotation this season, but unlike last year, Michalsky said he and coaching staff wouldn’t be searching to find out their depth at the start of the season. Sophomore Will Michalsky looked to be a solid 1-2 punch alongside Nevar, while Tofson and Ben Koenig were also slated to be key contributors on the bump.

“We felt like we had a strong No. 1 and No. 2, and we had a No. 3 pitcher too so we weren’t kind of scrapping like we were at the beginning of 2019 trying to find pitching,” Mike Michalsky said.

The Chiefs weren’t lacking any firepower at the plate either. Nevar had .486 batting average last season and led Wisconsin Dells in runs (25), triples (5) and home runs (2). He also finished second in RBIs with 21, doubles with eight and added 11 stolen bases.

Not to be outdone, Tofson hit .266 with a .405 on base percentage and led the Chiefs with 15 walks while adding 10 RBIs and a homer. Sophomore Jacob Rockwell hit .343 with 18 runs and 18 RBIs apiece last season to earn first-team all-SCC honors, while Marty Koenig hit .250 with 14 runs and seven RBIs.

“Being that some of the younger kids were a year older, we felt our line-up was going to be pretty tough to get through this year,” Tofson said.

With lots of potency at the plate and in the field, the list of goals for the Chiefs entering this season was pretty short. Wisconsin Dells appeared primed to capture a third straight SCC title and would likely contend for a third consecutive regional title.

After that, the program’s first sectional title in 34 years was on the docket, and potentially a state title.

“The last two years we came up short in the sectional and this year we planned on finally breaking through to the state tournament,” Nevar said.

Aiding in those ambitions was a No. 10 preseason ranking in Div. 2 by the Wisconsin Baseball Coaches Association, which according to Mike Michalsky, could have been higher in previous seasons.

“Now we have Catholic Memorial in at No. 1, Pewaukee at No. 3 and some other area schools like Reedsburg and Portage that, traditionally, haven’t been Div. 2 schools,” he said. “So five years ago, the No. 10 ranking would have been like a No. 4 or 5 ranking, so we knew we were good; we knew we were going to be good by the end of the year, just a matter of how good.”

With those aspirations out the window, the Chiefs are now hoping to take part in the WIAA’s expanded period of 30 contact days at the start of July. Being able to take advantage of those contact days, given Gov. Evers’ Safer-at-Home order doesn’t get extended and allows for larger groups to gather, wold be huge for Wisconsin Dells on multiple fronts.

For Mike Michalsky, giving the Chiefs seniors, especially those whose main focus is baseball, a chance to have some closure to their careers is a major driving force. On top of that, it will give a young program, which includes 15 freshmen and nine sophomores, a chance to get some needed practice.

“It gives those kids a chance to play a few games, get some practices in and you really would get to play for the love of the game because there’s no pressure. You just play to be together and get a little better,” Michalsky said.

“I’m just hoping we can get back out there, if not with some games, helping the underclassmen out and giving them some tips,” Tofson said.

In the meantime, the Chiefs are staying in touch and staying in shape. Tofson, who plans to attend UW-Whitewater and may pursue playing on the Warhawks club team, said he throws every day and tries to get in the batting cage “a few times a week,” and the team has had multiple video calls on Zoom to keep connected.

Nevar is doing the same as he gets ready ahead of his freshman season at Western Michigan. The pitcher will transition to the outfield with the Broncos, who beat out six other courtesans looking to add the skilled lefty.

The coaches’ development plan and school’s academics were the major draws for Nevar, who wants to major in engineering. Until then however, he’s hoping to spend some more time with his Dells teammates.

“I’m fortunate to be able to go to the next level and play, but right now I’d give up anything to play just a couple more games of high school baseball, and I think those other guys would say the same thing,” he said.

Whether or not this year’s team will get to spend those final moments together is yet to be seen, but one thing is clear, the current pandemic will only make the Chiefs stronger.

“The other thing is people need to adapt. Yeah it’s hard, we had a good team and we don’t get to play baseball, but what are we going to do from here. You can’t sit back and cry in your milk over it, you have to figure out the next step and move forward with the kids,” Mike Michalsky said.

It’s definitely not ideal, but you have to be able to roll with the punches and whatever life throws at you,” Tofson added.

PREP BOYS SOCCER: Mauston hoping to put pieces together in 2020

For more than half a decade, a new high school for the School District of Wisconsin Dells has been on the minds of the community and district …

Since joining the SWAL/SWC Conference last season, the Wisconsin Dells girls golf team has asserted itself as the top team in the league.

Wisconsin Dells senior outfielder Dylan Nevar tracks a flyball during a Division 2 regional championship game in Adams-Friendship last season. Nevar, the South Central Conference's two-time reigning Player of the Year, and the Chiefs looked poised for major success in 2020 before the COVID-19 pandemic shut down the season.

Wisconsin Dells senior second baseman Brennen Tofson tries to turn a doubleplay during a South Central Conference game against Adams-Friendship last season. Tofson is one of seven seniors on this year's team and helped the Chiefs to a 15-7 record last year and second straight sectional appearance.