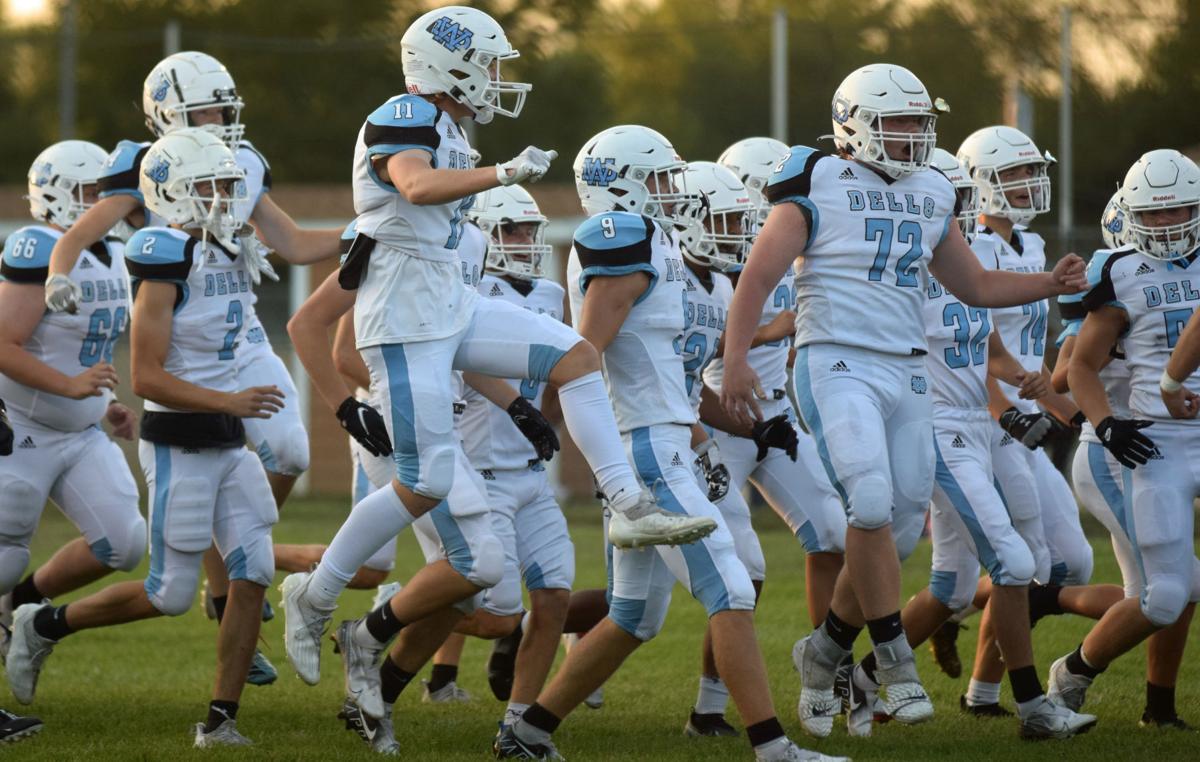 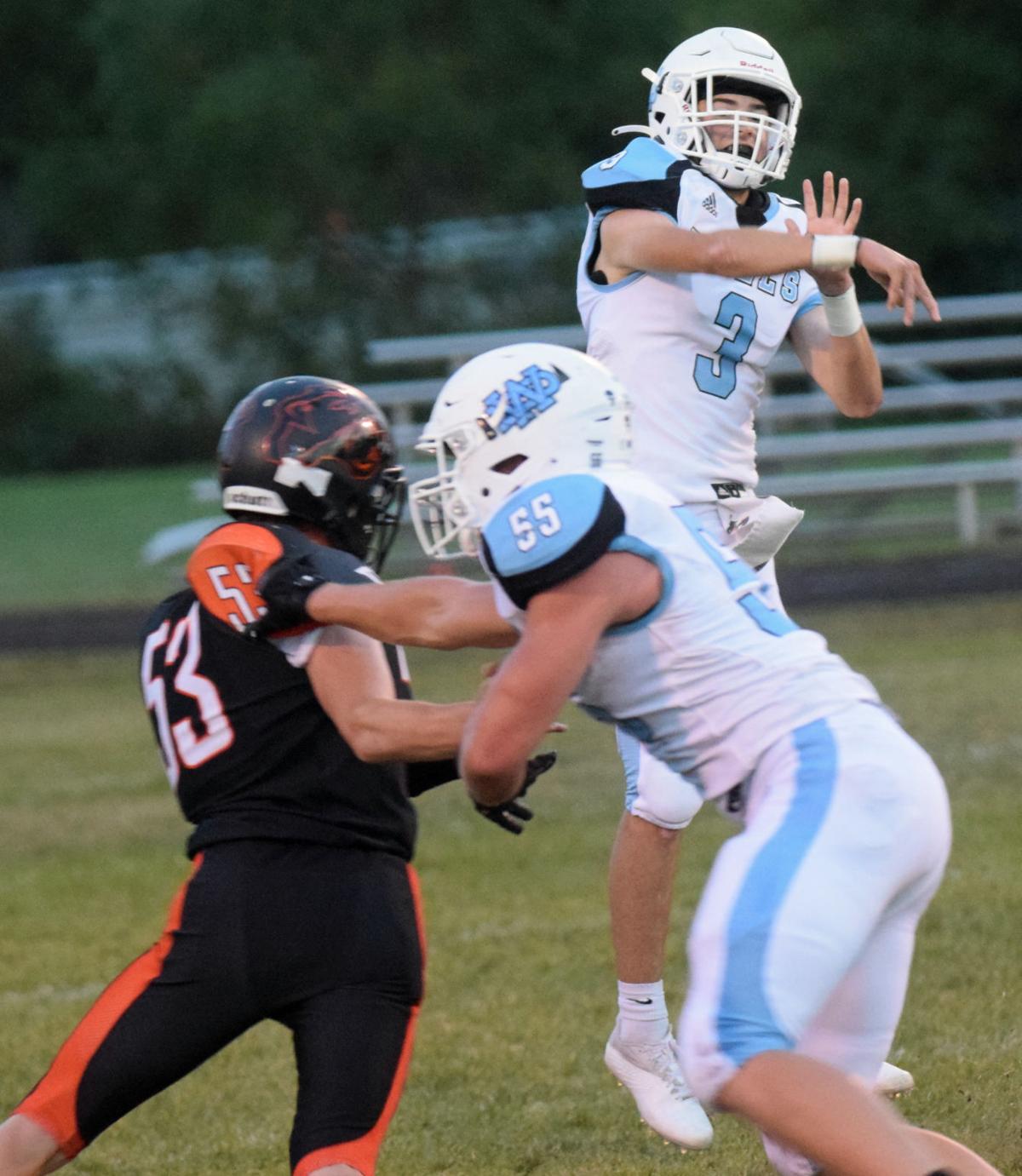 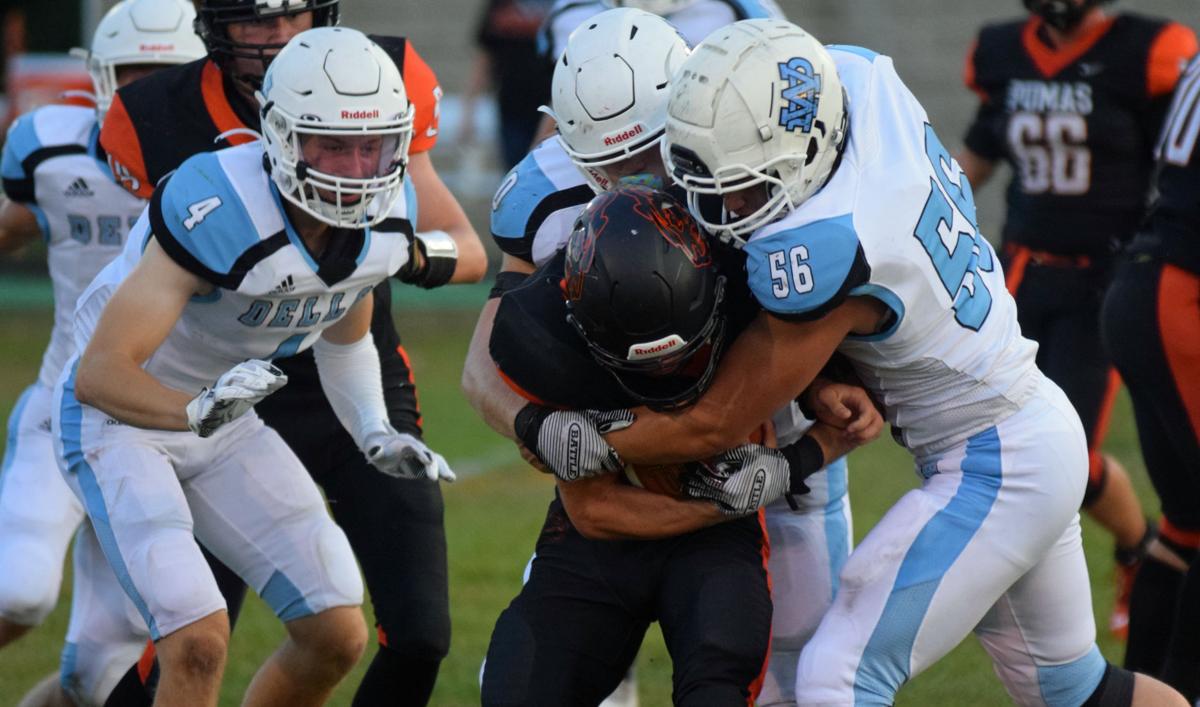 Wisconsin Dells' Hunter Isaacson (right) and senior Will Michalsky (4) converge for a tackle on a Poynette ball player during a South Central Conference game on Sept. 10. 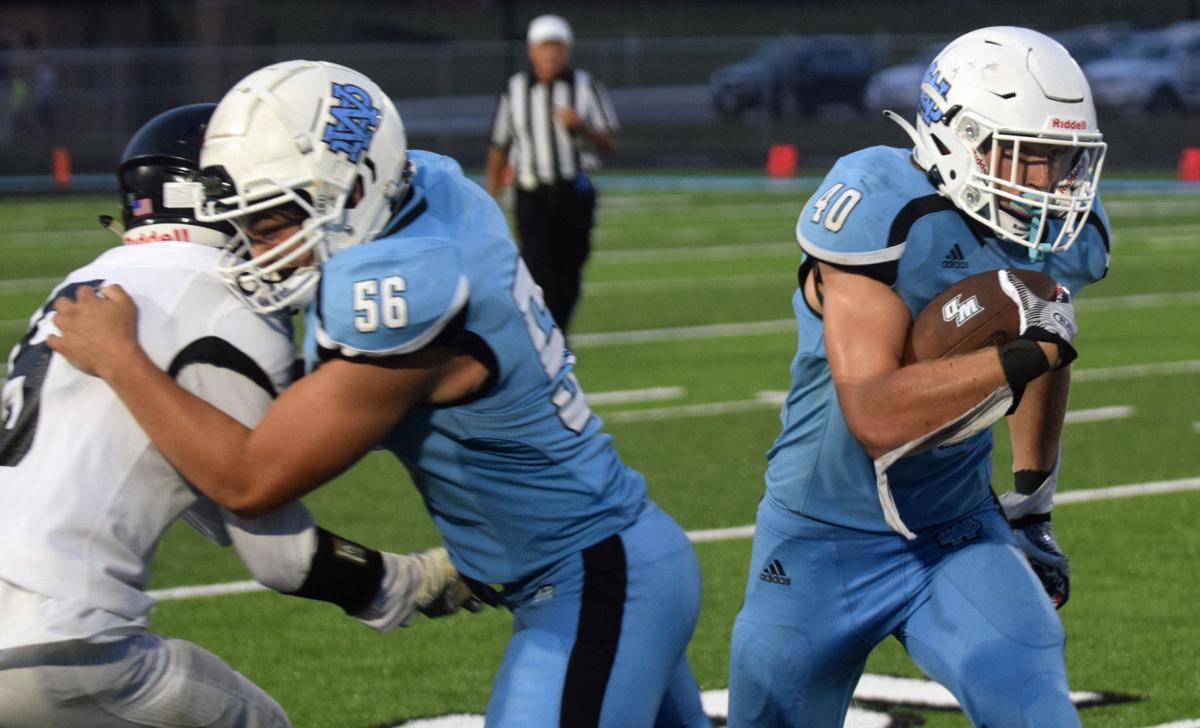 Wisconsin Dells senior Matt Getgen cuts off a block from junior Hunter Isaacson (56) during a non-conference game against Black River Falls on Aug. 26.

Putting your mind to something and envisioning that success is crucial to the second-year Wisconsin Dells prep football coach. It’s also something he instilled in this year’s Chiefs senior class when he started coaching them during their 6th grade season in 2015.

Initially a volunteer coach, Janke became the group’s head coach the following season and has been by their side ever since. And throughout that journey, one preeminent goal has remained in the front of the group’s mind: win a South Central Conference title.

The 12-man senior class has followed through on that promise by already securing at least a share of the Chiefs’ first conference title since 2007. And by entering the final week of the regular season at an unblemished 8-0, they’ve turned the clocks back on a Dells program that hasn’t been perfect this late into a season since the late 1980s.

It’s given everyone in the Dells community, both near and from afar, something to cheer for.

“You look and you see parking lot is full, people are parking on the grass here and there, and I haven’t seen that in a while.”

Neither has the entire Dells community. Following a run of four straight SCC titles from 1984-87, including a WIAA Division 3 state semifinals appearance in 1986. What followed was a lot of ups-and-downs as the Chiefs went on a 15-year playoff drought before eight Level 1 playoff exits in their next eight appearances.

While those following years, including some tough times recently with six losing seasons from 2014-2019, the interest from those still in town and outside it hasn’t wavered.

“The Dells has always been a bit of a football town,” 1987 grad Tim Decorah said. “We just haven’t had the team like this year where you’ve got an undefeated team and you can get the town people, and certainly the alumni, excited about a conference title, and hopefully a good run in the playoffs.”

Early on in the season, the prospects of a deep playoff run weren’t so clear.

Wisconsin Dells grinded out back-to-back one-score wins to open the season over Richland Center (18-13) and Black River Falls (40-34), but after rallying out of a 27-14 deficit against the Tigers, the Chiefs appear to have found a groove.

Since holding off the Tigers, Wisconsin Dells has won each of its last six games by double-digits and not one has been particularly close with an average margin of victory of 34.3 points. That train kept rolling last week with a 42-6 win over Tomahawk on Homecoming after the Chiefs found a replacement game after receiving a forfeit victory over Montello/Princeton/Green Lake.

The Chiefs racked up 455 yards of total offense, including 211 yards passing from junior quarterback Braden Buss and 118 yards on the ground by senior Matt Getgen, to cruise past the Hatchets. Meanwhile, the Dells defense forced a pair of turnovers and held Tomahawk to just 200 total yards on a grand total of 44 plays.

“It’s nice we’ve found that recipe and the kids really buy into it; they take pride in what they’re doing, too.”

That buy-in has been there since Janke took over the reins of the senior class seven years ago. And it’s what made the group want him to take over as head coach following the resignation of Scott Flood after the end of the 2019 season.

“Having coach Janke move up was definitely huge with us, and we wanted him to be our head coach because he’s been with since 8th grade, for me at least,” senior Peyton Knapton said.

“Definitely the connection has been there,” Janke added. “We would sit at the old high school football field after games and we’d just say ‘Look around. Our record is so and so, but we’re looking at the varsity record. We’re looking at getting conference championships on varsity.’”

“You could just see the progression and we’ve stuck to the plan.”

That plan this year has been a punishing game on both sides of the ball. The Chiefs have piled up 3,364 total yards and 44 touchdowns this season, including 2,101 yards and 31 scores on the ground, good for an average of 233.4 yards per game.

Not to be outdone, the Dells defense is allowing just 177.9 yards, including just 92.9 rushing, and 11.9 points per game. And the key to that success may be cliché, but it’s a time tested formula.

“If one bad thing happens, we always pick each other up.”

The team as a whole is definitely picking up the community and giving them something to root for on Friday nights.

“It makes us excited to take the field with the community backing us up, now that we’re a successful program,” senior Matt Getgen said.

The group knows their fans will have their back this week against bitter rival Mauston in which the Chiefs can clinch their first outright South Central title since Decorah’s senior season in 1986. And after a 45-7 loss to the Golden Eagles last season stretched the group’s losing streak in the series to seven, this one has been circled on the calendar for a while.

“We’ve been thinking about this game since before playoffs or anything,” senior Will Michalsky said. “We just have to execute.”

Janke is confident the group will be ready.

“It means a lot to them. Just talking with them over the weekend and at practice on Monday, you can just tell it means a lot to them, to have this honor by themselves,” he said. “You can look in their eyes and just know they’re serious. We just need to come out, prepare for the week (like usual) and do what we need to do.”

The Chiefs executed on the ground and through the air, while nearly pitching a shutout over the Pumas to move to 4-0 for the first time since 2008.

Wisconsin Dells' Hunter Isaacson (right) and senior Will Michalsky (4) converge for a tackle on a Poynette ball player during a South Central Conference game on Sept. 10.

Wisconsin Dells senior Matt Getgen cuts off a block from junior Hunter Isaacson (56) during a non-conference game against Black River Falls on Aug. 26.