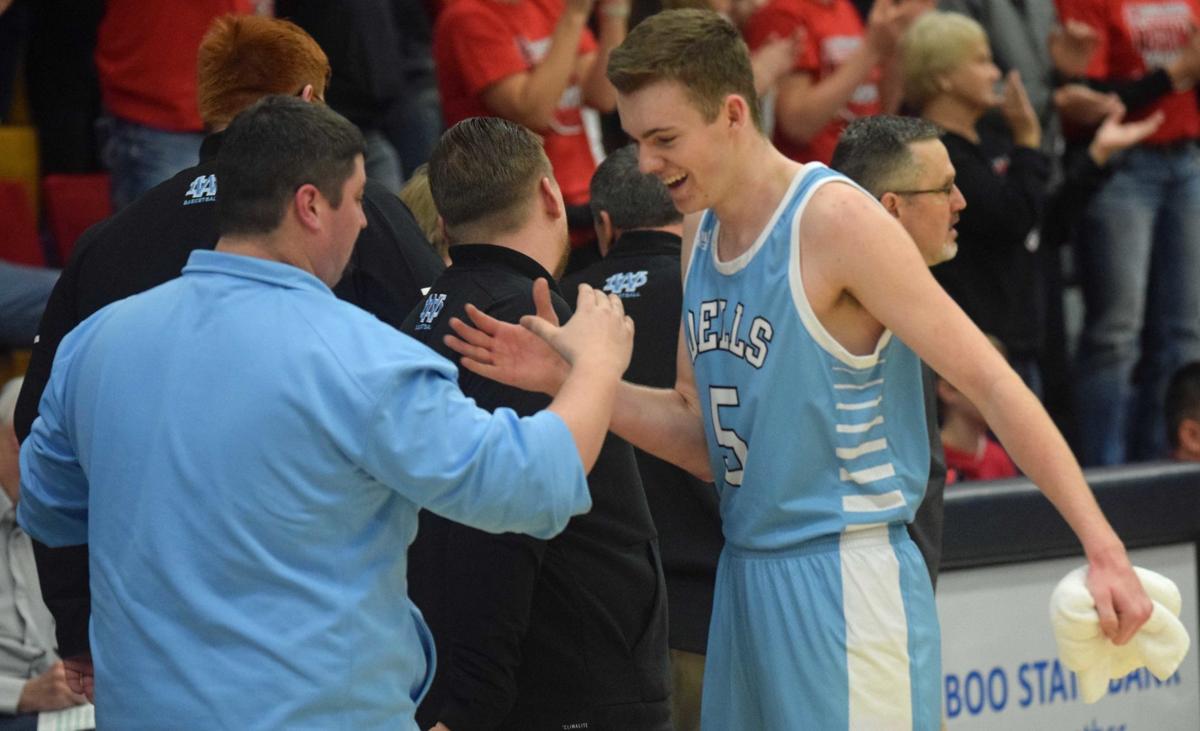 Wisconsin Dells senior Sam Millard high fives assistant coach Mike Janke during Thursday's 69-42 win over Altoona in a Division 3 sectional semifinal game at Baraboo High School. Not long after the game ended, the WIAA announced its decision to cancel the rest of the boys and girls basketball seasons. 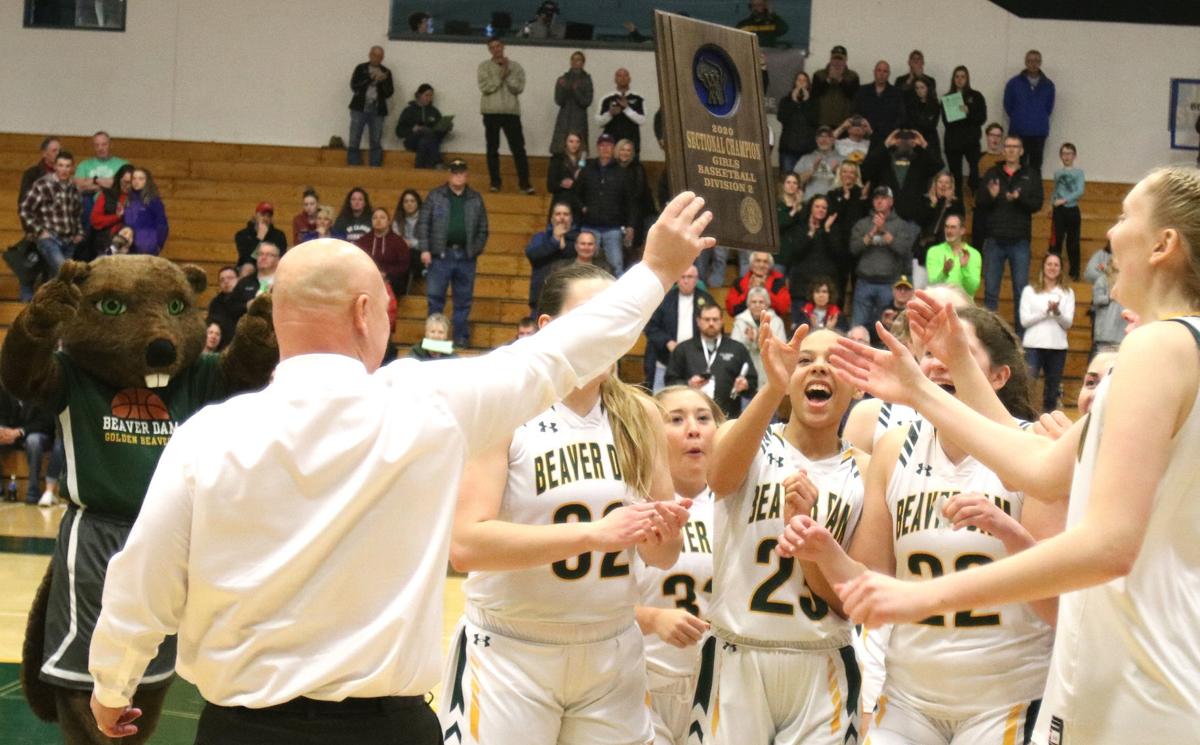 Any way you put it, that was the overall feeling felt by the high school basketball community in Wisconsin after the WIAA’s decision to cancel the remainder of the boys and girls basketball tournament series Thursday night over concerns of the COVID-19 coronavirus.

Those feelings hit close to home for the Wisconsin Dells boys basketball team. The Chiefs were hoping to return to the state tournament for the first time since 2007 after beating Altoona, 69-42 in a Division 3 sectional semifinal game in Baraboo on Thursday night.

The win for Wisconsin Dells sent the Chiefs to a sectional final game against Prescott, which was scheduled to be played on Saturday in Altoona. It was the third straight sectional final appearance for the Chiefs.

“It was pretty devastating when I found out. I just felt really bad for the kids knowing how hard they’ve worked and wanted this. Your heart just goes out to them,” Wisconsin Dells coach Brad Rohling said. “I’m sure when they first heard, they were devastated too, and it was just a lot of emotions mainly focused around the kids and how bad I felt for them.”

“They had already started the girls tournament, and everybody was looking for (Friday) to see they would continue the girls. If they did, everybody thought the boys would be okay,” he said. “But them deciding to cancel both, it’s a tough call they had to make and you have to live with it. We will and I think the kids are pretty resilient, but more so you just feel bad for the kids.”

The cancellation of the remainder of the season was just the latest in a line of postseason heartbreaks for Wisconsin Dells. After falling to eventual state champion Prescott, 86-76 in a sectional final in 2018, the Chiefs suffered a 75-68 overtime loss to Maple Northwestern in a sectional final game last season.

Wisconsin Dells had 10 seniors on its roster, and Rohling said they should be proud of what they accomplished this season, including finishing the year with a 24-1 record.

“Unfortunately it just didn’t work out the way they wanted it to. Thinking about it, I just knew all the way down in my heart we weren’t going to lose another game,” he said. “I don’t think this group was going to allow that to happen given how competitive they are, and it’s just a special group.”

At the girls state tournament in Ashwaubenon, Beaver Dam was trying to become the first program in state history, in any division, to win four straight titles. The Golden Beavers were scheduled to play Pewaukee in a Division 2 state semifinal on Friday afternoon, but instead returned home without getting the chance to play.

Beaver Dam coach Chase said that the cancellation of the tournament began to look increasingly more likely the longer Thursday went on. Word started getting around Thursday evening following a press release from the WIAA a little before 5 p.m. that announced the University of Wisconsin was no longer willing to allow use of the Kohl Center for the boys state tournament, and the writing was officially on the wall.

“Once the Division 4 games started at night everything just kind of had a weird vibe,” he said. “Crandon was staying in our hotel last night, and when they came back, they said there was already talk that they would possibly cancel some of the games. So we knew that that was happening, and then with everything that was going on in the country — with the NCAA getting canceled and then it seemed like other states were starting to cancel, even in the middle of the tournament — (it seemed like) there was going to be a pretty good chance of it.”

As for how the team learned the season was over prematurely, Chase said the girls found out in different waves.

“About half the team was asleep last night when the final news came down and the other half was pretty sad right away. So we let the kids sleep and tried to comfort some of the kids, because it was a lot of our seniors,” Chase said.

The Markesan boys basketball team was riding sky high when it returned home from its 59-35 victory over Palmyra-Eagle in a Division 4 regional semifinal game in Oconomowoc on Thursday night. That high didn’t last long though, as not long after returning to Markesan, coach John Koopman found out the WIAA had canceled the state boys basketball tournament. Koopman immediately shared the news with his players through an application on his phone.

“I got it out right away. We hadn’t been back for very long by that point,” Koopman said “My initial thought was just feeling horrible for the kids. I’ve been coaching for a while, but when you have a year like this, you know you only have so many chances to do it.”

Markesan earned a share of the Trailways West Conference championship with Randolph during the season, and then won a regional title with a 58-48 win over Pardeeville last Saturday. Thursday’s win over Palmyra-Eagle sent the Hornets to a sectional championship game against Cuba City, which was scheduled to be played in Baraboo on Saturday afternoon.

In that game, Markesan would have been playing for the program’s fourth ever trip to the state tournament, and first since 1998.

Koopman said his team was looking forward to the opportunity to play the Cubans, who were 25-0 and the state’s top-ranked team in Division 4.

“They’re upset, but they’re more disappointed. They’d like a chance to play the No. 1 team in the state,” Koopman said. “That’s what you want to do, but I think they’re mature enough with the fact where they just (know) it’s out of our control. It’s not like we’re the only ones in that boat. You’re looking at professional, college and now high school and youth. Everything is going down, so it’s not like they’re just picking on basketball.”

Randolph had a chance to return to the boys state basketball tournament for the first time since it won a Division 5 state title in 2013, following its 76-54 victory over Monticello in a sectional semifinal on Thursday night in Madison.

Randolph was scheduled to play top-ranked Sheboygan Lutheran, the defending Division 5 state champions, in a sectional final on Saturday night in Fond du Lac, but will never get the chance to see if it could have pulled off the upset.

“You don’t think of some type of catastrophe or some type of an event to stop something like this,” Fischer said. “You can talk about that not just in sports. Look at what’s going on in the nation now, to try and predict that and see it coming, you don’t see it coming.”

Fischer said his players will learn from this experience.

“You take a lot of stuff for granted until something’s taken away from you or you don’t have something anymore,” Fischer said. “Looking back, I feel awful for my senior. I’ve got one senior, Peyton Moldenhauer, and I feel awful him because that was his last shot. For him, it’s tough. How do you tell a kid that what he’s lived for, what he’s worked for, how do you tell him that there’s nothing you can do?

“In the end, the life lesson is appreciate what you’ve got. A lot of things are out of our control. God has a plan, what that might be, we don’t know. The best thing we can do is focus on what we can control and go from there.”

BARABOO — With a 21-point halftime lead, everything looked easy as pie for the Wisconsin Dells boys basketball team.

Wisconsin Dells senior Sam Millard high fives assistant coach Mike Janke during Thursday's 69-42 win over Altoona in a Division 3 sectional semifinal game at Baraboo High School. Not long after the game ended, the WIAA announced its decision to cancel the rest of the boys and girls basketball seasons.