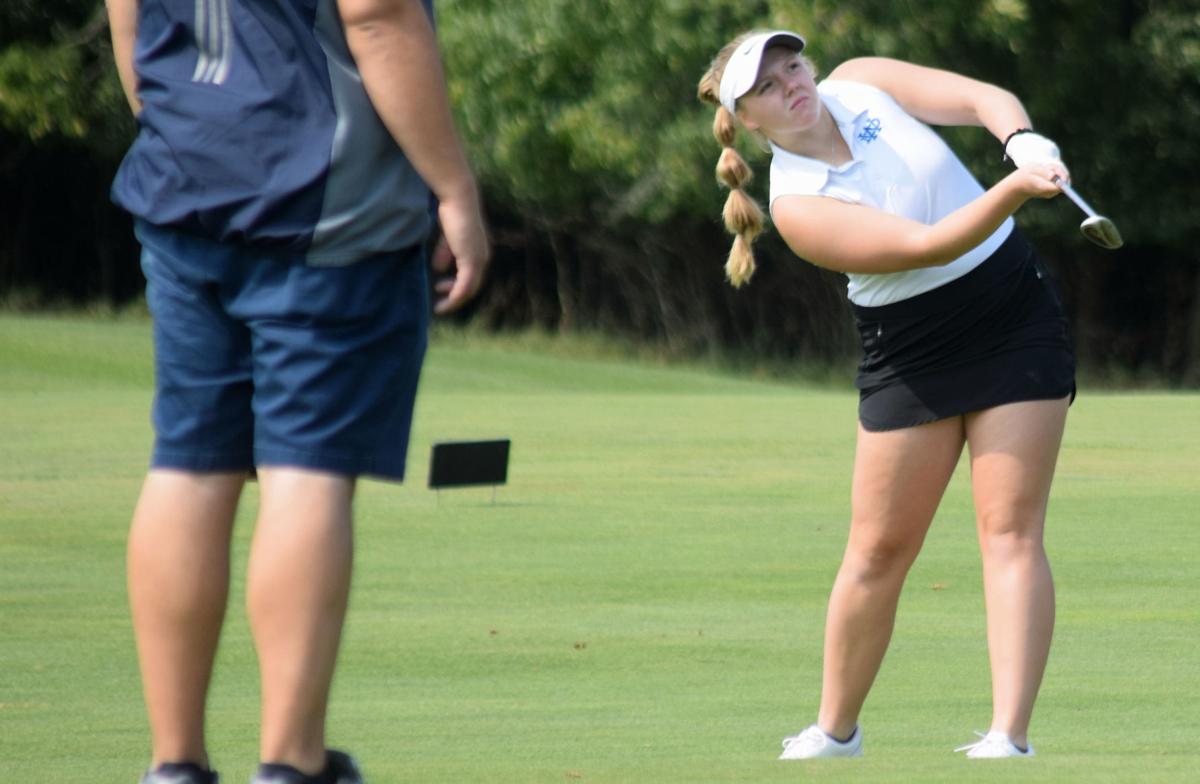 Wisconsin Dells senior Kayla Gray chips on to the green of the third hole at Wild Rock Golf Club during a non-conference dual meet against Portage on Sept. 21. Gray finished third at Wednesday's WIAA Division 2 Prairie du Chien regional to help lead the Chiefs to a second-place team finish. 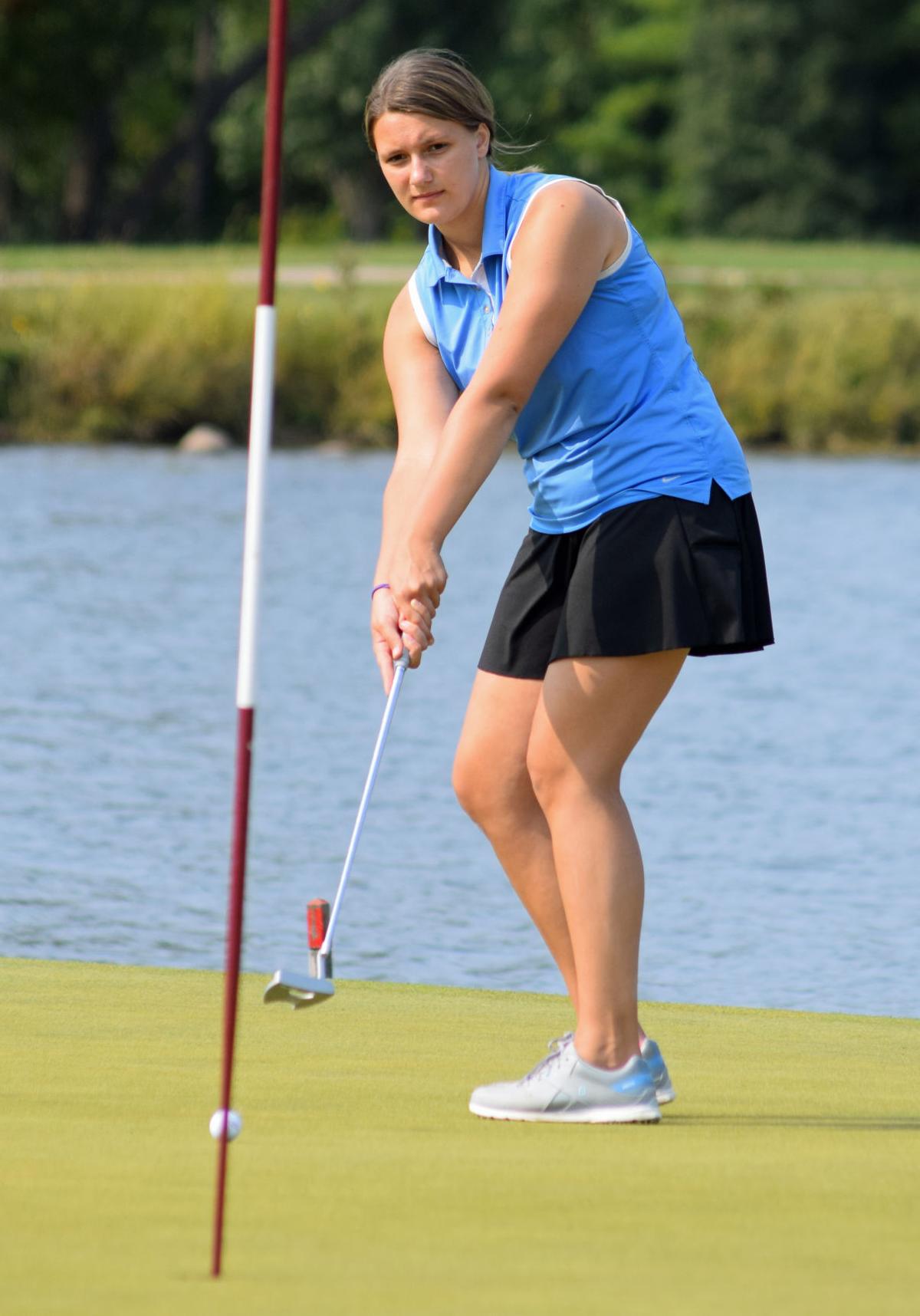 Wisconsin Dells freshman Madchen Ewig tracks her putt on the par-3 fourth hole at Wild Rock Golf Club during a non-conference dual meet against Portage on Sept. 21. Ewig carded a 99 for the Chiefs in her first-ever regional appearance.

The Chiefs put that added knowledge to good use as they finished second at the WIAA Division 2 Prairie du Chien regional to qualify for its fourth consecutive team sectional. Wisconsin Dells combined to shoot a 395 and hung with perennial Div. 2 state title contender Madison Edgewood throughout, but the Crusaders (382) proved to be too much.

“It’s awesome and it’s great (for the girls). With the weird year we’ve been having, it’s just awesome and if you would have asked me in August if we would have gotten this far, I would have said I don’t know. We’re here now and we’re just ecstatic,” Neilsen said.

“It’s a difficult court as it is and the wind was brutal today, but they knew what they were getting into and a little more at comfort.”

Leading the way again for Wisconsin Dells was Kayla Gray as the senior finished third overall with a 19-over-par 91. Gray struggled over the difficult front nine shooting a 49, including a 6-over-par 9 on the par-3 fifth hole, but leveled out over the back half.

Gray shot no worse than bogey over the final nine holes, including three pars, to close out her round on a high note.

“The front nine, in my opinion, is more difficult and she gave a few strokes away on hole No. 5,” Neilsen said. “She made a couple mistakes that she didn’t have to make, but that happens in the game of golf. I always preach to the girls, and even when I coach the boys, ‘That happens. It’s about what you do next.’”

“She went out the rest of the round and played really well, and that’s awesome. I was really happy for her.”

Behind Gray was fellow senior Gracie Walker and freshman Madchen Ewig, who shot a 98 and 99, respectively.

Like Gray, Walker struggled over the front nine, starting her day with a 51 despite a birdie on the par-3 sixth hole. She did however, find a groove down the stretch, including one par and just one triple bogey.

“She’s been doing that the last couple meets and it’s taken her a while to get going this year, but she’s getting moving at the right time, so I’m really glad to see that,” Neilsen said.

Ewig also flashed signs of strength, and weakness, in her first-ever regional. Ewig opened with a 54 on the front nine, including a quadruple bogey on the par-4 second, but she caught fire on the back half.

She opened her back nine with a bogey on the par-4 10th and tallied a par on the par-4 14th to help shave off nine strokes on the back half.

“She’s not as familiar with the varsity circuit as some of the other girls, so you could tell she was nervous, but once she got onto hole No. 4 and she had a good drive, you could see it in her face like ‘Oh yeah, I can play golf,’” Neilsen said.

Rounding out the Chiefs’ competitors were sophomore Libby Walker and junior Lauren Eck, who shot a 107 and 120. Despite the struggles, Neilsen was pleased with the pair’s ability to push through and help the Chiefs to a runner-up finish.

With the program’s first-ever team state berth very much in reach next Tuesday, Neilsen knows how big of a confidence boost taking second place was given it was behind Edgewood.

“Obviously we had some struggles on the back with some of the girls, and that happens, but just to be there with them was awesome,” he said of the Crusaders, whom the Chiefs trailed by six strokes at the turn.

“I think it’s a huge motivator for the girls because Edgewood, because they’re historically a good team, can be a little intimidating. But they were right with them, and they saw they can be right with them, which can be a huge boost heading into sectionals.”

Note: top four teams, along with the top four individuals not part of a qualifying team, advance to sectional play.

For the second straight season, the Wisconsin Dells girls golf team is the class of the SWAL/SWC Conference.

The combination of quick greens and tight pin hole locations can be a golfer’s worst nightmare.

Wisconsin Dells senior Kayla Gray chips on to the green of the third hole at Wild Rock Golf Club during a non-conference dual meet against Portage on Sept. 21. Gray finished third at Wednesday's WIAA Division 2 Prairie du Chien regional to help lead the Chiefs to a second-place team finish.

Wisconsin Dells freshman Madchen Ewig tracks her putt on the par-3 fourth hole at Wild Rock Golf Club during a non-conference dual meet against Portage on Sept. 21. Ewig carded a 99 for the Chiefs in her first-ever regional appearance.