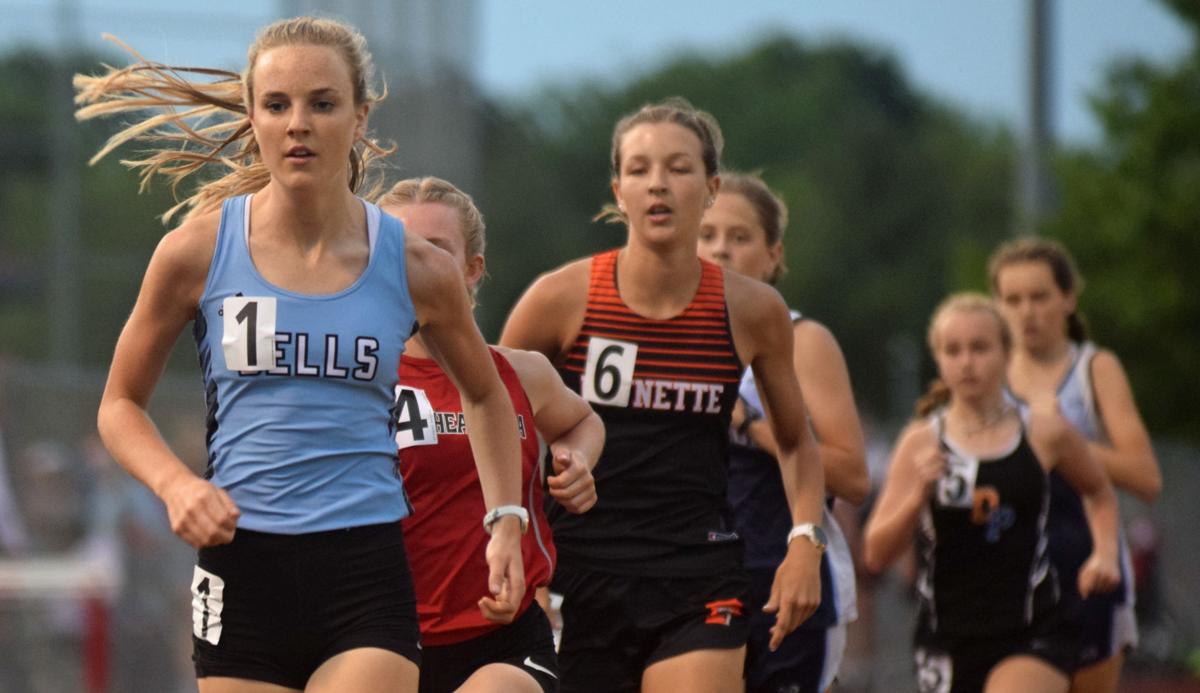 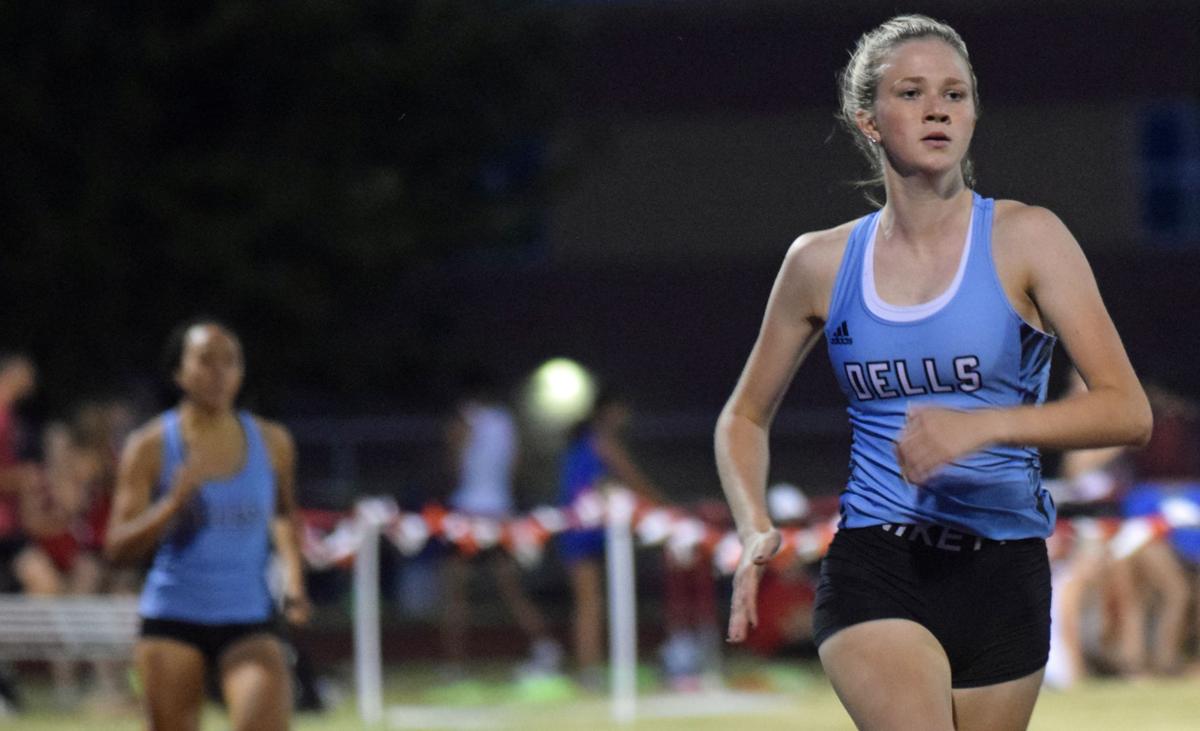 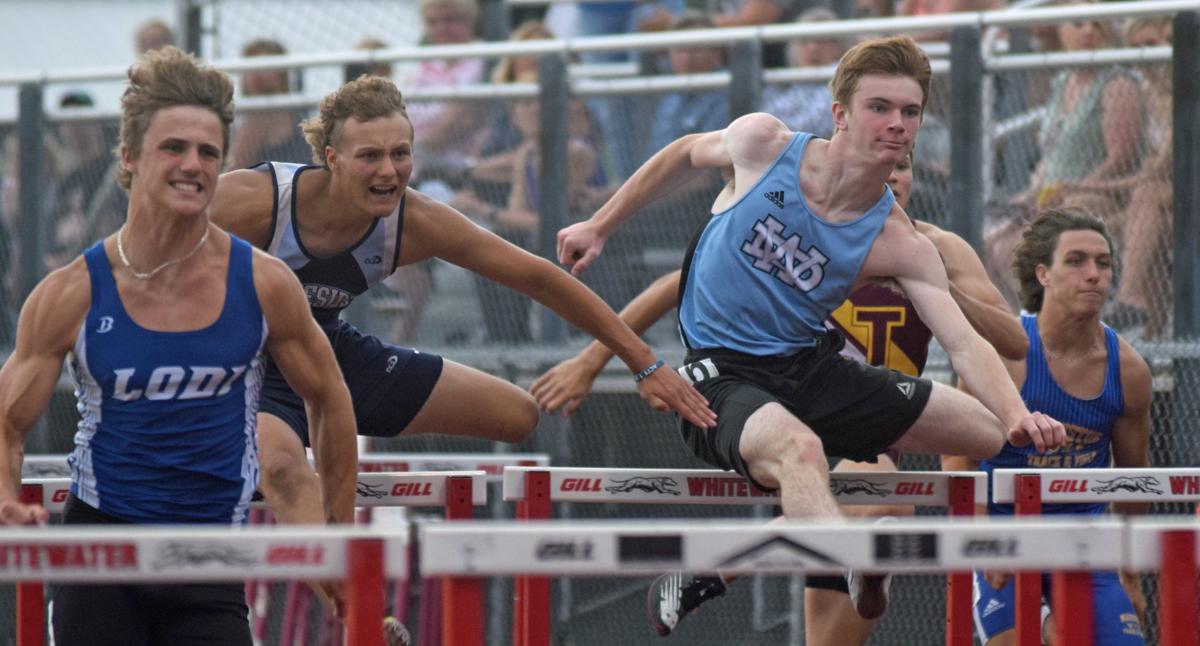 Wisconsin Dells sophomore Jacob Rogers skies over a hurdle amongst the lead pack during the finals of boys 110-meter hurdles in Thursday's WIAA Division 2 Whitewater sectional. 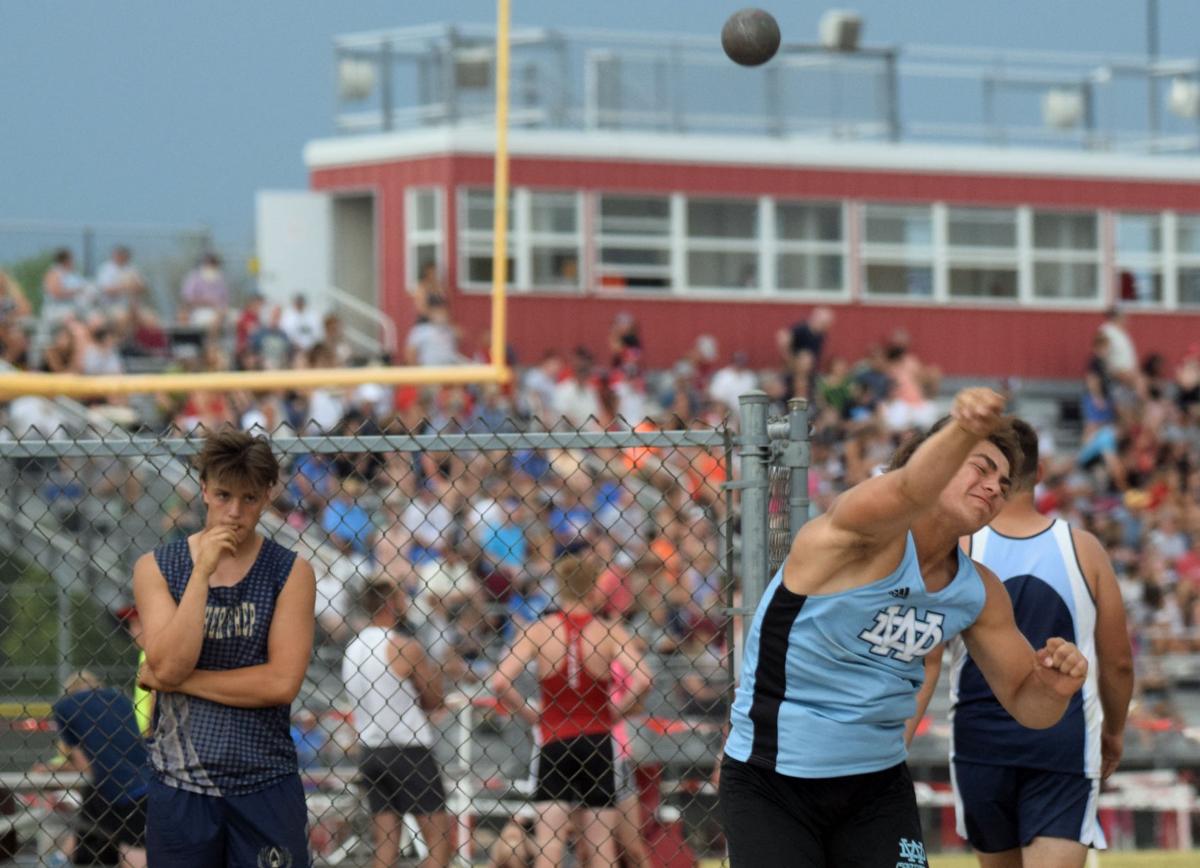 Some can be overcame quickly, while others persist with a much longer, more arduous recovery process.

It’s a feeling all too familiar for Emily Cunningham. Prior to this season, the Wisconsin Dells senior dealt with nagging injuries both her freshman and sophomore track and field seasons — Cunningham and the rest of the state didn’t get to compete last year due to the COVID-19 pandemic.

So when Cunningham began preparing for her final season with the Chiefs, injury free for the first time, she wanted to do so to the best of her ability. It’s certainly worked so far as Cunningham finished second in the 1,600-meter run at last Thursday’s WIAA Division 2 Whitewater sectional to earn a first-ever individual berth into the Div. 2 state meet this Friday at UW-La Crosse.

“My mindset changed and I trained harder this winter, and right now I feel more than ready, it’s just kind of an unbelievable feeling,” Cunningham said. “Honestly, for myself, I know that I’m ready, mentally.”

Cunningham described the feeling of entering the 2021 season without injury as “a clean slate,” and a welcome one at that after lingering issues in her first two seasons. As a sophomore Cunningham dealt with horrible shin splints, while as a freshman she wasn’t even able to run for an entire year due to patella femoral pain syndrome, more commonly known as “jumper’s knee.”

“It was a little bit of overtraining, I guess, which I’ve definitely learned from my mistakes,” she said.

That improvement in training began this winter when Cunningham honed in on her weight training and strengthening herself over the winter. On top of increasing her mileage, thanks in part to the lack of any nagging injuries and in preparation of her cross country and track and field future at UW-Stout, Cunningham said she took the school’s strength and conditioning class.

She added in even more weight lifting at home, while making her biggest change outside of the gym by improving her diet.

“Not that it was bad before, but I took more supplements, took more iron and I really just went in-depth into everything I could just to make myself stronger and healthier, and to avoid injuries,” Cunningham said.

It’s benefitted Cunningham not only on the track, but also given her a glimpse into her future course work as she plans to major in dietetics next fall.

“That field has always been such an interest for me because I’ve been interested in healthy eating and nutrition, and I think it’s because of my past with injuries and stuff, because it had to do with my nutrition and certain things I was missing,” she said.

“I’m just really excited to focus on something I’m really interested in, and to make a difference and prevent other athletes from going through something I went through.”

Distance events have always been of high interest for Cunningham as well, dating all the way back to her youth. Cunningham recalled following her mother on weekend road races growing up, to the point where she was signed up for her first race in first grade.

Cunningham won the race and it was love at first sight from there.

“Ever since then, when I got that trophy, I wanted to compete and everything was just a challenge,” she said.

She’s been up to the challenge all season long. Except a pair of scratches, Cunningham has won the mile in every regular season event, logging a previous best time of 5 minutes, 19.77 seconds at the Tomah Invitational on May 25.

While she crossed in 5:23.26 to win the regional title, Cunningham posted a season-best time of 5:18.95 to finished runner-up behind Brodhead/Juda’s Madelyn Mcintyre (5:15.38) at sectionals. Cunningham qualified for sectionals in the 3,200 as well, but she said she opted to scratch the event because “I just really like the mile and wanted to focus on that.”

That focus hasn’t stopped either as Cunningham has her sights set on the Wisconsin Dells school record time of 5:10.34 set by Stacey Swatek in 2010. The shortened regular season gave Cunningham plenty of confidence that it may be a reality, with the condensed schedule shining a light on the progress she’s made.

“I realized how much I’d improved since the beginning and it wasn’t even that long of a period of time. I don’t know, I just realized I had so much more,” she said.

Elder sister Lindsay Cunningham helped illuminate that potential as well. The 2020 graduate had a stellar freshman season with the Winona (Minn.) State track and field team, finishing fifth in the women’s 5,000 at the Northern Sun Intercollegiate Conference championships with a new Winona State record time of 17:24.77.

“Seeing how much she’s changed since high school, makes me so excited and want to push myself even more to be like that,” Emily said, having ran alongside her elder sister at state previously as a sophomore on the Chiefs 1,600 and 3,200 relay teams.

Emily Cunningham won’t be running alone on Friday either, with junior Hailey Anchor qualifying in both the 400 and 800 on the girls side. Anchor swept the pair of events at sectionals with respective times of :59.29 and 2:23.82, and is looking to improve on her sixth-place finish in the 400 as a freshman in 2019.

“It’s really special, because we’ve been friends ever since the beginning of our running journey. Just to share that means a lot to me, and I know it means a lot to her,” Cunningham said. “We’ve always been really good friends and training partners, and it’s kind of cool how she can go from running distance in cross country to dominating everyone else in the sprints. That’s pretty amazing of her.”

As special as it is to be alongside one of her closest friends, Cunningham said she’s just excited to bask in the state atmosphere one final time.

“I miss all of that so I’m just excited to be there and race all the people I’ve been following and ran against at sectionals. I’m really excited about all of that,” she said.

The pair of Cunningham and Anchor aren’t the only Chiefs state qualifiers after sophomores Jacob Rogers and Hunter Isaacson each finished in the top-four of the 110 hurdles and shot put, respectively, at last Thursday’s sectional meet for their first-ever state berths.

Rogers finished fourth in the prelims before nearly shaving off a half-second to take third in the 110 hurdles in 15.29 seconds. He’ll have a phenomenal shot at the podium as he enters Friday with the fourth-best seed time.

Isaacson meanwhile will have an outside shot at the podium after finishing second in the shot put. His throw of 49 feet, 11 inches wasn’t enough to keep up with Platteville’s Devin Digman (51-1) to settle for silver. Isaacson will enter seeded seventh, just one spot off the medal stand.

It took two days to put a bow on the WIAA Division 3 track and field sectional meet at Princeton High School, the result of stormy weather mov…

TRACK AND FIELD: Boatload of athletes from area excel at sectionals to qualify for state meet

The field is set.

Wisconsin Dells sophomore Jacob Rogers skies over a hurdle amongst the lead pack during the finals of boys 110-meter hurdles in Thursday's WIAA Division 2 Whitewater sectional.