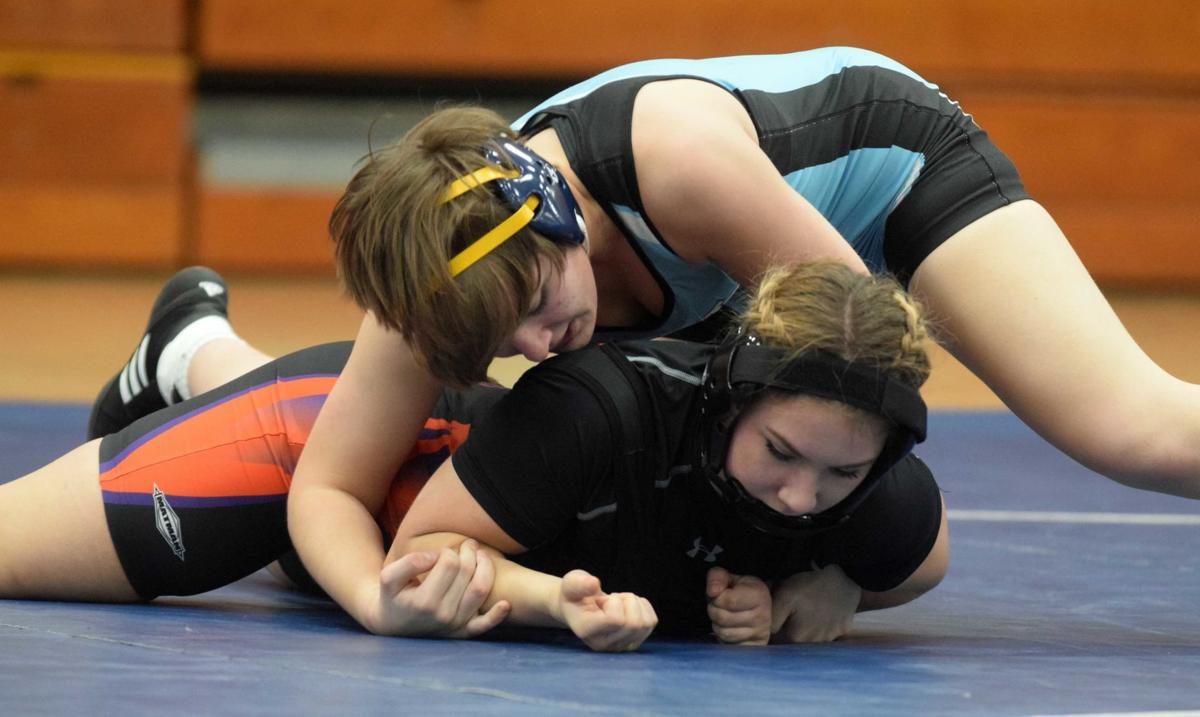 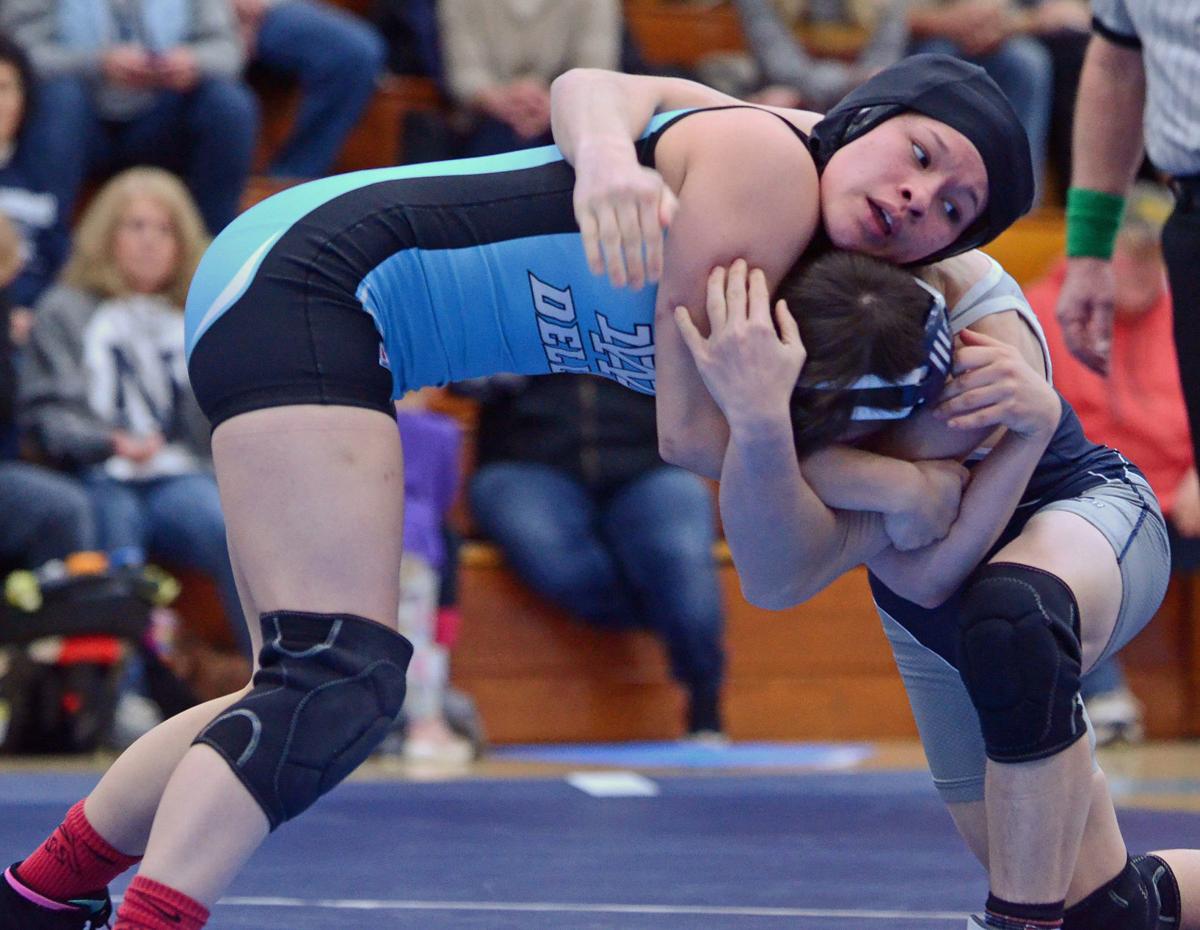 Wisconsin Dells senior Elizah Leonhard locks up with Nekoosa/Wisconsin Rapids Assumption's Blaze Thurber during their match at 120 pounds in a South Central Conference dual meet in 2018. 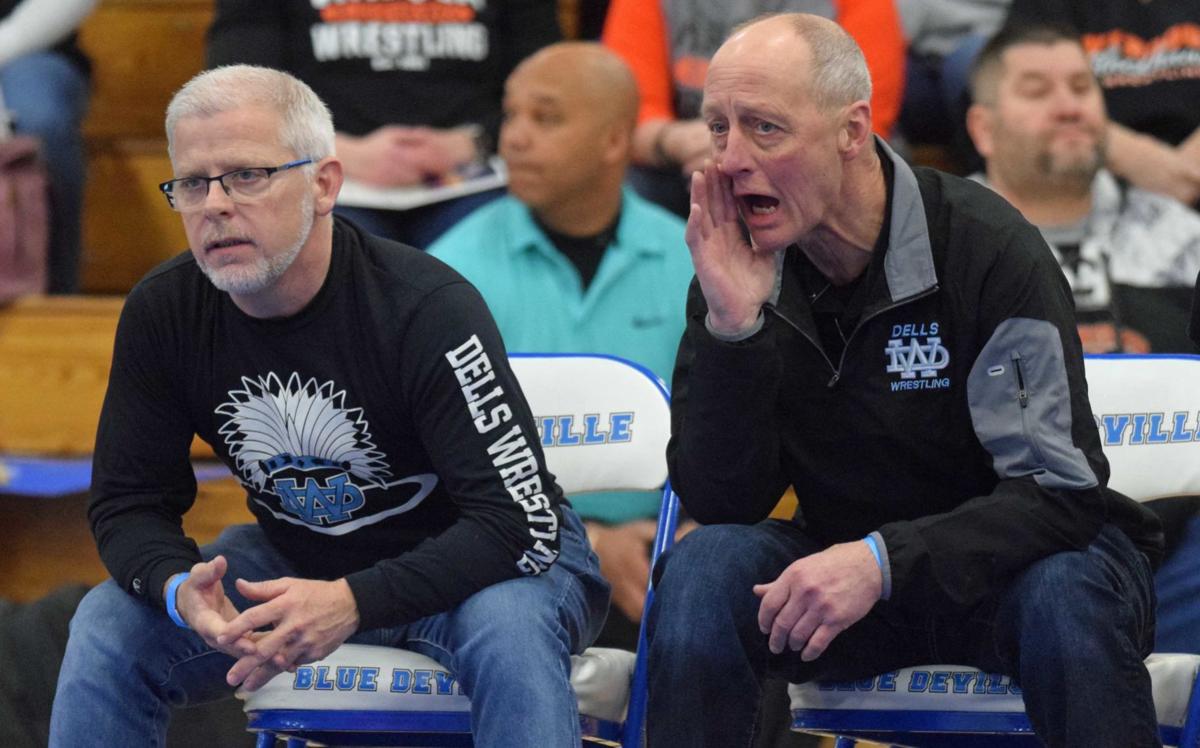 Wisconsin Dells coach Jim McFaul, right, is thrilled with the addition of a girls-only state tournament starting in 2021-22. McFaul is hopeful teams across the state can build up their own programs over the coming years to the point where teams can host girls dual meets.

Girls wrestling has been building throughout Wisconsin over recent years with participation growing across all four corners of the state.

After mounting cries to designate girls wrestling its own sport, the Wisconsin Interscholastic Athletic Association took the first step towards just that last month. While it didn’t elect to fully recognize girls wrestling as a sport, the WIAA Board of Control unanimously voted 10-0 on the recommendation to allow a girls wrestling state individual championship for the 2021-22 season.

Following an initial proposal to add girls wrestling as its own sport for the upcoming 2020-21 school year, there was skepticism about a timetable to fully add it as a sport, especially given the current state of sports due to the COVID-19 pandemic. However, WIAA Executive Director Dave Anderson said that he absolutely supports welcoming girls wrestling as a sport.

“I’m very excited for the girls, especially the ones we have on our team. They’ve worked very hard for this and it’s time. When we had our sectionals in Evansville, there was a vote taken between the coaches and it was unanimous; everybody voted that there should be a state tournament for these girls,” McFaul said.

“Would I have liked to have it happen sooner? Absolutely, but it’s a step in the right direction and I realize these things take time,” McFaul added. “We’re all very happy about it and we’ve got a couple girls coming back this year. It’s going to be big for the sport and hopefully it helps with the participation at our school and every school.”

Wisconsin Dells is just one of four area schools to feature female wrestlers last season, including Elizah Leonard, Tess Jisa and Jade Herzer. Along with the trio of Chiefs, Gwen Golueke wrestled for Poynette, Caylee Fry competed for Reedsburg and Alexis Winecke wrestled for Baraboo.

While Leonard, Jisa, Golueke and Fry all graduated, Leonard said she’s thrilled for the next set of girls wrestlers that will get the chance to build off their hard work.

“I’m very overwhelmed with emotions, like I feel very happy and I’m very proud of the girls that did it with me, because it just shows that our hard work paid off,” Leonhard said. “I think this is the first step to making the sport really grow. Obviously it’s growing and it’s one of the fastest growing sports in America, but I just feel like this is going to kickstart it more.”

The immediate lack of a state tournament is also bittersweet for Herzer as she is entering her senior year this winter. However, she feels the same pride as Leonard and the graduated seniors in helping lay the groundwork for the WIAA’s decision.

“It feels good, because I have been wrestling for so long and wanting this, so I feel being out there and speaking, it has to be my job because I personally want this and have been working for it. It has to be done and I have to be talking about it, showing examples,” said Herzer, who began wrestling at 5 years old.

Herzer won’t be alone this year though, as she will be joined by sophomore Elicia Leonard. The younger sister of Elizah, Elicia didn’t wrestle for the Chiefs last season and hadn’t since 2017 after winning youth state at 135 pounds. However, after spending a week with the group leading up to the Wisconsin Wrestling Federation Women’s Folkstyle State meet in March, Elicia Leonard donned a singlet again.

On the day of the tournament, Elicia was unknowingly signed up by her parents and proceeded to take second place at 160 pounds.

“We actually just signed her up and said ‘You’re going to state for your birthday.’ She got second place and then she got the taste of what it used to be, the camaraderie, and she was like ‘Yeah, I need to be back in wrestling,’” said Morning-Star Leonard, Elizah and Elicia’s mother.

Herzer and the rest of the girls, plus McFaul, are all hopeful that the assurance of a girls only state tournament in 2021-22 will help drive up participation numbers this winter. The recent trend shows that it shouldn’t be an issue.

At last December’s Badger State Invitational there were 68 girls representing 32 teams, while 85 wrestlers competed for 55 different teams at the WWF Women’s Folkstyle State Tournament months later. Herzer said other female classmates have shown interest in going out, but have gotten cold feet; however, she’s confident that will change.

“Seeing this is all really exciting and I want to convince everyone to just try it. See if you like it, because it will be totally worth it if you try it; it will complete you and I just want everyone to try it,” she said.

When the 2021-22 season does finally begin, girls and boys will still compete against each other during the regular season before splitting in February, should a school or co-op program join the tournament. If a school opts not to participate in the girls tournament, it must allow its female wrestlers to compete on the boys team, including in the postseason, if the girl has earned a varsity spot.

McFaul said he expects Herzer and Elicia Leonard to challenge for spots in the Chiefs’ varsity lineup given their talent level, and believes the girls who have come through the Wisconsin Dells program “have definitely gotten better because of the competition they get practicing daily with the boys.”

That doesn’t mean it won’t present challenges. All wrestlers are allowed to compete in only seven tournaments throughout the season, so McFaul and his coaching staff could be faced with the dilemma of determining what girls-only tournaments the pair competes in versus co-ed tournaments they’re needed for.

McFaul is hopeful that in the future, once schools build up their girls programs, there can be girls-only dual meets, a sentiment shared by Elicia and Elizah Leonard.

“I feel like now that it’s recognized, more people will want to do it and be interested in it. I’m more excited,” Elicia Leonard said.

“I just hope that the sport for women is the same as the men, and they get the same opportunities and recognition men do,” Elizah Leonard added. “This is the first step; I hope there will be an actual women’s team, and there will be girls that want to wrestle for team and it’s official like colleges are now.”

There will plenty of new at Wisconsin Dells High School this year.

Wisconsin Dells senior Elizah Leonhard locks up with Nekoosa/Wisconsin Rapids Assumption's Blaze Thurber during their match at 120 pounds in a South Central Conference dual meet in 2018.

Wisconsin Dells coach Jim McFaul, right, is thrilled with the addition of a girls-only state tournament starting in 2021-22. McFaul is hopeful teams across the state can build up their own programs over the coming years to the point where teams can host girls dual meets.