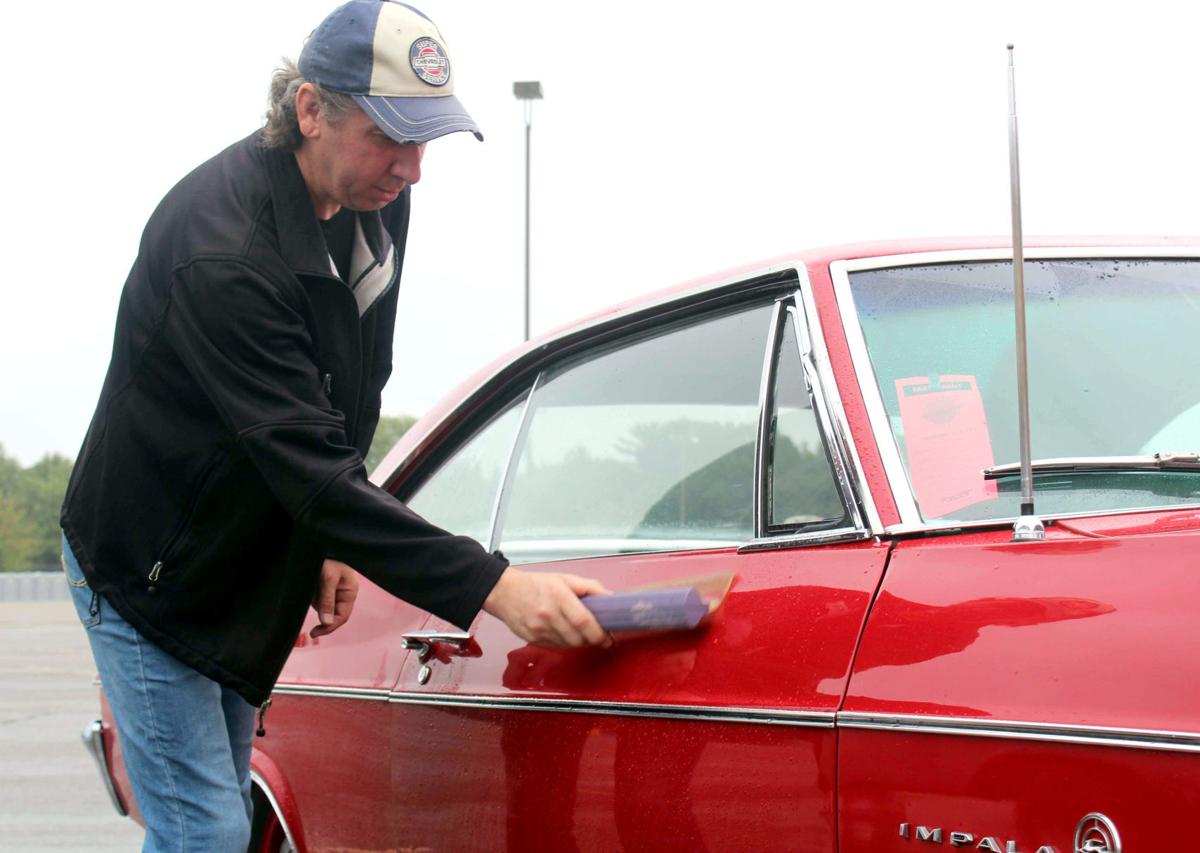 Jeff Batz, a Green Bay resident, cleans his car of dust and rain water Saturday during Automotion at Mt. Olympus Water & Theme Park in Wisconsin Dells. Batz father, Ron, also showed his own vehicle of the same make and model. 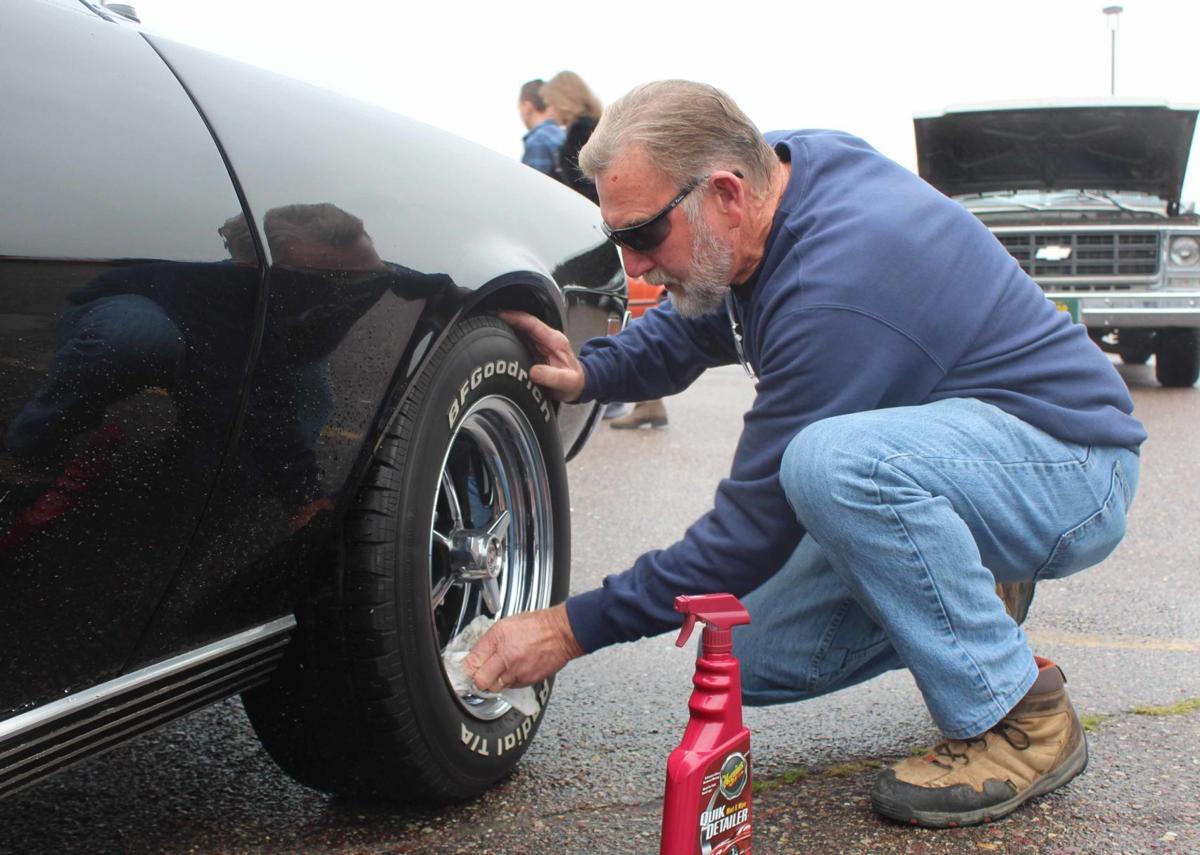 Madison resident Jerry Weisensel cleans grime from his tires shortly after arriving in Wisconsin Dells for Automotion after driving over an hour to arrive at the event Sept. 12. 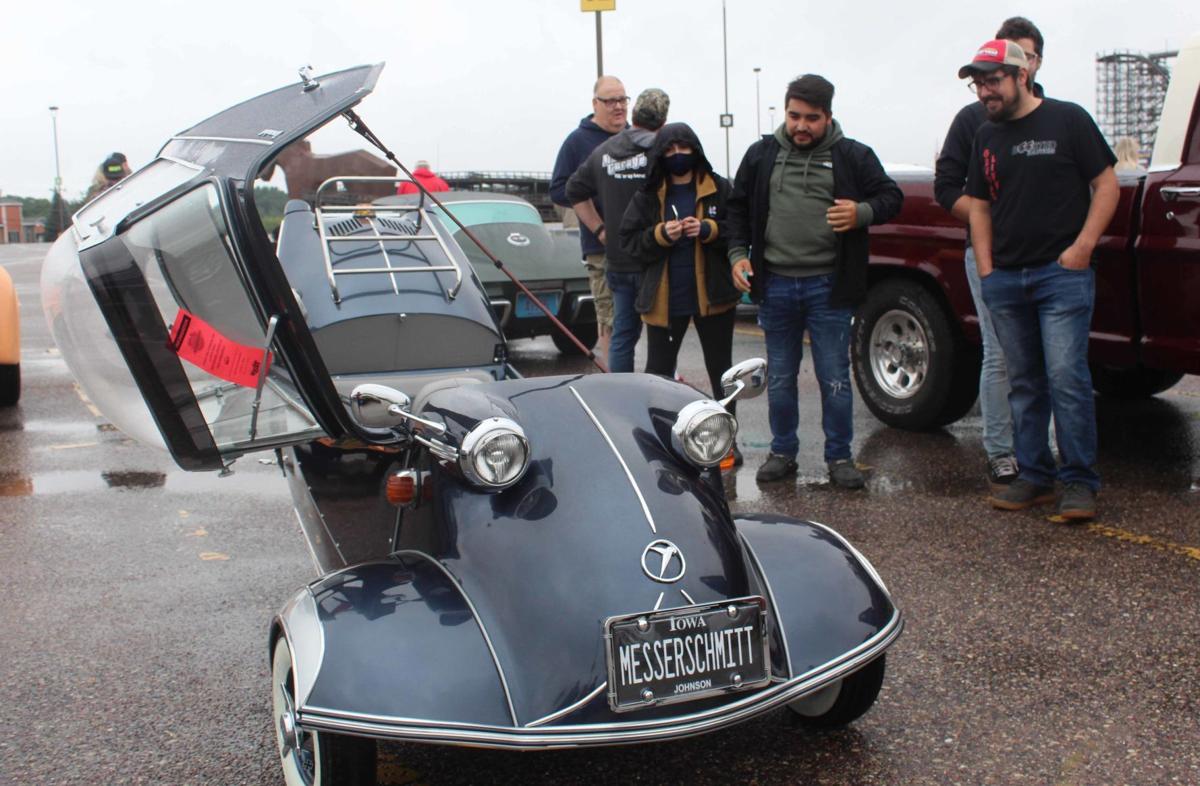 Attendees at Automotion Classic Car Show in Wisconsin Dells look at a 1955 Messerschmitt Sept. 12, one of the cars on display at the two-day annual event. 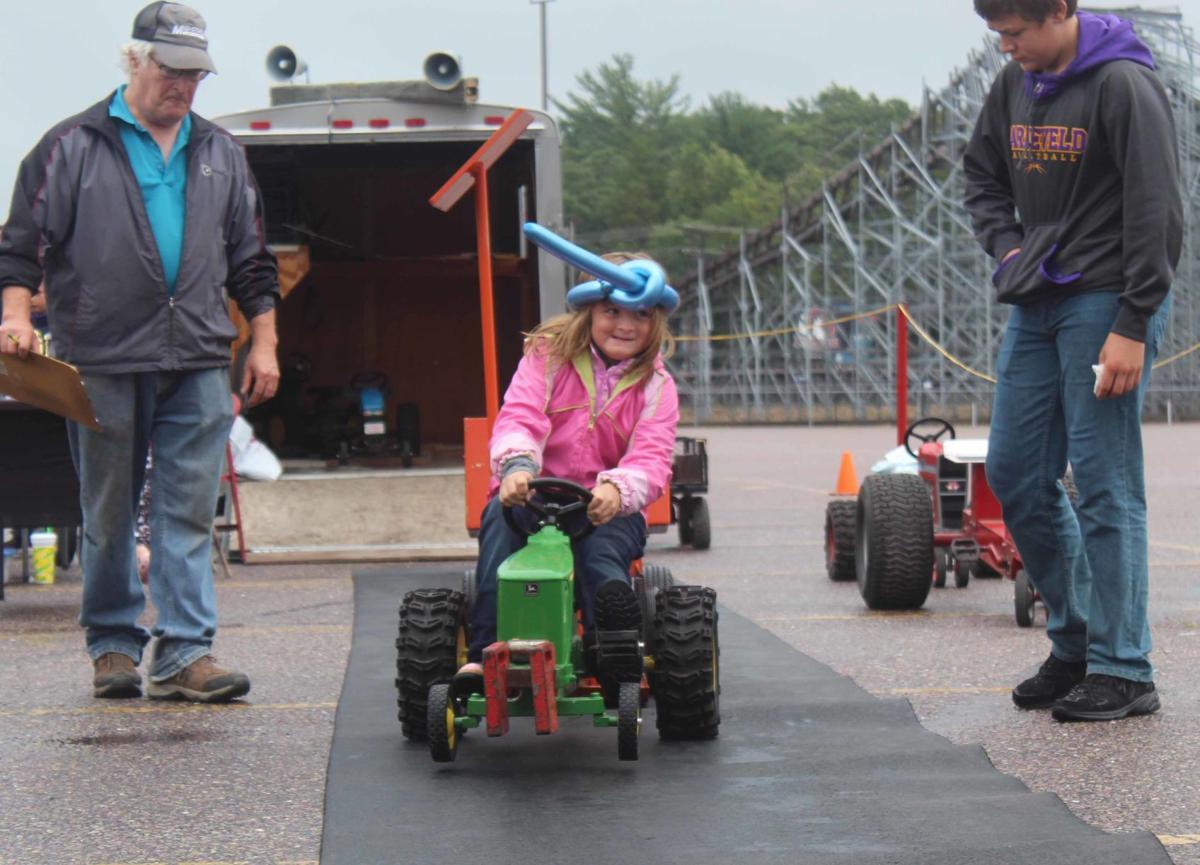 Dells Managing Director of Festivals & Events Jenifer Dobbs said more than 100 cars pre-registered for the event, held Sept. 12-13. After originally being postponed in May due to COVID-19 concerns, the 34th annual event was rescheduled and held at Mt. Olympus Water & Theme Park.

Dobbs said on Sept. 12 the event was approaching about 85 cars and more might come throughout the afternoon as the rain let up. In a follow-up interview Sept. 13, she said at 11 a.m. about 300 cars were registered for the event’s second day and were still coming in with temperatures in the 70s and mostly sunny skies.

Dobbs said the number of classic cars at the 2020 Automotion is significantly less than the 1,200 that registered in 2017. Rain has kept attendance lower in recent years.

While she didn’t have a number on spectators, Dobbs said there were fewer but that was OK with coronavirus and rain.

“We just want people to be safe and have a good time,” she said.

Dobbs said several precautions were taken at the event with four hand sanitizing stations on site, over 20 hand washing sinks and food vendors were required to wear masks. Cars were also distanced and vendors were limited, she said.

The awards were also not held this year to limit gathering and instead anyone who preregistered was eligible for prizes.

While hands-on children’s activities were limited, a pedal pull and balloon animals were available. A car corral and swap vendors were available for people to purchase classic cars and items, she said.

Attendees Tim Koch and Nathan Kauffman didn’t even think twice about missing what’s considered one of the biggest events in Wisconsin Dells.

“We didn’t even hesitate to come down. It’s worth the hour and a half drive,” Koch said. “The community is everything about this. I feel at home here.”

“We do this every year,” Schum said. “Get together with friends and we make it an annual tradition.”

He added he felt safe with the precautions the festival put in place to limit the spread of the virus.

Jerry Weisensel, a Madison resident, who tries to attend every year, said “There’s a lot of great people that bring a lot of neat cars. You look at projects they’ve worked on and it’s impressive to see the quality and ingenuity of these car builds.”

It was his third year showing at Automotion.

“The weather is cooperating just like it has in the last three years, it’s raining, cool,” Weisensel, who showed his 1969 American Motors AMX. “It’s usually a fantastic turnout and a lot of awesome cars here.”

Wisconsin Dells' Automotion postponed to September due to COVID-19

Weisensel said he didn’t think the event would get cancelled because he believes the atmosphere with COVID-19 is changing.

“I think people are really anxious to get out and get things done,” he said. “I don’t see a reason to cancel an outdoor event like this.”

Green Bay resident Jeff Batz, attended with his father, Ron, to show off their 1966 Chevrolet Impala. Batz said they were concerned about the rain and the coronavirus, but were taking precautions where they could so they could support the show.

“We know it’s a good show and we want to support it,” Batz said.

Batz said they were social distancing as much as possible. They decided against their traditional father and son breakfast at Mr. Pancake in Wisconsin Dells, and instead opted for the drive thru at Burger King.

“We’re taking precautions where we need to take precautions,” he said.

Tim and Nathan look at cars

Capturing a car close up

Looking at a Messerschmitt

Sauk County’s COVID-19 metrics have improved over the last two weeks even with schools open, but Health Officer Tim Lawther warned that now is… 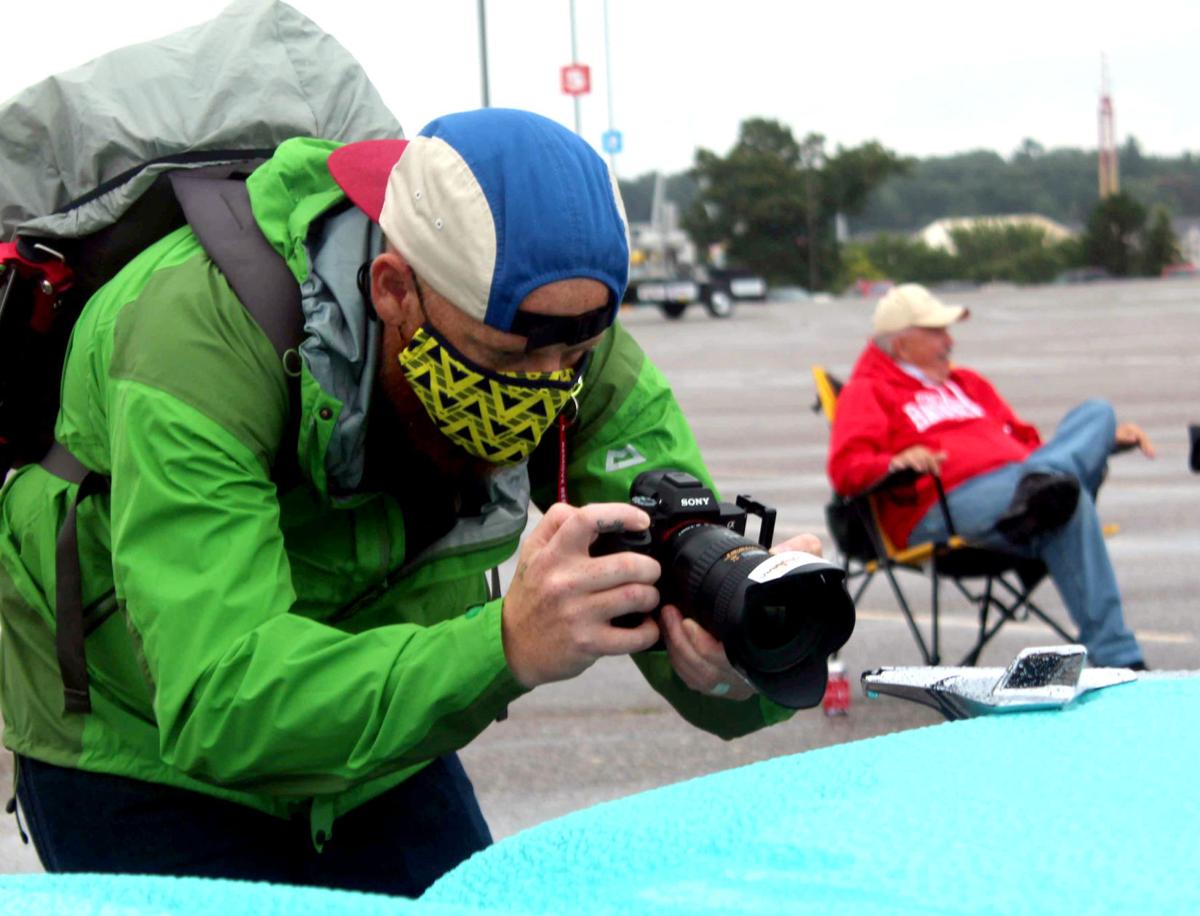 Madison resident Matt Rattcliff takes a picture of an emblem on one of the vehicles on display at Automotion on Saturday. 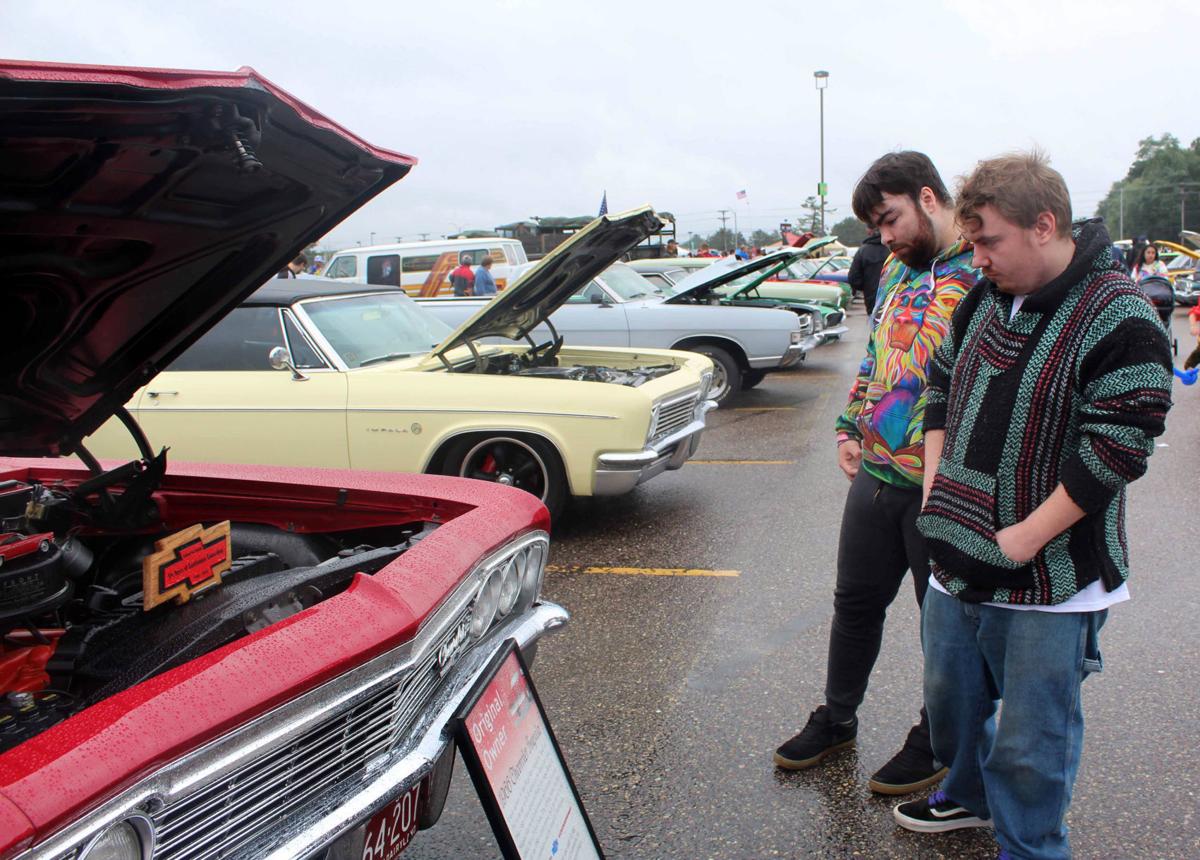 Tim Koch and Nathan Kauffman, both from Wisconsin Rapids, examine a 1966 Chevrolet Impala Saturday during Automotion at Mt. Olympus Water and Themepark in the Wisconsin Dells. The two-day car show still went on despite rain and COVID-19.

Jeff Batz, a Green Bay resident, cleans his car of dust and rain water Saturday during Automotion at Mt. Olympus Water & Theme Park in Wisconsin Dells. Batz father, Ron, also showed his own vehicle of the same make and model.

Madison resident Jerry Weisensel cleans grime from his tires shortly after arriving in Wisconsin Dells for Automotion after driving over an hour to arrive at the event Sept. 12.

Attendees at Automotion Classic Car Show in Wisconsin Dells look at a 1955 Messerschmitt Sept. 12, one of the cars on display at the two-day annual event.