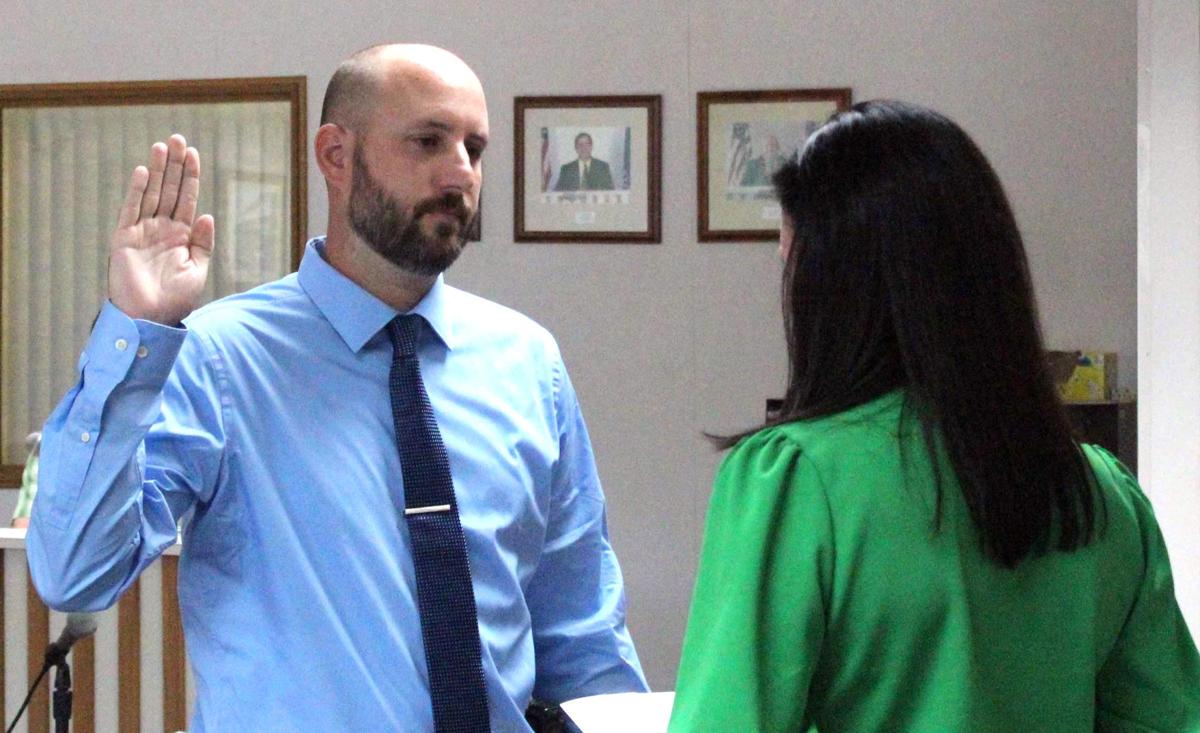 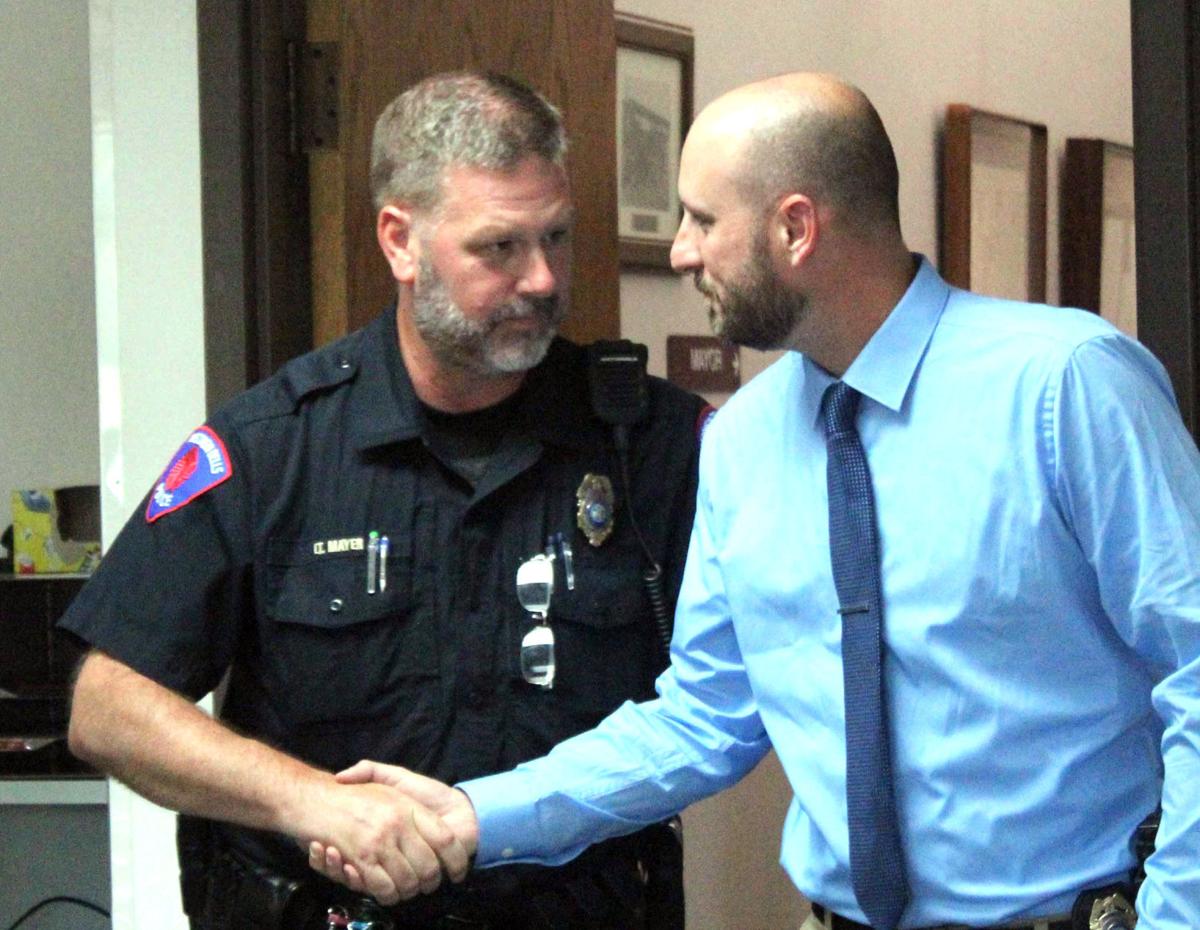 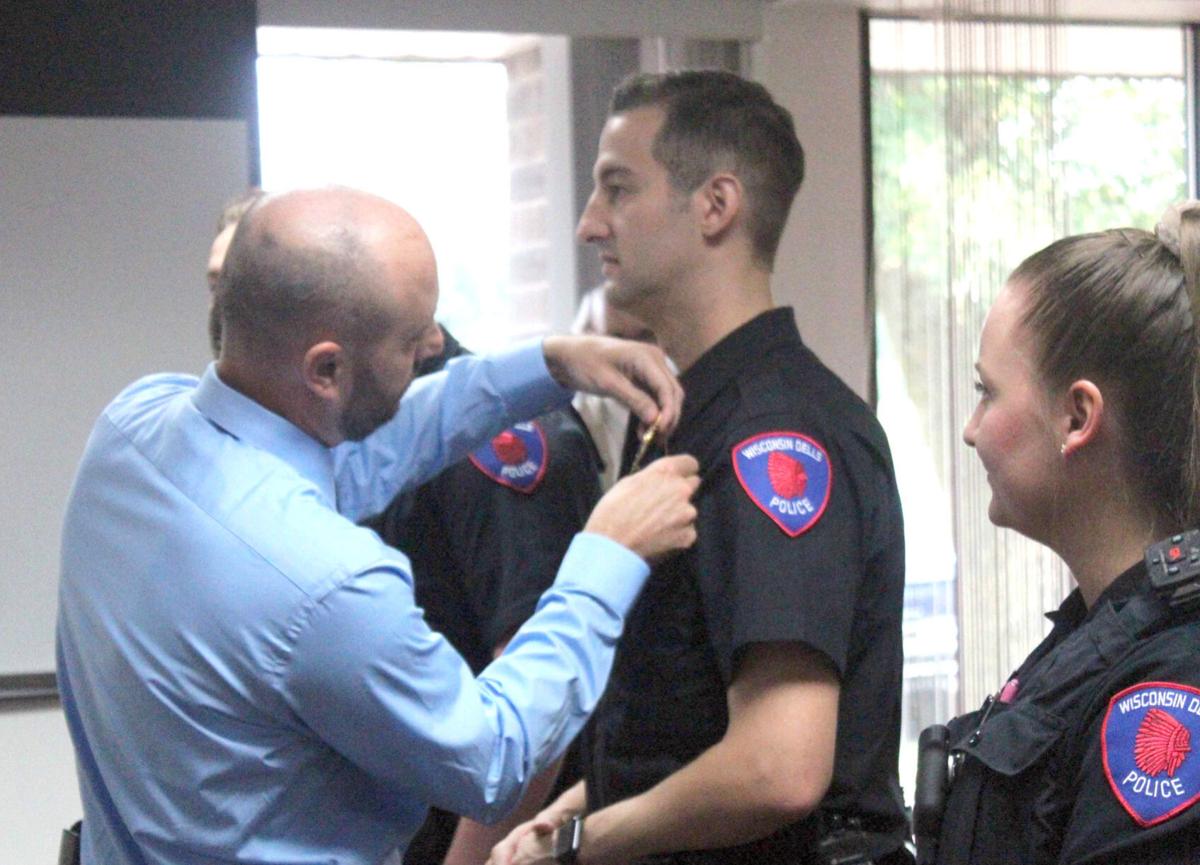 Newly appointed Police Chief Nicholas Brinker pins a Wisconsin Dells Police Department badge on Matthew Hudson, who was one of five police officers appointed by the comon council July 19 to serve on the police department. 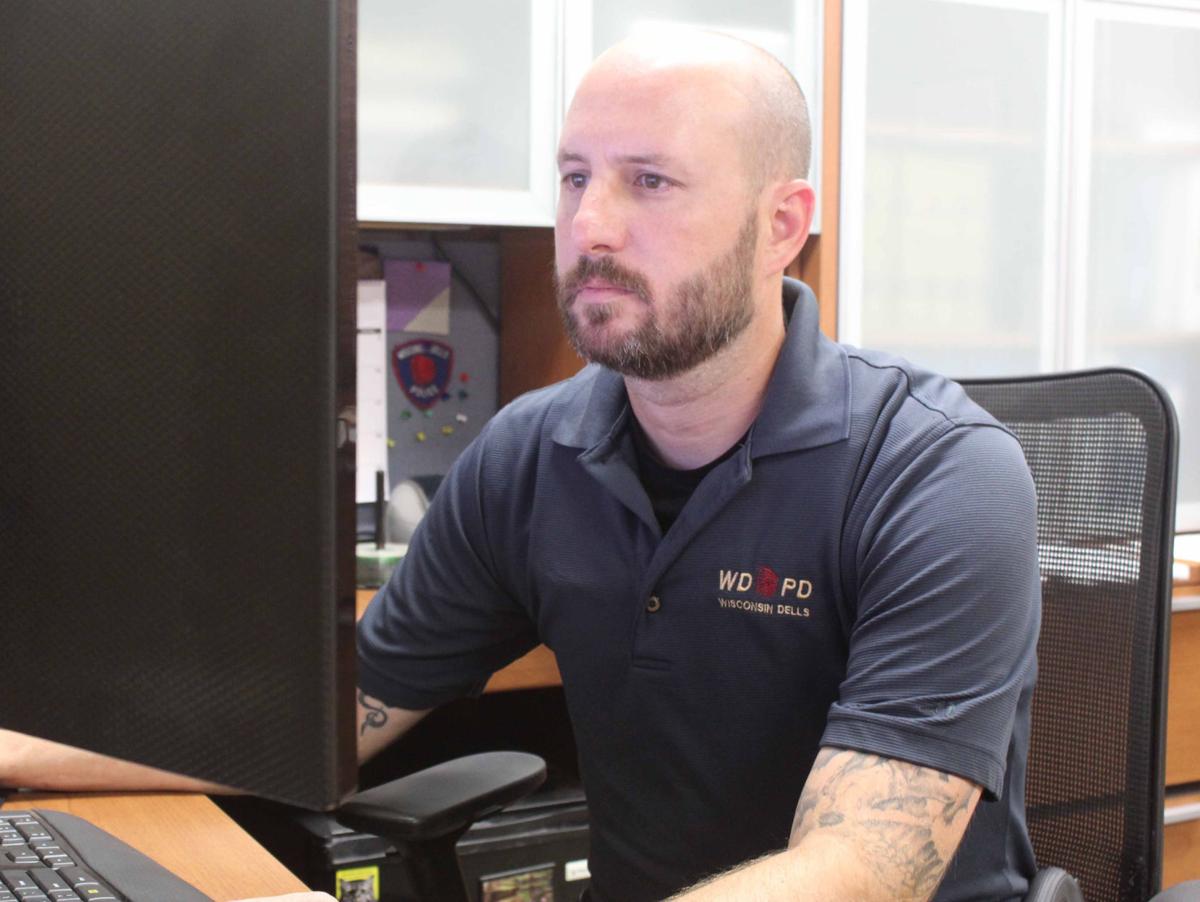 Brinker was sworn in by Clerk/Treasurer Sarah Brown shortly before council members confirmed his appointment.

“We’ve got a very bright future for our department here...” Brinker said. “It’s a great opportunity and I’m thankful for it.”

Brinker graduated from Baraboo High School in 2003. After high school, he served four years in the U.S. Marines from 2003 until 2007. He served two deployments to Iraq and one tour to south east Asia, including Japan, Taiwan and Korea, according to Brinker and Capital Newspapers archives. He reached sergeant rank during his time in the U.S. Marines and was in the infantry, he said.

He graduated from Madison Area Technical College’s criminal justice program and law enforcement academy in 2010, according to documents provided by Administrative Coordinator/Finance Director Karen Terry. He also serves as an emergency response team member with the Columbia County Sheriff’s Office.

Brinker started as a summer foot patrol officer in 2010 before being hired full-time by the Wisconsin Dells Police Department in 2011. He was promoted to patrol sergeant in 2013.

Brinker said his experience in both the military and with the police department brings managerial and and leadership skills necessary for his new role.

Brinker is eyeing some goals as he begins to take command of a city police department in a tourism area that sees around four million visitors annually. One of the goals he said he hopes to tackle is obtaining a full staff.

Brinker also hopes to revive the department’s community programs, like the “You Are Not Alone Program,” where city police department dispatch reaches out to elderly community residents to check on them daily. Another program Brinker said he hopes to restart is the Community Assigned Police Program where each officer is assigned a sector of the city to check on residents. The program was started by Ward, Brinker said. He said the department hasn’t had time in recent months to implement the program due to staffing issues.

“We’re such a unique community in that we have our residential population but day to day we have so many visitors and all to often I think some of our residents get left on the back burner,” Brinker said. “As police officers, we’d be better reaching out to our residents in our community.”

Brinker said he wants the public to know the Wisconsin Dells police officers are well trained to serve the public.

“The majority of us are here for the right reasons and I’m proud to say the men and women I work with I don’t have concerns about those types of issues,” he said. “We are a well trained department and we’ve got a lot of talent here and lot to is our community outreach is being transparent with the public and communicating with the public what we are doing and what our attentions are. I think we have a great community for that in Wisconsin Dells.”

Mayer said July 20 Brinker is the best pick for the job to lead the Wisconsin Dells Police Department.

“His background and his ability to understand the public need goes without saying he is definitely the best pick for this job,” Mayer said. “Nick’s ability to just automatically take on a leadership role is really what makes him the best person for this job.”

When he’s not working, Brinker enjoys pheasant hunt and wood working. He has been married to his wife for 14 years. He has no children but has two dogs, a chocolate lab and a German Sheppard.

A company has been selected for infrastructure repairs on Elm Street in Wisconsin Dells.

A revaluation of citywide property after more than a decade prompted owners to seek adjustments after an average 25% increase in home assessments.

LAKE DELTON — Village police officers will receive a raise over the next three years.

Newly appointed Police Chief Nicholas Brinker pins a Wisconsin Dells Police Department badge on Matthew Hudson, who was one of five police officers appointed by the comon council July 19 to serve on the police department. 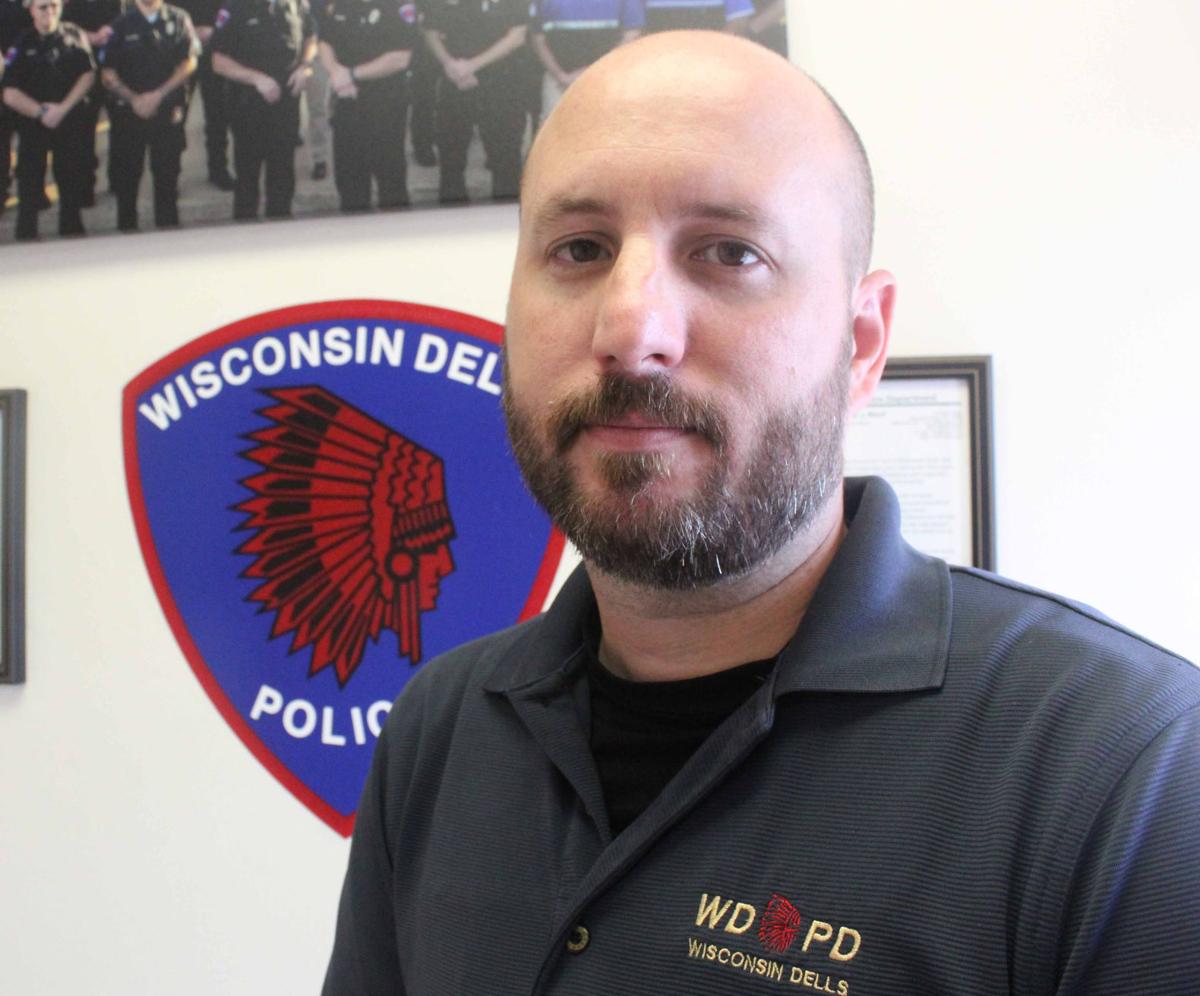