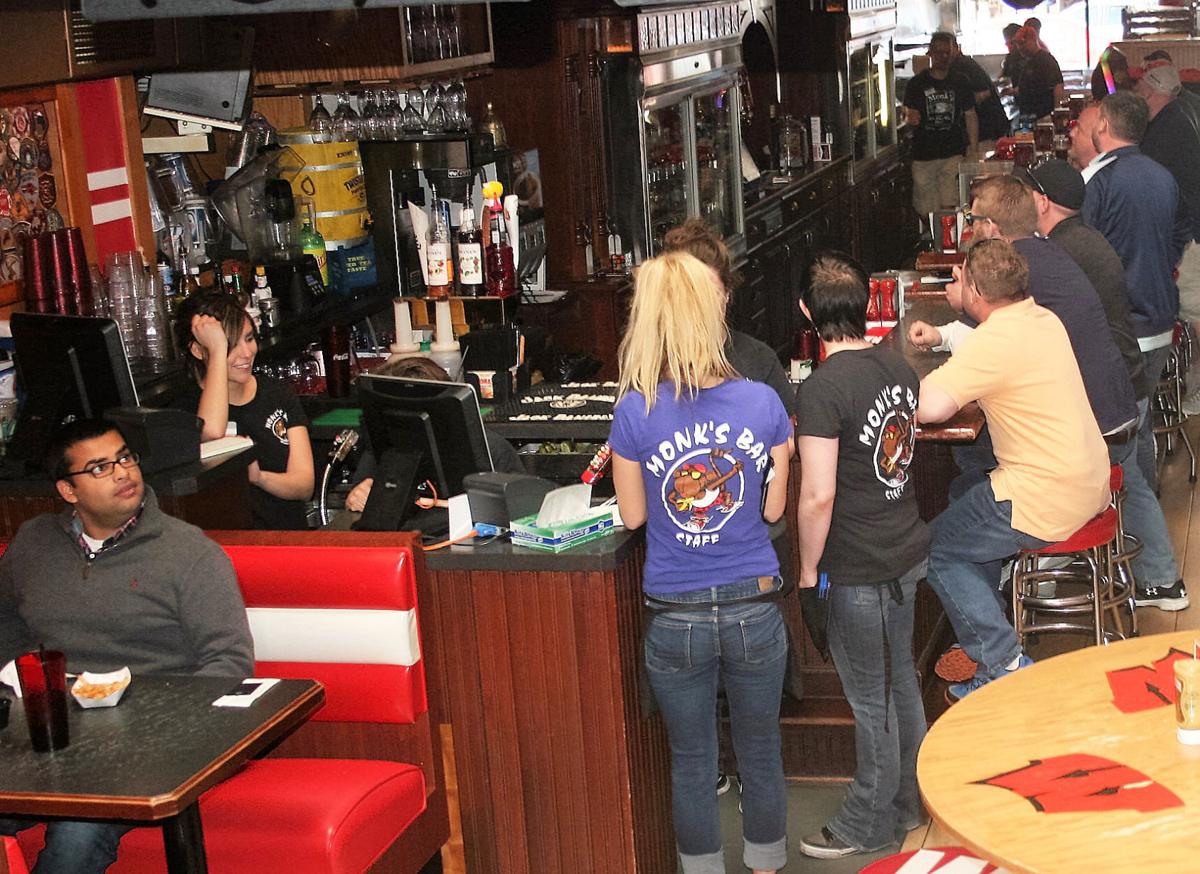 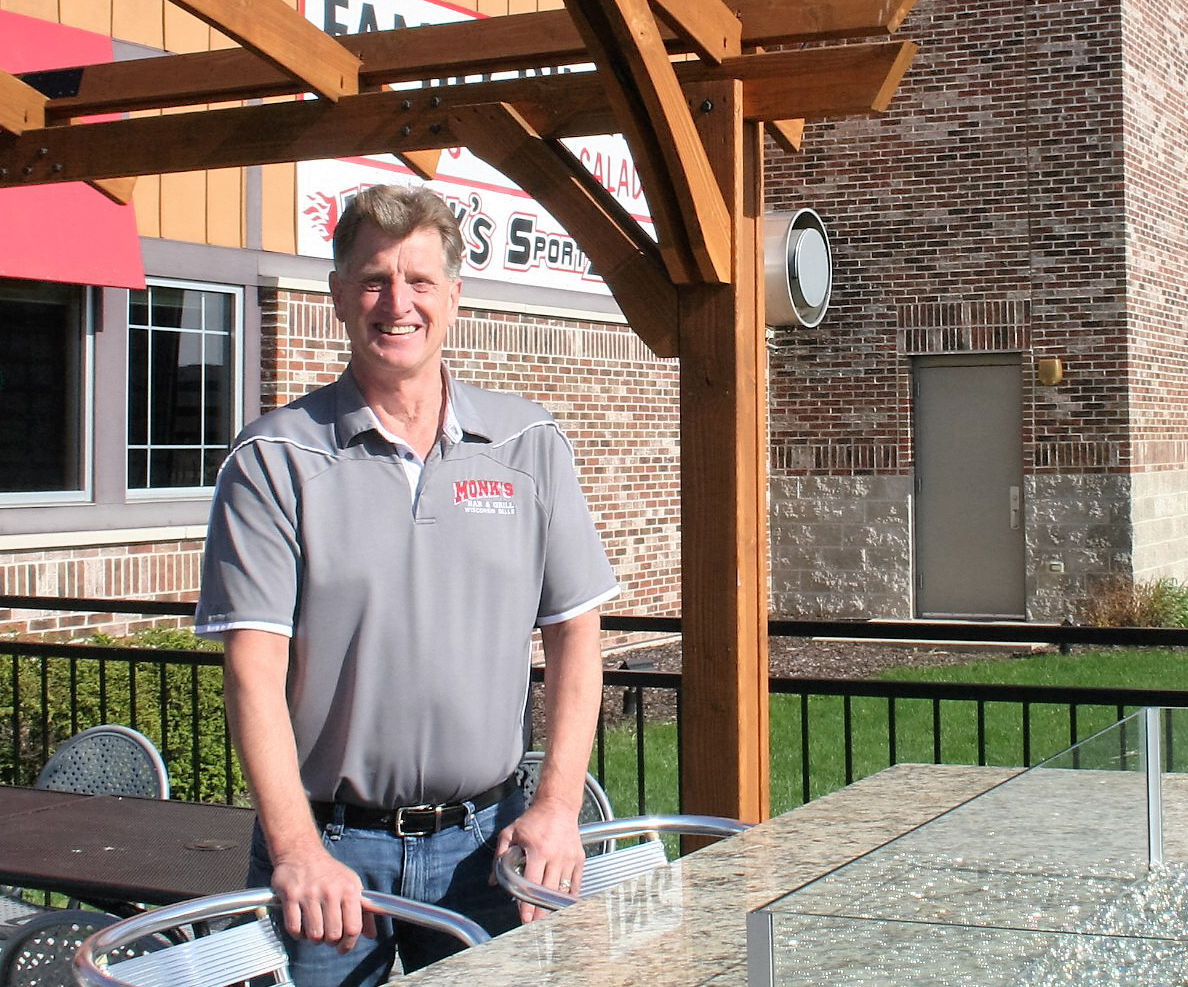 Tom Heller's stands before the newest Monk's at the Wilderness, a vast building that has the "original Monk's feel" with a lower level created to house live entertainment and a large banquet facility with an extended menu. This location also offers a extensive outdoor area with an relaxing area to converse.

The renown Monk’s Bar and Grill is celebrating its 70th Anniversary.

Monk’s was started in 1947 by Gustave or “Monk” Heineke and his wife Helen and was bought by Tom and Jane Heller who have continued on with the traditions set before them. This 70th Anniversary also commemorates the Heineke’s ownership of 35 years and the Heller’s ownership.

Since 1982, Tom and Jane Heller have expanded the menu. The original menu consisted on hamburgers, cheeseburgers, ham and cheese sandwiches, liver and sausage and onions on rye, potato chips, canned soda and a full bar. The current menu, which has over fifty items, includes burgers and an elaborate children’s menu served on bright red frisbees.

Tom Heller credits the people; both staff and customers for being great.

“Staff is a number asset; a good and friendly staff will always take good care of your customers,” he said.

The original downtown Monk’s location is full of historic Badger photographs and other memorabilia. The Heineke’s sons, Jim and John, both played football for the Badger’s in the 1950s. They can hold over 100 people, in the three-story downtown location at 220 Broadway. The Monk’s at the Wilderness location has a capacity of over 650 people. They continue with the “original Monk’s feel” and have added a lower level dedicated to entertainment and special banquets serving a menu of steaks and twice baked potatoes and hosting unique performers in the beautiful yet intimate feeling lower facility that has included national acts. The newer Monk’s location also offers a beautiful outdoor seating area to relax in.

“Monk’s 70th Anniversary is great.” said manager of the Downtown Monk’s location Nick Novinska “My father grew up in Wisconsin Dells and knew Monk and his sons Jim and John. He took them fishing and had my dad help around Monk’s. This location is great, there is so much history on the walls. Jim and John both played with the Badgers. This anniversary is extra special with the Heineke’s and Heller’s each having 35 years of running Monk’s. The Heller’s have continued the tradition and people appreciate it. The Heller’s know how to treat people. Monk’s is a great place to be.”

The Park’s family has been coming to Monk’s for decades; making it a family tradition. Homer Parks grew up just outside of the Wisconsin Dells and his son Chris has been going with his father to Monk’s since he was a child and they now return as often as possible said Chris and his wife Molly.

“Monk’s is great. It has been one of our favorite places to come for years. We drove two and a half hours and plan on coming here, each time we are in Wisconsin Dells.” said Chris Parks

“We have been coming here a long time, I have been enjoying this food since the mid-sixties. I have brought Chris since he was a child. Monk’s is a staple, when we come to the area.” said Homer Parks.

The Downtown Monk’s location will be celebrating with specials, April 24 through April 27. It will have buy one burger get the second one for 70 cents. The 1947 start also brings drink special from 4-7 two dollar beers and three-dollar rail drinks.

All six locations; the downtown Monk’s location, the Wilderness Monk’s location and the three in the Madison area and one in Eau Claire will celebrate the 70th anniversary with giving 47% of the gross sales from Wednesday April 26th to local food pantries.

“Wisconsin Dells is a great place to raise kids; it has a great local population along with great tourists.” Heller said “I don’t think I could have asked for a better opportunity. It has been great to carry on the tradition of the Heineke’s. Monk’s is a great place, we are excited for the 70th Anniversary.”

Tom Heller's stands before the newest Monk's at the Wilderness, a vast building that has the "original Monk's feel" with a lower level created to house live entertainment and a large banquet facility with an extended menu. This location also offers a extensive outdoor area with an relaxing area to converse.