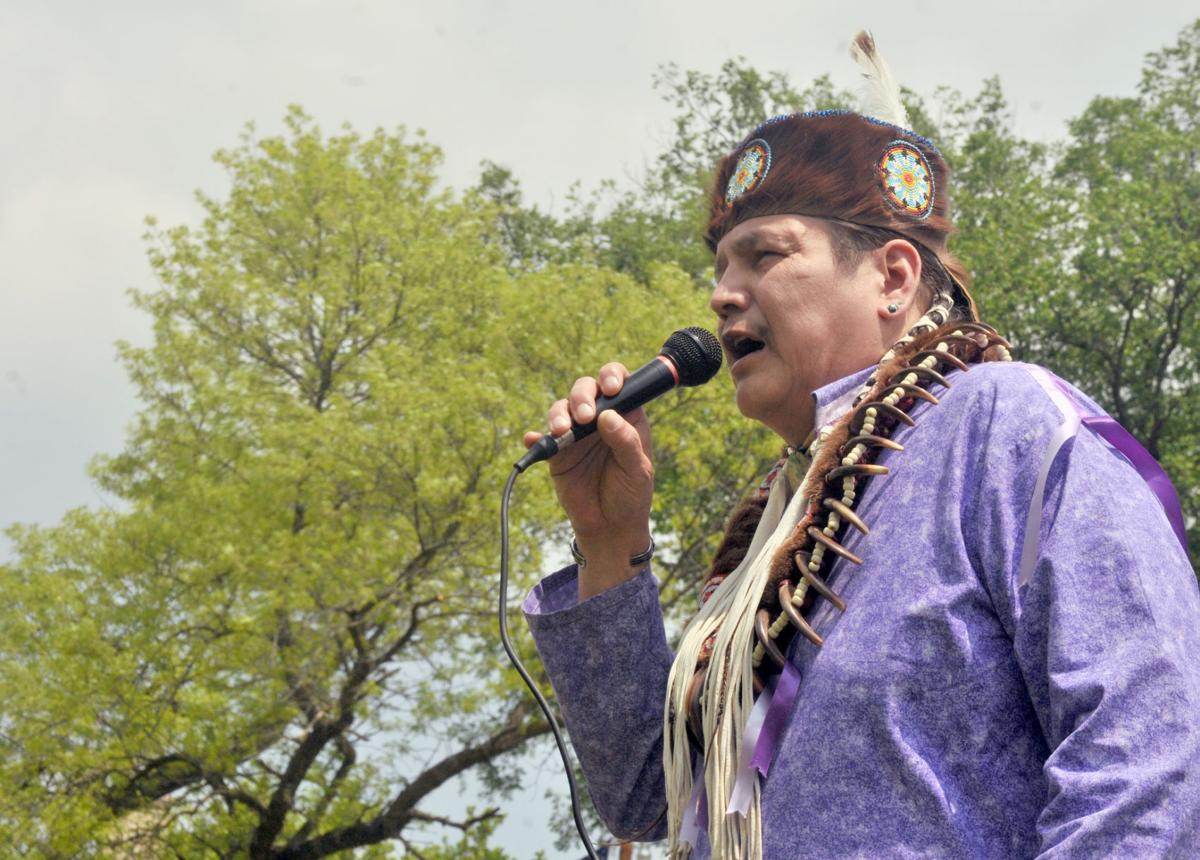 Elliott Funmaker Sr. of Prairie du Sac speaks during the 2013 opening of the Historic Indian Agency House in Portage. Funmaker said it was important for historic documents on display to include the perspective of Native Americans. 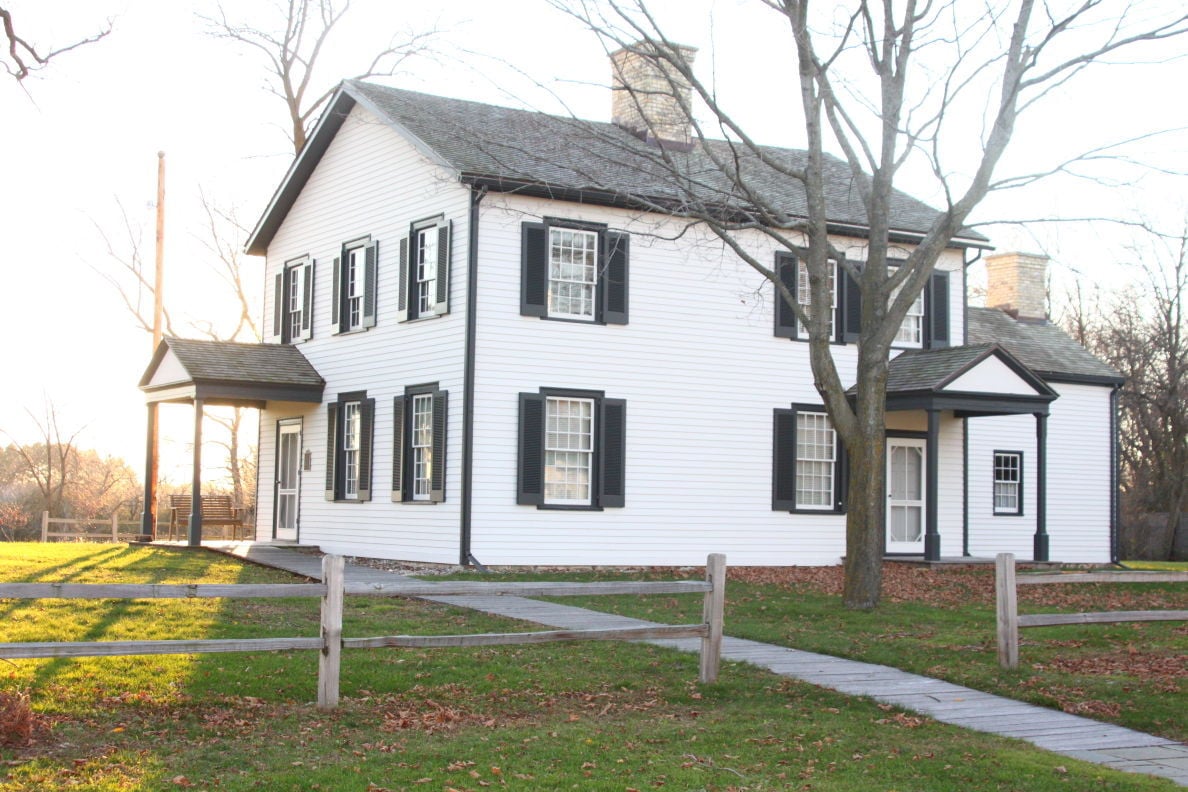 The Indian Agency House in Portage was built in 1832 and is one of the oldest homes in Wisconsin. 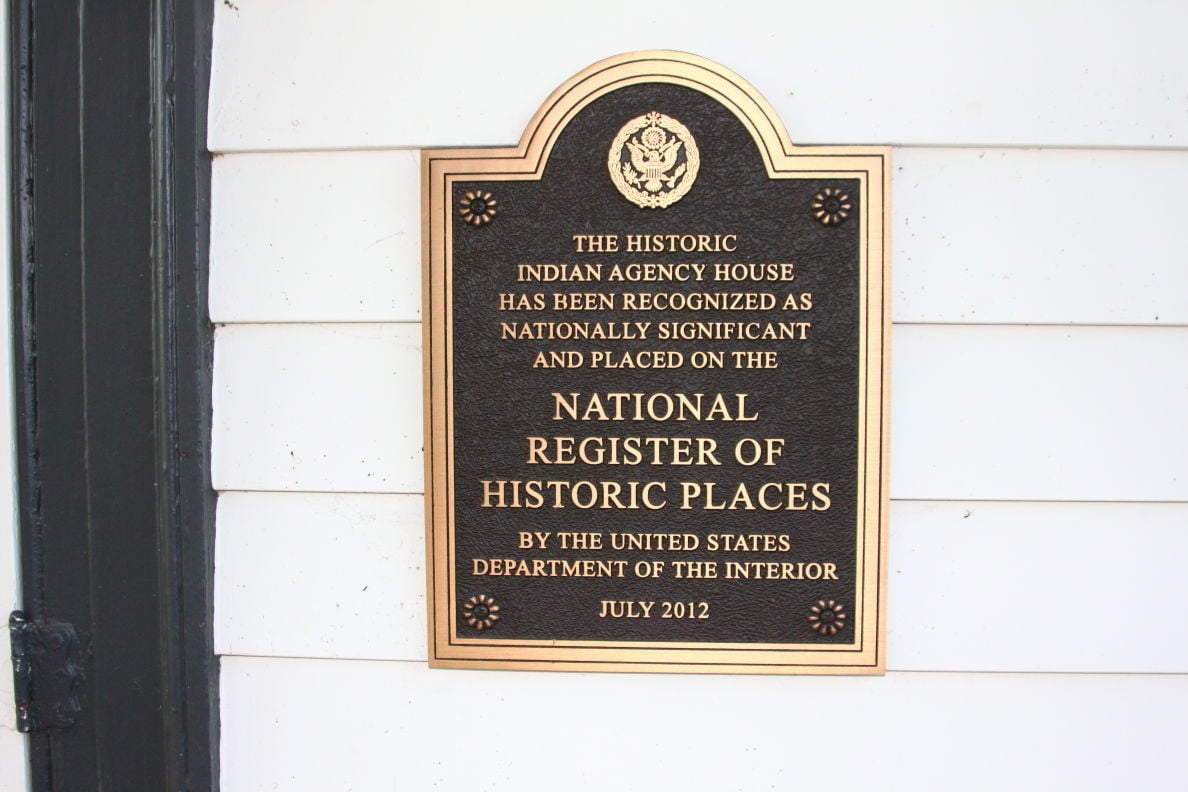 The Indian Agency House in Portage, more than 180 years old, was put on the National Register of Historic Places in 2012. 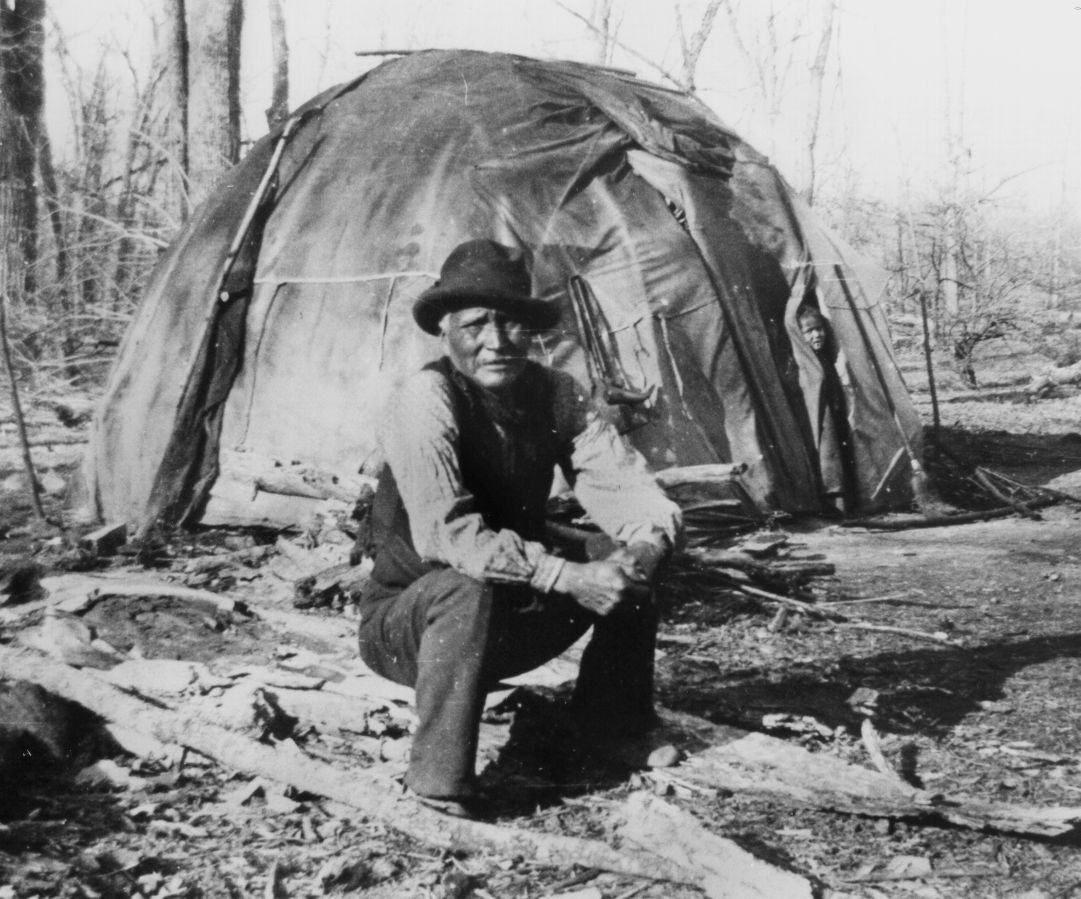 This native settlement was built along the Baraboo River in Babb’s Woods in the late 1890s. 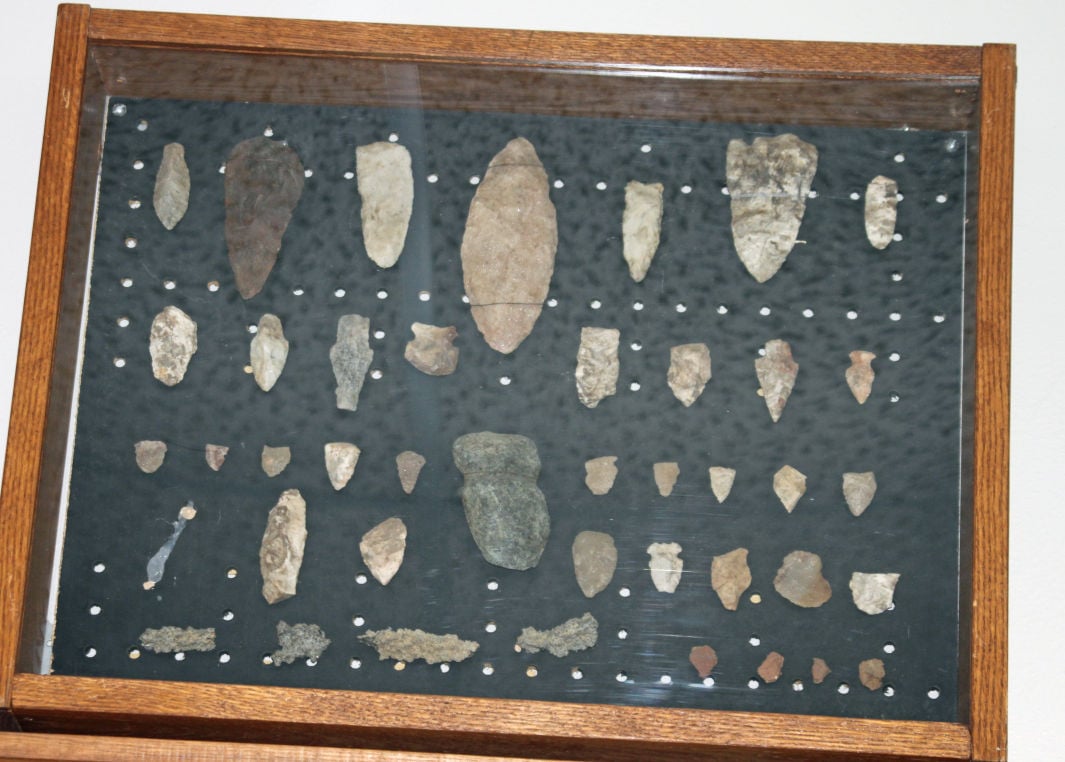 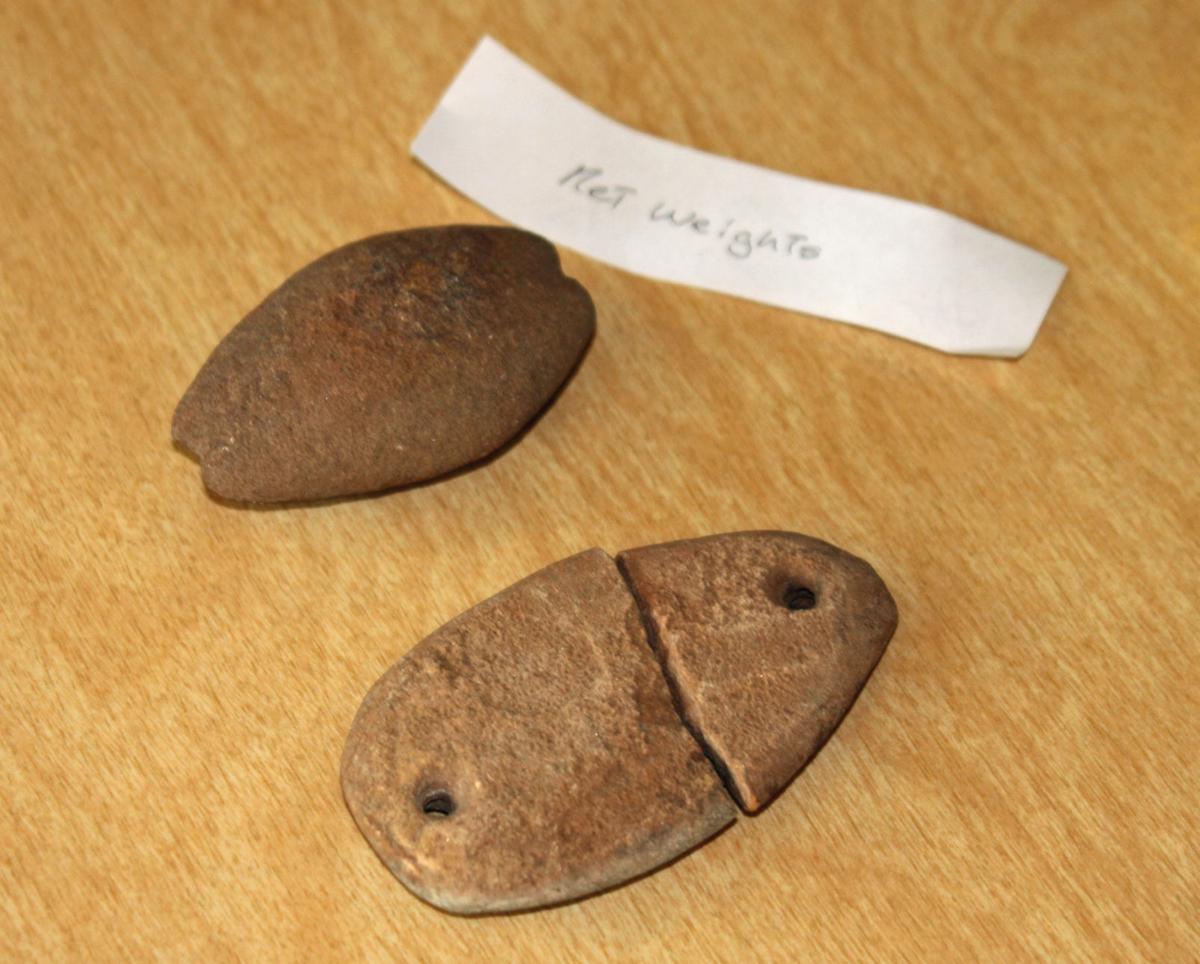 The New Lisbon library will showcase its vast collection of Indian artifacts when it opens its new history wing as part of the library’s expansion project. 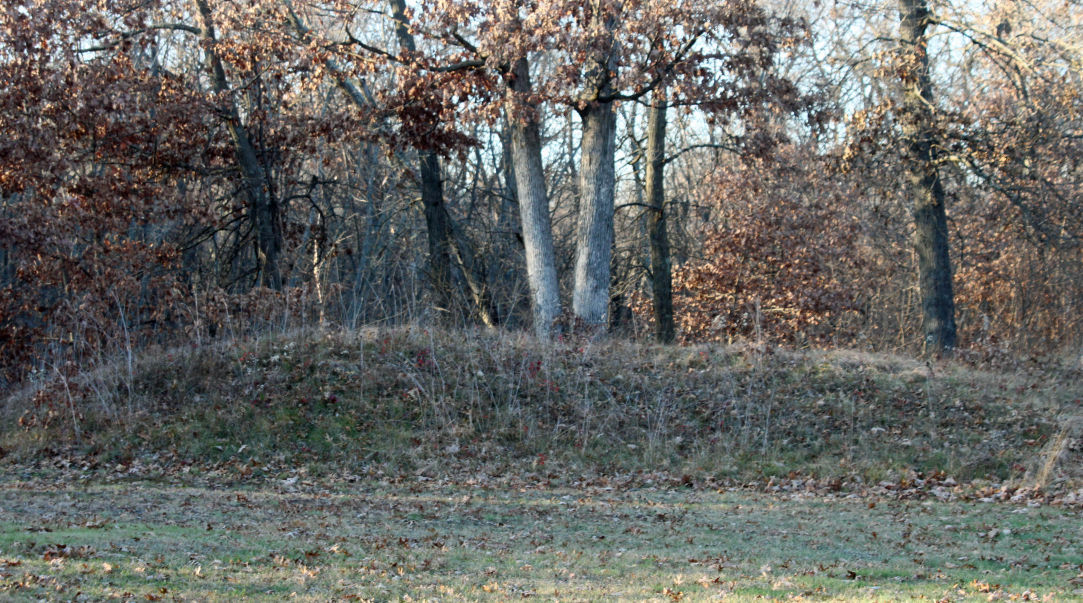 These ancient Native American mounds are located just south of New Lisbon and are on the National Register of Historical Places.

Centuries before Wisconsin Dells became a tourist hub and the I-90-94 corridor roared through Juneau, Sauk and Columbia counties, the land we now call the Dells, Mauston, Portage, Baraboo and the Sauk Prairie area was filled with Ho-Chunk, Potawatomis, Sacs and Foxes — among others.

For thousands of years, natives lived off this beautiful area of marshes, bluffs, hills and rivers.

Native Americans left an indelible mark on south-central Wisconsin and many dedicated descendants are still working hard today to preserve that legacy.

The Ho-Chunk spread their territory from Lake Winnebago through Columbia and Juneau counties, while the Sacs and Foxes developed their home on the western bank of the Wisconsin River, home to present day Prairie du Sac and Sauk Prairie.

It’s believed the Sacs and Foxes settled this area in the 1730s and were often in conflict with the French who occupied Wisconsin at the time. In 1766, Capt. Jonathan Carver visited the Sac village and marveled that it was the best Indian village he had seen. Carver described the homes and streets being so neatly organized and well kept that it appeared similar to a white settlement. The Sacs were known as a very industrious, efficient tribe.

Eventually, in 1783, the Sacs moved south to the confluence of the Rock and Mississippi rivers. However, some returned for the Battle of Wisconsin Heights during the Black Hawk War in 1832.

In an article from 1906 that appeared in both the Baraboo Daily News and the Baraboo Weekly News, Verne S. Pease stated it was “six weeks of hysterics among the white settlers.” The Battle of Wisconsin Heights was waged on the bluffs across the Wisconsin River from Sauk City. But, Black Hawk’s brave group couldn’t withstand the bloodshed, especially after U.S. forces killed hundreds of Sauk and Potawatomi at the mouth of the Bad Axe River in southwestern Wisconsin. Black Hawk eventually surrendered to an Indian agent at Prairie du Chien.

Early American history is filled with unfortunate accounts of white settlers driving Native Americans — sometimes forcibly — from the land they called home for centuries. However, one Winnebago family was spared from deportation more than 140 years ago thanks to several passionate and loyal residents in Reedsburg.

On Dec. 26, 1873, a detachment of 51 U.S. troops led by Capt. S.A. Hunt traveled to Reedsburg from Sparta, with the direct orders to remove the family of chief Ah-Ha-Cho-Ka, also known as Blue Wing, from their village to a reservation in Nebraska. Ah-Ha-Cho-Ka’s family was well respected members of the Winnebago tribe for many years in the Reedsburg area. While several other Winnebago tribesmen had been captured a couple of days earlier near Portage, with the support of white villagers in Reedsburg, Ah-Ha-Cho-Ka’s family wasn’t going anywhere.

According to an article by Sauk County Historian Bill Schuette that appeared in the Reedsburg Times-Press, Blue Wing had welcomed early white settlers to Sauk County and was known for his “good nature, kindness and integrity.” He was known for being fair and often was treated as a guest of white settlers upon their arrival to Reedsburg. Blue Wing was a U.S. citizen and landowner.

Despite Blue Wing’s local status, Hunt and his soldiers began rounding up Winnebagos, including the chief’s wife, children and grandchildren. Outraged, the citizens of Reedsburg obtained a court order for their release, and Sauk County Deputy Sheriff H.D. Buel led a group of angry citizens to the Reedsburg train depot where Capt. Hunt and his men were ready to transport the Winnebagos out of state.

According to a report in the Jan. 2, 1874, Reedsburg Free-Press, officers were prepared to ignore the local court order until they realized how passionate the crowd that had gathered were to keep the family in Reedsburg. After a fair hearing was conducted, Hunt and his posse relented, and Blue Wing’s family stayed in Sauk County. As Schuette recalled in his article, “the heroic actions of Reedsburg’s citizens that day helped, in part, to convince the U.S. government to abandon its inhumane policy of Indian relocation.”

While more than 140 years have passed since the Reedsburg incident, Schuette believes it was a unique moment that showed the value of Native American tribes in Sauk County during a time when many were being driven off their land to reservations far from home.

Despite many natives being driven away from the local area, their impact remains. Their names and culture can be found in almost any direction one looks.

From the days of explorers Jacques Marquette and Louis Joliet, Europeans and Native Americans built a long history in Portage, dating back to 1673. Marquette and Joliet “portaged” over the area between the Fox and Wisconsin Rivers to reach the mighty Mississippi. However, it wasn’t until 1832 when the U.S. government established the Indian Agency House in Portage to foster relations between white settlers and the Ho-Chunk Nation (Winnebagos at that time).

The Indian Agency House, built in 1832 for Indian Agent John Kinzie and his wife Juliette, still stands in its original spot, “the portage” between the Fox and Wisconsin. The Kinzies only lived there from 1832-34, but Juliette documented the couple’s days at “the portage” in her memoir “Wau-Bun, the ‘Early Day’ in the Northwest.”

The house, built in the federal style popular in the early 1800s, is one of the oldest in Wisconsin. It’s been outfitted with household items and furnishings from the 1830s and the home is open for guided tours every year from May to October. The historic home was restored by the National Society of Colonial Dames of America in 1932 for its 100th birthday and, in 1972, was placed on the National Register of Historic Places.

Portage’s historic Indian Agency House serves as an important link to a time when Wisconsin was still largely inhabited by native residents.

As director of the New Lisbon Memorial Library, Deanna Laufenberg couldn’t have asked for a better gift.

With the library set to expand and add a history wing in the spring of 2016, Laufenberg received a donation from the Harry Mortensen family that took years to collect but is several thousands of years old. During the 1960s, Mortensen collected more than 12,000 Native American artifacts, dating from 500 to 1,200 A.D.

Mortensen’s collection includes many ancient tools: arrowheads, spear points, scrapers, knives, axe and hammer heads, including bits of earthenware pottery. The artifacts are believed to have originated from the Woodland people, the first humans to roam Juneau County more than 1,000 years ago.

At one time, most of Juneau County, and much of Wisconsin, was covered by a huge glacier. As the Ice Age ended, the glacier melted, forming a large lake, known as Lake Wisconsin. However, the vast lake drained and formed the Wisconsin River about 12,000 years ago. After Lake Wisconsin drained, the Woodlands, a nomadic tribe, filtered into the area, hunting, farming and gathering. They left behind plenty of items and Mortensen discovered a treasure trove of native tools. With more than 4,000 pieces — all found in Juneau County — it’s one of the largest personal collections in the state.

Mortensen’s goal was to keep his vast collection in Juneau County and give future generations the opportunity to enjoy artifacts from a time when Wisconsin looked very different from the state we know today. Eventually, by the time the first Europeans explored Wisconsin in the mid-1600s, the Woodland had divided into separate tribes such as Menominee, Ho-Chunk (also known as Winnebago) and Chippewa.

Laufenberg said he thinks some of Harry Mortensen’s collection is more than 10,000 years old. One of the most unique items among the artifacts is a fragment of melted sand, hardened after a lightning strike and preserved for centuries.

Laufenberg said the native collection can serve as an educational resource, especially after the library finishes its expansion project.

The library isn’t the only place in New Lisbon to find ancient native history. New Lisbon Indian Mounds Park, also known as Gee’s Slough Group, is located on Indian Mounds Road, a few miles south of New Lisbon on Highway 12 and 16. The park features several rolling burial mounds and the sacred native landmark was placed on the National Register of Historic Places in the 1970s.

The mounds consist of three conical, two linear and one dumbell mound, along with a unique effigy shaped like a running panther. Gee’s Slough Group once had seven additional mounds that were destroyed.

The mounds near New Lisbon are owned by the local Lions club, which maintains the historic site. The Town of Armenia also features several effigy mounds, along with Mauston and several other spots in south central Wisconsin.

Pease theorized in an early newspaper account that the ancient mounds were built by natives that pre-dated tribes such as the Sacs, Foxes, Potawatomis, Menominees and Chippewas because these tribes immigrated from Canada in more recent centuries.

Natives of Juneau County left their mark in other ways, too. Near Hustler, ancient petroglyphs are etched into the stone along Twin Bluffs and the bluff at the mouth of the Lemonweir River. The pictorial etchings (one resembles a thunderbird) are believed to have been carved by the Winnebago Ho-Chunk tribe between 100 B.C. to 1650 A.D.

From Necedah to Prairie du Sac, the rich history of Native Americans in south central Wisconsin is evident. However, the impact of native art …

From Necedah to Prairie du Sac, the rich history of Native Americans in south central Wisconsin is evident. However, the impact of native art …

From Necedah to Prairie du Sac, the rich history of Native Americans in south central Wisconsin is evident and the impact of native art and cu…

Elliott Funmaker Sr. of Prairie du Sac speaks during the 2013 opening of the Historic Indian Agency House in Portage. Funmaker said it was important for historic documents on display to include the perspective of Native Americans.

The Indian Agency House in Portage was built in 1832 and is one of the oldest homes in Wisconsin.

The Indian Agency House in Portage, more than 180 years old, was put on the National Register of Historic Places in 2012.

This native settlement was built along the Baraboo River in Babb’s Woods in the late 1890s.

The New Lisbon library will showcase its vast collection of Indian artifacts when it opens its new history wing as part of the library’s expansion project.

These ancient Native American mounds are located just south of New Lisbon and are on the National Register of Historical Places.