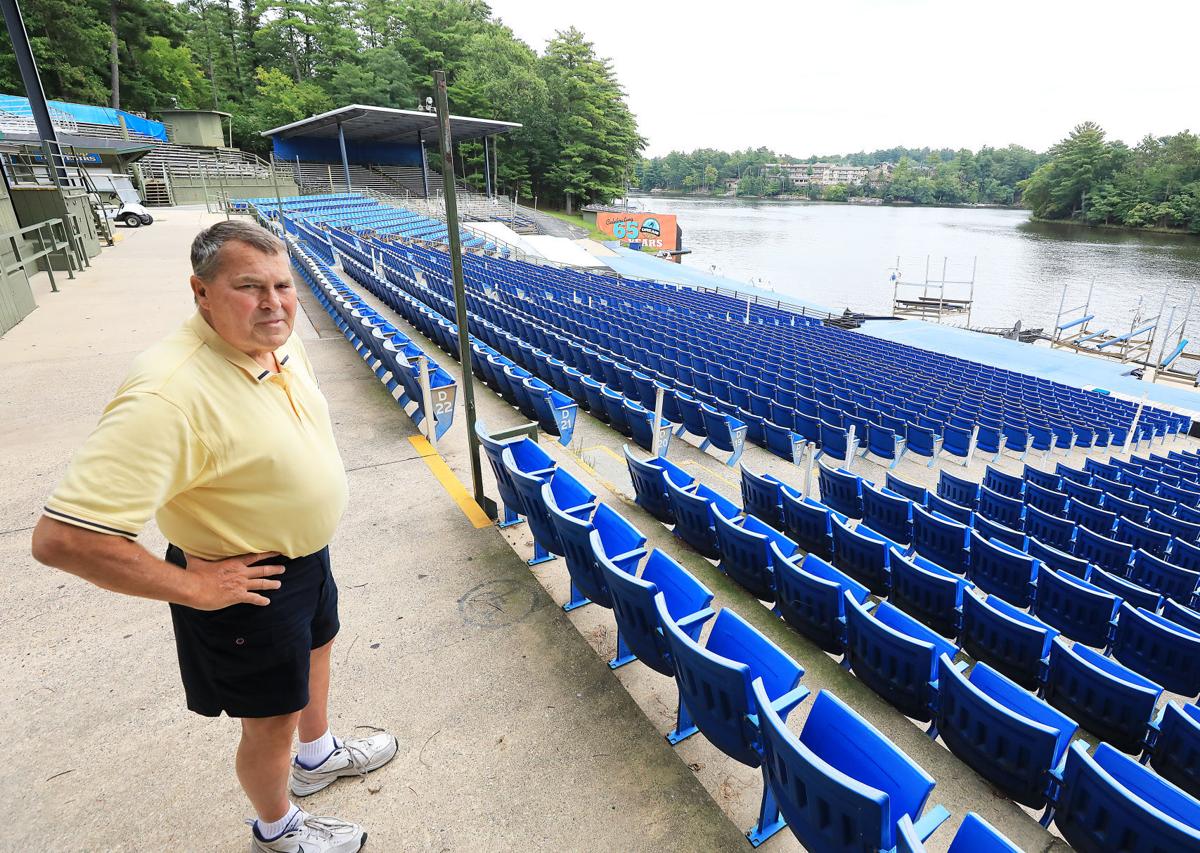 Tom Diehl, president of Tommy Bartlett Inc., looks over the vacant amphitheater of the company's water ski show in Wisconsin Dells on Wednesday. After losing the 2020 season to the COVID-19 pandemic, Diehl said that the show portion of the business will be permanently closing after a 69-year run. 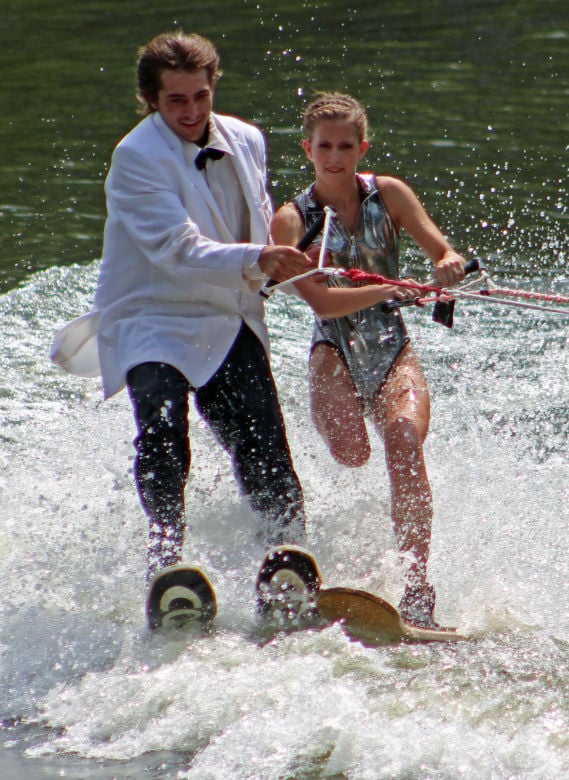 Kayla Garner and Eric Schroeder ski during the Tommy Bartlett Show Aug. 22. It was Garner's first time skiing in front of an audience. 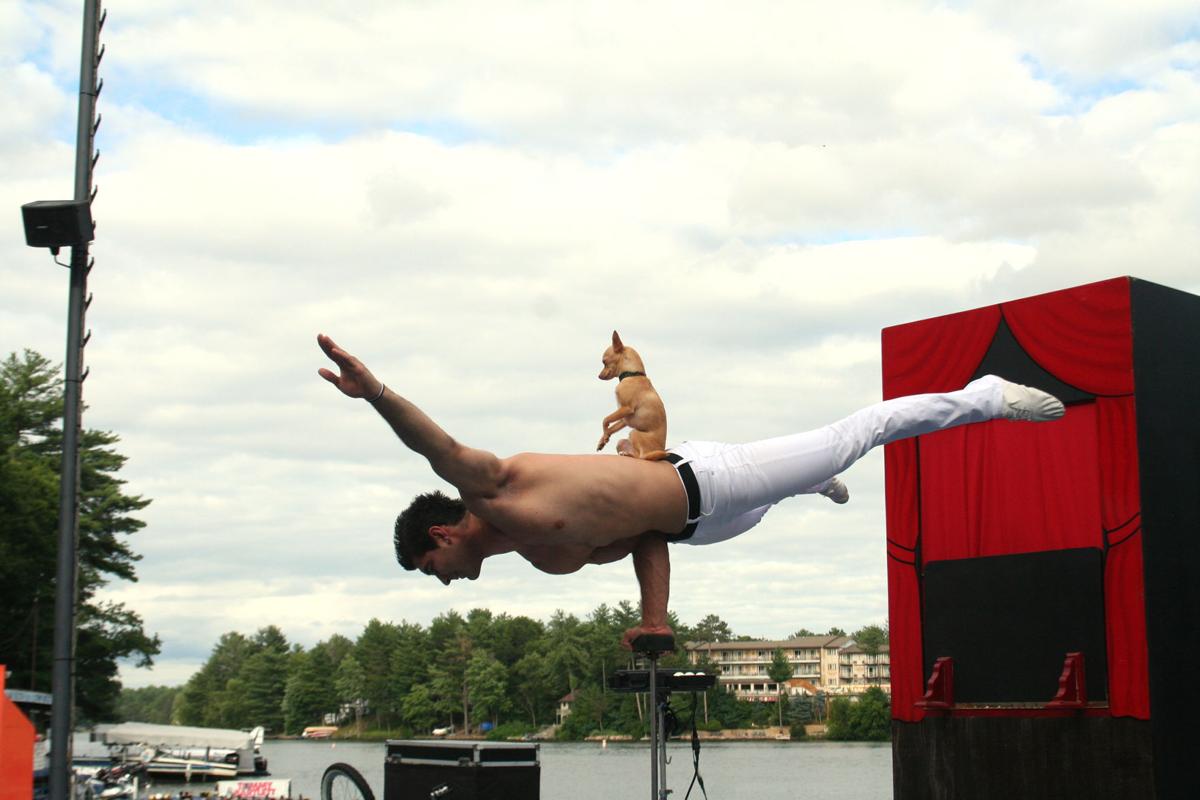 Scooby and Christian known for run on TV's 'America's Got Talent,' perform at the Tommy Bartlett Show. 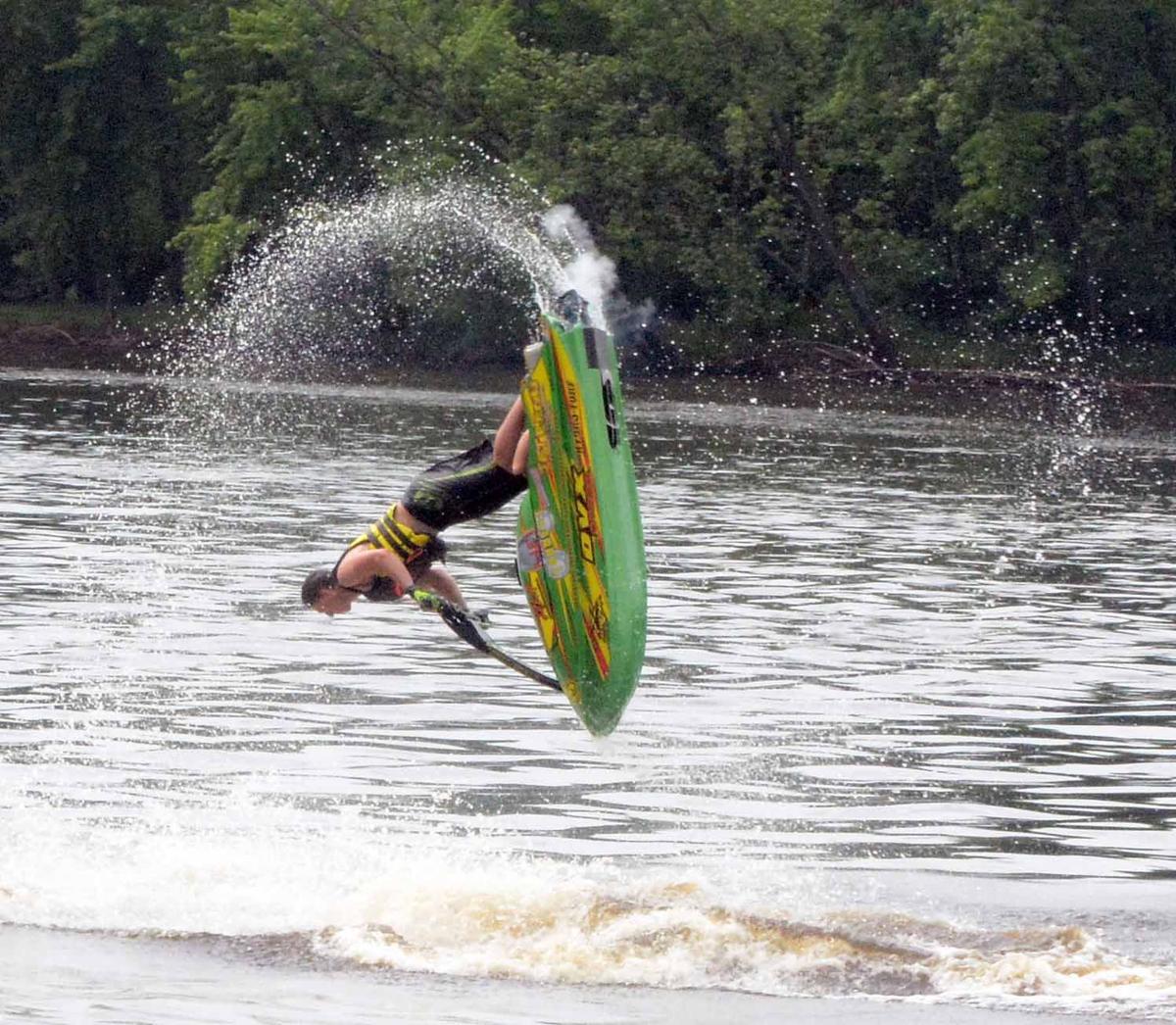 A Tommy Bartlett Show performer does tricks on a jet ski. 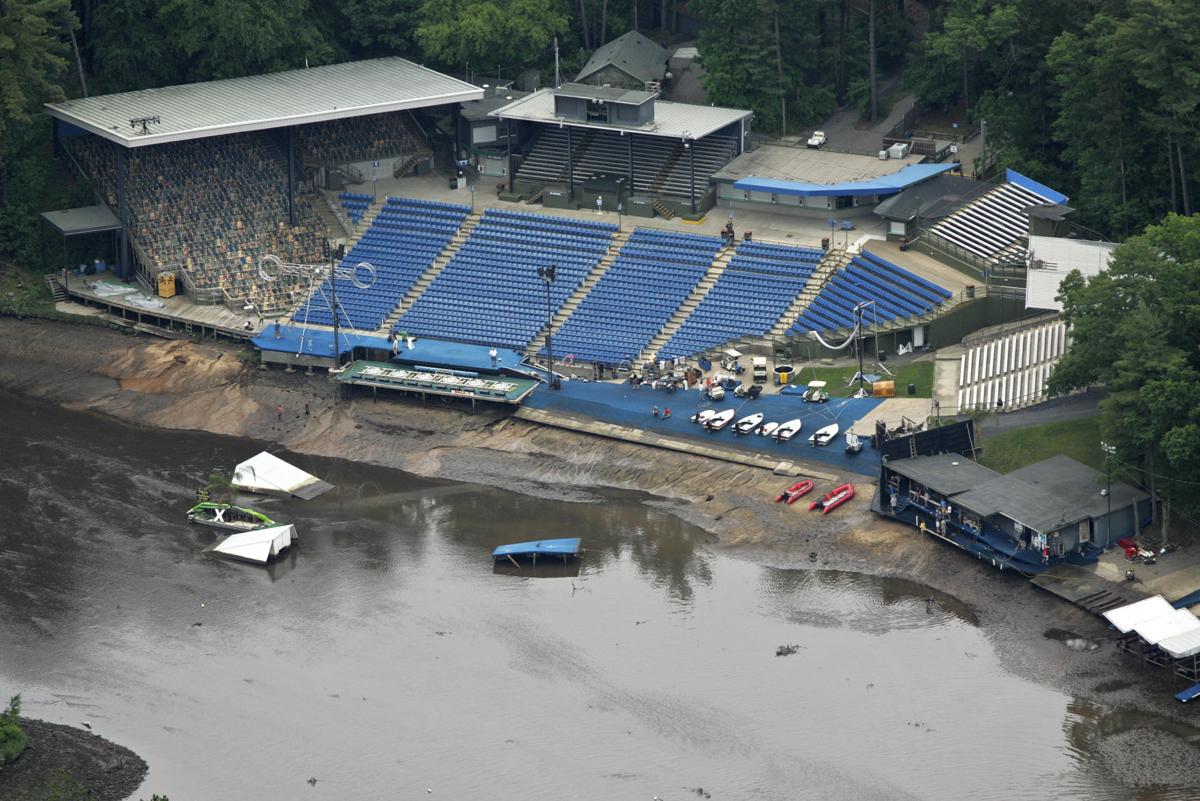 The stage area for the Water Ski shows put on by Tommy Bartlett on Lake Delton sits on the lake bottom after floodwaters breached the bank and drained the lake June 9, 2008.

Tommy Bartlett Show owner Tom Diehl said the water ski ski show has “withstood the test of time” during its 70 years of operation along Lake Delton. However, it couldn’t withstand the obstacles the COVID-19 pandemic presented.

The show announced Wednesday it would remain closed permanently. The Tommy Bartlett Exploratory will continue to operate. Diehl said the show would have “continued to be a viable attraction” in the Wisconsin Dells area if not the for coronavirus pandemic.

The business was based on advice Bartlett himself gave to Diehl, who started working at the show in 1967.

“The one thing he insisted on was giving more value for their money and always give clean, wholesome family entertainment,” Diehl said.

The show’s business model requires 2,500 people per day for the 100-day season to make a profit. With the show suffering a complete loss of revenue from the cancellation of the 2020 show season due to COVID-19, and an estimated cost of a million dollars in expenses to start show back up again, Diehl didn’t see the business recovering from the loss.

“When you’ve put 54 years of your life into this family business, it certainly isn’t the way we want to end the 70-year run of the show,” Diehl said. “But in business, you can’t make emotional decisions. You have to make decisions based on the facts and there’s no way I could see between now and next year that we would have any chance of having things back to normal.”

The 75-year-old Diehl said he will still be involved in other aspects in the community and local government. He currently serves as a trustee on Lake Delton Village Board and serves on the Bank of Wisconsin Dells Board and Wisconsin Dells Visitor and Convention Bureau boards.

Diehl said revenue from the show is about $3.5 million in a normal year. With only the exploratory open, revenue was about $300,000 — enough for exploratory payroll.

The business is no stranger to uncertainty and having to overcome obstacles. In 2008, the show and the Dells area faced tragedy when floods drained Lake Delton. In the aftermath of the disaster, Diehl was a key player in helping refill Lake Delton and get the community back on track as a part of a task force with several state officials.

The uncertainty of the issue over a decade ago was a different matter compared to the significance of the COVID-19 crisis, Diehl said. If the virus isn’t under control, a vaccine takes a while to develop and then the public still may not feel comfortable going out in crowds, he said.

Diehl said Tommy Bartlett and the show helped put the Wisconsin Dells area on the map.

Tommy Bartlett, a television star in Chicago, started the show in the late 1940s as a traveling water ski show across the Midwest, he said.

It was when Bartlett conducted a show at the Madison Edge Water Hotel and another at the upper Dells area of the river, that Dells officials took notice and began the process of bringing the show to the area as a tourist attraction.

The first show along Lake Delton was in 1953. Diehl and his wife, Margaret, were hired by the show in 1967 to run the motel and trailer park where the exploratory now sits. Diehl later worked his way up to working at the restaurant and he ran the concessions at the show for seven years. He later ran the water skiing show.

Diehl said working with Bartlett was an “unbelievable experience.” Bartlett sold a 25% stake in the corporation to Diehl in 1978 to Diehl. He purchased the rest of the corporation from Bartlett’s estate when he died in 1998.

Diehl said his favorite memory is witnessing the reaction of the attendees inspired by the flips of the water skiers and other performers. Some adults attended the show as a child and then brought their own children and grandchildren. Some families had worked at the show for multiple generations.

“We were on our third generation of skiers, that’s how long we’ve been here,” Diehl said.

Longtime employee Bonnie Johnson, who grew up in Reedsburg and now lives in Madison, was a part of the show for 10 seasons. She held a variety of roles from ticket sales to management.

She said working with the staff was like one big family and everyone was supportive of each other. She was still processing the loss Sept. 16, which she said isn’t only hard for her but also the Wisconsin Dells area and the state.

“It is kind of like going to summer camp,” she said. “Some of my very close friends I met at Bartlett’s.”

Lake Delton Village Board President John Webb worked at the snack bar and his brother worked the parking lot. He also lives a couple of block away from where the show sits at 560 Wisconsin Dells Parkway.

“Tommy was always pretty good to everybody,” Webb said.

He was shocked to hear about the show closing.

“I grew up in this area and it’s been a staple for forever,” Webb said. “It’s pretty sad to hear that.”

Diehl said the show isn’t listed for sale, but that will have to happen eventually. He wanted to make the decision to close the show to hopefully attract someone else for the property — to either keep the show going or potentially turn it into something else.

“I sure hope we are able to find something because the attractions are what drives this economy,” he said.

Diehl said staple attractions, like the Dells Ducks, will continue to draw tourists to the area.

“Certainly, losing the show you lose a one of a kind live, outdoor entertainment,” he said. “There aren’t very many of these floating around.”

A restaurant in Baraboo is closed through Wednesday after an employee tested positive for the coronavirus.

Tom Diehl, president of Tommy Bartlett Inc., looks over the vacant amphitheater of the company's water ski show in Wisconsin Dells on Wednesday. After losing the 2020 season to the COVID-19 pandemic, Diehl said that the show portion of the business will be permanently closing after a 69-year run.

Kayla Garner and Eric Schroeder ski during the Tommy Bartlett Show Aug. 22. It was Garner's first time skiing in front of an audience.

Scooby and Christian known for run on TV's 'America's Got Talent,' perform at the Tommy Bartlett Show.

A Tommy Bartlett Show performer does tricks on a jet ski.

The stage area for the Water Ski shows put on by Tommy Bartlett on Lake Delton sits on the lake bottom after floodwaters breached the bank and drained the lake June 9, 2008.