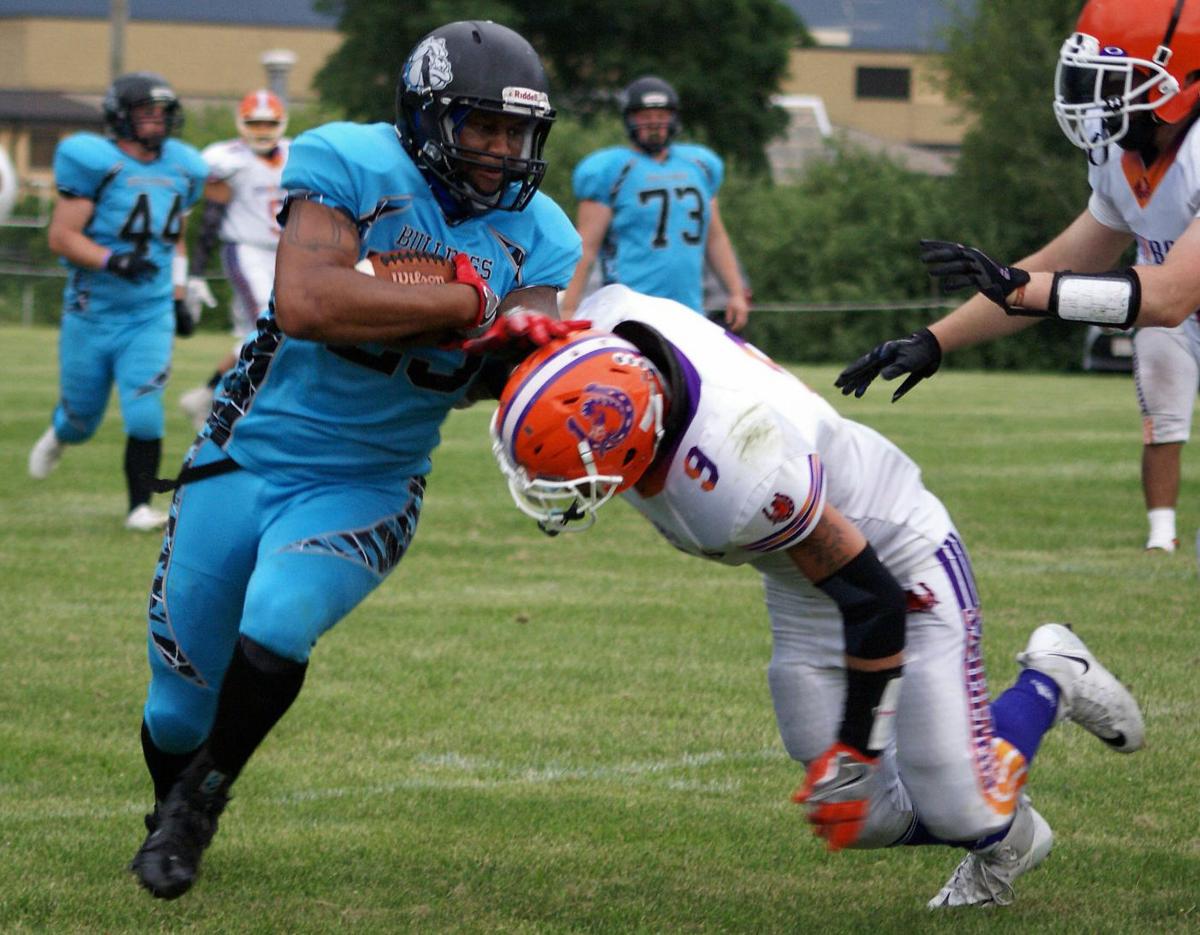 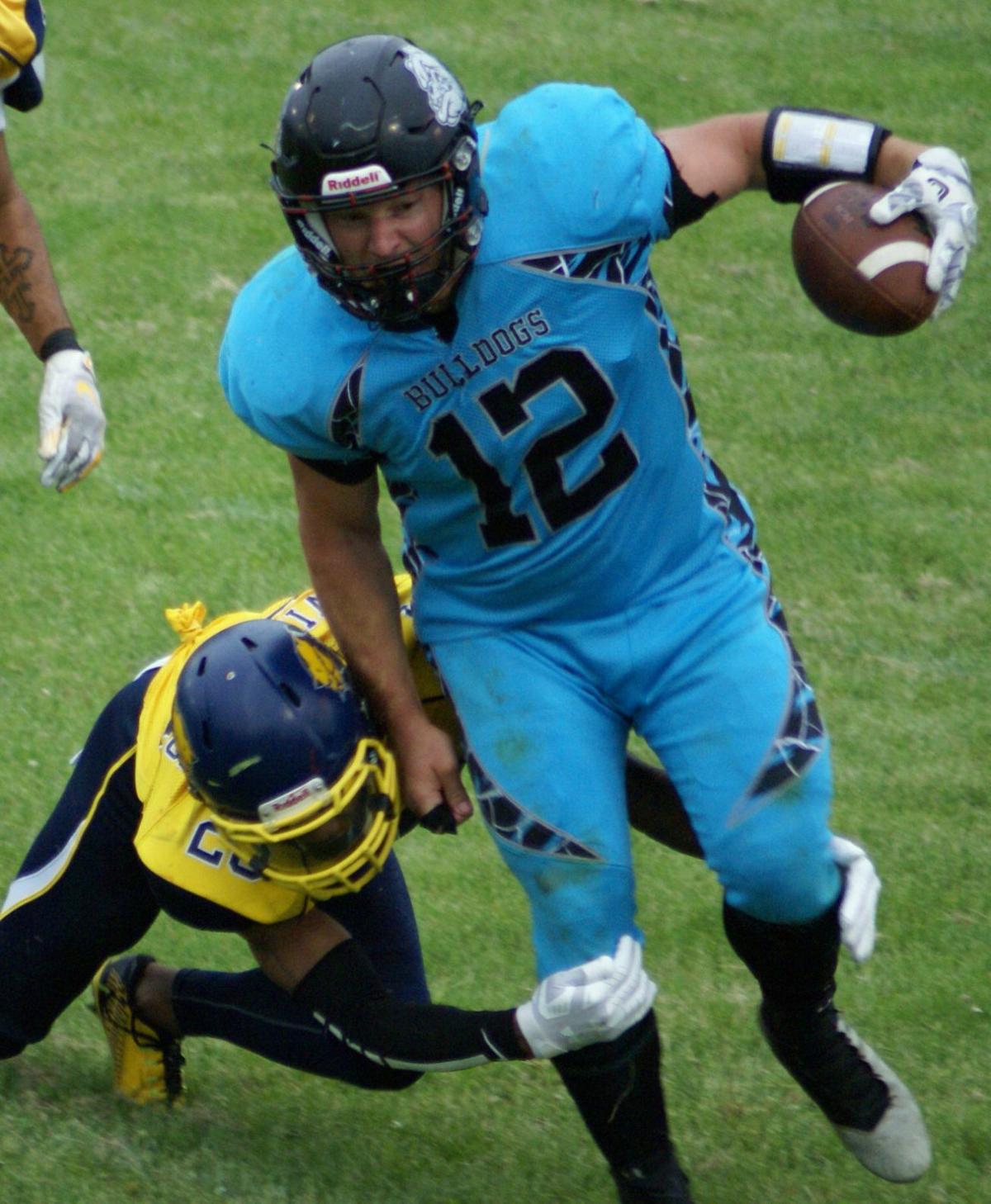 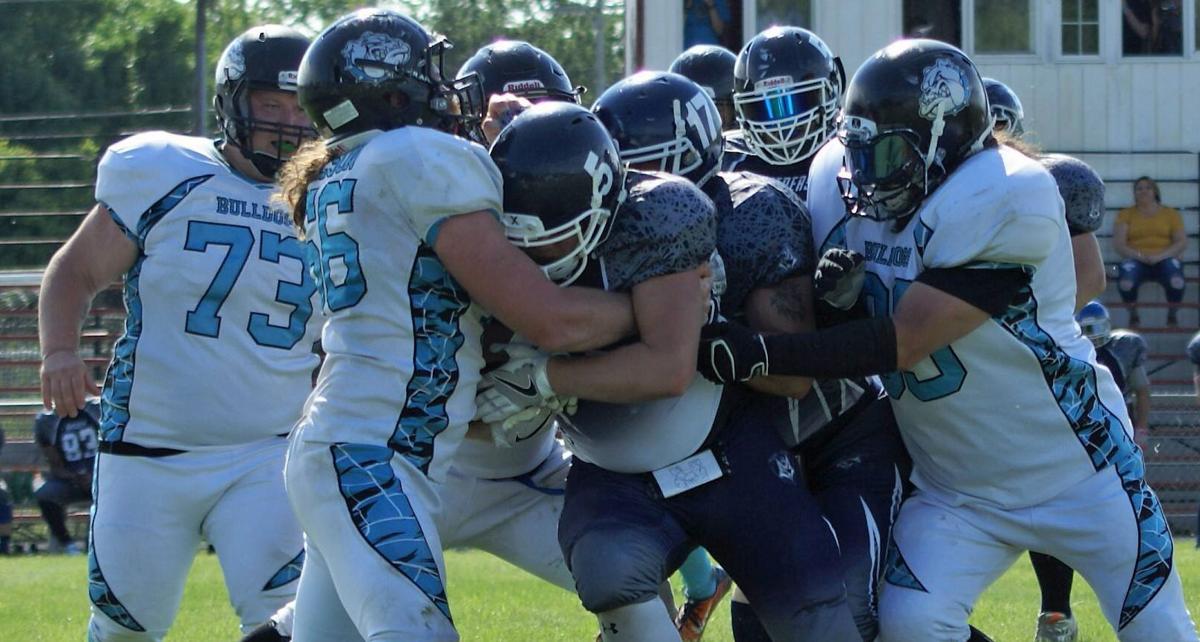 Tri-City Bulldogs' Thomas Halvorson (56) and Andrewy Hrycenko, right, combine for a tackle on a Fox River Raiders running back as Keegan Wastlick (73) runs in for support during a Norhtern Lights Football League game last season. 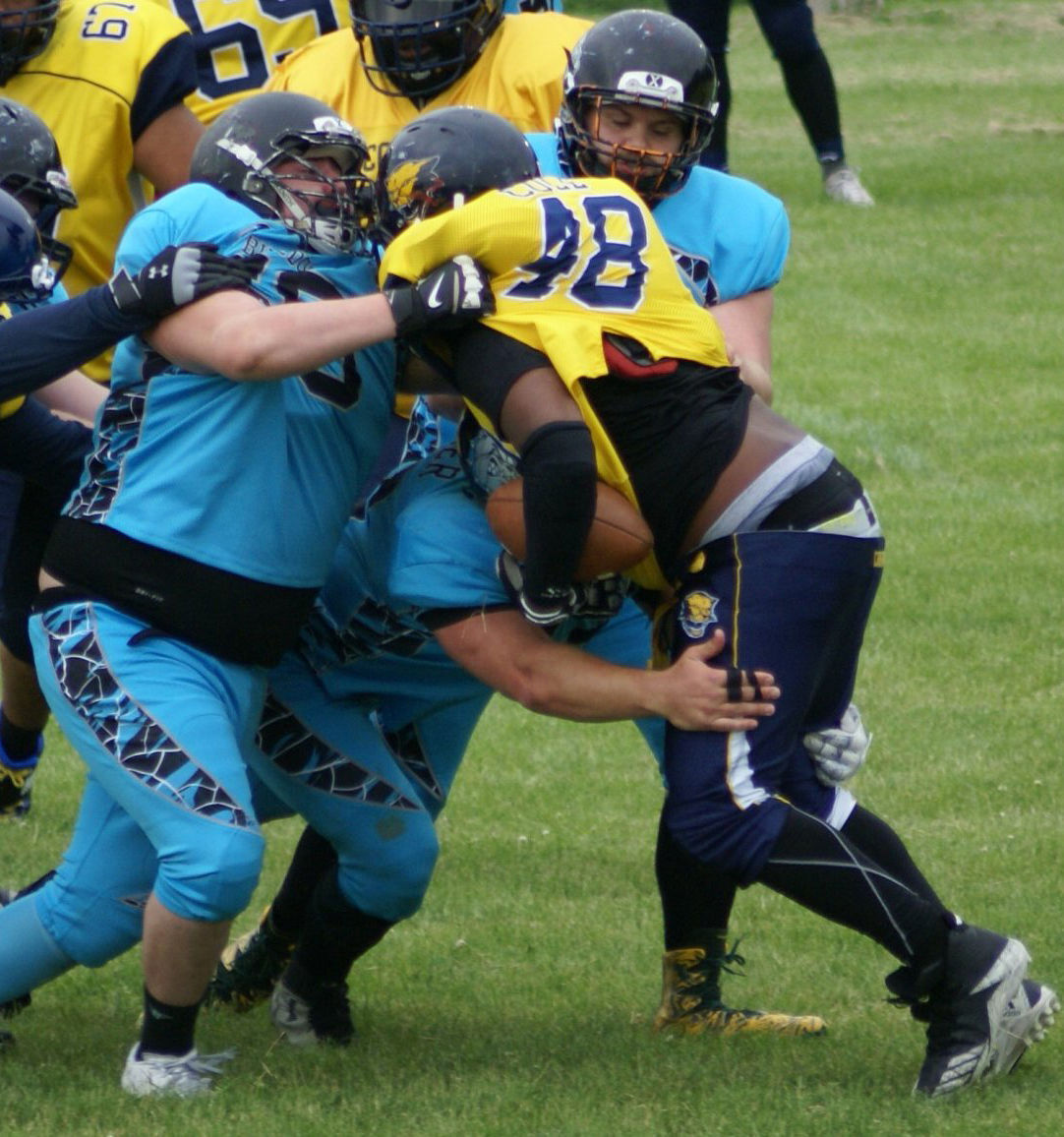 Tri-City Bulldogs' Josh Friant, left, leads a trio of defenders for a tackle on a Kenosha Cougars running back during a Northern Lights Football League game last season. 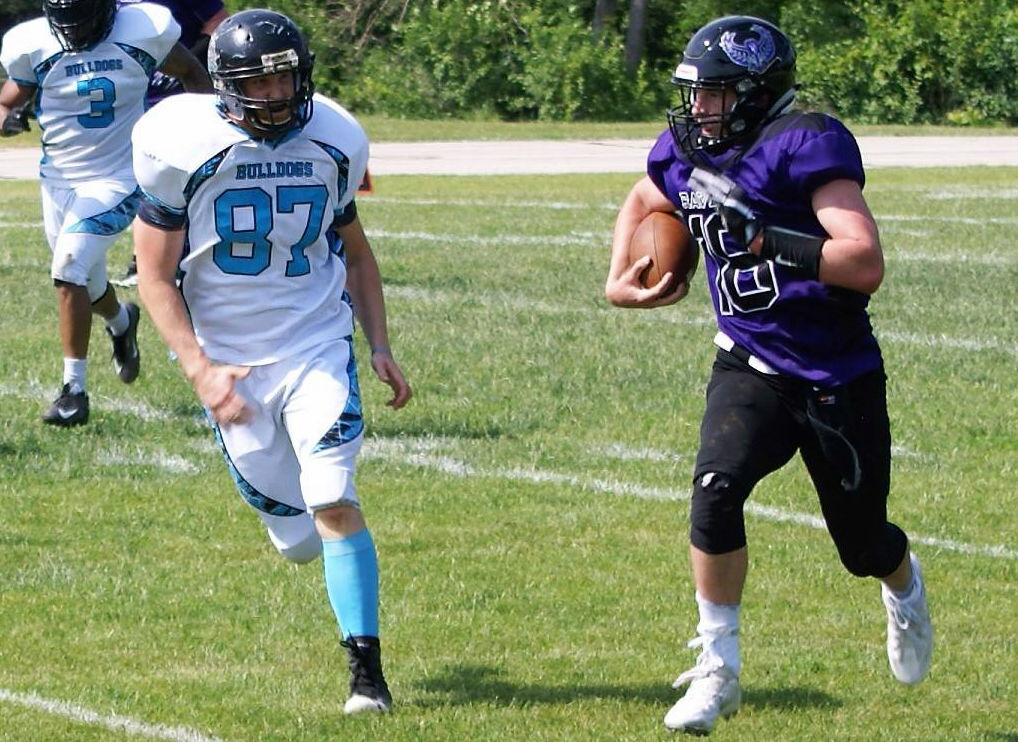 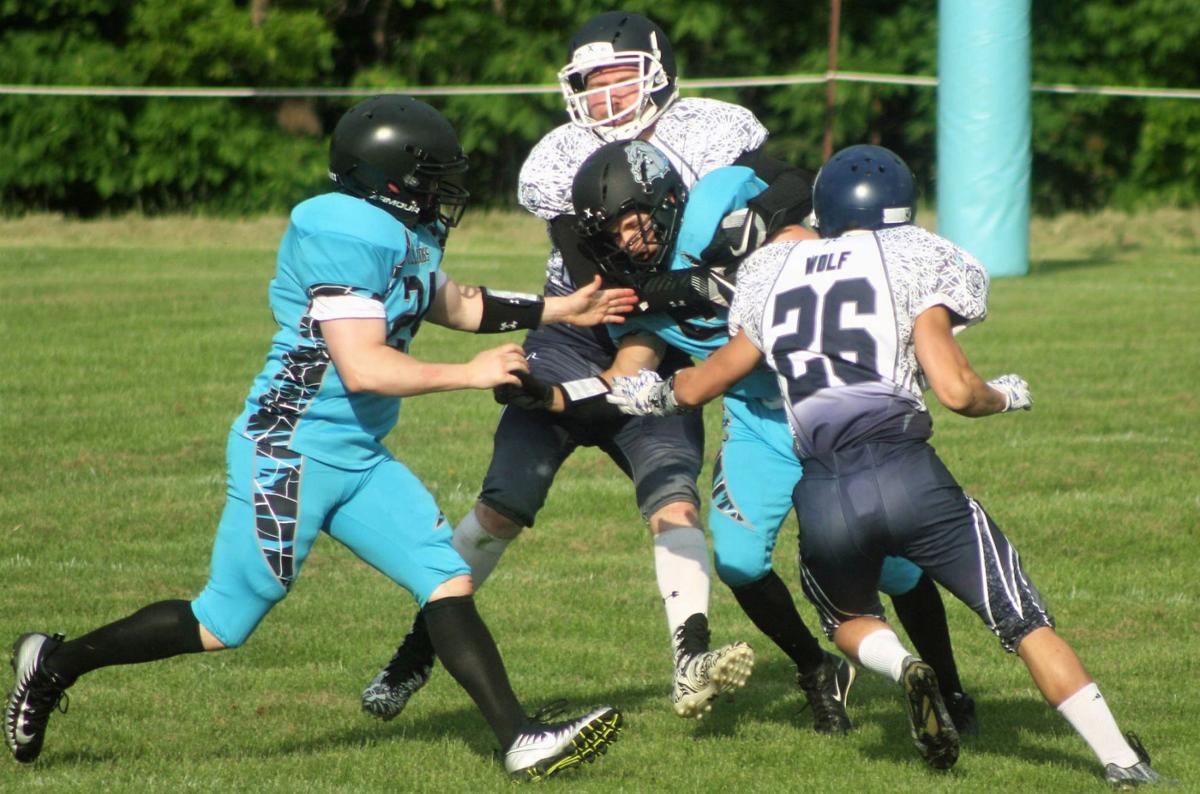 Tri-City Bulldogs' Sylvester Deitelhoff tries to slip through a tackle on a kickoff return during a Northern Lights Football League game against the Fox River Raiders last season.

In its 10 years of existence, the Tri-City Bulldogs semi-pro football team has called many places home, including Reedsburg, Princeton and most recently Cazenovia.

The Bulldogs have found another home this season, as they’ll play their home games for the upcoming Northern Lights Football League campaign at Pardeeville High School. Tri-City general manager Eric Bebber believes the new home will be the perfect fit for his team.

“I know Pardeeville has a great football community, and a good football program, so in terms of potential recruits that might be coming out of high school and not going to college, it was a smart move,” Bebber said.

Following a year-long hiatus in 2015, the Bulldogs played their home games at Princeton High School for two seasons before transitioning to Weston High School in Cazenovia last season. However, the Wonewoc-Center/Weston co-op prep football team is transitioning to eight-man football this fall. With the move to eight-man football, the school’s football team will play on an 80-yard by 40-yard field, forcing the Bulldogs to find a new home.

“We had to start looking into other fields in the area, and we actually have a couple players in the Portage-Pardeeville area, and they decided to (ask the Pardeeville School Board),” Bebber said.

With the move to Pardeeville, the team will also have an increase in its financial responsibility. After paying $230 a season for field paint at Princeton, the Weston School District charged Tri-City $250 per game last year.

“That gave us a better picture to what it was like to be a more competitive team to play with a higher budget,” Bebber said.

That amount doubled this season with the move to Pardeeville, as the Bulldogs will pay $500 per game, on top of the $250 fee for officials. Despite the increase on the financial toll, Bebber is confident the Bulldogs’ bankroll will grow in 2020.

Even in the midst of the COVID-19 pandemic, Bebber said the team’s numbers have grown significantly.

Bebber, who also serves as the Bulldogs’ owner, defensive and special teams coordinator, and utility player, took over as NLFL commissioner this season following a stint as league vice president last year. After having its usual May kickoff delayed due to the pandemic, Bebber said the seven-team league did its due diligence in weighing its options and have chosen to go on.

According to Bebber, the MidStates Football League, featuring semi-pro teams in Wisconsin and Illinois, is the only other known league in operation at this time. He believes that players have been flocking to the NLFL due to those decreased opportunities at playing.

“If you look back at the league’s Facebook posts, we were kind of on the fence, but I had said, ‘Everybody keep your mouths shut and let’s see what happens. Don’t tell your guys anything and let them know we’re working on it,’” he said.

“We just kind of kept everything on the hush and operated behind the scenes until we realized we were good to go, but if we don’t know, it’s now or never. With all those other leagues shutting down, it forced a lot of guys to look elsewhere.”

Bebber said the team’s typical game day roster featured 25 to 30 players, and the Bulldogs had 28 players at its preseason game against the Marshfield Bandits on July 18. Since then however, the Bulldogs have grown exponentially, adding another 15 to 20 recruits.

According to Bebber, most of the additions are completely new players, while some are former Bulldogs that have returned. The team, whose main core of players resides in Baraboo, Reedsburg, Portage and Mauston, has branched out as far north as Eau Claire and La Crosse, as well as Minneapolis, with some of its new players.

“We had one guy that came out back in March before the lockdown, and he was all for it saying, ‘Yeah man, I’d love to play. I’ll play wherever, I’ll do whatever.’ I kind of patted him on the back and that’s what we need,” Bebber said.

“He wound up bringing in four of his brothers, and then one of them started recruiting guys he’s played with in the past and I think that’s brought in about 12 guys.”

Due to the Upper Peninsula Arctic Blast pulling out of the 2020 season due to the delay, the NLFL will feature just one division this season with each of the seven teams playing a six-game schedule, with the top-four teams reaching the playoffs. The Bulldogs received the opening week bye, pushing back the team’s season opener to this Saturday against the Wisconsin Ravens.

The matchup against the Ravens is one of three home games in the Bulldogs’ opening four games, including contests against the reigning league champion Rockton Revolution (Aug. 29) and Kenosha Cougars (Sept. 12) sandwiched around a weekend off for Labor Day.

“As much as the guys were chomping at the bit and ready to go, I saw it could be a good thing because it gives us another week to prepare before going up against some of those teams that traditionally would beat the crap out of us,” Bebber said.

“We wound up with a couple of home games in a row, and having that bye week on Labor Day means we get a week off in between the two, but finishing up on the road (with two straight games) is probably what concerns me more.”

Bebber is hoping to break .500 and continue taking the small steps the Bulldogs have made under his leadership. He also believes fans will be drawn to come watch the action following Tuesday’s decision by the Big Ten Conference to cancel its fall sports season.

Bebber is confident the league is set up to succeed, despite the ever-changing landscape of the pandemic.

The Rockford Revolution, due to Illinois’ 50-person gathering limit, is playing all of its games at its opponent’s fields this year, and Bebber said teams are taking preventative measures. Along with other teams, Bebber plans to purchase an infrared thermometer, and city and county guidelines have been stressed.

“We kind of told them all, every state, every city, every county has different guidelines, so follow the guidelines for your team’s area, number one,” he said. “We’ve kind of addressed it and haven’t really given any mandate so to speak on anything, but we told teams it’s kind of up to them.”

Tri-City Bulldogs' Thomas Halvorson (56) and Andrewy Hrycenko, right, combine for a tackle on a Fox River Raiders running back as Keegan Wastlick (73) runs in for support during a Norhtern Lights Football League game last season.

Tri-City Bulldogs' Josh Friant, left, leads a trio of defenders for a tackle on a Kenosha Cougars running back during a Northern Lights Football League game last season.

Tri-City Bulldogs' Sylvester Deitelhoff tries to slip through a tackle on a kickoff return during a Northern Lights Football League game against the Fox River Raiders last season.